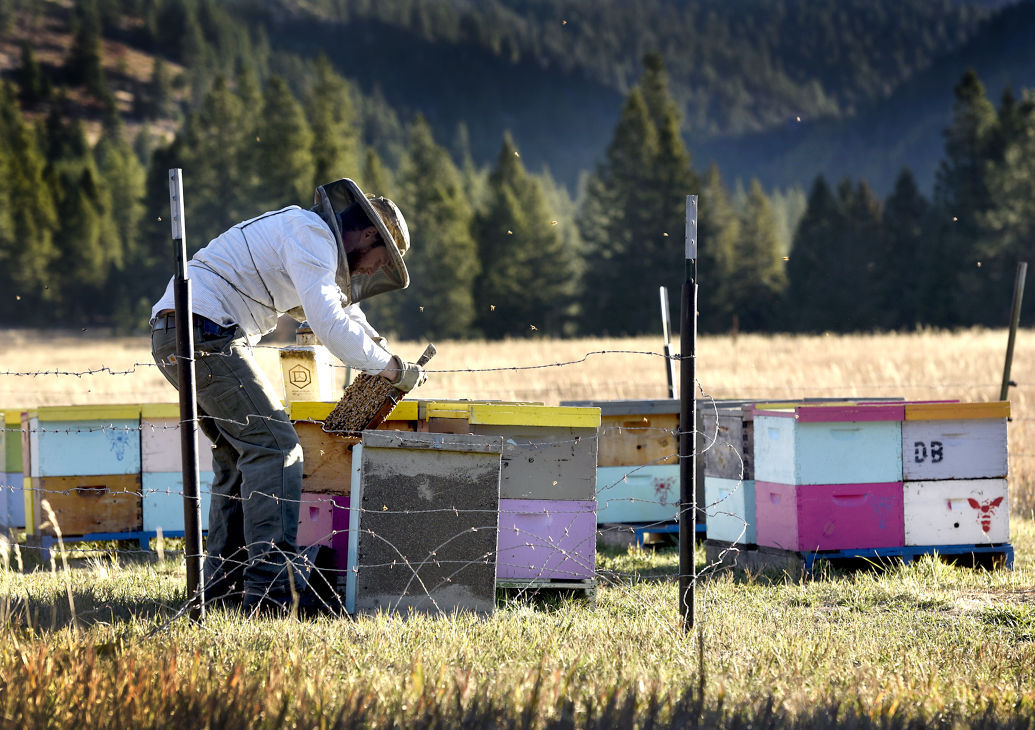 Sam Wustner, a second-generation beekeeper in Missoula, checks some of his hives last week in the Miller Creek Valley. The USDA recently announced the availability of $4 million in financial assistance to farmers, ranchers and forest land owners to help them improve food sources for honeybees on private land in six states, including Montana. 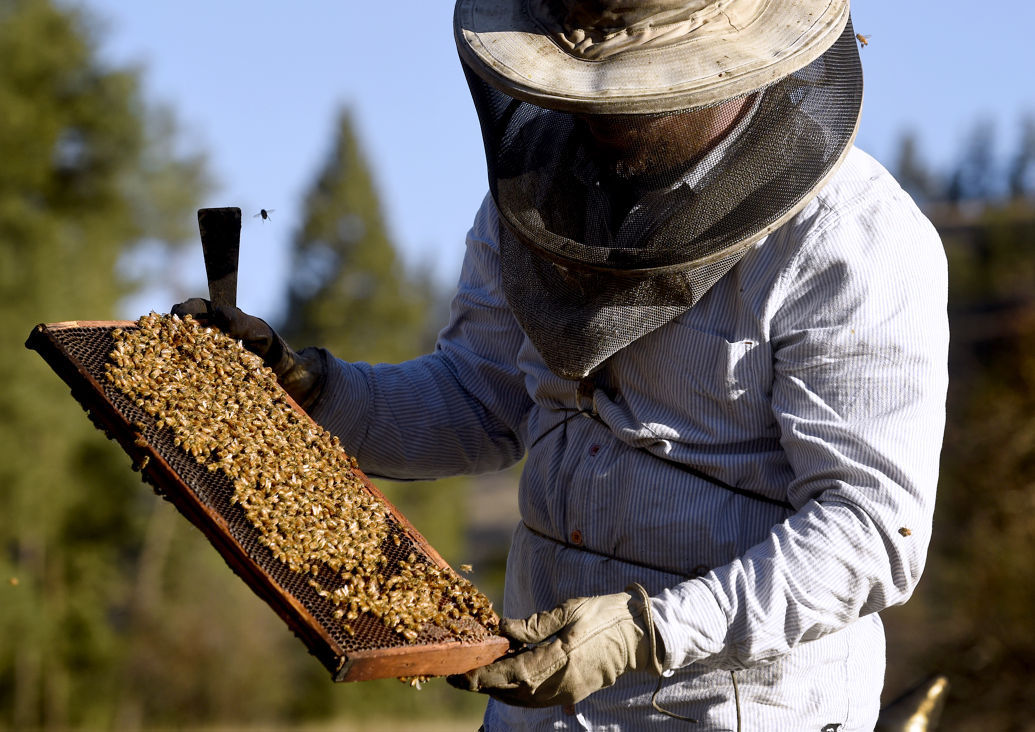 Wustner says his bees forage on knapweed and when people eradicate the weed, they should consider replanting with native wildflowers so the bees will still have a source of food.

Montana is the second-leading honey producer in the U.S., producing nearly 15 million pounds valued at more than $31 million every year.

Only North Dakota produces more honey, according to the U.S. Department of Agriculture.

It’s not just the honey that’s important, though.

Honeybees pollinate an estimated $15 billion worth of crops annually, including more than 130 types of fruits and vegetables. According to the USDA, one out of every three bites of food in America depends on honeybees and other pollinators, but honeybees have suffered significant declines in recent years.

Researchers have attributed the decline – estimated by the Center for Research on Globalization to be 30 percent of all colonies in the last 10 years – to widespread pesticide use, habitat destruction, global warming and parasites.

Greg Fullerton is president of the Montana State Beekeepers Association and a second-generation beekeeper near Babb who owns Glacier County Honey with his wife Courtney.

He said that his honey crop suffered this year due to pests and dry conditions.

“For the first time in 10 years, I let my pest load get too high, and my bees suffered,” he explained. “It was bad management. And this year, being as dry as it was, the honey crop suffered as well. It was because of both factors. The last few years were wet enough that colonies had been in better shape. We have a saying in agriculture: There’s always next year.”

The U.S. government has been trying desperately to reverse the decline of bees because they're so important to the country’s food system and economy.

Last week, the USDA announced the availability of $4 million in financial assistance for farmers, ranchers and forest landowners to help them improve food sources for honeybees on private lands in six states: Michigan, Minnesota, Montana, North and South Dakota and Wisconsin.

From June to September, this six-state region is home to more than 70 percent of the commercially managed honeybees in the country.

The money is provided by the USDA’s Natural Resources Conservation Service, and was expanded into Montana this year because of what the agency calls “the state’s prominent role in honey production.”

The money aims to improve the health of critical pollinators by allowing landowners to make bee-friendly conservation improvements to their land, such as planting cover crops, wildflowers or native grasses and improving management of grazing lands. The summer months are when bee colonies need abundant and diverse forage to store enough food to survive the winter.

The program is two years old, and it has boosted available food for bees on around 35,000 acres.

“The future of our food supply depends on honeybees,” said NRCS director Jason Weller. “This effort partners with farmers, ranchers and forest landowners to ensure honeybees have safe and diverse food sources during a time when they need it most.”

According to the USDA, planting cover crops like buckwheat, mustard, clover and sunflowers provides high-quality food for bees and also increases soil nutrients, breaks pest cycles and increases organic matter in the soil.

The NRCS also works with landowners to ensure pasturelands and rangelands include a high percentage of legumes, forbs and shrubs that also provide pollen and nectar.

Fullerton and his wife churn out about 150,000 pounds of honey every year, which makes them a relatively small commercial operation.

He said that because of economic conditions, many farmers are choosing to abandon the Conservation Reserve Program, a USDA initiative that pays farmers and ranchers a yearly rental payment in exchange for removing environmentally sensitive land from agricultural production or planting cover crops or native plants on high-erodible cropland.

“CRP acreage is being yanked out and being put into wheat or barley,” he said, “which in turn hurts honey production. You are losing some of the forage. Wheat prices have fallen but cattle prices are up, so the available source of bee pasture is greatly diminished.”

Sam Wustner, a second-generation beekeeper in Missoula who maintains hives for Wustner Brothers Honey, said the vast majority of the land surrounding his hives is public land and his bees forage on knapweed and wildflowers.

He said efforts to remove knapweed are understandable because it is an invasive species, but it hurts honey production, as knapweed produces great honey. He said people should consider planting native wildflowers instead of just taking out weeds.

“There should be less of a focus on eradicating weeds and more of a focus on planting forage crops,” Wustner said. “Native wildflowers benefit the whole ecosystem, not just pollinators.”

Wustner added that nobody is in the honey business to get rich, and if he didn’t rent out his bees to California almond growers to pollinate their trees every winter, he wouldn’t be able to make it as a beekeeper.

Fullerton said that because the state’s honey production depends so heavily on alfalfa fields, anything that can preserve these crops will be a small economic boon.

“We’re fortunate to have any of those programs and anybody worried about bees should support them,” he said.

For the next week, trees across the University of Montana campus will be wearing price tags showing off the value they provide to the school.

Sam Wustner, a second-generation beekeeper in Missoula, checks some of his hives last week in the Miller Creek Valley. The USDA recently announced the availability of $4 million in financial assistance to farmers, ranchers and forest land owners to help them improve food sources for honeybees on private land in six states, including Montana.

Wustner says his bees forage on knapweed and when people eradicate the weed, they should consider replanting with native wildflowers so the bees will still have a source of food.