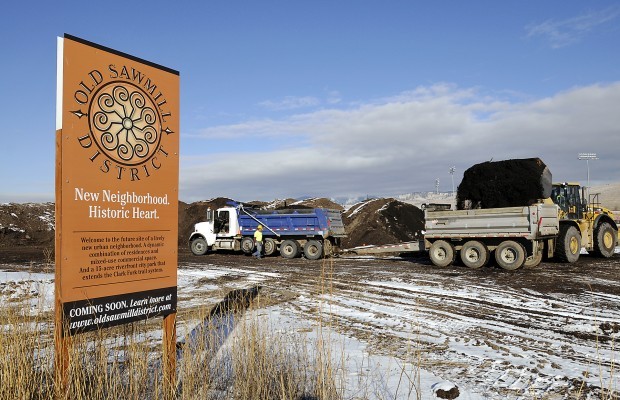 Much of the wood waste being removed from the site is being hauled off to make compost, which will return as material for the park. Other materials like concrete and asphalt are being recycled for use on site, also. 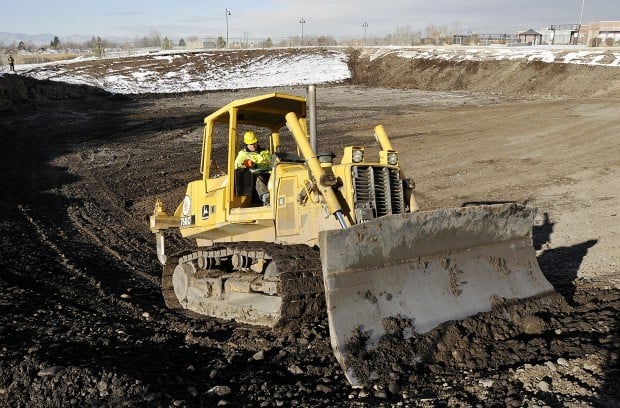 Monte Meskimen of LS Jensen Construction grades the sides of a large pit where wood waste from an old log pond was removed at the Old Sawmill District site in Missoula recently. Removal of the material, which was producing methane, and bringing back in clean fill was another step in the years-long remediation of the former millsite.

By JENNA CEDERBERG of the Missoulian

The last of the wood waste has left the Old Sawmill District site.

Now, as the once-contaminated land is prepped for building, developers are turning to China for money to get the first phase of the $200 million project off the ground.

In exchange, the Chinese investors have the opportunity for a substantial return and a fast track to U.S. citizenship.

“Starting three years ago, we recognized with the way the economy was, we were going to have to look for creative and alternative ways to finance building development in the Old Sawmill District. The opportunity came up with Arnie (Sherman) and it just seemed to make a lot of sense,” Ed Wetherbee said.

Wetherbee and partner Kevin Mytty founded Millsite Revitalization Project LLC more than eight years ago to begin cleaning up the 45 acres that were once home to the Champion mill west of the Orange Street Bridge.

Wetherbee is also the co-founder, along with Sherman, of the Northern Rockies Regional Center. The center was launched and approved last April to offer so-called EB-5 Immigrant Investor visas, which allow high-net individuals to obtain visas to live in the U.S. in return for investment in American projects. Each investor must pledge at least $500,000 to a qualifying project that will produce jobs in the area.

The Rockies Center has found a handful of Chinese investors who are interested in putting money into the Old Sawmill District. At least four potential investors from China are planning a trip to Missoula this spring.

The Rockies Center works to find investors around the world for Montana projects, and opened an office in the coastal city of Zhu Hai, China, to take advantage of wealthy people in that growing country who have shown an interest in American projects.

“China is very well organized; there are almost 600 agencies in China that do EB-5 work,” Sherman said.

The Old Sawmill District project would be one of the first in the state financed by EB-5 investments.

Wetherbee and Mytty have spent years working to secure investments and government grants to clean up the site. Soil cleanup was completed in 2009. Work to remove wood waste, which was producing unhealthy amounts of methane, and prepare the site for building is now wrapping up.

The first development project calls for a 120,000-square-foot building with commercial and retail space on the first floor. Three floors above will include multifamily living space, where a mix of tenants looking for a premiere space to rent can move in.

“We’re looking at what might otherwise be first-time homebuyers. I think there’s a real market for that,” Wetherbee said.

Two buildings are planned for the first phase of development. One or both could begin once investors are secured, Wetherbee said. Each will cost between $15 million and $20 million.

Chinese investors like Missoula because it’s a university town in a state with a budget surplus.

In general, many want to take advantage of the school system here, Wetherbee said.

“Their holy grail is to have their kids go to school in the United States,” he said.

Earning citizenship is contingent on the project’s success in creating jobs.

Projects funded by EB-5 investors must create 10 jobs per investor. Once an investor commits capital, they apply for temporary permanent residency. After two years, the job creation of the project is evaluated before permanent residency is awarded, Sherman said.

Each investor is fully vetted by U.S. Citizenship and Immigration Services.

“People want to think it’s somehow a goofy kind of thing; really, it’s a very good, normal, documented investment,” Wetherbee said. “Just like anything else, it’s really important for us to make investments for people that we can be proud of and they can do well in.”

The EB-5 program is revenue-neutral for the government, Sherman said. The center can’t take money from investors, and benefits only if the project succeeds.

“Our fees basically will come from interest return and investment return that the investor gets. We’re making the same bet,” Sherman said.

The initial buildings would anchor the development, which altogether would include more than $200 million in development. Sherman said the plan is that EB-5 investments will factor into each subsequent project as the site is developed.

There aren’t any EB-5 investors signed up yet, but if the visitors from China like what they see this spring, the first building project could begin next year.

More than $8.5 million of public money already has gone into the Old Sawmill District, and more is on its way, according to the Missoula Redev…

Workers are making a push on the final cleanup at the Old Sawmill District with a goal to have the Montana Department of Environmental Quality declare the remediation complete this coming summer.

"There's so much good coming out of it, taking this old, ramshackle site and turning it into something viable. It's just wonderful," said Alan White, construction projects coordinator with the Missoula Parks and Recreation Department.

Much of the wood waste being removed from the site is being hauled off to make compost, which will return as material for the park. Other materials like concrete and asphalt are being recycled for use on site, also.

Monte Meskimen of LS Jensen Construction grades the sides of a large pit where wood waste from an old log pond was removed at the Old Sawmill District site in Missoula recently. Removal of the material, which was producing methane, and bringing back in clean fill was another step in the years-long remediation of the former millsite.