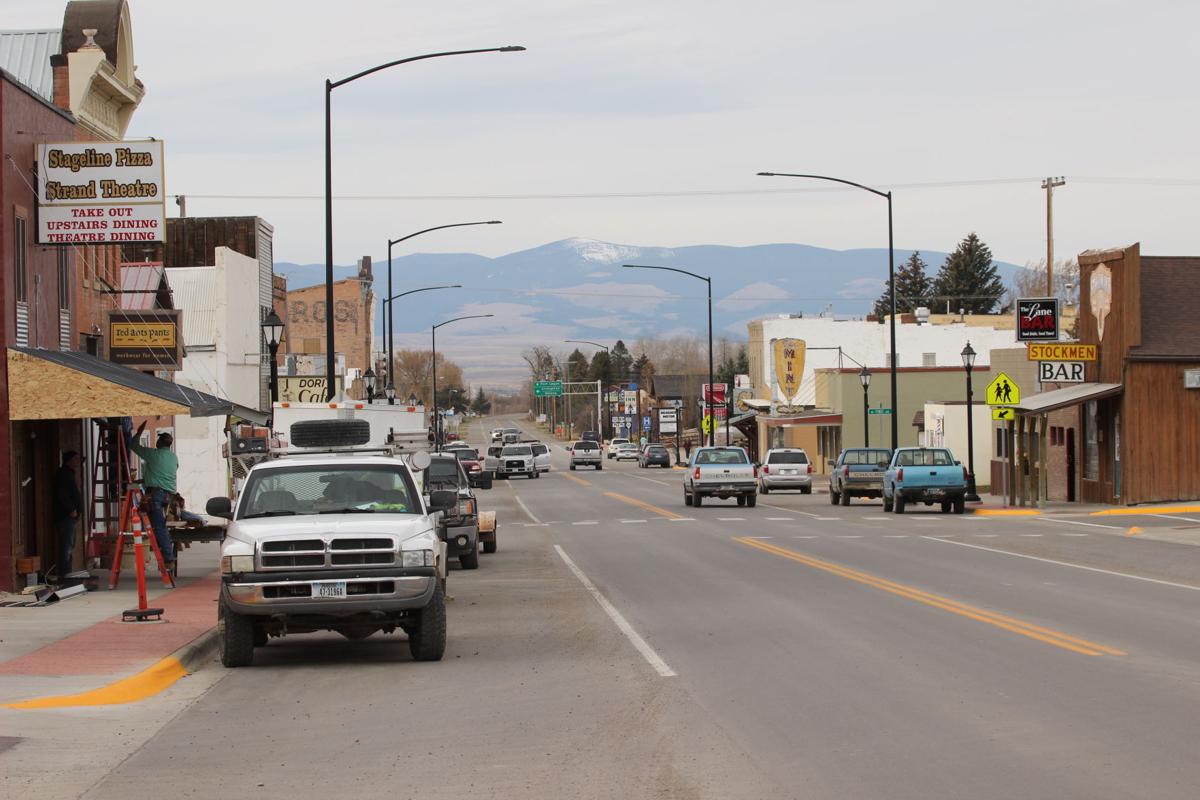 Crews install a new pavilion at Stageline Pizza in White Sulphur Springs. The business, along with several others, secured grant funding to upgrade store fronts as part of a multi-year revitalization effort. 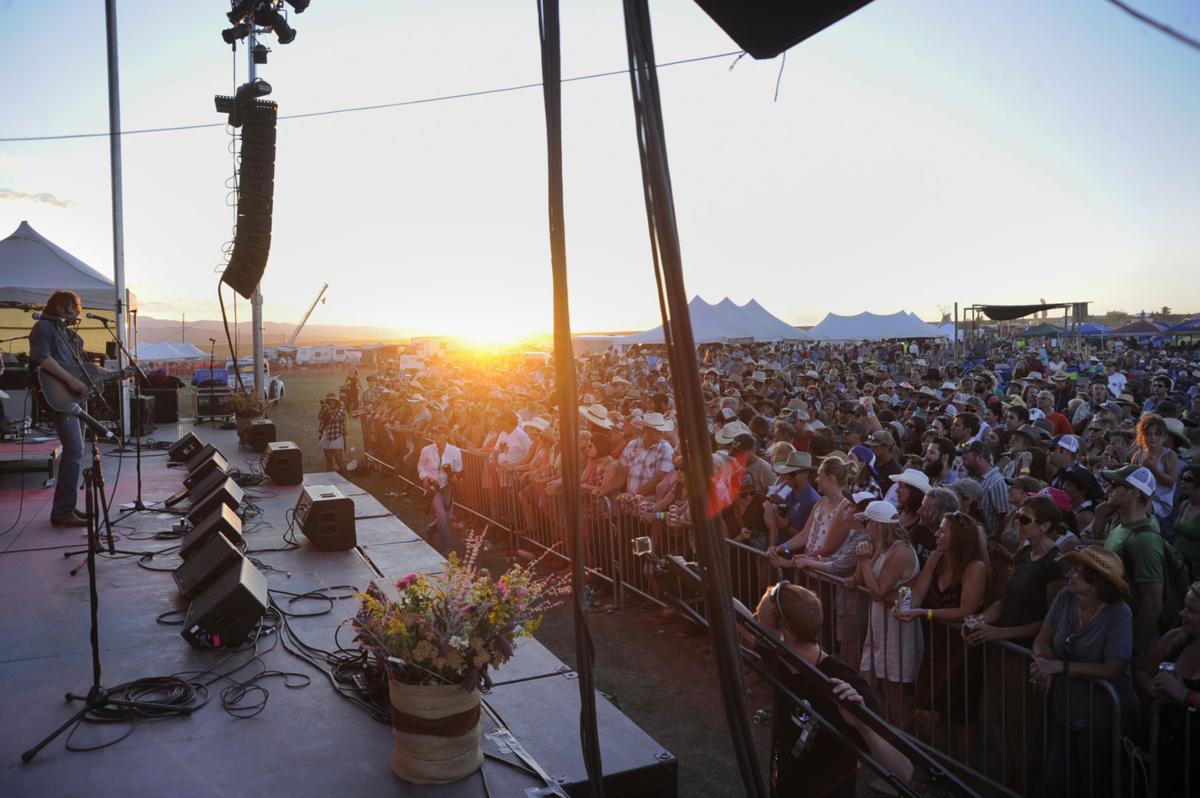 The Red Ants Pants Music Festival grew out of a small storefront in  White Sulphur Springs.

WHITE SULPHUR SPRINGS – The new streetlights are on in White Sulphur Springs and illuminating years of work to update infrastructure and revitalize the community’s main street.

Five years ago city officials embarked on major upgrades to the town’s water tank and water and sewer lines. Those projects needed to coincide with new highway construction by the state as Mayor Julian Theriault and the city council began the search for much needed funding.

“You have to sell your taxpayers in town that this has got to be done, and half our town was on Social Security so you can see that’s not an easy sell,” he said. “The infrastructure in this state for small towns is really tough. We use the same engineers as Great Falls does and they charge the same price but we don’t have the same tax base.”

With White Sulphur’s population of about 900 and only 1,500 in Meagher County, the city knew it needed to seek grant funding. Theriault and others worked with the state, he testified before the Legislature several times and contacted U.S. Sen. Jon Tester to find grants.

More than half of the over $3.5 million in projects was offset by grants from the Treasure State Endowment Program, DNRC and the Army Corps of Engineers.

“When we put all our plans to the town, they said, ‘It has got to be done, so get it done,’” Theriault said, while adding praise for both the Montana Department of Transportation and state grant writers. “So don’t thank the city, thank the taxpayers because they’re the ones that supported this.”

Theriault, 81, drove slowly through his town pointing out construction at the school and the many projects to revitalize city parks and buildings. Red brick and new landscaping complement the county courthouse, while new sidewalks line the gradual climb of downtown.

“I think the attention brought to White Sulphur by this has gotten the attention of people that maybe want to come to a small town and open a small business,” he said. “If they see that you’re building a new school and new highway, they’re going to want to move there. You’ve got to get your city in line before anything happens.”

Several new businesses have sprung up in the last year, including a brewery and sporting goods store, and existing businesses have also stepped up by updating storefronts, said Chris Hedrich, the local representative for SCORE, which mentors small businesses and also facilitates grant funding.

Grants have gone to five businesses to update signage and improve the outside appearance for customers.

“What draws people to town is you’ve got to have something attractive,” she said. “A lot of people have taken ownership of saying, ‘Let’s spruce up the faces of our businesses a little bit to make them appealing.’”

Hedrich is the co-owner of Two Basset Brewery, which opened about eight months ago. Realizing that the community alone would likely not provide enough customers, they knew the business depends on people coming through town.

White Sulphur has struggled for years economically as important timber jobs evaporated, she said. While it has long been a stop for hunters, skiers, visitors to the hot springs and Smith River floaters, promoting the town as a tourism destination and short drive from nearby cities such as Helena, Bozeman and Great Falls is becoming an economic priority.

“We’ve had all of this, but for whatever reason no one really put it all together,” she said of the outdoor amenities. “Through this revitalization, we’ve got a really good thing going.”

Hedrich credits one successful business and another proposed business for catalyzing the revitalization.

When Red Ants Pants opened a decade ago in an old storefront, many in the community wondered if it would survive. As owner Sarah Calhoun successfully grew her business and the Red Ants Pants Music Festival now brings thousands of visitors to White Sulphur every summer, “I think it gave the community a little bit of hope for what can happen here,” Hedrich said.

The proposed copper mine by Tintina Resources has also offered some economic inspiration for the community, she said. While the mine is currently seeking a permit from the state and faces opposition from several conservation organizations, it would employ more than 200 people.

Perhaps the signature of White Sulphur’s revitalization are the antique-style lamp posts anchoring the new sidewalks. As the city worked on infrastructure, the $100,000 needed for the lamp posts became the passion of the chamber of commerce, which launched a fundraising campaign.

“We started raising money and it was just amazing how fast it came in,” said chamber President Kelly Huffield.

The campaign allowed people and businesses to sponsor individual lights, with several going as memorials for lost loved ones. Businesses and former residents bought lights, and even a hunter who makes a yearly trip to Meagher County contributed.

“It still amazes me how it went and now each light tells a story,” Huffield said.

A White Sulphur alumni fundraiser at the senior center brought in the last quarter of the needed funding. The lights became a sense of community pride, Huffield said, as has the many projects throughout the town.

When the lights finally arrived it was an emotional experience unpacking them and ultimately seeing them turn on for the first time.

“Everyone has been so excited and thrilled with how Main Street has come out,” she said. “We’ve really worked hard on just a lot of little things and we’ve seen things starting to happen. It shows what a caring, giving, strong community we have here.”

Crews install a new pavilion at Stageline Pizza in White Sulphur Springs. The business, along with several others, secured grant funding to upgrade store fronts as part of a multi-year revitalization effort.

The Red Ants Pants Music Festival grew out of a small storefront in  White Sulphur Springs.