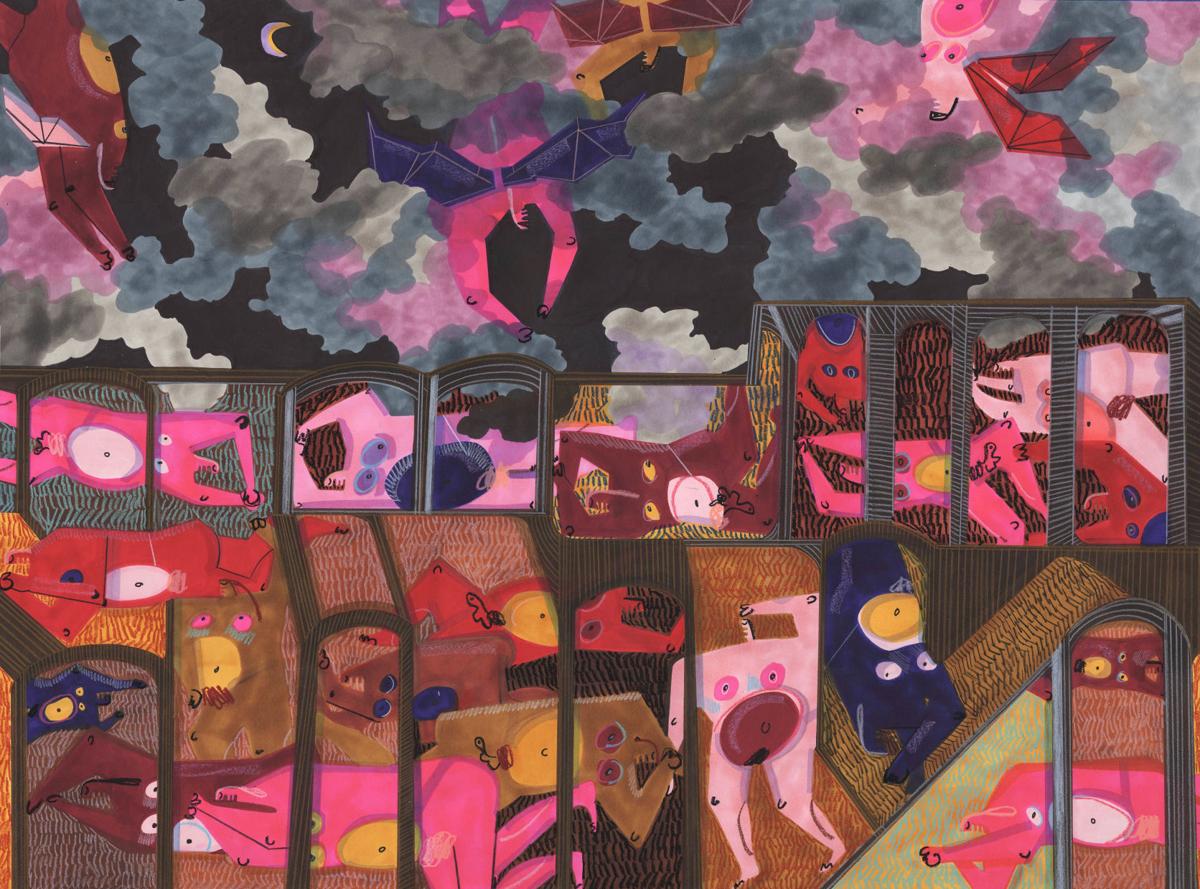 Andrea Joyce Heimer, "As Teenagers We Tried to Practice Astral Projection While Sleeping So We Could See Each Other In The Night And Fly Around Town, Up Above The Streets," (2021, marker and oil pastel on paper, 30 by 40 inches). 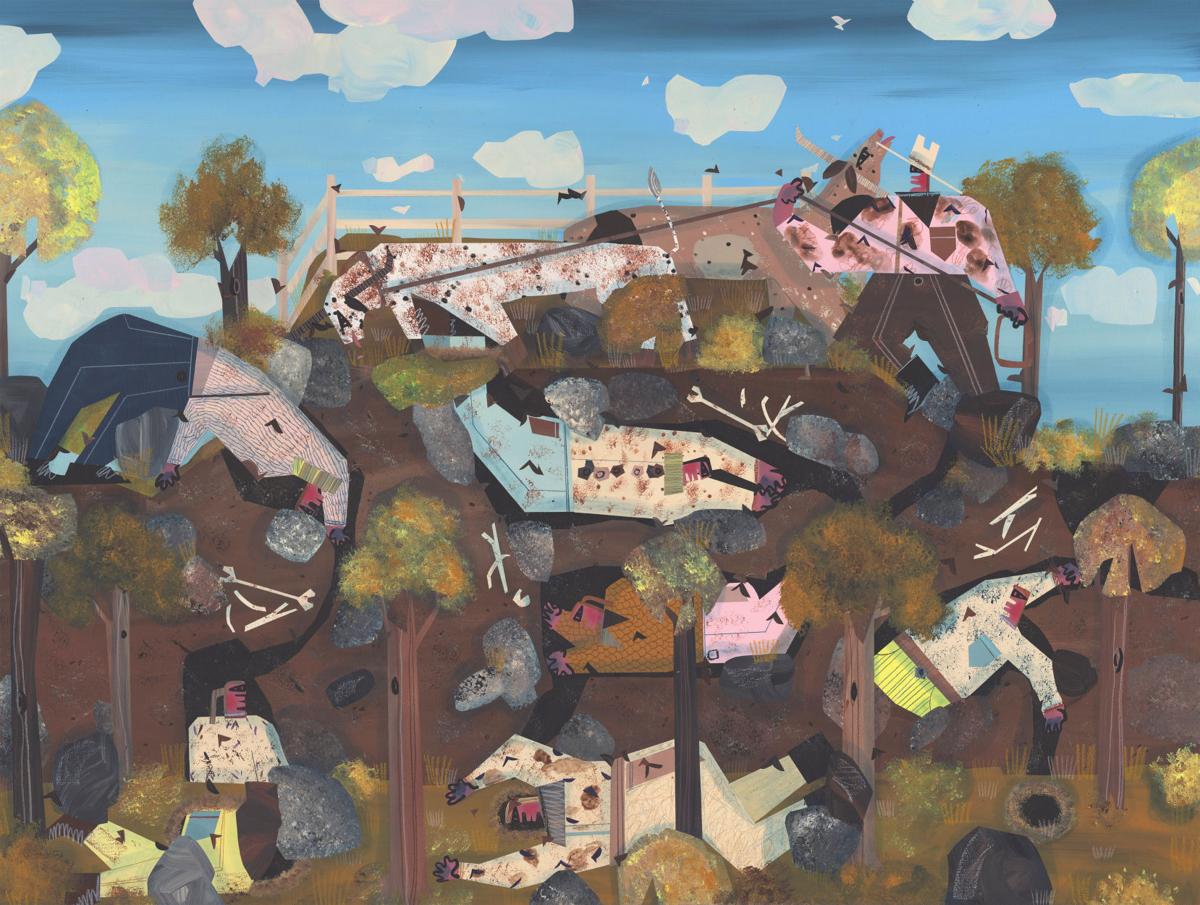 Andrea Joyce Heimer, "We Hunted For Fossils In The Cow Pastures All Around Great Falls Montana To Find Out What Used To Live There, Before Us," (2021, acrylic and oil pastel on canvas, 30 by 40 inches) 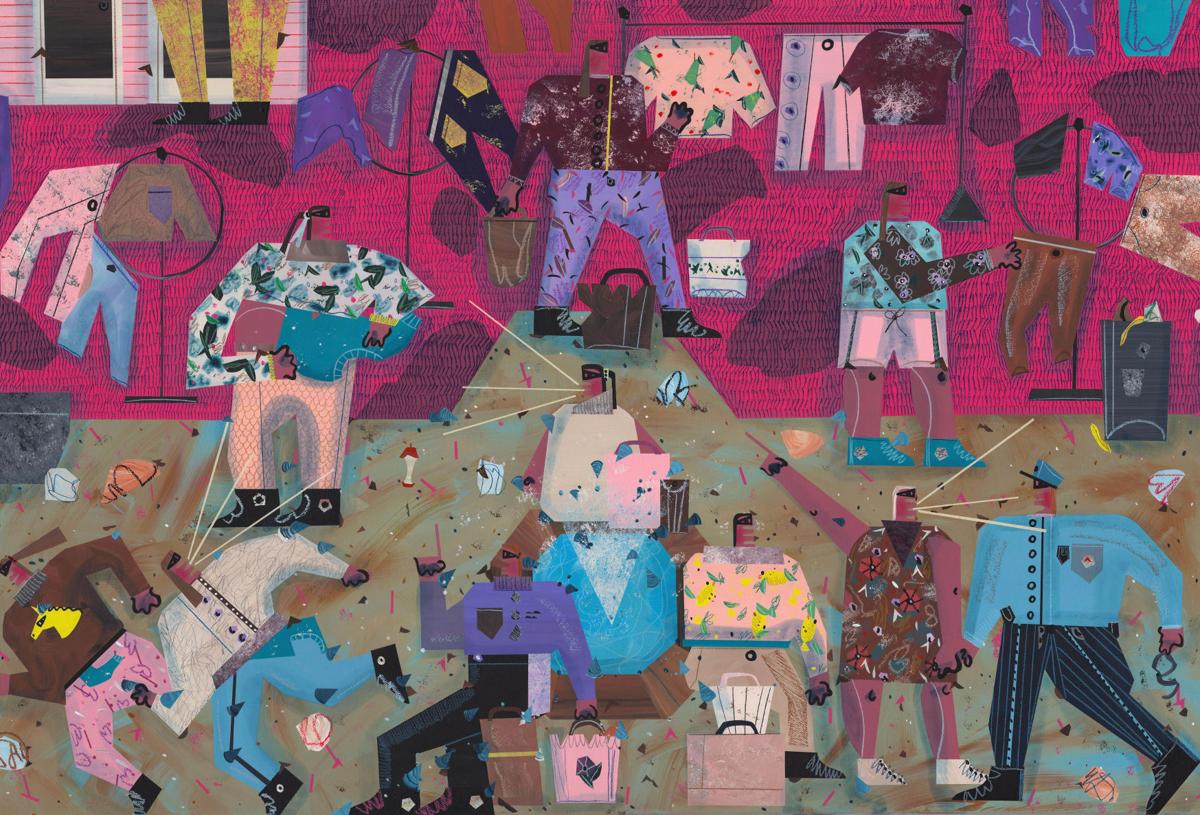 Andrea Joyce Heimer, "Sometimes We Shoplifted At The Mall," (2021, acrylic and oil pastel on canvas, 24 by 36 inches)

Abby Lynes for the Missoulian

Andrea Joyce Heimer’s work asks you to remember a skill often forgotten in the hubbub of adult life.

“As a kid, we whiled away days and didn’t think anything of it,” she said.

Heimer’s exhibit “Pastime,” on display at the Missoula Art Museum, explores seemingly mundane childhood and adolescent experiences. As life went on hold at the beginning of the pandemic, she found herself wondering “what we were doing when we weren’t doing anything.”

Much of Heimer’s work centers around everyday experiences she had growing up in Great Falls, like flipping a coin into a fountain or shoplifting from the mall. Each of her long titles reads like a diary entry, she said, and her work has allowed her to process some of the loneliness and isolation she felt growing up as the child of a closed adoption in a rural state.

While Heimer’s work explores the mundane as a theme, her style is anything but. Her paintings feature vivid, matte colors with exaggerated, angular and lively figures in often action-packed scenes.

MAM senior curator Brandon Reintjes described it as a story within a story, with a narrative that weaves back and forth.

“There’s something really compelling because they’re narrative,” he said. “It’s kind of a different type of storytelling.”

This is the first time Heimer’s work has been shown in Montana. An accomplished artist based in Bellingham, Washington, she was mostly self-taught in earlier stages of her career, before earning an MFA from the New Hampshire Institute of Art. She is pursuing a doctorate in art pedagogy, and her work is shown mostly in galleries in Los Angeles and New York City as well as all over the world.

She didn’t get an undergraduate degree in art, and the last art class she took in high school was her sophomore year — she got kicked out for arguing with the teacher, she said. Her introduction to the art world didn’t come until her mid-20s, when she started going to therapy. Her therapist suggested she start painting and drawing again, something she liked to do when she was younger as a way to process some of her more difficult feelings surrounding life experiences.

When she first started painting, she tried to paint very realistically, she said, because she “thought that’s what you’re supposed to do.” She got frustrated very quickly, though, and decided to go back to painting how she did when she was younger.

She grew up doing a lot of crafting, something she bonded with her grandmother and mother over. Her family had a kiln, and they would work on all kinds of projects growing up. MAM associate curator John Calsbeek said that when Heimer’s father saw the exhibition, he said she would use up all the family’s masking tape as a child, something she still does, along with other crafting techniques like sponging.

Heimer works on her art for at least 40 hours a week, and she said she’s very meticulous. Her painting process is lengthy, and she likes to go back to a specific moment in time and spend a while there, until that moment becomes like a “friendly object” in a painting.

“Somewhere in there, healing happens,” she said.

Heimer still uses the same type of paint she used as a child — Delta Ceramcoat. She’s tried out all kinds of fancy acrylics, but she said she always comes back to the paint commonly found at craft stores, and she recommends it to fellow painters all the time.

That paint is layered in matte to come together to create a painting that covers the entire canvas, Reintjes said. Shadows work mainly to highlight figures, with her style borrowing from textiles, he said.

“Her work is almost anti-depth,” he said.

Her titles and method of storytelling are direct — Heimer isn’t pulling the wool over anyone’s eyes or hiding any secrets, he said. At the same time, there’s so much happening in each painting that the viewer can come back again and again and always see something new and remarkable.

“It keeps you questioning,” he said. “And I think that’s the fun part.”

“Pastime” will be on display at the MAM through Jan. 29. The MAM is open Tuesday through Saturday from 10 a.m. to 5 p.m. Admission is free.

Healing through art: Expressions of incarcerated youth on display at ZACC

The exhibit is titled “Shape of Us” and features art and writing about isolation, identity, family and more through the program Free Verse.

Betty White Tribute Movie to Air on Her 100th Birthday

Betty White Tribute Movie to Air on Her 100th Birthday

Andrea Joyce Heimer, "As Teenagers We Tried to Practice Astral Projection While Sleeping So We Could See Each Other In The Night And Fly Around Town, Up Above The Streets," (2021, marker and oil pastel on paper, 30 by 40 inches).

Andrea Joyce Heimer, "We Hunted For Fossils In The Cow Pastures All Around Great Falls Montana To Find Out What Used To Live There, Before Us," (2021, acrylic and oil pastel on canvas, 30 by 40 inches)

Andrea Joyce Heimer, "Sometimes We Shoplifted At The Mall," (2021, acrylic and oil pastel on canvas, 24 by 36 inches)