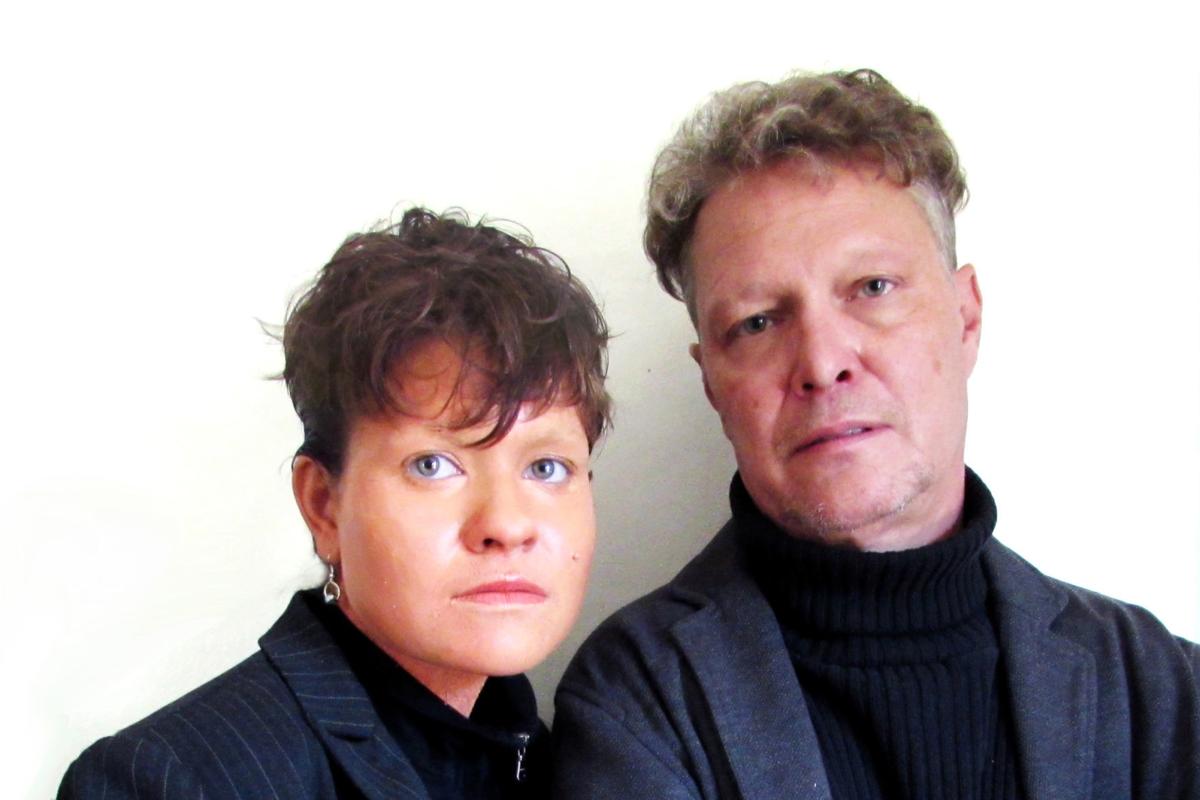 "Costuming Ethnic: The Artist and her Father," by Aja Sherrard. 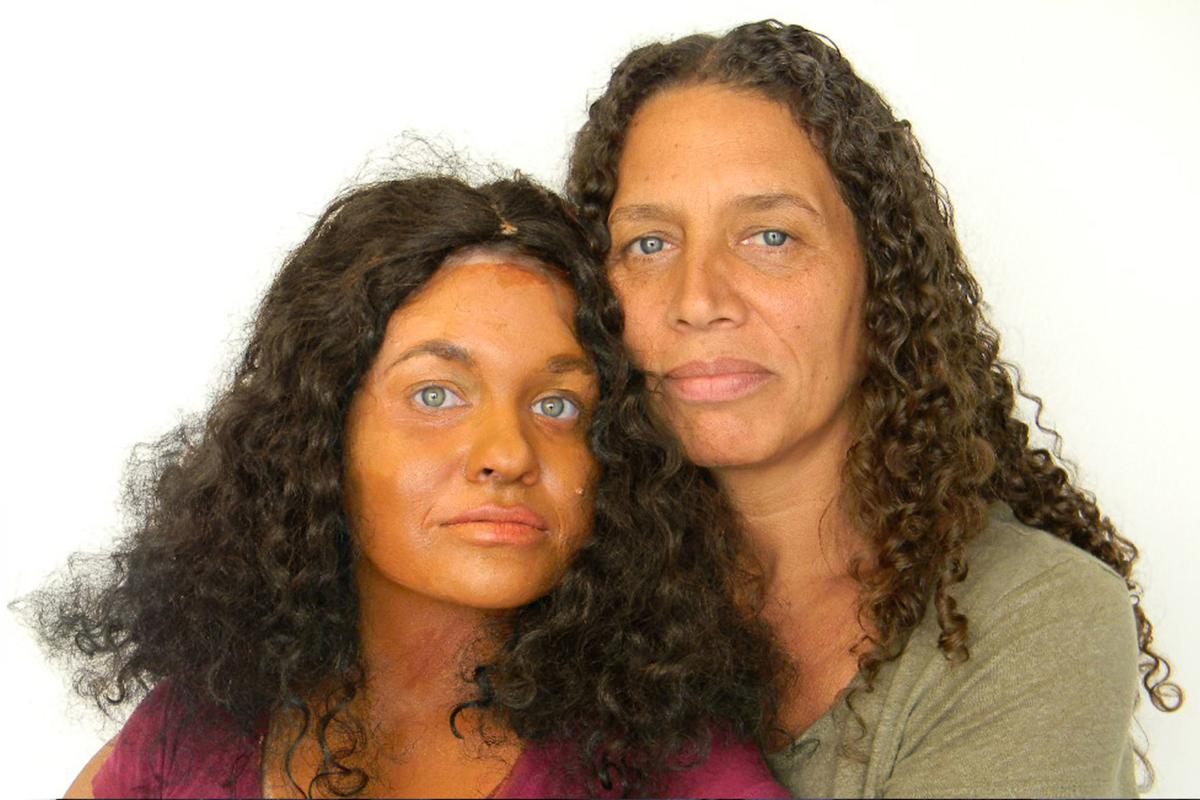 "Costuming Ethnic: The Artist and her Mother" by Aja Sherrard. 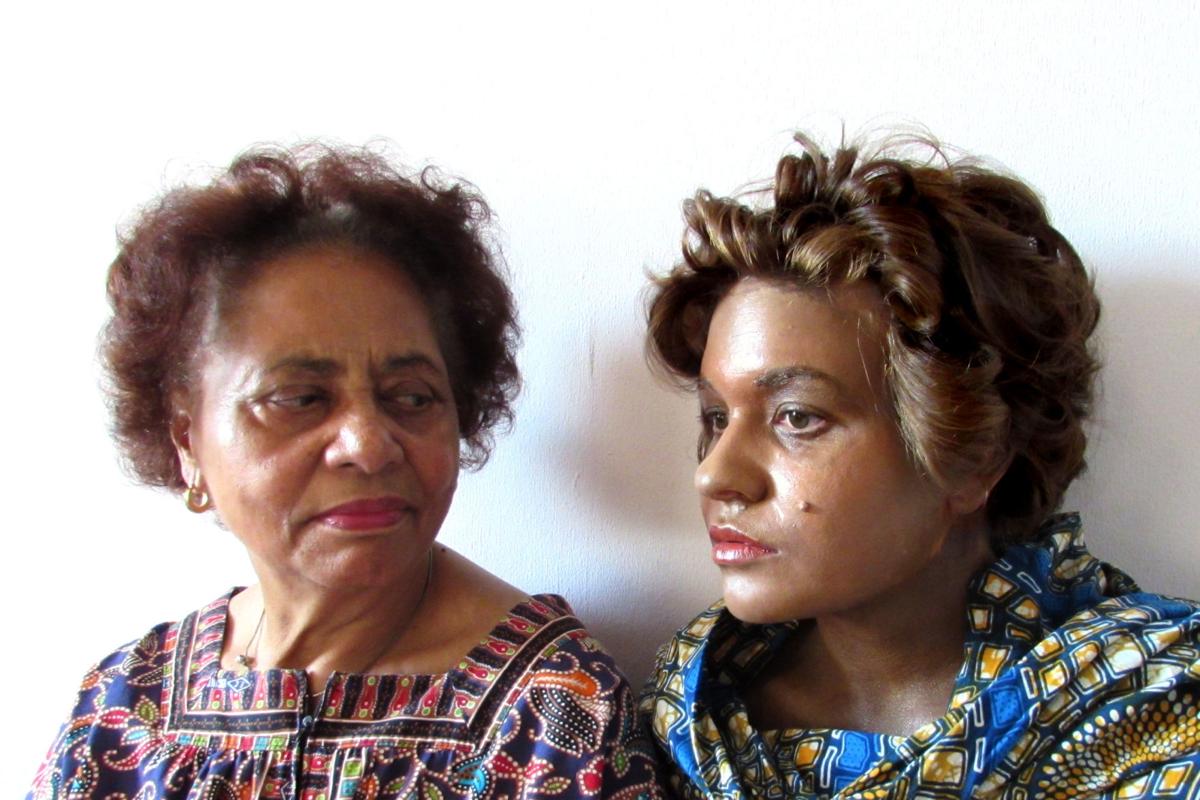 "Costuming Ethnic: The Artist and her Grandmother" by Aja Sherrard.

For a series of photographs called "Costuming Kinship," Aja Mujinga Sherrard explored the incoherencies in the way we think about race, which she called a fiction.

"Race makes sense because family relationships make sense, so we assume that so long as you're in relation to someone, that is an affirmation or a solidification of how we construct race. Looking at my own family, race is fundamentally incoherent," she said.

For the project, she would meet with a family member and paint her skin with artificial-looking acrylic paint to make herself resemble them more closely.

"My mother’s side of the family is Baluba from the Democratic Republic of the Congo, mixed for three generations with French, then Dutch, then white American," she said.

"By trying to invest in the coherence of my family and my race, I'm revealing the falseness of that presumption. I'm revealing that family doesn't justify racial logics any more than anything else does," she said. The discomfort is deliberate — she said it quotes from blackface and its history of violence, but turns that violence inward.

Sherrard, a professor of art and art history at the University of Montana-Western, talked about these photos during a lecture earlier this week. She didn't begin with her own work during the talk, "Skin Stories: Using Art to Take on Race," at the Missoula Art Museum earlier this week as part of its new adult education classes. She included it at the end, but it was a good example of the how issues that artists around the country and world have direct corollaries in western Montana.

As a whole the artists are acknowledging and renegotiating the images of race in our culture while putting new images into the discussion, she said. The images might be affirmative or create tension.

She actually began the talk with a caveat regarding the scope. "When we're talking about art and race, there is so far and so deep in history we can go. The way that we think about belonging has been visual for as long as we can think of in human history," she said.

She began with a quilt made by Lucy Mingo of the Gee's Bend collective in 1959. This traditional work, once considered as a craft, is now celebrated for its formal beauty in museum exhibitions.

She said it's important to look at this kind of art, made by disempowered people, while "squinting through" older European ideas of what art looks like: monuments, buildings, paintings. Those are all things that oppressed people couldn't possibly make. Instead, they used what was available — work cloth — and produced something practical.

"A quilt warms you, so the time to make it isn't leisure time in the way that making a painting or a monument would have been," she said.

With that practicality, the quilt Mingo made made with work cloth, jeans, rags and pocketed shirts, is an "essentially modernist" piece just like an abstract painting by Rothko or Pollock.

"We're looking at form and color," she said.

The idea of "whiteness" is a social project, she said, dating to the New Deal when there were concerns that the "ethnic divisions that had torn Europe apart would replicate themselves in what was essentially a sample of all those same European identities here."

There was an attempt to "create an American identity" through civil works projects, suburban housing, homogenized food culture, and advertising that collectively "de-ethnicized" Greek, Irish, Italian and other backgrounds into the Norman Rockwell images of "normalcy."

At the same time, the abstract expressionist movement developed art that strived to be "free" from content in a way that European modern art was not. "There was this fantasy that America was free enough to not be content-oriented, to simply be individual," she said.

Meanwhile, black artists like Norman Lewis injected their own content into abstract work. In his case, some of his black-and-gold-toned paintings might appear to free of "content" and just ideas about brushstrokes, form and color. Look more closely, and they reference Klan rallies and civil rights marches.

"It revealed his relationship to his own blackness while embedding in a culture that wanted an individual person, and not their social category, to carry the story," she said.

Likewise, Oscar Howe did the same with paintings like "Ghost Dance," that depicts the spiritual movement that sought to oust white settlers and return America to pre-colonial era.

Portraiture, another tradition that abstract expressionists left behind, was a recurring theme, starting with Frida Kahlo, the indigenous Mexican painter.

Kahlo went in the opposite direction by painting figurative self-portraits that push back against "ideas of femininity, beauty, Mexican colonialism" and more, while "using herself and her own identity as a source for political work and commentary," Sherrard said.

A contemporary example is the artist who produced the official portrait of President Obama.

"Kehinde Wiley is famous for taking up or inhabiting European images of heroism and recasting them into contemporary images of black men in the clothing of contemporary blackness, and a certain type of masculinity that's associated with it," she said. For example, in a self-portrait he placed in himself in the role of Napoleon atop a rearing horse, ready to lead his army into battle, set against a background of fabric that signals wealth and value.

"The easiest read for him is that he is taking existing forms of power and inhabiting them for people who are seen as marginal and elevating that and giving them stature. But because of the lush fabric, he's also toying with masculinity and he's playing with timelines of masculinity. Napoleon was not seen as queer in this sort of heroic cast, but to see a man dressed as Napoleon now would signal a kind of queering," she said.

Stacey Tyrell, a contemporary artist with black and Caucasian ancestry, was an example of an artist "who rather than try to prove their own existence, or correct the standards of their existence by behaving nostalgically, start looking at race as a medium or content that is troubling," she said. She and like-minded artists were interested in "not how to circumnavigate or overcome race, but how to find race confusing, to engage with the idiosyncrasies, and incoherencies of race start becoming the subject matter," she said.

She sought out pictures of women on the Caucasian side of her family and re-created them, dressing herself and lightening her skin as a way of exploring the way other people sort her.

"She looks black and because blackness is the absence of whiteness, or the deviation from whiteness, there's no way for her to fully inhabit those relationships. It's unimaginable in the way that that racial system is constructed. So that's what she pokes out," she said.

Adrian Piper, a light-skinned conceptual artist, drew pictures of herself with exaggerated, stereotypical African-American features; or drew herself as the pop-culture cliche of a blaxsploitation-era black man, with glasses and an afro.

Erica Lord, an artist with First Nations and Caucasian heritage, shot a series of photos in which she blocked out lettering on her bare skin and then tanned, leaving the text on her body, with messages such as "I TAN TO LOOK MORE NATIVE." It was a way of exploring the pressure on non-white artists to be authentic or "perform" in order to succeed in the art world.

James Luna confronted the history of museums taking Native sacred objects, used for communal and spiritual practices, and "deactivating" with dry displays. For "Artifact Piece," he would lie in such a display case for several hours at a time, with tags referencing parts of his body.

The artist's body is the work in other instances, too. Renee Cox stripped and donned exaggerated fake plastic-looking breasts and buttocks for "Hottentot," a reference to Sarah Baartman, a South African woman who was taken from her home and paraded around Europe as a curiosity for her features.

"It becomes a myth of dehumanization, and specifically a myth of the hyper-sexualization and dehumanization of black bodies in colonial bodies, so thinking about the simultaneous fascination with the body and the complete incapacity to relate that body to a person," she said.

Yinka Shonibare, a British-Nigerian artist, was told in college that his work wasn't "African" enough. So he went out and purchased type of wax fabric popular in subSaharan Africa and incorporated it in his installations, where headless figures re-enact Victorian activities. (In one piece, the figures are gathered around a table with a map of Africa, to divide and colonize.)

The wax fabric isn't designed or made in Africa, Sherrard said. It's made in Belgium from an Indonesian design, an essentially colonial object that he through back at his critiques.

In another series, "Diary of Victorian Dandy," he poses himself in scenes of Victorian opulence, frivolity, wealth and bad behavior.

Shonibare's use of the wax fabric inspired one of Sherrard's pieces as well. For "Our Baby Blanket," she took a quilt that her white grandmother had made for her father, which she in turn inherited.

It had fallen apart over the years. So she found some of those fabrics and repaired the gaps, contrasting the blanket's already "soft and docile colors" with the bright newer pieces was a way of "thinking about how those two sides of my family clash, and create incoherent or dissonant imagery when stitched together into the same fabric."

"Rhapsody at the Roxy"

Like their name implies, MASS FM have a maximalist bent to their sound: big guitar tones, synths, hooks, bass and drums.

The University of Montana's struggle with enrollment decline is acute, but the campus isn't alone in facing drops.

"Costuming Ethnic: The Artist and her Father," by Aja Sherrard.

"Costuming Ethnic: The Artist and her Mother" by Aja Sherrard.

"Costuming Ethnic: The Artist and her Grandmother" by Aja Sherrard.