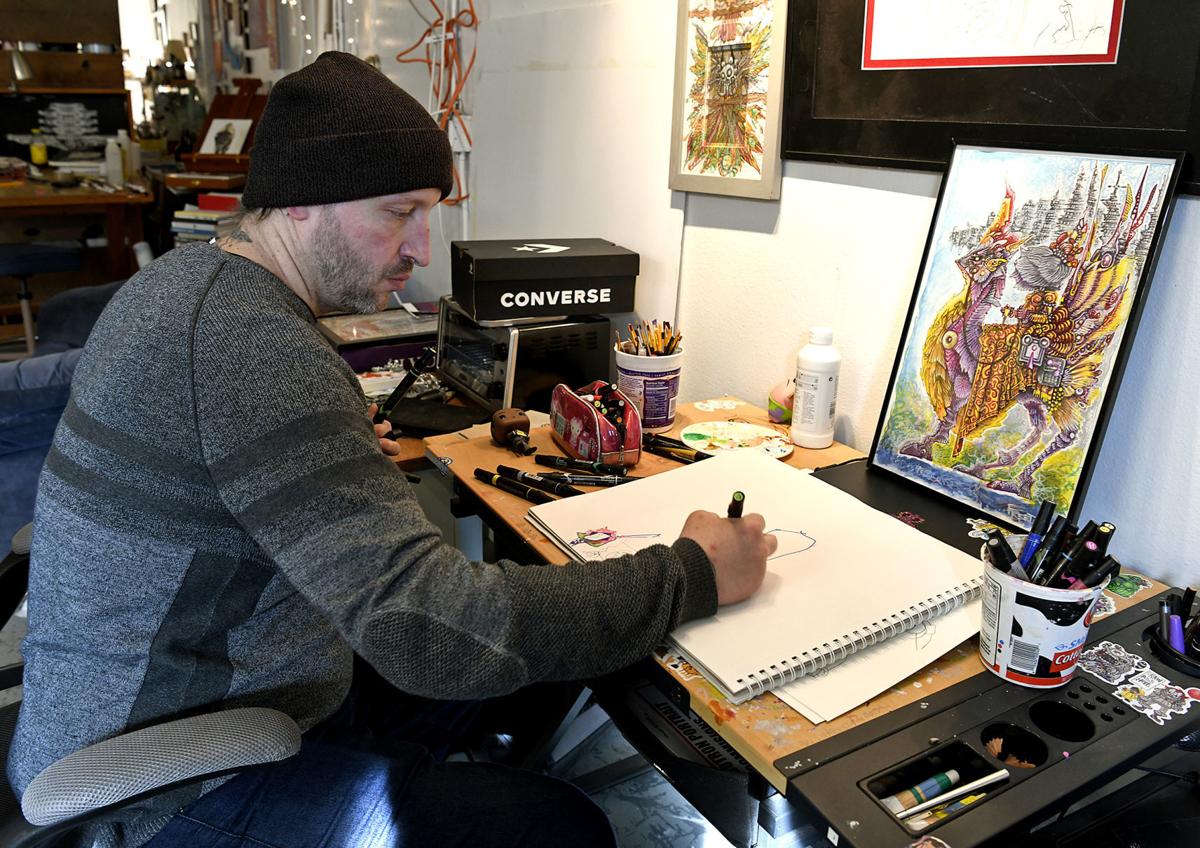 Freedom Lee Drudge, president of the VonCommon art collective, draws at the nonprofit this week. The collective will hold an open studio night on March 13. 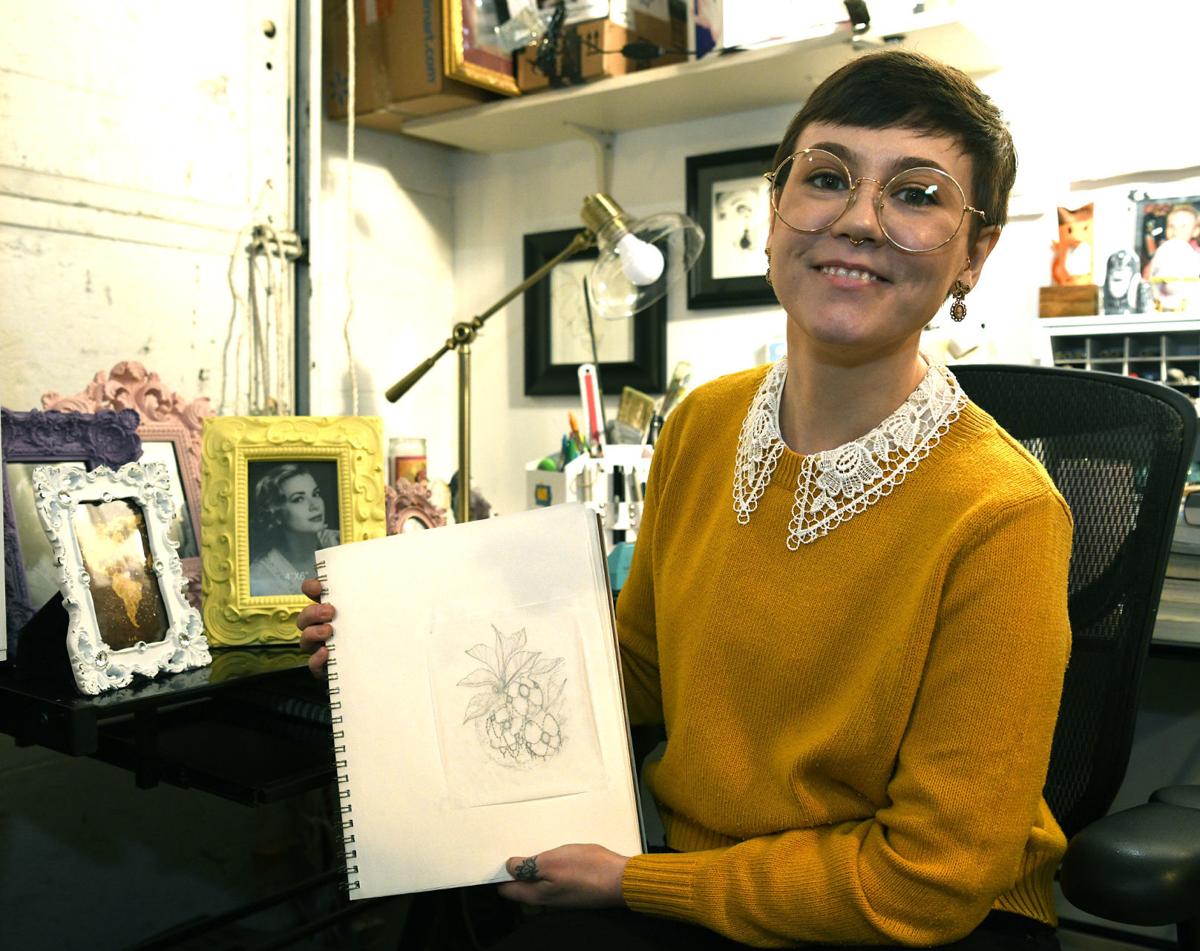 Jessie Smith rents a studio space at VonCommon, where she works on her illustrative art. She's currently working on pieces based on ornate picture frames. 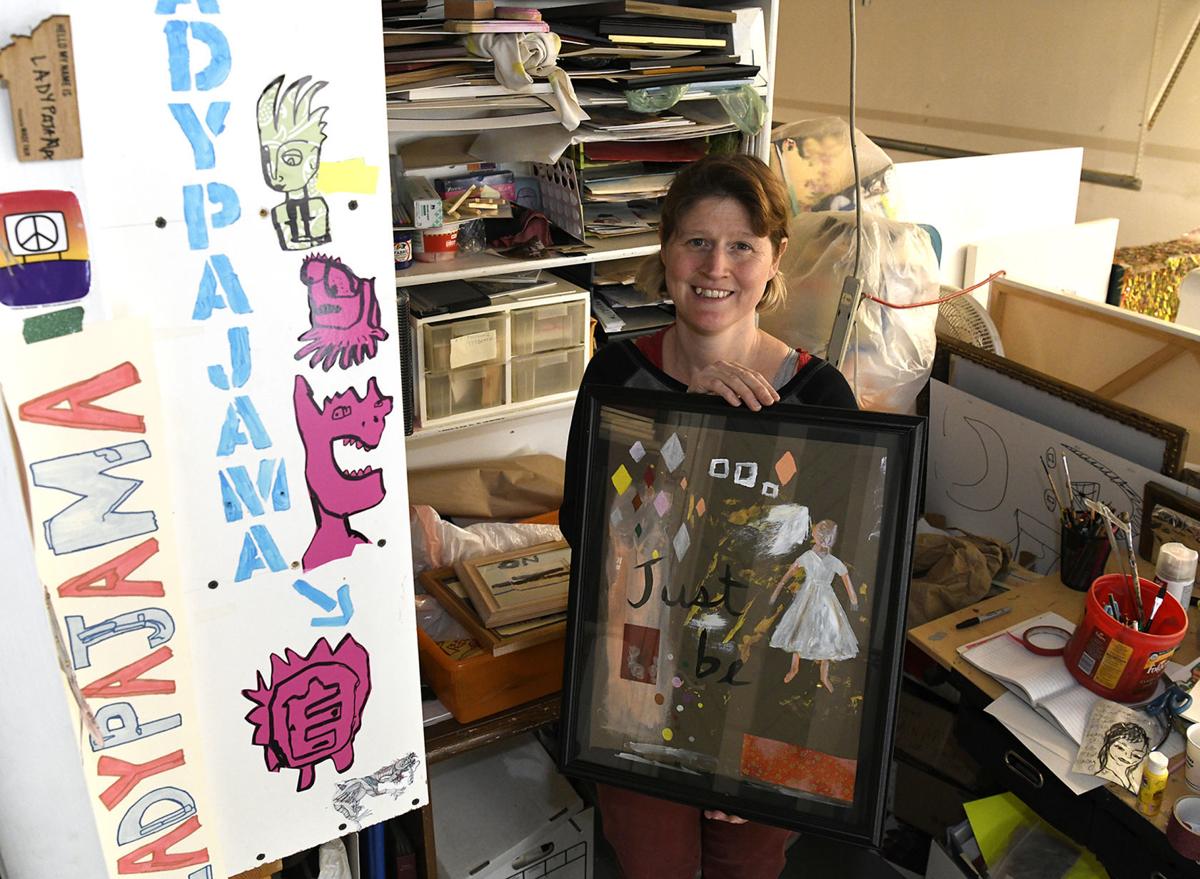 Katie Ludwick, who creates art under then name "ladypajama," is a seven-year member of VonCommon and also the treasurer.

VonCommon wants to reintroduce itself to Missoula.

"We're trying to get our name back out there," said Freedom Lee Drudge, an illustrator and president of the nonprofit art collective.

It's known as a home for creators of all kinds and themed exhibitions and art parties at its rented warehouse off Wyoming Street that's been divvied up into affordable art spaces that add up to a general atmosphere of no-holds-barred creativity.

They've hosted a handful of events a year, where alternative and underground art was the entire show, not a fringe activity. After some turnover, and the departure of several longtime members, the group wants to raise some awareness via an open studio on Friday and a big fun and weird art party, PromCommon, in June.

"Really the open house is kind of an advertisement for our big PromCommon," Drudge said. The party, a big and Missoula-weird staple, has an open call for art of almost any type. (See box.) Expect bands, music, costumes.

"We haven't actually had a real art show in a while," said Katie Ludwick, aka the artist ladypajama, a seven-year member and now the treasurer.

Several longtime members, like Adelaide Gale Every and Marlo Crocifisso, left to pursue their work elsewhere. Crocifisso is now based out of her shop, Art Haus Fine Art Framing, located in the renovated Brownie's Motel.

That doesn't mean the spaces are physically empty: The warehouse is clustered with art materials and work, part of its appeal to Drudge.

"There's instantly this inspiration when you walk in here, because there is art all over the place ... there is that energy here," Drudge said.

The current members include visual artists like Drudge and Ludwick, or Acton Siebel, their general manager who makes lamps from upcycled metal parts, to Ryan Simón, a writer, and even a metal band called That Witch Took A Dump Somewhere. They have a larger space upstairs that they want to use for classes and public events, anything from live drawing sessions to poetry readings.

Drudge arrived in Missoula on a visit that became a permanent move and rented a spot as soon as he could.

"The people here just let me come in and use their space whenever I wanted, and it was really cool. They were all very open," he said, adding it's part of the reason he stayed in town.

Drudge tried working from home in the past but grew tired of setting up and putting away an entire drawing station every time he wanted to make work — an hour lost for 15 minutes of art.

"Nothing was getting done. So having somewhere where I can just sit down and within five minutes of deciding to do art, be doing art, that's priceless," Drudge said.

Ludwick said having a separate space away from home makes her treat the art more seriously. There's also fewer distractions: "It's not like you're going to start drawing and be like, oh I should really do the dishes."

They rent space based on square footage at affordable prices. Ludwick's spot on the second floor, where she makes her collages, drawings and zines, costs only $72 a month.

Jessie Smith, an illustrative artist, moved to a corner spot in October. She's focused on doing work along the lines of the drawings she made during an Open AIR artist residency program that placed her at the Montana Natural History Center. She's been creating imagery of animals and nature drawn from Treasure State species.

She said a studio space typically costs $200 and up, so VonCommon's rent at $76 a month was a vastly more affordable option. She has to try to balance her personal artwork with commissions and another job and family.

She has two children, and so working out of her living room became too difficult since she didn't want to deprive them of a space to play.

Ludwick said she likes the sense of community, too. Even though she often has the entire warehouse to herself, "you still feel like you're part of a group."

"I'm a VonCommon artist," she said.

The VonCommon art collective will hold an open studio night on Friday, March 13, from 6-9 p.m. Artists will show off their spaces and work. The studios are located at 100 N. Johnson No. 7.

They invite submissions of 2D and 3D work, performance art, video or musical pieces, installation, costumes or more. Go to the @voncommon Facebook page under the event, "Art Call! PromVoyage. Send submissions or questions to voncommonstudios@gmail.com.

The submission deadline is May 6 at midnight. The event will be held on June 6.

Port Polson Players back for first show since 2019

Their Port Polson Players reopened this weekend for the 47th season and its first show since December 2019 with “Dirty Work at the Crossroads,” a vintage melodrama.

One Missoula artist's pandemic line of novelty shirts (and a spork)

Writers are abundant in our spunky mountain town, which is evidenced by the variety of artful poets published throughout the last decade in th…

Freedom Lee Drudge, president of the VonCommon art collective, draws at the nonprofit this week. The collective will hold an open studio night on March 13.

Jessie Smith rents a studio space at VonCommon, where she works on her illustrative art. She's currently working on pieces based on ornate picture frames.

Katie Ludwick, who creates art under then name "ladypajama," is a seven-year member of VonCommon and also the treasurer.