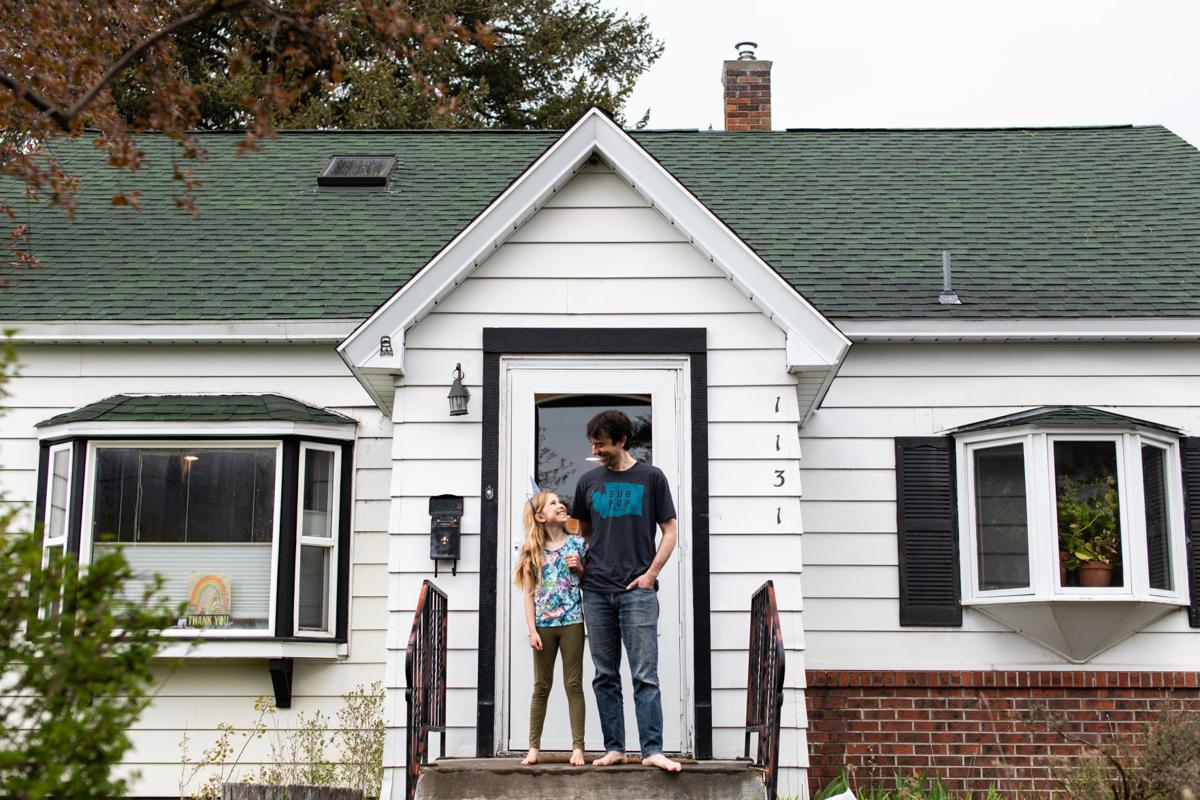 Jeremy Smith and his daughter, Rasa, on their front porch in the Rattlesnake neighborhood of Missoula. The two host the podcast "You Must Know Everything" together, and spend the short episodes discovering the answers and solutions to everyday questions, and sometimes making unexpected connections. 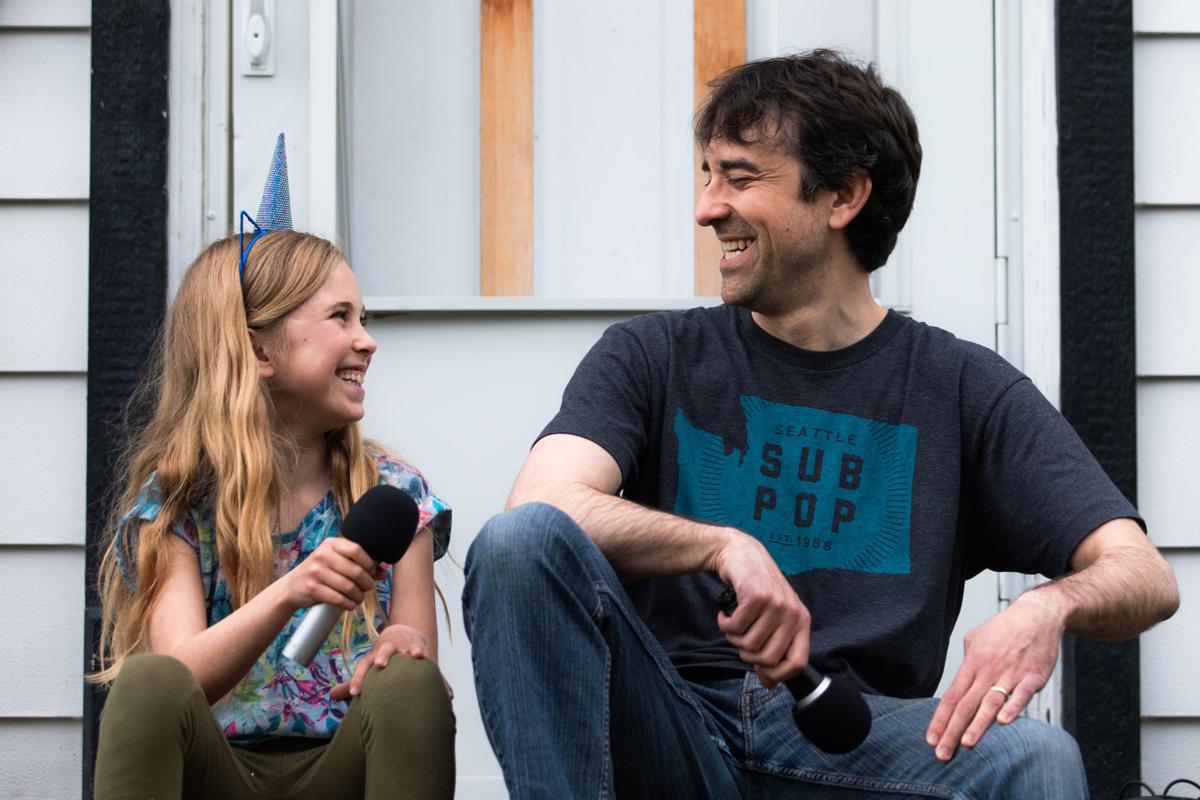 Jeremy Smith and his daughter Rasa show off their podcasting equipment. The two released the first episode of their "You Must Know Everything" podcast on April 7, and have about eight episodes so far. Their most recent topics include lattes, traffic, notes, cups and slime. 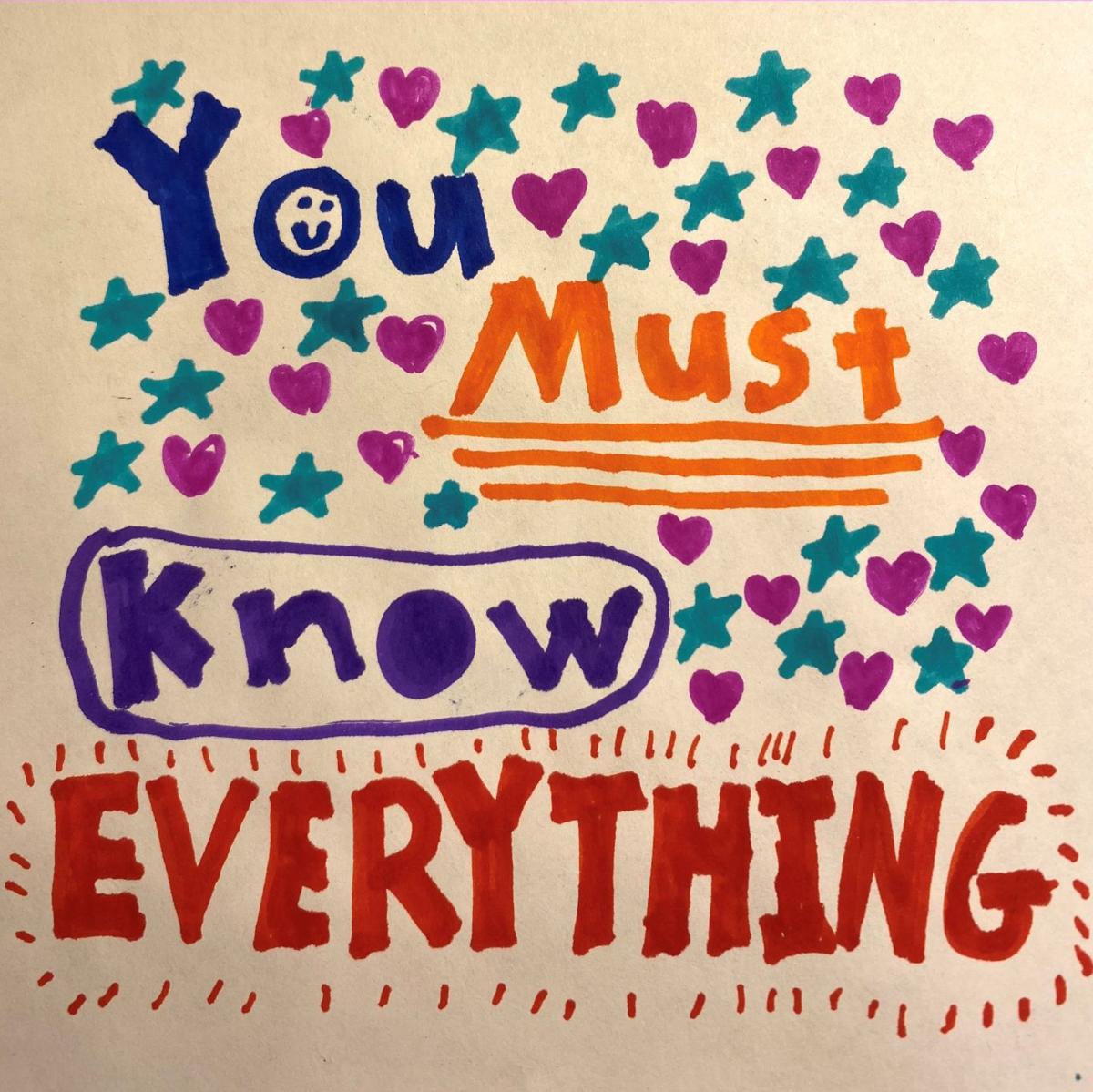 Rasa Smith, 9, designed the logo for "You Must Know Everything."

“How many people fit spaced 6 feet apart in the state of Montana?”

Nine-year-old Rasa Smith posed the social distancing question to her dad in a recent episode of their new podcast, “You Must Know Everything.”

Stuck in their house with each other under stay-at-home orders due to COVID-19, Missoula writer Jeremy Smith and his daughter Rasa have started a heartwarming and inspiring pandemic-era podcast to answer all the pressing questions they have and learn more about each other in the process.

In a refreshing format, the twice-weekly, 10-minute conversation, flips the parent-child relationship on its head, as the father-daughter duo share personal theories, read and analyze a poem together and answer a vexing question.

The pair have been recording and releasing episodes since early April and have covered everything from how to make the best scrambled eggs and crafting the perfect slime to assessing a personal crisis and learning how to gauge compatibility when dating.

“It was kind of a long germinating idea to share these sort of teachings that you don’t get to in school because they’re my own strange theories or life lessons or eccentric musings, and at the same time, she has her own theories and knowledge that has been really great for me to get to hear, too,” he said. “We just kind of flip who’s the student and who’s the teacher and that’s been such a wonderful connection.”

The podcast starts with either Rasa or Jeremy informing the other of an idea, concept or topic on their mind. Jeremy said he’s been surprised to be learning just as much, if not more, from his daughter as she is from him.

In his favorite episode, Rasa shares a life lesson about lollipops.

“I was like, ‘Where is this going?’” Jeremy said, reflecting back on recording the episode.

Rasa then compares her lollipop dilemma with an observation she’s made of her dad. When he sits down to read the news every day, he always makes the same look of disgust after, as if he doesn’t like what he’s doing.

“I was like, ‘Oh, my God, it’s my lollipop!’” Smith said of his daily news habit and the revelation brought on by his daughter’s lesson. “It’s something that I think I should like, that other people like, that people talk about as a treat, but if it’s not working for me, maybe I should stay away from it.”

After the episode aired, he had a listener reach out to tell him her lollipop is alcohol.

“We all have our lollipops, our coping mechanisms, our supposed treats that aren’t really treats,” he said. “I just thought, wow, from the mouths of babes, or so they say, came this great wisdom.”

Jeremy and Rasa then each take a turn reciting a poem and discussing their thoughts on what the meaning might be.

“Poetry is a wonderful form because it says something smart or sharp or beautiful in a really tight space,” he said. “I can read it and she can read it and we can talk about it and be enlightened and out within two or three minutes.”

At 9, Rasa’s ability to dissect the words and form her own personal interpretation is impressive, and hearing a child’s perspective is eye-opening.

Doing the podcast twice a week has brought about a new level of curiosity in Rasa and created a closer bond between her and her father, he said.

“I feel like she comes to me with more questions because she knows we’re going to have this outlet to answer them.”

“I like it because I get to know so many new things about him that I’d never even considered,” Rasa said.

In the “Lollipop!” episode, it was Jeremy’s turn to ask a vexing question and he wondered if Netflix makes a profit and how they stay in business. Once the question is asked, they pause the episode and go figure out the answer.

“I’ll just throw any question at her and she doesn’t have a preconception of what’s easy or hard or weird or normal to investigate,” he said, adding that day, Rasa ran off and dove into research on Netflix’s business model.

“I thought I would need to help her pore through it or figure out what the numbers meant, but she just went and found their financials, dug in and found a pretty surprising result to both of us (you’ll have to listen to find out).”

In Rasa’s favorite episode, she teaches her dad how to make slime.

“We couldn’t find any glue, but you need glue to make slime,” she said, adding she surprised her dad by improvising and using glitter glue instead. “It worked out great.”

She also had fun teaching her dad how to make a "fortune teller note" and was impressed with his abilities.

“He just was good at it so quickly,” she said. Jeremy added learning how to make a simple origami note from his daughter is one of those “small things” in life you’d normally miss, but the podcast has helped him embrace.

“I just felt this wonderful sense of accomplishment,” he said. “Just stopping to learn is grounding and inspiring and just a source of positivity that I look forward to every time we talk.”

He hopes the podcast makes people smile and maybe teaches them something, too. The duo plans to continue producing episodes until they either know everything or the world returns to normal, whichever comes first, he laughed.

“It’s these little 10-minute capsules of innocence and intelligence and joy and I think we all can use more of those things right now.”

By the way, Rasa and Jeremy did the math — you can fit 113 billion people in the state of Montana spaced 6 feet apart.

"But they'd need to bring their own food, their own water and a pretty good pair of hiking boots," Jeremy says in the episode. "And they'd have to let bears, moose and other wildlife sit on their laps."

"You Must Know Everything," a new twice-weekly podcast by Missoula writer Jeremy Smith and his 9-year-old daughter Rasa, is available on Apple, Google, Spotify, Stitcher and RSS.

The 2021 Emmy Awards were a night of firsts and surprises

Twenty-eight years in, Missoula punk band VTO is past any angst and only playing music for music's sake.

University of Montana students are using their photography classes to document the isolation and uncertainty of living through a pandemic.

Jeremy Smith and his daughter, Rasa, on their front porch in the Rattlesnake neighborhood of Missoula. The two host the podcast "You Must Know Everything" together, and spend the short episodes discovering the answers and solutions to everyday questions, and sometimes making unexpected connections.

Jeremy Smith and his daughter Rasa show off their podcasting equipment. The two released the first episode of their "You Must Know Everything" podcast on April 7, and have about eight episodes so far. Their most recent topics include lattes, traffic, notes, cups and slime.

Rasa Smith, 9, designed the logo for "You Must Know Everything."