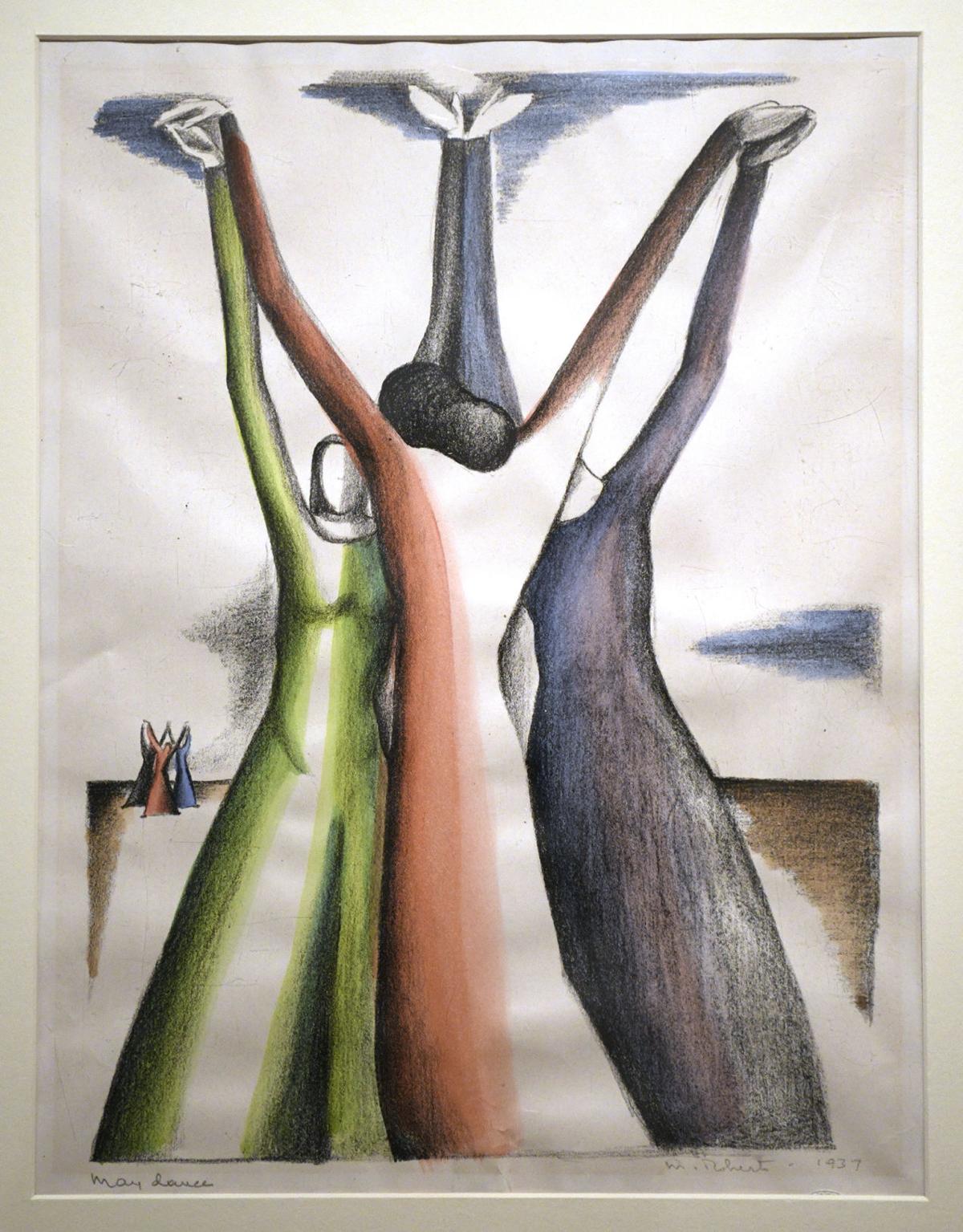 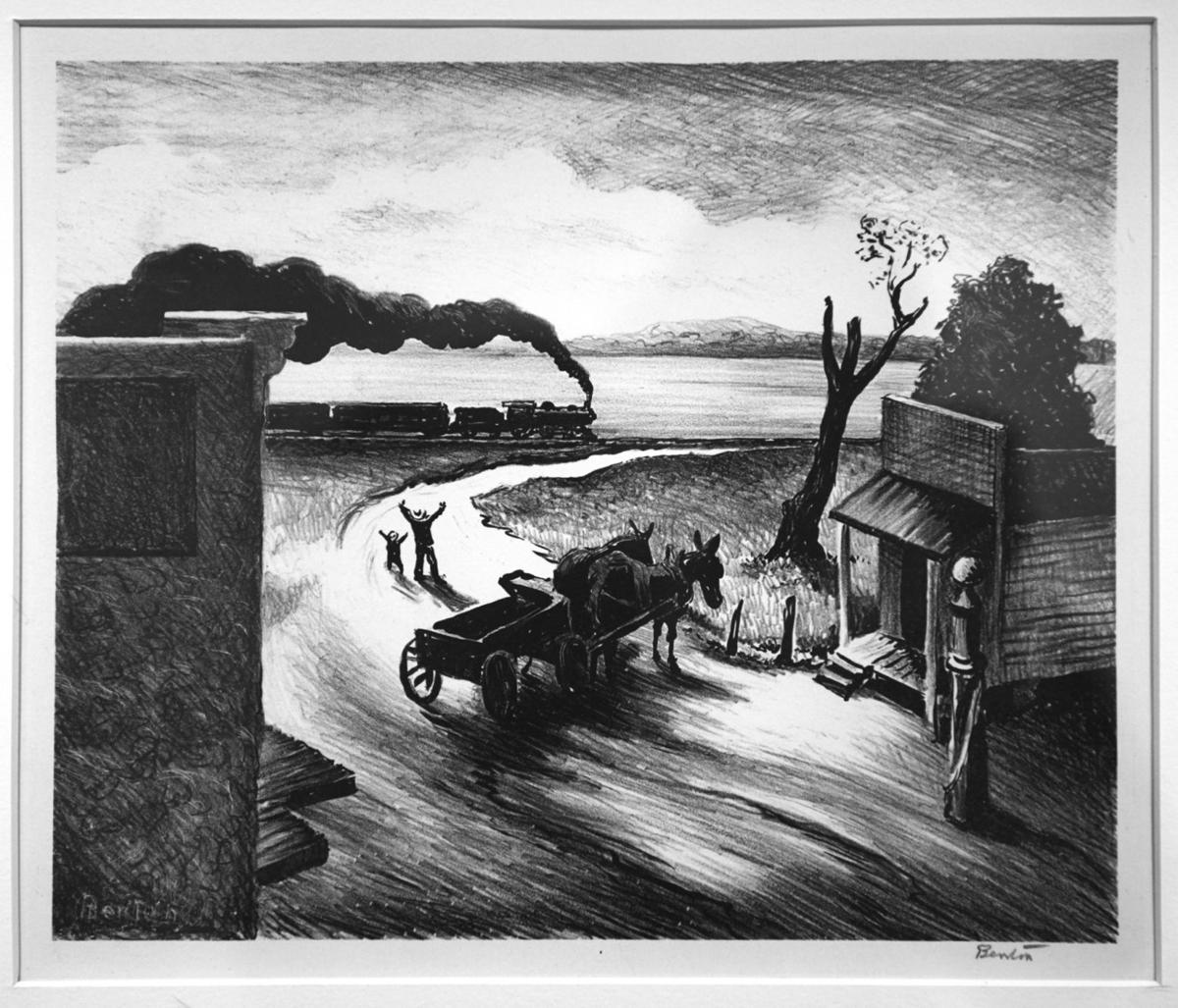 Among the works in the exhibit is a print by Thomas Hart Benton, who was well-known for his murals.

Prints that illustrate American hardship, resilience and daily life during a crisis are going on view at the Montana Museum of Art & Culture.

The exhibition, “Works in Progress: Prints from the New Deal,” is culled from pieces made during the Great Depression, when thousands of artists around the U.S. were employed by President Roosevelt’s recovery program.

Many associate the program with murals, but printmaking was another popular activity, and the final pieces were dispersed around the country, including the University of Montana, on permanent loan.

Collectively, the pieces “tell a story of the Depression,” said guest curator Ted Hughes, of the Historical Museum at Fort Missoula. The pieces can “generate some empathy for what people were going through,” while also delving into how they stayed engaged in their communities and eventually recovered.

The MMAC’s exhibition is thematically divided to show different sides of life during the 1930s and early ‘40s: “The Unemployed,” “Leisure and Entertainment,” “Labor and Transportation,” and “Urban and Rural Scenes.”

In the first section, pieces convey the mood of the period in subtle ways that don’t directly record human suffering. Samuel L. Margolies, who was employed by the arts teaching division, is represented in “Shacks by the Road.” The print is a “paradox,” said MMAC director Rafael Chacon. We see “a train speeding along in the distance, which is of course a symbol for progress and modernity and industry and commerce, and at the foot, the shacks. Substandard housing” he said.

Claire Mahl Moore’s “The Fair Sex” is populated with German Expressionist renderings of faces, with “the hunger in their features,” said Hughes.

A sense of optimism returns in the “Leisure” section, where artists illustrated modern dance, folk musicians, parades and parks. Kyra Markham, who worked in theater and set design, transitioned to visual artist during the Works Progress Administration. Her print, “In the Wings,” glimpses three costumed dancers backstage at a performance.

Chacon said a high number of women artists were involved given the time period. “This was a very egalitarian project, and unusual in that regard.” However, few of the artists, men or women, in the show continued on to well-known careers, partly because of changes in the art world.

“Many of the artists ultimately became obscure, because they were railroaded by (modernist abstraction) in the ‘50s and ‘60s, and it’s too bad because some of them are really talented artists but a majority of them are relatively unknown,” Chacon said. “Urban and Rural Scenes” does include a work by Thomas Hart Benton, the American Regionalist well-known for his murals around the country.

“Labor and Transportation” may include some of the most familiar archetypes, such as Arthur G. Murphy’s “Bridge Worker No. 7,” which depicts a “heroic, sort of Christ-like laborer” working on infrastructure, Hughes said.

This topic had a section of its own, since the WPA’s message was that “salvation is in work,” Chacon said.

“It’s through industry that we’re going to save ourselves as a nation.”

The “get back to work” message may resonate, although the show has been in the planning stages before the pandemic.

“We started to see connections between what Americans experienced during the Great Depression and what we’re experiencing now. Of course, the contrast is great, too. This is a time that people really came together. Of course, this is a time that we can’t physically be together because of the pandemic. But the thread of Americans working together to overcome difficult times, that is consistent, and it’s been really remarkable to see that in these prints,” Chacon said.

The Montana Museum of Art & Culture is exhibiting, “Works in Progress: Prints from the New Deal,” from Nov. 13-Jan. 15 in the Paxson Gallery in the PAR/TV Center. Go to umt.edu/montanamuseum for more information or to check for virtual tours.

Things to do: Museum shows, dance and film fests

A quick guide to some of the in-person and online arts events happening around Missoula in the coming week.

Missoula Community Theatre has called off the slate of holiday shows, musicals and large-cast productions it had planned for its 50th anniversary season in 2020-21.

Kiddomatic: Bright, fun kids' films from around the world

Films with bright color palettes and bright messages — if you “want an escape to watch something happy,” the Kiddomatic children’s internation…

It’s difficult to judge a book by a two-page spread. That’s where the virtual tour comes in.

The Missoula Art Museum is looking for submissions of art and local music for a compilation that it will sell at its fundraising auction in February.

Among the works in the exhibit is a print by Thomas Hart Benton, who was well-known for his murals.