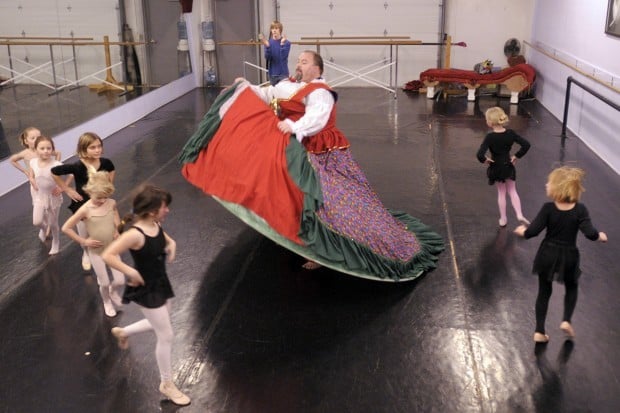 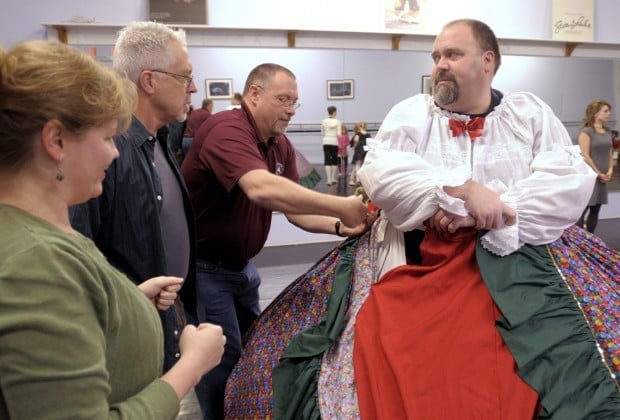 Michele Nokleby, Michael McDonald and Jed Liston, from left, help Mayor John Engen into his costume last week during rehearsal for this December’s performances of “The Nutcracker.” Photo by TOM BAUER/Missoulian
{{featured_button_text}}
1 of 2

Michele Nokleby, Michael McDonald and Jed Liston, from left, help Mayor John Engen into his costume last week during rehearsal for this December’s performances of “The Nutcracker.” Photo by TOM BAUER/Missoulian

In his job as mayor of Missoula, John Engen wears many hats. In his free time this weekend, he'll wear one very large dress.

"I always like to do what I can for a good cause," said Engen earlier this week, "even if it means wearing a dress."

This very evening, Engen will don the oversized dress and make his balletic debut as Mother Ginger in Garden City Ballet's 25th annual production of Tchaikowsky's "Nutcracker Ballet." His job description for the performance: Shuffle on stage and stand, smiling, as young dancers dressed as gingerbread children dance out from underneath the dress.

"I think to call it ‘dancing' would be a liberal use of the term, indeed," said Engen. "I'm moving around in this enormous costume, and these tiny ballet dancers pop out and pop back in underneath. It's a mercifully brief appearance that requires me to remember just a few things, and I have just enough capacity for that."

Self-deprecation aside, Engen can be excused if he feels stretched to his limits. In 2009 alone, the mayor has emceed 28 awards ceremonies, acted as auctioneer at 15 events, performed two weddings, given 16 welcome-to-Missoula addresses - oh, and sung "I Will Survive" in front of a large crowd at the Wilma Theatre.

"That one, I felt for the audience," said Engen of his surprise appearance at the YMCA's YMusic Jamophilia Extravaganza in November. "I'm not much of a singer."

Perhaps. But even if he hits a few wrong notes when he sings, Engen's I'm-game attitude toward community events has set a new tone for the role of mayor during his four-year tenure.

Long before he was elected mayor, Engen was known for his sense of humor, starting at least back when he began writing a column for the Missoulian at age 17. He says his sense of humor has helped preserve his sanity as mayor, even as it has served good causes as well.

"I have a pretty serious day job; I'm the CEO of an organization with more than 500 full-time employees, responsible for hundreds of millions of dollars in assets, a huge budget, and I make difficult decisions in concert with staff, council and the community all the time," said Engen. "I take all that really seriously; but my sense of humor has helped sort of preserve me over time, and I haven't lost it. I recognize that my job has gravitas. But if I isolate myself as mayor to my office and to council chambers, I miss out on a huge portion of what goes on in our community. And I think folks like to see their elected leaders out among them."

True. However, few public officials in recent memory have approached that part of the job in quite the way Engen has. Prior to donning Mother Ginger's dress, he's been seen in Santa costumes and clown costumes. But it's when he's in his own skin that he's at his most natural. At Home Resource's Spontaneous Construction Gala Auction last October, Engen sent the crowd into hysterics as he suggested dubious uses for some of the items up for auction, and successfully cajoled one bidder into bidding against himself.

"I have some sort of standup comic demon in me, and I enjoy the fact that through those events I can exercise it - rather than exorcise it," said Engen. "Fortunately, sometimes there's that perfect storm of enthusiasm, bank accounts and liquor at those events. If you have the right crowd and the right stuff on the right night, it's really energizing."

"It's such a remarkably generous community we live in," continued Engen, "and that's a lot of the joy of it for me. At every event there's a new face, somebody who's becoming engaged and will become a part of the next generation of community givers and participants. And that's really rewarding to me. I feel honored to be in a position where I get to witness our community at its best as often as I do."

A girl named Clara receives a toy nutcracker for Christmas, falls asleep, and dreams of fant…