TNF: Scores and updates from Raiders vs. Rams 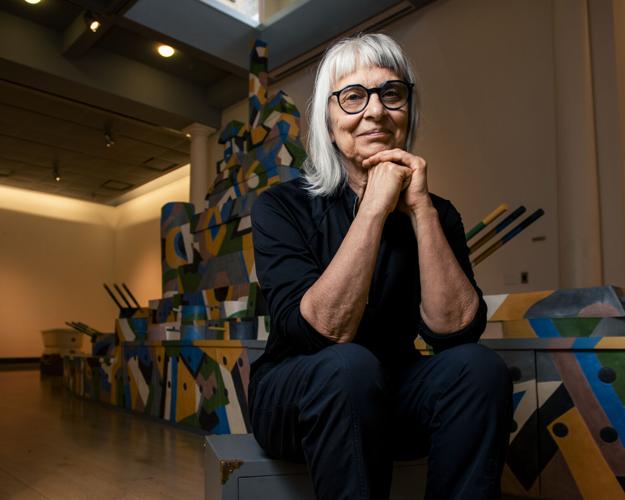 Marilyn Lysohir sits next to her 24-foot ceramic battleship, a part of her exhibition, "The Dark Side of Dazzle," at the Missoula Art Museum. 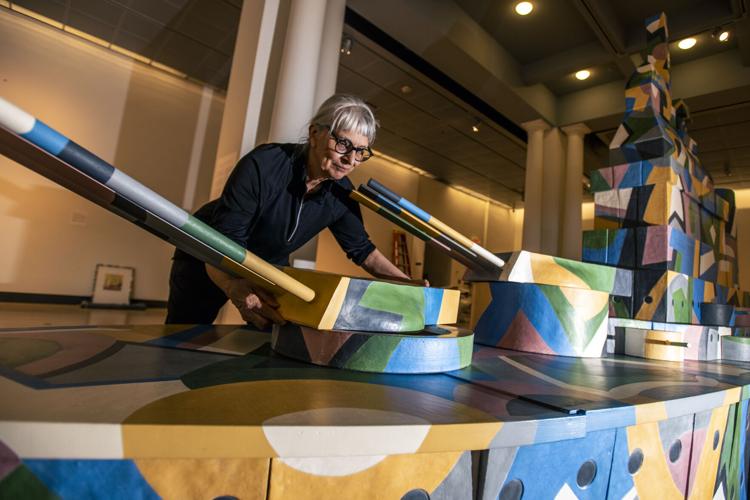 Marilyn Lysohir places one of the ceramic turrets atop the 24-foot ceramic battleship. 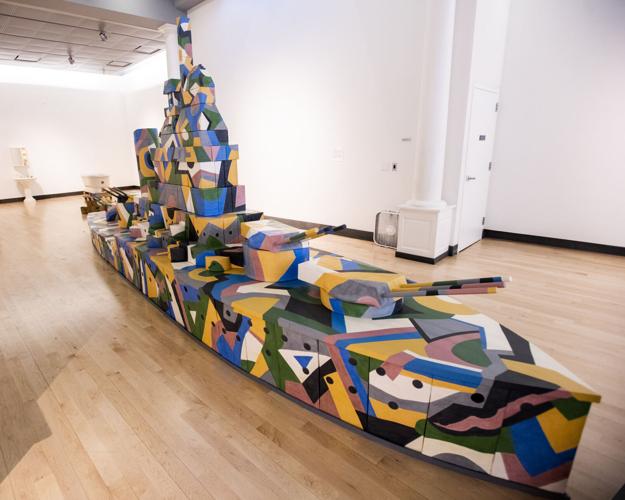 A 24-foot ceramic battleship, a part of the Missoula Art Museum's The Dark Side Of Dazzle exhibition. 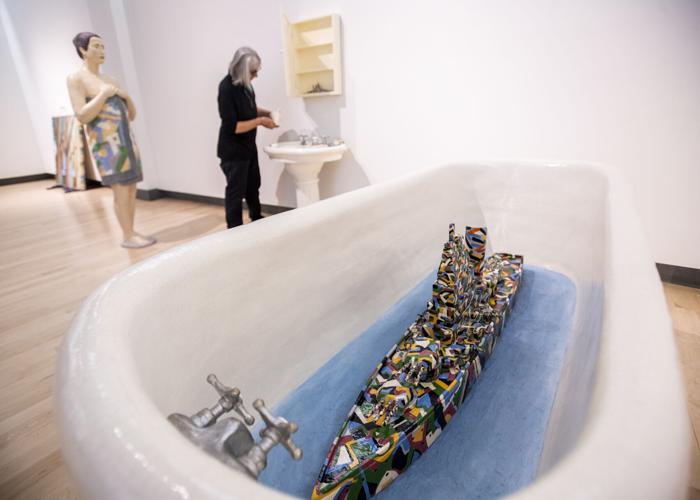 The Missoula Art Museum's "The Dark Side Of Dazzle" exhibition.

Ask Marilyn Lysohir why she built a 24-foot long battleship, and she has a clear answer.

Looking at the installation “The Dark Side of Dazzle,” several decades on, Lysohir said she’s “in awe that I actually made that." She wonders, “how did I do that?” and “how did I even think of it?”

The "why" is more clear — she wanted to pay tribute to her father, who served in World War II, and other veterans like him.

“The important part of the piece for me is that it was representing and honoring these people,” she said.

The complete installation, which fills the largest gallery at the Missoula Art Museum with a massive ship, paintings, other sculptural works and audio recordings of interviews, has only been shown periodically since its creation. The museum reached out to Lysohir, who now lives in Moscow, Idaho, about bringing the work here.

She undertook the project in 1985-86, when she was only in her mid-30s. It might have seemed quixotic when described in shorthand, so much so that her husband, Ross Coates, also an artist, told her that perhaps she shouldn’t tell people she was building a massive battleship.

The boat spans 24 feet long, 4 feet wide and 9 feet high, appearing as though it could indeed get taken out on the water. It’s all clay – 2 tons worth by her count. (Keep in mind that it shrinks.) The interior is hollow, except for some wood supports. Much of it is made from flattened slabs, but other parts, such as the stack, Lysohir threw by hand on the wheel. (It likely weighs a daunting 50 pounds.)

Lysohir last exhibited at the MAM in 2010, with an exhibition called “Good Girls 1968,” another full-room installation that included busts of all 163 girls from her graduating high school class.

The “dazzle” in the title refers to the geometric shapes on the ship’s surface, which resembles an abstract painting — its colors jutting in seemingly conflicting directions. The “dazzle ships” were an innovation during the first World War, when the German U-boats were wreaking havoc upon British merchant ships, according to an article in Smithsonian magazine.

People on both sides of the Atlantic pitched ideas for ways to camouflage the vessels. It was Norman Wilkinson, a British Royal Navy volunteer with experience as a seascape painter and graphic designer, who came up with a novel idea. Rather than thinking of a way to hide the ships via camouflage, he thought bold contradictory patterns could create confusion about the direction they were heading, thereby sparing them from direct hits.

(U-boats could only raise their periscopes for a short time and based their launches on perceived path.)

The original visual spark came from an experience when Lysohir was in high school and had a job working at an antique shop. The dealer went to an estate sale and bought a collection of more than 20 ships. After she’d returned from graduate school, she revisited them with fresh eyes and saw them for what they were: outsider art. “They weren’t high craft, they were just beautifully made and heartfelt,” she said.

After haggling over the price, she bought one that boasted some particularly interesting colors. She placed it on a shelf where she’d see it every morning, and decided she wanted to make something about her father.

“The clue was hitting me in the head,” she said.

Her father served in the Army in World War II, her mother in the Marine Corps here in the states.

She’d shown at a gallery in Los Angeles with a large ceramic creation called “Bad Manners,” which was broadly about gluttony. She crafted a table decadently stocked with foods: hams, chicken, spaghetti, cakes and desserts, for a group of four diners. Seated in suits and dresses, arms extended, they’re the opposite of the parents in “Spirited Away.” Instead of turning into pigs, they’ve disappeared and their clothes stand upright but empty.

The work sold, and the gallery offered her another show, with a deadline of two years. She rented out a storefront to use as a studio during the construction — people could come by and ask questions and she kept a diary.

“I can’t explain it, but you go into a zone when you’re building something,” she said. For her, that meant that every day, she went into the zone, “almost like autopilot.”

She had mechanical drawing skills from a stint teaching at a Catholic school, which was handy when it came time determining how to measure out and scale up the ship, which is constructed of many smaller parts that needed to fit together.

The colors are derived from a particular technique where the surface is rubbed with stone and gives it a natural sheen.

“That ship is all burnished, every inch of that I rubbed with my thumbs and my fingers and my hands. I would put the color down and then rub it,” she said.

Besides the construction itself, the work survived multiple near disasters. One storage space had a fire. The parts were wrapped in plastic and took on some wood-smoke smell. Another time, a studiomate who was supposed to keep the stove lit forgot. The top part of the ship, wrapped in plastic, froze. When it thawed, it cracked and required repairs.

But the ship was complete.

Another aspect of the project were the audio interviews, which you can listen to on headphones in the gallery. She interviewed veterans of World War II, Korea and Vietnam, all “people that knew me that agreed to share their experiences, and it was very hard. It was very difficult to do that. Some of them are very sad, very upsetting, others are very funny,” she said.

The material itself has an effect on the final product, said Brandon Reintjes, the MAM’s senior curator.

“They’re also really fragile, and to make a battleship out of ceramics has a very different association than if it was made out of wooden blocks,” he said.

Regardless of material, it’s one of the largest pieces of art you may have seen indoors in Missoula in years. Comparable works from the past include Edward and Nancy Reddin Kienholz’s “Jesus Corner,” a literal storefront which required the removal of a portion of exterior wall; or Chris Larson’s wood sculpture, “Pause (the Dukes of Hazzard ’69 Charger Ted Kaczynski’s Montana Refuge)” that depicted a full-size classic car crashing into the Unabomber’s cabin.

The motifs in the ship’s surface, and the gulf between those shapes and colors and her subject matter, are one of the installation’s unexpected qualities. Angled, sometimes curving but always inviting shapes in gray, green, blue, pink, mauve, yellow, aren’t the typical wartime color schemes you’d expect — they’re not somber. She repeats the pattern and palette throughout the room. Even the frames for her drawings and paintings repeat the idea, complete with a tiny carved battleship in the lower right corner.

Again, she said the colors were born of the type of clay she was using. It looks candy-colored to her now. (She worked in a chocolate shop when she was young, and opened one in Idaho as an adult.)

Both associate curator John Calsbeek and Laura Millin, the MAM’s executive director, pointed out the feminist slant imbuing the work all around the galleries.

A nearby installation, for instance, conjures women’s experience of the war in detail. Lysohir constructed a domestic scene with a full-sized female figure, clad only in a bath towel. She faces a bathroom sink, its rim lined with toothbrush, paste, soap and washcloth. The cabinet’s mirror door is left ajar, revealing interior shelves occupied by three tiny battleships. The tub to the right, based on the one in Lysohir’s childhood home and likewise hand-built from clay, is filled with just enough “water” to float yet another ship, signaling the war’s ubiquitous place in people’s consciousness.

The paintings and drawings feature a ship held aloft by branches, signaling support or growth.

She’s open to interpretations. “Something can look at the same thing but come away with a different feeling about it, but that’s what’s so intriguing about art, and you just want people to experience it whatever way they want,” she said.

Marilyn Lysohir’s exhibition, “The Dark Side of Dazzle,” is on display at the Missoula Art Museum through Dec. 17.

“Ukraine War: A Watershed Moment for the World”

In commemoration of International Day of Peace, the MAM and the Montana World Affairs Council and the Jeanette Rankin Peace Center. We hope you will join us to hear Dr. Heather Ashby from the U.S. Institute of Peace and former US Ambassador Bob Loftis discuss Ukraine and its impact on international peace and security.

Come share stories on Veterans Day eve, Nov. 10, 6:30-8 p.m. In honor of Lysohir’s exploration of oral history, visitors are asked to gather and share memories or excerpts from letters of their veteran family members or experiences in times of war.

Things to do in Missoula: Dance, swing, read

Here’s a quick guide to some upcoming arts and cultural events happening around Missoula in the week ahead.

Bare Bait Dance is starting its 12th season with a three-day “road show,” performing original work outdoors at locations around the city.

Western Montana would serve as a way out of suffering for Drew Landry after a near fatal crash in 2015.

Missoula artist painted scenes close to home (and the water)

The Missoula artist’s new series, “Love Letters of Missoula,” on view at the Radius Gallery, depicts scenes around the city.

The Last Glacier: Making art in a changing landscape

Movies in a Minute: "Spoiler Alert"

Prince Harry has 'no early memories' of Princess Diana

Prince Harry has 'no early memories' of Princess Diana

Marilyn Lysohir sits next to her 24-foot ceramic battleship, a part of her exhibition, "The Dark Side of Dazzle," at the Missoula Art Museum.

Marilyn Lysohir places one of the ceramic turrets atop the 24-foot ceramic battleship.

A 24-foot ceramic battleship, a part of the Missoula Art Museum's The Dark Side Of Dazzle exhibition.

The Missoula Art Museum's "The Dark Side Of Dazzle" exhibition.