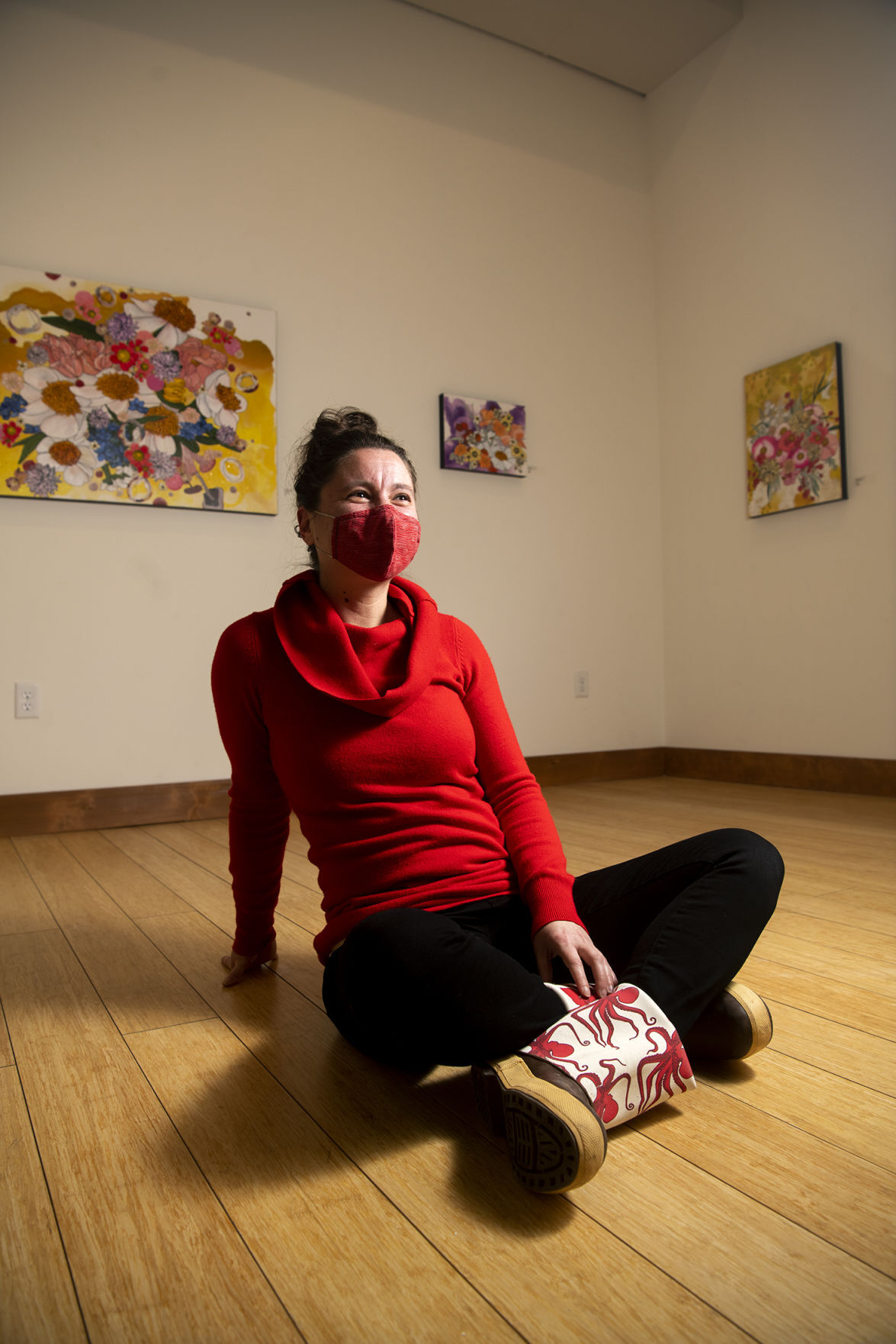 Heather Stockton's exhibition "The Secret Garden Series: What's Old and is New Again" is on view at the ZACC through the end of the month. 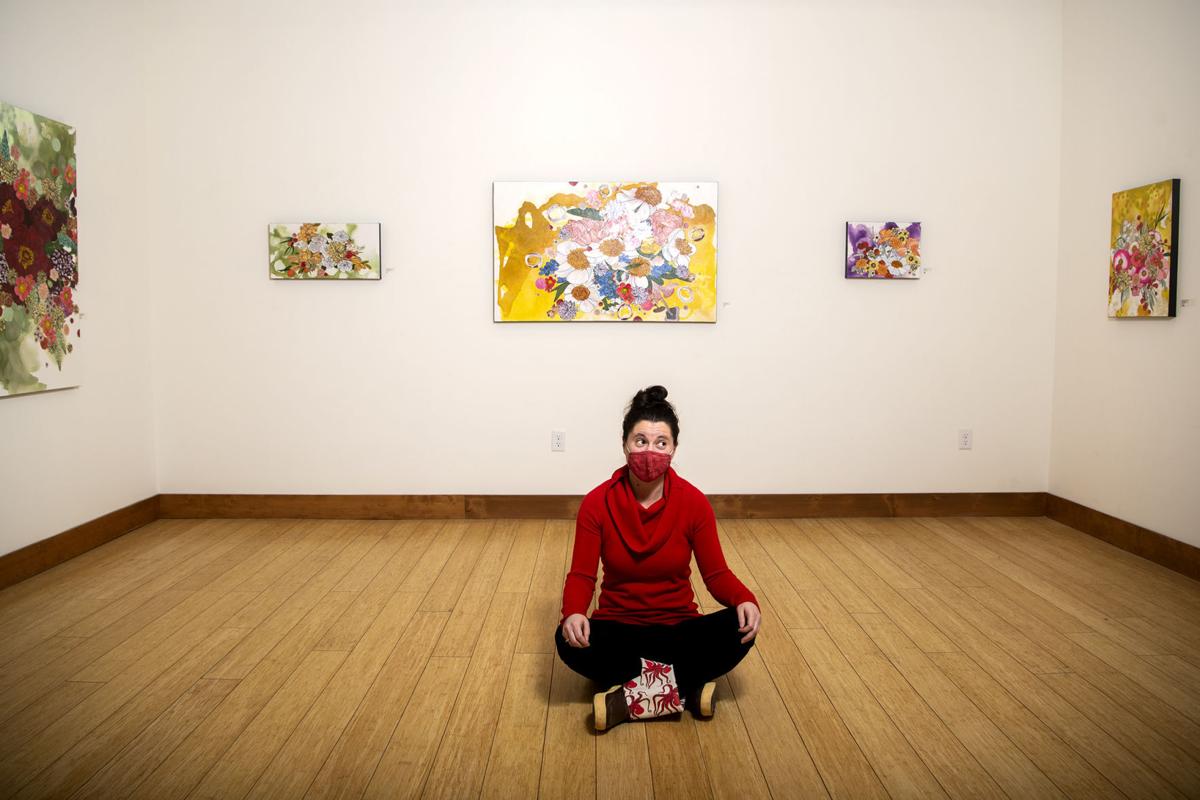 For the past five years, Stockton served as the operations director at the ZACC, which generally speaking means she needs to “make sure the ZACC doesn’t fall apart.” 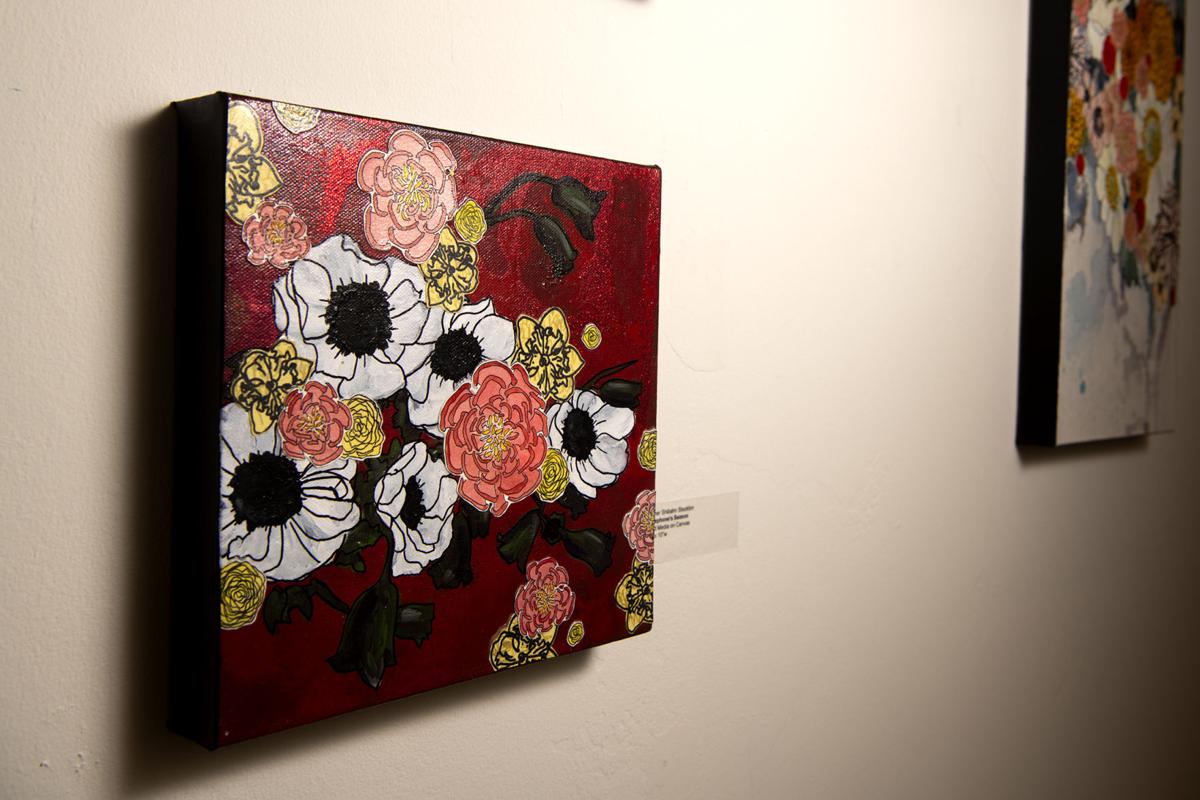 Stockton's piece "Persephone's Season" on display at the ZACC.

For a long time, Heather Stockton’s art was preoccupied with interpersonal relationships and death. Over time, it’s become more inward-facing, and rather than using the figure, her main subject has become flowers.

The bouquets, in a collage of techniques and hot palette, explore questions to her: “What do you want to do in the later years of your life? Is that really what you want? Have you taken any steps to get there?” she said.

Her exhibition, “The Secret Garden Series: What’s Old is New Again,” feels especially brilliant thanks to the timing — it’s on view through January at the Zootown Arts Community Center.

She builds the bouquets out of a collage of elements — some might be hand-painted, others are silk-screened cut-outs, interspersed with some unidentifiable elements. (More on those later.)

The flowers might be drawn from photos, but are stretched and layered into the realm of imagination. Since her purpose isn’t straight representation, the colors aren’t either. “I can push that limit,” she said. In keeping with the series’ theme, “your mind’s a garden, and you can do whatever you want.”

“These flowers don’t have to be a certain shape or size or anything like that,” she said.

For the past five years, Stockton served as the operations director at the ZACC, which generally speaking means she needs to “make sure the ZACC doesn’t fall apart.” That includes maintenance on the website and around the building, keeping supplies in the various departments stocked, filling in as needed and teaching youth and adult art classes.

Prior to the ZACC, she worked at the Bitterroot Flower Shop, which included arranging bouquets, a somewhat similar process to her painting. She starts a base layer of washy acrylic, then begins adding and adjusting until the final composition suits her.

Some of the paintings have Easter eggs, items that are significant to her but remain ambiguous to the viewer. Some appear to be cut-up journal entries with large, loopy handwriting in colorful pen that’s difficult to decipher. Those come from the journals of her older sister, Rhiannon Swartz. She has developmental disability, and for her entire life has used journaling as a “way of processing the world,” written quickly and indecipherably, even to her. (She uses an iPad when she wants to use writing to communicate.)

Rhiannon sends her these voluminous old journals for the ongoing art projects. “She has a very unique perspective on the world,” Stockton said, and her writing fits within the idea that our consciousness is a secret, even when expressed. Their other sister, Yvonne Hammond, earned a doctorate in literature and helps with the titles, which often have literary references such as “Icarus’s Bounty.”

There’s a repeated circular element in the paintings — a dark red and white in color, with a hole cut in the middle and circles of twine stitched in. Her mother is a geriatric social worker, and the photos are of her clients. (Stockton cuts out the outline of their faces and in the process destroys the record.)

Prior to the “Garden” series, Stockton’s work was preoccupied with death and dying in our culture, and often in the form of portraits. Because of her mother’s work, and later the death of her lone grandparent, her “artistic inspiration was built around death and the dying process, and what that means and looks like as far as our relationships to ourselves and our relationships with our family.”

Several years ago, spurred by the need to make a few pieces for an auction, she began the flowers. Those were more outward looking, while these are pointed inward while using the same set of techniques.

The second half of the title references the fact that she’s used some older materials and techniques, and from a personal perspective, an experience with a person from the past that cropped up during the pandemic.

“I feel like maybe this show’s dripping a little bit more emotion than I normally would have, but I feel it and I know that some other people have felt that, too.”

Heather Stockton’s exhibition, “The Secret Garden Series: What’s Old is New Again,” is on view at the Zootown Arts Community Center through the end of the month. Hours are Monday-Saturday, 10 a.m.– 6 p.m. and Sunday 12-4 p.m. Masks are required.

A total of 50 nonfiction feature films and 95 shorts from around the world will play.

Justin Timberlake 'will be in Janet Jackson documenty'

Justin Timberlake 'will be in Janet Jackson documenty'

Heather Stockton's exhibition "The Secret Garden Series: What's Old and is New Again" is on view at the ZACC through the end of the month.

For the past five years, Stockton served as the operations director at the ZACC, which generally speaking means she needs to “make sure the ZACC doesn’t fall apart.”

Stockton's piece "Persephone's Season" on display at the ZACC.