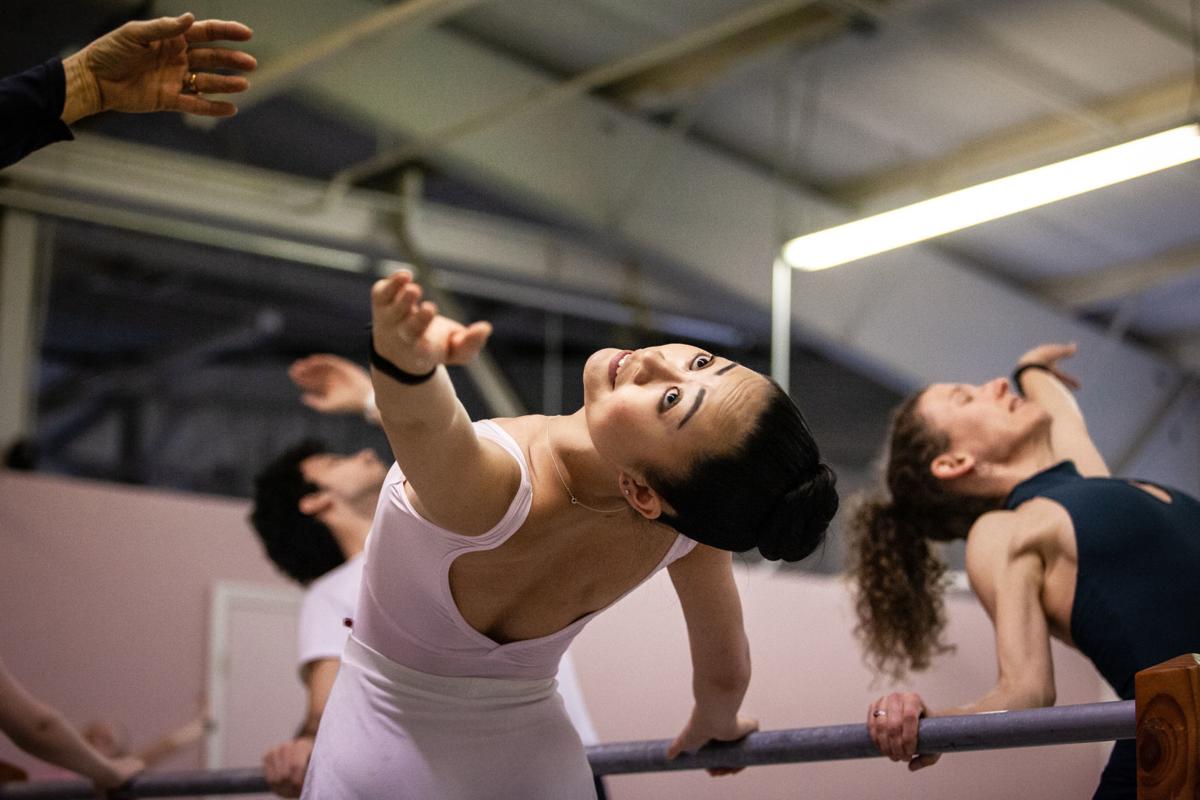 Canadian ballerina Marsha Kwan practices on the barre during a Friday morning class at the Rocky Mountain Ballet Theatre last week ahead of her performance at Ballet Beyond Borders. Kwan returned to the festival for her second year in a row, and says she enjoyed the collaborative atmosphere of the event last year. 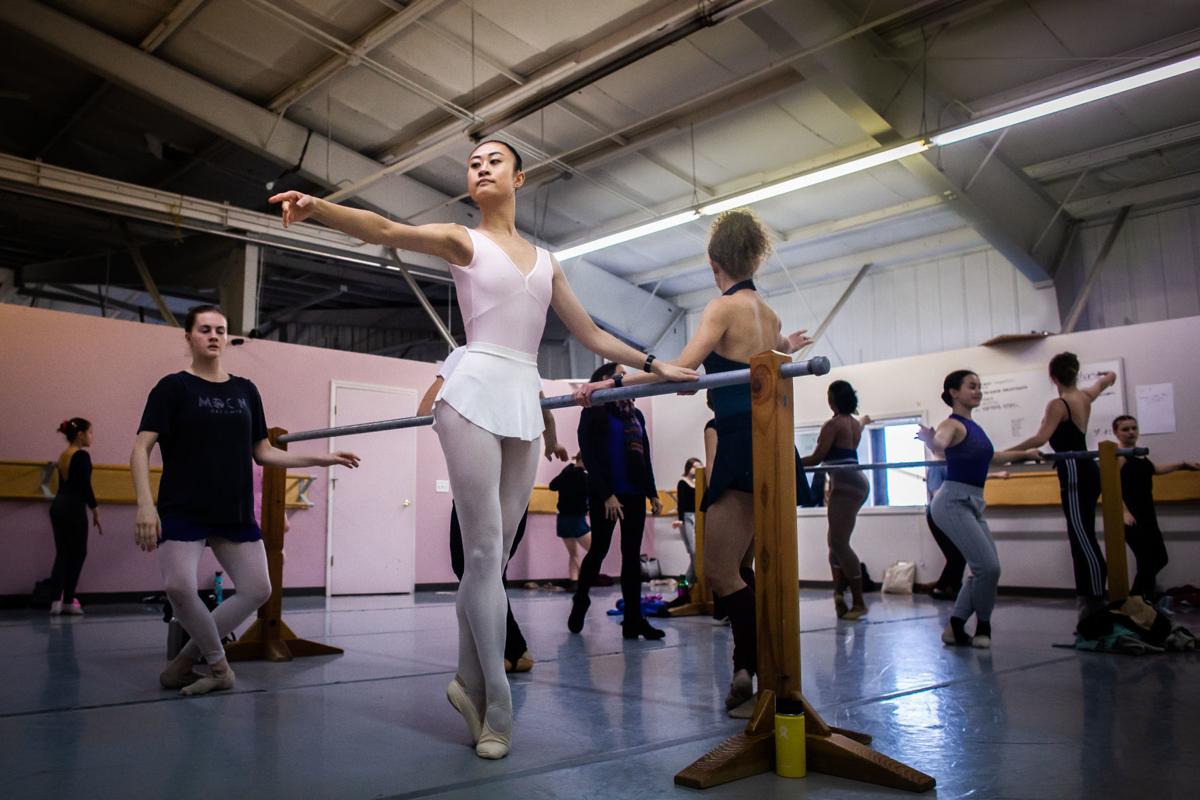 Kwan said Ballet Beyond Borders helped rekindle her inspiration. “I’ve been here since the 26th of December and since then I’ve been working a lot on my contemporary and it’s kind of sparked a new inspiration for me to continue dancing," she said. 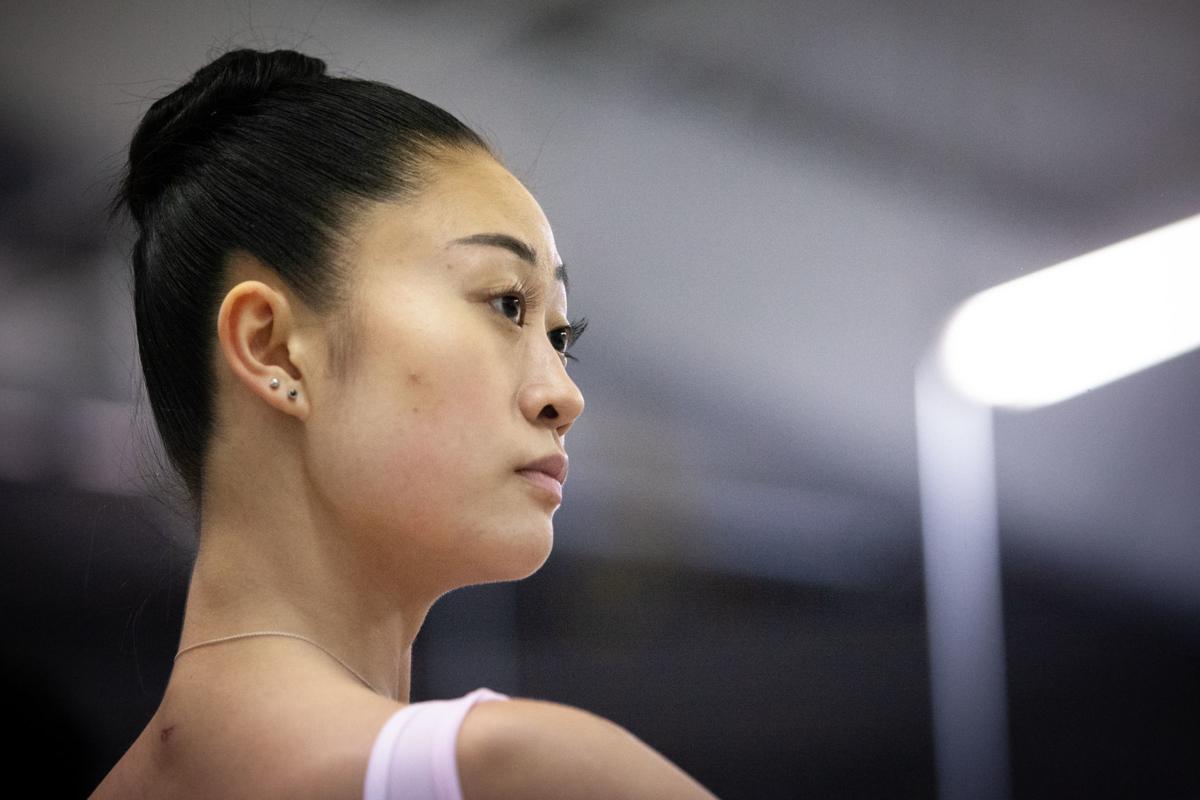 “Dance is a universal language," Kwan said. "There are so many people here and not everyone speaks the same language. Dancing is a form of communication or a way to express yourself that everyone can understand.”

Canadian ballerina Marsha Kwan practices on the barre during a Friday morning class at the Rocky Mountain Ballet Theatre last week ahead of her performance at Ballet Beyond Borders. Kwan returned to the festival for her second year in a row, and says she enjoyed the collaborative atmosphere of the event last year.

Kwan said Ballet Beyond Borders helped rekindle her inspiration. “I’ve been here since the 26th of December and since then I’ve been working a lot on my contemporary and it’s kind of sparked a new inspiration for me to continue dancing," she said.

“Dance is a universal language," Kwan said. "There are so many people here and not everyone speaks the same language. Dancing is a form of communication or a way to express yourself that everyone can understand.”

This past summer, 22-year-old classically trained ballerina Marsha Kwan stopped dancing completely. She was drained from the intensity and harsh realities of auditioning for companies in the cutthroat world of professional dance.

On the verge of hanging up her ballet slippers for good, the Vancouver, British Columbia-based dancer received an invitation to attend Ballet Beyond Borders in Missoula.

“I came here and I just feel like I still want to dance. I’m not done,” Kwan said during a break from rehearsals last week at the Rocky Mountain Ballet Theatre. The Missoula school puts on the four-day international dance and cultural festival, which started Wednesday and runs through Saturday, Jan. 11. It includes a competition, master classes and a diplomacy conference.

Charlene Campbell Carey, president of Ballet Beyond Borders and artistic director of the Rocky Mountain Ballet Theatre, called Kwan this summer and urged her to attend the festival.

It was a welcome call for Kwan, who was fresh off a string of disappointing auditions and questioning her future as a ballerina.

“There’s always something that you need to perfect, something else you need to work on because there’s always someone better than you,” Kwan said. “Something just changed in me after auditioning. I saw everyone else out there and even though I would leave an audition feeling good about how I did, it was never enough.”

Sometimes the choices can even be based on “a certain look” they may want, she said.

“If you’re not what they’re looking for, they just can’t take you, no matter how good you are.”

Eventually she started to wonder what the point was if she wasn’t even enjoying herself anymore.

Kwan didn’t hesitate to accept Carey’s invitation, as the two have known each other since 2016 and Kwan has attended Ballet Beyond Borders before. But she hadn’t been training for a while, thinking she was calling it quits. The invitation ended up being the spark that got Kwan to put her ballerina slippers back on.

“I was like, 'OK, I've got to get training,'” she said, adding she went back to classes and guested as the Sugar Plum Fairy in a production of "The Nutcracker" in December to prepare.

“I’ve been here since the 26th of December and since then I’ve been working a lot on my contemporary and it’s kind of sparked a new inspiration for me to continue dancing.”

Kwan, who is of Chinese descent, found dance at a young age growing up in Vancouver.

“My parents signed me up for literally everything they could sign me up for because they didn’t have the opportunities to do this kind of stuff when they were younger,” she said. “So they thought I should get to do everything. I did ballet, gymnastics, swimming, skating, violin, piano — I did it all.”

But she said ballet spoke to her, so she stuck with it. She trained at the Goh Ballet Academy in Vancouver for 16 years, dancing in their productions and performances.

When Carey spent time at the Goh Ballet Academy as a guest instructor in 2016, the two bonded and discussed Kwan’s career and future as a dancer. Kwan ended up attending a dance festival in Missoula called VIBE that same year.

VIBE USA, or the Vienna International Ballet Experience USA, was held in 2016 and 2017 in Missoula and was similar to and somewhat evolved into what is now Ballet Beyond Borders.

Kwan loved that the festival wasn’t just about competing, dancing perfectly and winning, but about community and cross-cultural relationships. She came back for VIBE 2017 as well as Ballet Beyond Borders in 2018.

“I just kept coming back because Ballet Beyond Borders is where I actually really push my limits. I feel like it’s a place where I’m not judged and I’m comfortable,” she said.

Dancing at the event was the first time she didn’t feel like she had to be perfect or the best.

“I was always super-competitive and if I didn’t win, it was the end of the world. And that’s a terrible mindset,” she said. “But last year, because it was my first time being coached by someone else for a very long time, and they just kind of told me to enjoy myself on stage and just dance and show them why you love to dance.”

While everyone has technique, she said Ballet Beyond Borders puts more focus on artistry.

“How you interpret everything is how you stand out,” Kwan said, adding that after her performances last year, she received several congratulations and positive feedback from fellow competitors, instructors and dancers.

“That beats any medal, any trophy, because at the end of the day, that’s just an object that you’re going to put aside, but the words are what you keep with you forever.”

Carey seconded that point, saying the festival isn’t about who wins the competition, but about the global dance community they’ve formed.

“Some of the medalists have maybe not gone much further, and the ones that came with the bigger picture, are really flourishing,” Carey said. “It’s not just the best of the best, it’s these stories. It’s about what we have in common.”

A bonus for Kwan came at VIBE 2017, when she met her partner in dance as well as in life, Giovanni Giordano, of Naples, Italy. The two have been together ever since.

Carey calls them “the Ballet Beyond Borders couple,” and Kwan doesn’t mind.

“It is so amazing to get to dance and travel with someone who shares the same passion as you,” Kwan said. “It really helps because we both know we are working hard to achieve the same dream and to be able to work towards that together is so special.”

Both are here for Ballet Beyond Borders 2020, which Kwan said is like a little vacation for them.

This year will be the first time she’s performing together with dancers from the Rocky Mountain Ballet Theatre in Missoula.

“It’s so different dancing with other people that you haven’t danced with before because in groups we have to be so synchronized,” she said. “After a couple days we got used to it and things are going really well and I’m having a lot of fun with them because they’re all such nice people and genuine dancers.”

All of the pieces she’s performing tell a story, but one stood out to her. She and Giordano are performing a duet, in which he portrays your everyday person and Kwan portrays passion.

“Passion is a huge part of everybody’s lives and that can be either positive or negative. It is an uncontrollable emotion that you can choose to follow or leave,” she said, adding the piece asks the question of whether it is passion that dies or if it’s the person that dies.

While she’s excited to compete, Kwan said she loves Ballet Beyond Borders because she gets to work with choreographers from around the world.

“It’s nice having master classes with people you haven’t had class with because you get different information and you hear different corrections that you haven’t heard before and it just helps you grow as a dancer.”

Carey said many dancers are exposed to future opportunities while attending the event.

“This is the steppingstone for their next career move,” she said. “You come here, you’re going to be seen by literally 20 to 50 of the best in the world.”

And in addition to bolstering career prospects, Kwan said she gets to meet dancers she wouldn’t at other festivals and hear their stories, which is the best part.

“Dance is a universal language. There are so many people here and not everyone speaks the same language. Dancing is a form of communication or a way to express yourself that everyone can understand.”

Ballet Beyond Borders continues on Friday, Jan. 10, and Saturday Jan. 11.

Friday's schedule includes the Dance Challenge Open Category and Contemporary Category finalist performances in the morning and Ballet and Young Choreographer finalists in the afternoon at the Dennison Theater at the University of Montana. The Dance Challenge events are free and open to the public.

Saturday's schedule includes the "Creative Crossroads" Diplomacy Conference at the University Center from 9 a.m.-1 p.m., followed by the awards ceremony, both free and open to the public.

The festival concludes with the Gala Finale at 6 p.m. at the Dennison Theater. For a detailed schedule and to purchase tickets to the Gala, visit rmbt.org/bbb.

Lillian Pitt's most recent work is currently on display at the Missoula Art Museum’s Frost Gallery in a solo exhibition titled “Honoring My Ancestors.”