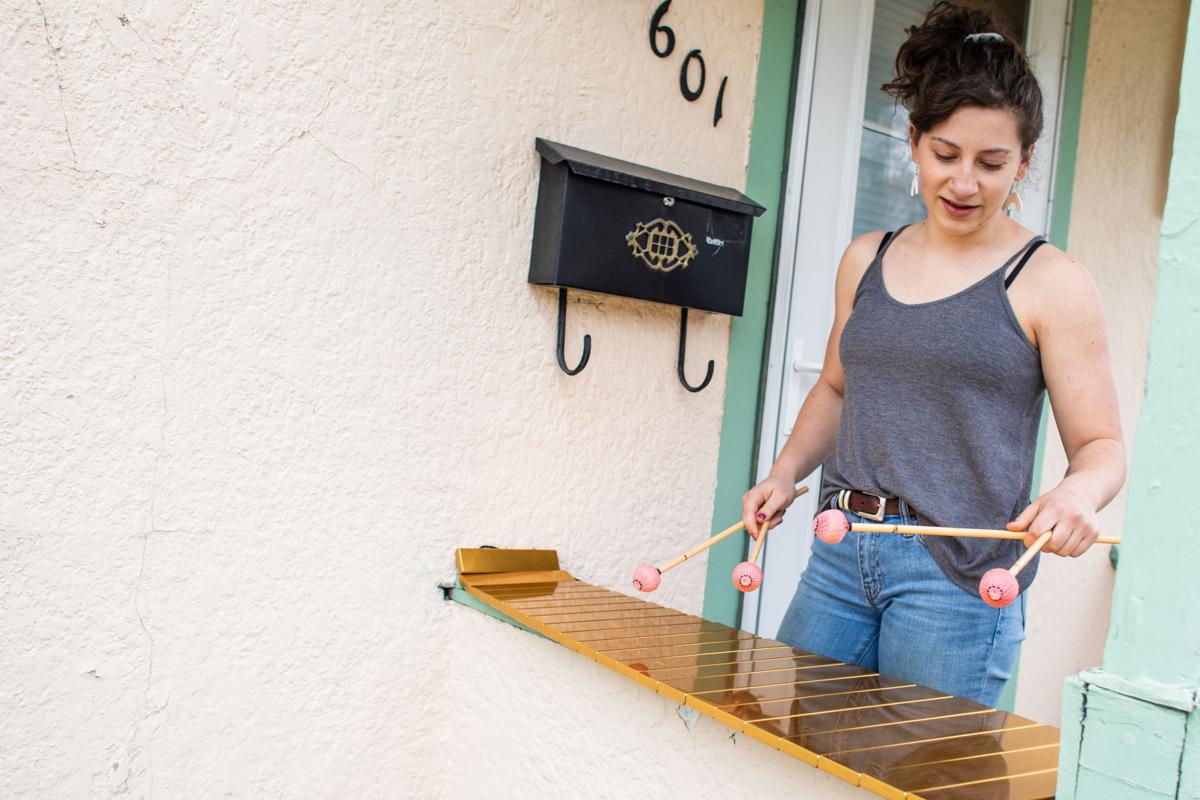 Rosie Cerquone practices with her vibraphone in front of her home in April 2020. She's performing at the Giggle Box as part of the Big Sky Fringe Festival. 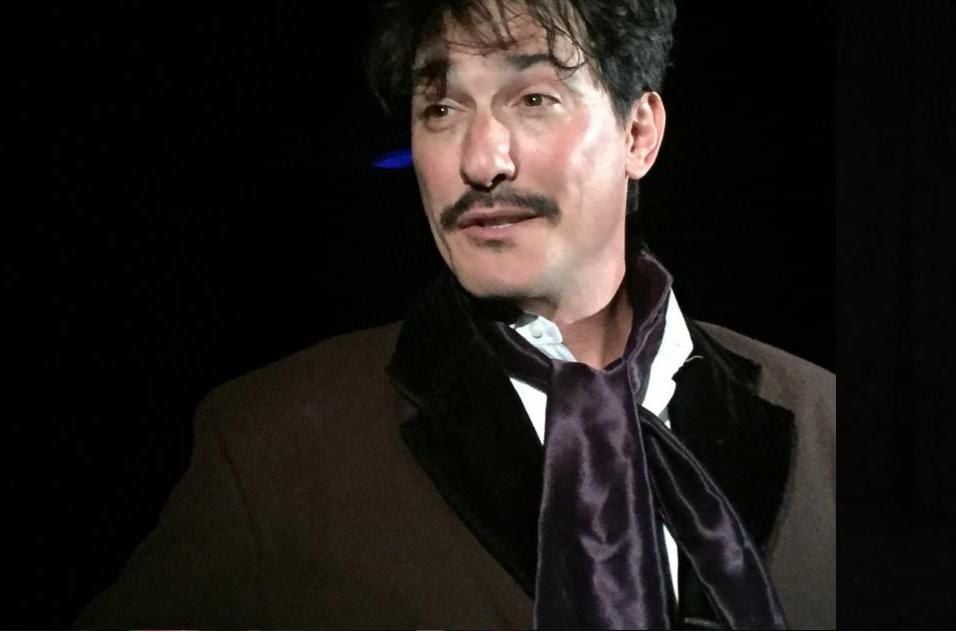 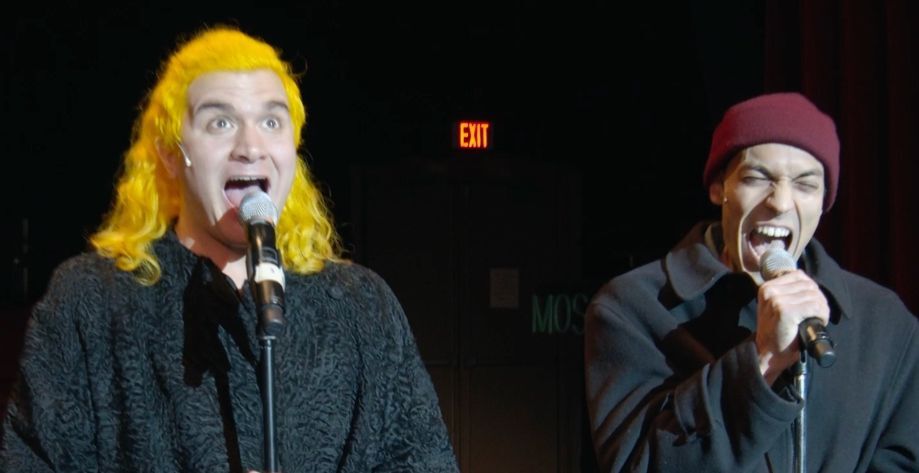 Mazana Boerboom for the Missoulian

“Fringe is an uncurated type of performing arts festival,” said Victoria Watson Winkler, the event’s director, adding that each performer entirely produces their own work. “It's all about community, it's all about creation and really getting new art, or new renditions of old art, out there for the world.”

The festival was meant to debut in May of 2020, but COVID-19 upended those plans. Now a year later, Big Sky Fringe is launching a small festival that is mostly virtual as the world continues to transition out of the pandemic.

There will be four live shows: two at Imagine Nation Brewery, one at the Giggle Box and one at Westside Studio, along with two in-person screenings, also at Westside. The rest of the festival will be held virtually, with a majority of screenings on Vimeo and a few interactive presentations on Zoom.

Winkler said all venues have COVID-19-safe plans to remain at partial capacity and disinfect routinely. Imagine Nation will hold both of its events on its outdoor patio.

There are 21 performances in all, bound by no rules, curators or expectations.

“Fringe is one of my favorite mediums, just because of that whole idea of no rules,” she said. “Basically the general rule of fringe is don't be a jerk.”

Winkler’s hope is to create visibility for the festival and bring some joy to performers and viewers alike. She wants to share the community-driven nature of fringe with a place she’s come to love for its support of the arts.

She moved here from California a few years back after spending months at a time in Missoula with her husband, who was working on a production in the area. The two fell in love with the state and the town and one of her big goals when she moved here was to bring back the fringe festival.

“I love seeing, dare I say, this little pocket of love of the arts and sort of liberality about life, in what most people would consider a harsh region,” Winkler said. “There's actually so much life and so much art to be had (here).”

Winkler's many connections to the local art community helped her get the festival of the ground, and she said others she hadn't met stepped up as well.

“The biggest thrill of it was how many people came on board that didn't know me personally, that hadn't already worked with me in some regards,” Winkler said. “They just saw a notice about the festival or heard about it from somebody else and said 'Yes,' and jumped on. The number of people who said they were just so excited to be performing again after such a long dark time is incredible.”

She highlighted a few performances she thinks show the versatility and diversity of fringe festivals.

Juliana Heng explores her own life as an autistic person living in Malaysia through “Walking on Spectrum,” a one-person virtual show that mixes comedy, storytelling and spoken word poetry.

Brian Feldmen, from D.C., will interact with his audience on “#txtshow (on the internet).” In this live Zoom event, Feldmen will perform a show as it's written by the live audience.

“Countdown to Clowntown” is a kid’s musical and dance piece performed by a Canadian clown band.

Written and directed by Lloyd J. Schwartz and Clinton Case, “An Evening With John Wilkes Booth” is a virtual show that takes a look at the infamous assassin of Abraham Lincoln.

“Imagination and Monsters,” one of the live events, is a series of monologues and stories written and performed by the Pandemic Players during the isolating year of COVID-19. They’ll tackle issues like trauma and the death of George Floyd while sprinkling in some comedy.

“I Am An Actress: A Passion Play,” is a one-person virtual show by Portland-based transgender actress Jane Comer on how she overcame a speech impediment and gender dysphoria to pursue her passion of acting.

Another of the live performances, “Rosie CQ and Co,” will be performed by Missoula born-and-raised Rosie Cerquone at the Giggle Box. Cerquone’s style mixes indie, pop and jazz with a focus on percussion.

“I just kinda jumped at the chance to be able to play this music for the community that was so huge in getting me to where I am today,” Cerquone said.

Cerquone graduated from the University of Montana in Spring 2020, but wasn’t able to perform the pieces she’d been working on as a senior to a live audience because of the pandemic. Since then she’s released an album called “The How and the Why” and moved to Spokane, but she missed playing live music in her hometown.

When she heard about the fringe festival in Missoula, she was excited to have a chance to go back for a live show and was just intrigued by the uncurated nature of it.

“The fact that it's open to whoever wants to add their piece is just really cool,” Cerquone said. “And there's not a lot of things that happen on a large scale like that.”

Her venue, the Giggle Box, is an immersive experiential art museum in the Southgate Mall. The colorful and fun venue is the perfect venue for Cerquone’s style.

“It's just this more intimate style setting for live music and all of the events they do there so I'm very excited that we're getting a play there,” she said.

Cerquone will play music from her recently released album, along with several of her unreleased songs. She’ll sing and play the vibraphone while fellow UM grad Haydn Halsted accompanies on drums.

“I know that for a lot of people, this will be the first re-introduction to live music in a long time,” Cerquone said. “And so honestly, I just want it to be just a really, really fun night where you get to sit and enjoy music in the company of strangers.”

For those not yet ready to return to live shows, there’s still a cache of fun and interesting virtual performances to choose from. Winkler hopes that by next year the whole festival can be live and that in five years they’ll take over downtown for a weekend with the spirit of fringe art.

“I want people to really get into this creative, artistic spirit and experience the joy of all these varieties of entertainers,” Winkler said.

The Big Sky Fringe Festival runs from May 20-23, with events online and in person at select venues. Go to bigskyfringefestival.org for a full schedule and ticket information.

A splashy new mural has gone up to complement the interactive kids’ water exhibits at the Missoula Public Library.

A Missoula teacher bares his politics in his portraits

Rosie Cerquone practices with her vibraphone in front of her home in April 2020. She's performing at the Giggle Box as part of the Big Sky Fringe Festival.