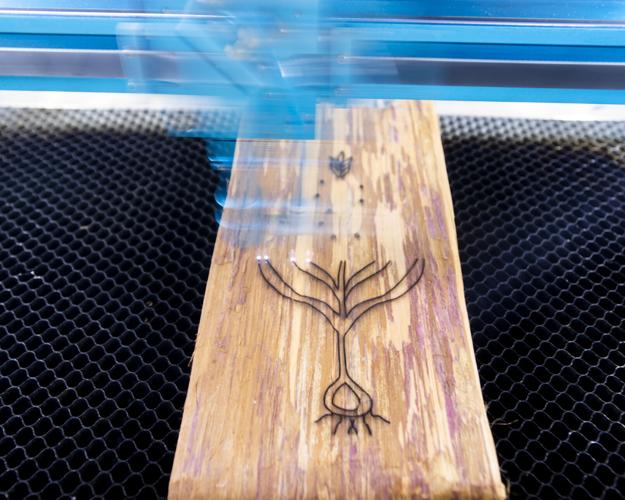 A laser engraves a design onto a Salish cedar bark basket made by Aspen Decker at the MakerSpace in the Missoula Public Library last week. They’ll go on display at the library on the third floor in November for National Native American Heritage Month. 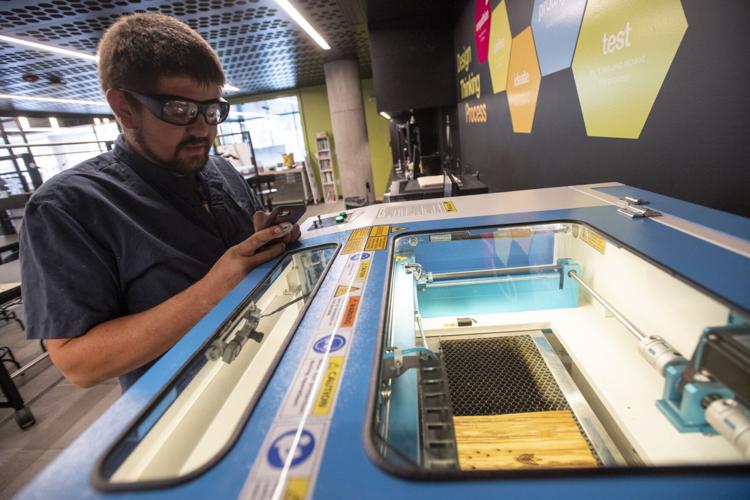 Cameron Decker watches as a laser engraves a design onto a cedar bark basket at the Missoula Public Library last week. 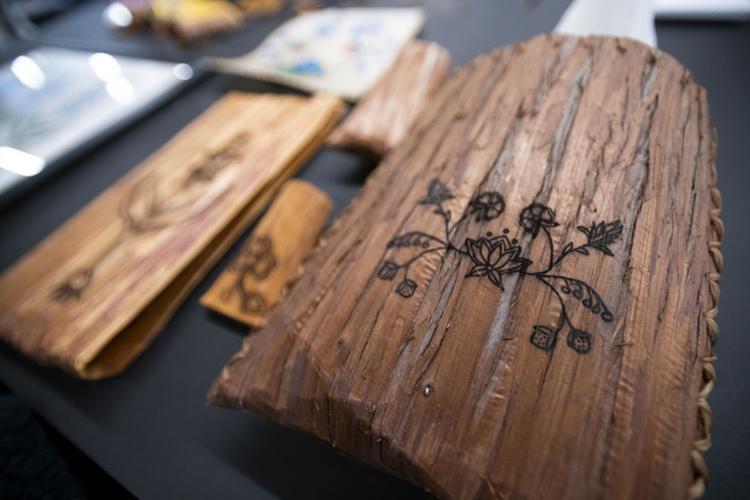 The smell of the forest was in the air last week in the otherwise sleek new MakerSpace, the corner of the Missoula Public Library stocked with equipment like a 3D printer, CNC router and a laser cutter-engraver.

Placing a traditionally made Salish cedar bark basket in for some decorative burn lines was a new adventure. After a minute of the laser darting back and forth underneath the protective glass, a design that Aspen and Cameron Decker brought in on a flash drive was emblazoned onto the surface of the container.

The Deckers have two Montana Conversation events related to their projects at the Missoula Public Library.

One bore blue camas, Indian paintbrush and some chokecherries, in lines that were so clean that Cameron, an artist, marveled at the level of detail.

They’ll go on display at the library on the third floor in November for National Native American Heritage Month, along with some of Aspen’s ledger art (also with blue camas) within a general theme of seasonal gathering.

It’s a public display of a new venture from the Deckers called Xʷlxʷilt (“Alive and Well”) Séliš Education Integration. The two, who are raising their four children with these practices, launched it earlier this year with help from a grant from the Montana Arts Council and the National Endowment for the Arts.

Through the project, they bring traditional practices and knowledge to classrooms through videos and in-person appearances in ways that are respectful and appropriate and weave in culture and language.

“As an educator, I think it's important that we're continuing to share the knowledge of our Salish culture and ways — and a lot of our language is embedded within our culture and vice versa,” she said.

For instance, they’ve created print-outs that include Salish language and culture that related to the basket.

Aspen is an educator and enrolled member of CSKT; She grew up speaking Salish and is one of the last fluent in the language, and earned her master’s degree in linguistics at UM.

Cameron is a Salish descendant who’s enrolled Dine (Navajo). He was chair of the art department at Salish Kootenai College and, until this venture, was working as the education and outreach coordinator at the Missoula Art Museum. He recently completed his master’s degree in Integrated Arts Education through the Creative Pulse Program.

For educational purposes, they’ve also done versions for classes that use paper and printmaking materials — that’s more sustainable, and doesn’t require the most time-consuming aspects of harvesting, such as seeking out the trees (There are also issues related to sharing locations).

Aspen had a “very traditional and cultural upbringing.” She made her first basket when she was 12, and it lasted 15 years. Only recently did they have to retire it and put it on display only.

She said cedars are used for a variety of purposes, including full dugout canoes.

Bark is harvested in strips that, when taken correctly, will leave a scar that heals. “We’re very deliberate in how wide we cut the cedar bark. A lot of our elders say don’t go any wider than your shoulder, or two hands.”

She said that knowledge goes back 14,000 years, citing the original Bitterroot-Salish name for Missoula — Nmesulétkʷ, which means “Place of the Freezing Water,” in reference to Glacial Lake Missoula. (She cited work by Dean Nicolai, a CSKT member and researcher, on “culturally modified trees" and dates and cycles of use.)

The bark repels rodents and bugs, prevents molding for food storage, which could include most anything they harvested, dried and kept for the winter.

Here are the steps in the process, according to Aspen.

First, they give thanks and gratitude to the tree. Next, they measure where they’re going to cut, ensuring that their section won’t exceed two hands’ width. After scraping off some of the rougher bark, they start cutting at the bottom, and gently running a hand underneath to make sure there’s no cracking in the bark as they move upward. After it’s peeled, they make a bend at the center — it depends on what size of basket you want. She’s made one that’s large enough to sling on like a backpack for harvesting plants like blue camas, sage or cattails and other native plants with stalks that can be used.

After soaking and drying, they fold it in place and stitch in the sides of the basket, and use a length of willow to prop the rim open.

In the Creative Pulse program, Cameron said they taught kids about the layers of the trees through movement games that help convey the science in a memorable way.

“You can adapt that game with the cedar bark to really help kids understand that it’s not just a bark basket. There are two layers there, and that’s precisely why it’s OK for the tree, because the cambium layer is the one that grows. So while it scars the tree, it’s going to grow back because we’re not taking the parts that grow back,” he said.

Among their next steps, now that they’ve completed the baskets, is in the spring — working on a full dugout canoe.

The Wailin’ Jennys perform at the Wachholz College Center in Kalispell on Nov. 4, and the Wilma in Missoula on Nov. 5.

The Missoula Symphony Orchestra’s next concert is a tribute to superheroes.

Look at photographs the analog way at the MAM

Think about how many images are uploaded to the cloud every day. You couldn't count how many you see every day between all your devices. How o…

Things to do: Jazz, condensed Shakespeare and 'Call of the Wild'

The 10-song outing is steeped in thumping grooves and vintage disco vibes.

A laser engraves a design onto a Salish cedar bark basket made by Aspen Decker at the MakerSpace in the Missoula Public Library last week. They’ll go on display at the library on the third floor in November for National Native American Heritage Month.

Cameron Decker watches as a laser engraves a design onto a cedar bark basket at the Missoula Public Library last week.