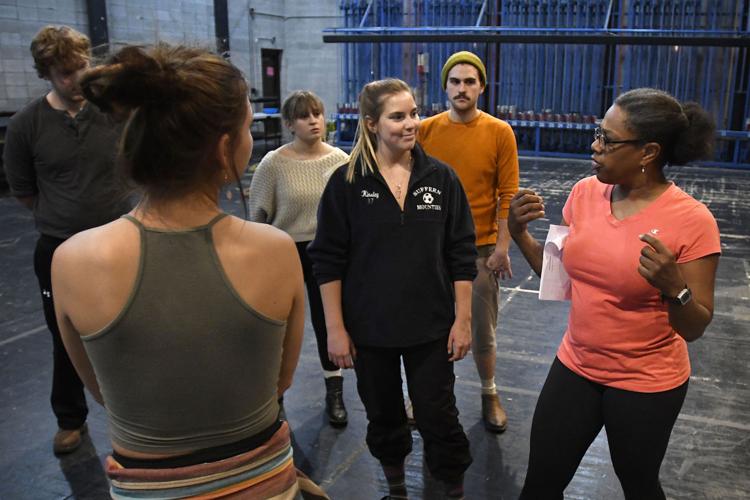 Veteran New York dancer Allison Easter talks to University of Montana students in a rehearsal in October. Easter's visit to Montana in mid-October was just one step in producing "A Celebration Service" by New York composer-choreographer Meredith Monk. Easter, a member of Monk's ensemble, was here for three days to work with them on the choreography, offering first-hand knowledge of the piece. 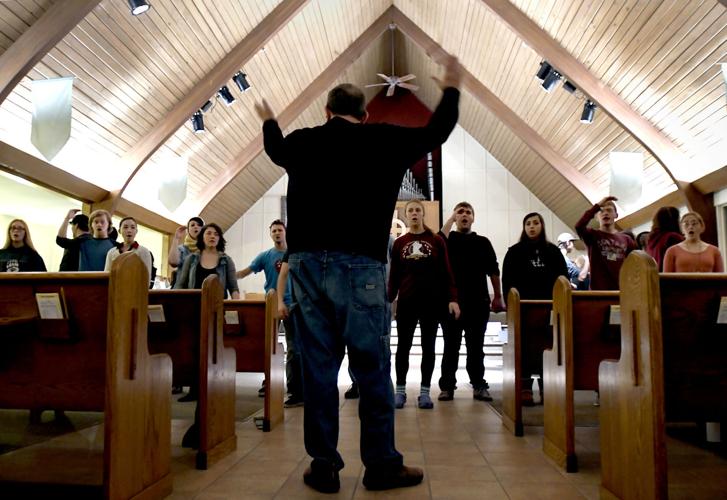 Tom Bogdan leads the UM Chamber Chorale in a rehearsal Wednesday evening at the University Congregational Church for this weekend's performance of Meredith Monk's "A Celebration Service." Bogdan was part of the original ensemble that premiered the piece written by Monk in 1999.

Allison Easter led the count of seven beats on the stage of the Montana Theatre. Then an ensemble of University of Montana students began following the veteran New York dancer's circular movements set to a trance-inducing rhythm and based in part on the shape of the mandala.

Easter's visit to Montana in mid-October was just one step in producing "A Celebration Service." The dancers had a list of movements three pages long to memorize and rehearse. The UM Chamber Chorale had an hour's worth of contemplative, hushed music.

The world-renowned composer-choreographer Meredith Monk wrote the multi-faceted piece in 1999 to mark the new millennium. The work, which incorporates poems and readings from Buddhism, Sufi and Christian traditions, is "a celebration of community and coming together" that's especially appropriate for the coming of winter, said Nicole Bradley-Browning, the UM dance professor who's overseen her discipline's half of the production.

For her students, it's a chance to work with top-level dancers like Easter who can "challenge them, push them, inspire them."

The piece is here in part because of Stephen Kalm, the dean of the UM School of Theatre and Dance.

"To me, Meredith Monk is one of the great artists of our time," he said, citing her career spanning from the 1960s to the present. He likes to say that Monk "wants to bypass the brain and go straight to the heart."

Kalm, who's sung at Carnegie Hall, started working with Monk in New York in the 1990s. He performed in "Book of Days," "ATLAS," "The Politics of Quiet," plus many of her concerts concerts, including a 2014 performance at Carnegie Hall of "Night," a piece from "A Celebration Service."

He and Easter were part of the original ensemble that premiered "A Celebration Service." At the time, he was a professor in the School of Music, and traveled to New York in the summer to work on it, and then returned for the premiere. Kalm said that Monk develops her pieces almost in a workshop-like manner, building from improvisations by her ensemble, which includes singers like Kalm, dancers like Easter, actors, and some who can do it all.

"She explores both musically and theatrically and choreographically," he said.

In the original piece, there were 10 performers who sang and danced. For the UM production, they decided to split duties between the UM Chamber Chorale, dance students, an organist, and two actors: Randy Bolton and Natasha Conti.

The dancers range from freshman to seniors. Bradley-Browning said they consulted with Easter before casting. Easter told them in Monk's work, the performers' interest and commitment are more important than specific technical abilities.

​Using a projection of an original production — Kalm and Easter included — Bradley-Browning and the students began working at the beginning of the semester. Easter was here for three days to set the choreography, offering first-hand knowledge and insights, which is often rare for dancers studying in the geographic isolation of Montana.

After a group gains permission to perform one of Monk's pieces from her foundation, it sends a choreographer to work with them. Tom Bogdan, another ensemble member, came to Missoula for the final two joint rehearsals at University Congregational Church. The unusual venue meets Monk's original desires: she wanted "Celebration" to be performed in places of worship.

Easter said "Celebration" can be thought of as a folk dance — average community members can do it, provided they have some rhythmic ability. That differs from some choreographers, who want dancers with specific physical attributes, she said.

Monk is "very much interested in people, interested in humanity," Easter said. Her process often means encouraging people to "bring their own individuality." The piece has a rigorous structure, but each dancer isn't required to mirror the person next to them. "They have to understand what freedom they have, and also what the structure is."

Easter said Monk's work is special to her for a variety of reasons. "I feel like I can bring so many different parts of myself to the work," she said. The vocal writing is based on classical techniques, but expands beyond Western traditional singing. The movement can be physically challenging. For her part, she can act as ambassador, teaching it to others in places as distant as Montana and Hungary.

Logan Prichard, a junior dance major, said it's been a different experience for the students. He knew of Monk's legacy, so the UM production was a "once-in-a-lifetime opportunity to be a part of this work."

He said Easter immediately went to work with them on the specifics. "She knew it in and out, backwards and forwards," he said.

He seconded Easter and Kalm's thoughts about the balance of rigor and individual voice.

"You can see from the outside that it's very intricate and specific, but it's also very personal to the performers doing it," he said.

Regarding the music, Kalm said the piece gives "a real sense of the range of Meredith Monk's vocabulary as a vocal composer and as a singer," and the way she uses different techniques to "create emotion in a stylized manner."

Professor David Edmonds is leading the UM Chamber Chorale, a credited course that draws students from all schools, with about half majoring in music.

He said the music could loosely be described minimalist, in that there's repetition with subtle changes, but it doesn't resemble the insistent, rhythmic drive of composers like Philip Glass.

"It's really about the overall effect of the layers of texture and voices," he said. It's very different from their typical curriculum, because Monk uses folk-like calling sounds, or writes repeated patterns as a basis for an improvising soloist, which is rare in Western choral music, he said.

On the Wednesday before the performance, all the varied performers came together for the first time at the church, with Bogdan leading them through.

Edmonds said the students had become vastly more comfortable with the material.

"Just like an actor puts on the makeup, puts on the costume and they finally feel their part, seeing the dancers and hearing the organ and getting in the space helps them get it," he said.

"It was a big step," he said. "After their hard work they were ready for that, and excited to see that."

"Meredith Monk: A Celebration Service," will be presented by the University of Montana School of Theatre and Dance and UM Chamber Chorale this weekend.

Performances are at 7:30 p.m. and 9:30 p.m. Friday-Saturday, Nov. 3 and 4, at University Congregational Church, located at 405 University Ave. Tickets cost $15 for general admission and $12 for students and seniors and are available at UMArts Box Office, umt.edu/umarts/boxoffice, GrizTix or umt.edu/griztix.

M. Scott Miller's night-scapes might be the perfect paintings for November, when the sun is setting earlier.

Missoula Festival of the Dead: ZACC backs out as fiscal sponsor after this year

One of the coldest Festival of the Dead processions in recent memory went on as planned Thursday, despite snow and wind that drove the tempera…

Audience enthusiasm for the Green brothers is typically measured in six-digit YouTube views.

University of Montana holds round 2 Saturday to rank what programs to keep, lose

Veteran New York dancer Allison Easter talks to University of Montana students in a rehearsal in October. Easter's visit to Montana in mid-October was just one step in producing "A Celebration Service" by New York composer-choreographer Meredith Monk. Easter, a member of Monk's ensemble, was here for three days to work with them on the choreography, offering first-hand knowledge of the piece.

Tom Bogdan leads the UM Chamber Chorale in a rehearsal Wednesday evening at the University Congregational Church for this weekend's performance of Meredith Monk's "A Celebration Service." Bogdan was part of the original ensemble that premiered the piece written by Monk in 1999.