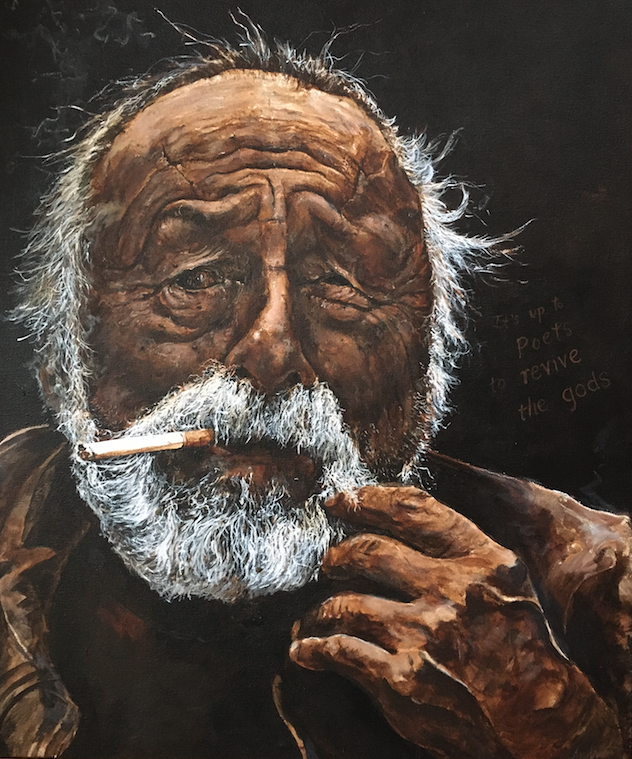 A portrait of Jim Harrison in oil by Andrew Sheldon. 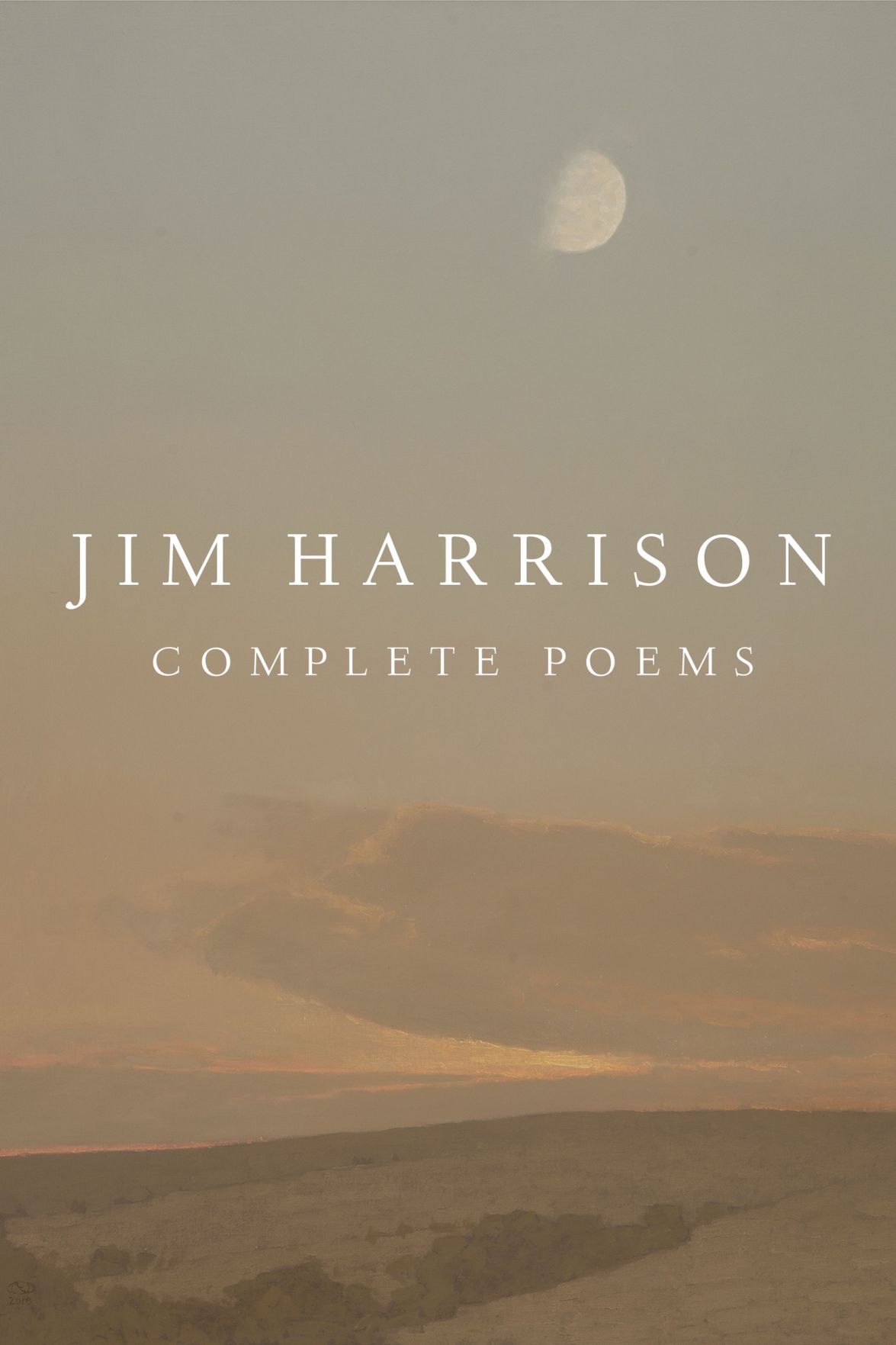 CHRIS LA TRAY for the Missoulian

When the book arrives in the mail I stare at it for a time a little dumbfounded. It is gorgeous and it is massive. By the warm light of my desk lamp, the Russell Chatham painting used for the cover image — titled “Spring Moon Over the Marshall Ridge” — reflects, as in the golden light of sunset at the closing of one of those first, most beautiful days, a perfect, dream-like mood for what the book contains.

Painted in 2018, the landscape was certainly one of the great painter’s last works. Fitting, as Chatham’s work graced the covers of Jim Harrison’s books for decades and contribute in no small fashion to each one’s overall brilliance.

This is “Complete Poems” by Harrison. Assembled by his longtime poetry publisher, Copper Canyon Press, the tome collects all 14 of Harrison’s published books of poetry. It weighs over 3 pounds. Not counting end notes and index, etc., it comes in at 899 pages. It is not the kind of book one holds in a single hand, no matter how paw-like, while resting on one’s side on the bed or, as likely in my case, prone on the floor of my office.

The next day I carried it north with me to the Flathead Indian Reservation. I am teaching poetry to fourth- and fifth-graders there. At the beginning of each of four classes I held the book up for everyone to see. We passed it around so everyone could feel its heft, see the photo on the back cover of the grizzled poet, his eyes turned down, drawing on the ubiquitous cigarette. I described it as a physical representation of a life devoted to poetry and how wonderful that is. I was asked how long it will take me to read the whole thing. “A lifetime,” I answer.

I use examples from the book too. We are writing poems about place, and I open to a poem called “Portal, Arizona.” It is from “Saving Daylight” (2006). The opening line — “I’ve been apart too long / from this life we have” — sets me up, and as the poem closes: “What beauty / can I imagine beyond these vast rock walls / with caves sculpted by wind where perhaps / Geronimo slept quite innocent of television / and when his three-year-old son died | made a war these ravens still talk about,” I am rubble.

Harrison looms larger than life in my universe. I wouldn’t be here at this desk, writing these words, without the influence of his work. I picked up 2009’s “In Search of Small Gods” about the time it was published. I was already familiar with Harrison’s fiction and I wanted to try his poetry after reading that he identified as a poet over everything else. Sadly, like so many of us, until then poetry for me had been something I never gave much of a chance. I’d only seen it as an example of a high school torment in which I’d been forced to read only the most obtuse of poets writing in a language that seemed nothing akin to anything I’d ever understand. Why would I care?

Until I opened “Small Gods” and read the poem, “I Believe.” It is the first time I was ever pole-axed by a single poem. Here is my language, the language of the natural world, of smells and sounds and flavors, and the fierce struggles against the efforts of a society bent on making me conform. I devoured the book and wasn’t the same in its aftermath.

Some years later I had a similar experience all over again when I read “Braided Creek: A Conversation in Poetry” (2003), which Harrison wrote alongside former U.S. Poet Laureate Ted Kooser. In this collection we read an assemblage of short poems the two wrote to each other (without attribution as to who wrote which) and delivered via postcards through the mail. In their work I saw a solution to how I might deal with some personal efforts at the time, the direct result being a book of my own that further changed my life.

Harrison is certainly capable of writing that I’m just not smart enough to understand. Yet more than any other, the work of “the old poet” connects his experiences of the world in a way that I can relate to with mine. It is that simple. Joy and loneliness, love and frustration, beauty and sorrow. Dogs. And oh, so many birds.

I came to Harrison’s poetry during what is considered to be his “later” period. I didn’t read his earlier work until I’d already devoured the newer stuff. I am grateful for that, because I came to poetry during what I consider to be my “later” period as well. What Harrison’s poetry often does for me is provide a mentorship for growing older as a creative person, especially in a field — poetry — that like so many others is bent mostly on celebrating the new work of the young and beautiful. Especially the final collection, “Dead Man’s Float.” What a beautiful testimony from a man living with chronic pain while confronting his age and his mortality.

Harrison died at his desk, writing a poem, the Saturday morning before Easter in 2016. I heard the news Easter morning, sitting at the same desk as now, and wept. The poem appears on page 891, but it was first published in the paperback edition of “Dead Man’s Float.” I knew it was going to appear there. When that book came out I was working at a bookstore. The day it arrived was also the day more copies of my first book arrived, and there was a queue of requests for signatures on more copies than I imagined I would sell at all. Seeing the two books there, side-by-side, one a beginning and the other an end, I could contain myself no longer. I went to the back room and wept ugly tears for how much this poet has meant to me.

In closing this review, I originally intended to quote from that final poem. Instead, I will quote the epigraph:

“It’s up to poets to revive the gods. — Jim Harrison”

Chris La Tray is a Métis writer and storyteller. His first book, "One-Sentence Journal: Short Poems and Essays From the World At Large" (2018, Riverfeet Press) won the 2018 Montana Book Award and a 2019 High Plains Book Award. His next book, "Becoming Little Shell," will be published by Milkweed Editions in 2022. Chris is an enrolled member of the Little Shell Tribe of Chippewa Indians and lives near Missoula. He publishes his work on chrislatray.substack.com.

"Complete Poems" by Jim Harrison is out now on Copper Canyon Press in hardcover and special 3-volume limited editions.

Reggie Watts on growing up in Great Falls

Reggie Watts will perform at The Wilma on Friday, Dec. 17.

University of Montana professor's Christmas script produced by OWN

Tobin Addington is an adjunct assistant professor of media arts and digital filmmaking in the UM School of Visual and Media Arts, where he teaches screenwriting courses, an upper-division directing class, and more.

A portrait of Jim Harrison in oil by Andrew Sheldon.