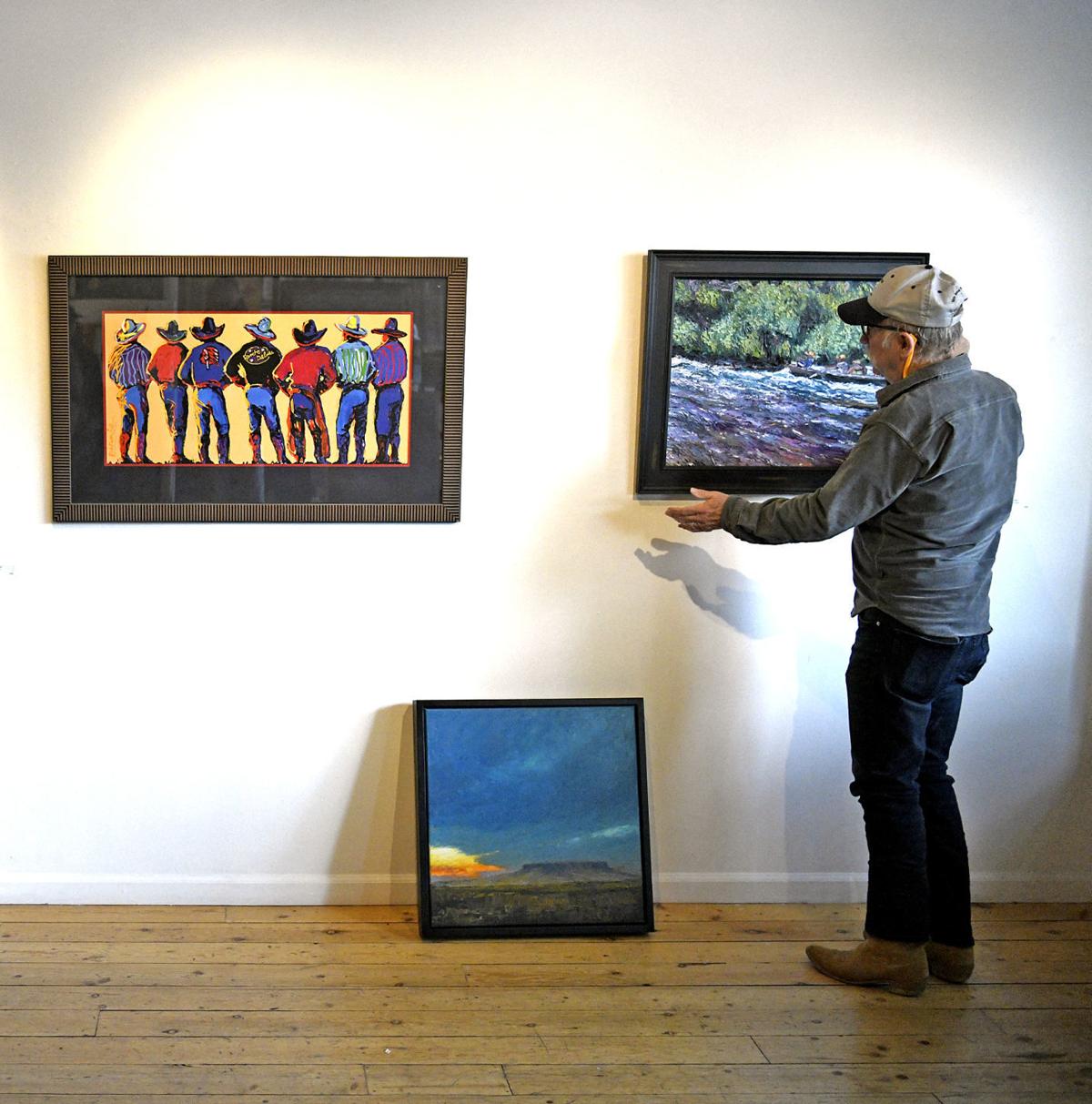 Dudley Dana hangs one of the paintings for the Dana Gallery online auction recently. 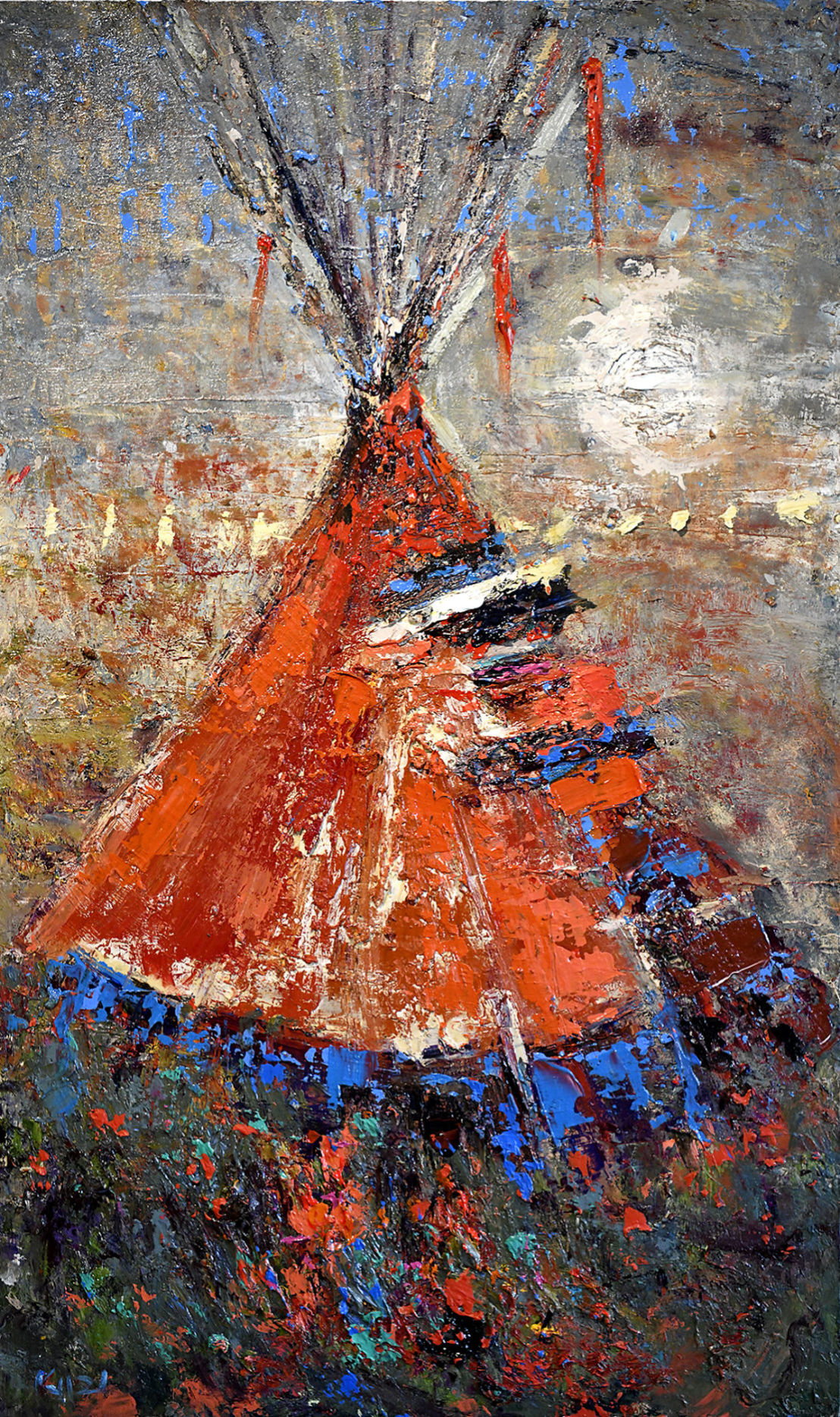 A painting by Kira Fercho is included in the Dana Gallery's online auction. 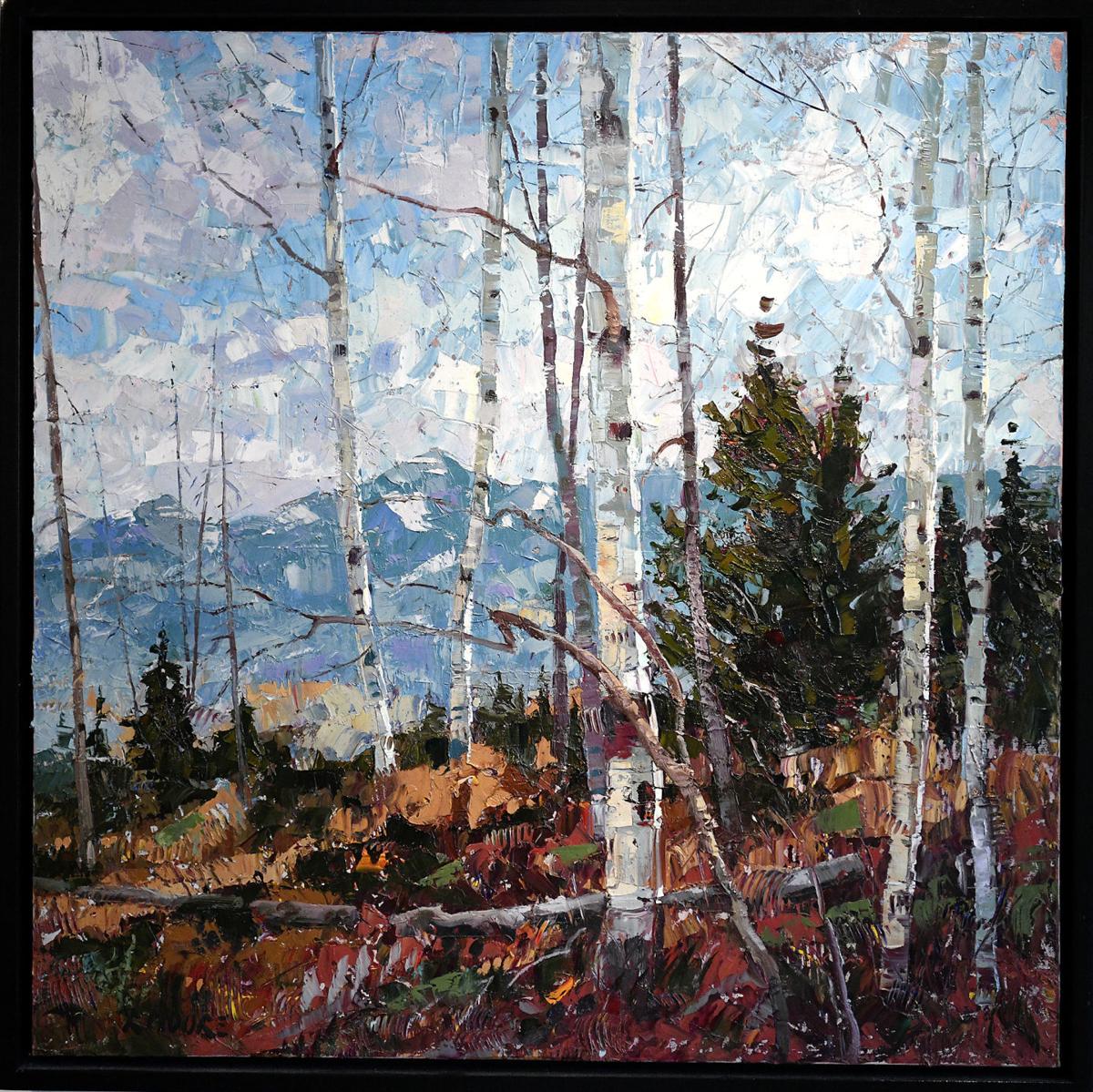 Big, heavily textured paintings in a big showroom on a busy First Friday. That’s the normal operating mode for the Dana Gallery. Since COVID has rendered that difficult, the Dana Gallery is trying an online auction.

“It’s brand new to us,” said Claire Meyer, a gallery assistant who helped arrange and direct the new venture. The gallery already has collectors who live around the United States, and they hope the online sale could reach new interest.

They’ll place about 50 pieces up for sale, with more to come, starting on Friday.

“At first I was hesitant, because I didn’t think that many artists would be interested in an auction of their works that could be as low or lower than the original price to the gallery. I was wrong because virtually every artist we contacted thought it was a great idea and was more than happy to become involved,” Dana wrote in an email.

The works range from a piece by Kevin Red Star titled, “Crow Indian Horse Tipi” to a heavily impasto’ed tepee by Kira Fercho.

Meyer said some younger artists like Clay Pape will have smaller works paired as a two-for-one. Some older works include prints by late Missoula legends such as Rudy Autio and Jay Rummel.

This summer marks the 25th anniversary for the gallery, now the oldest in Missoula. Dana, a photographer himself, initially was interested in selling that medium alone. Photographs proved a more difficult sale for collectors, and they shifted toward paintings, the genre for which they’re primarily known.

(Dana had looked at selling the gallery last year but the deal fell apart.)

Having owned the business through 2008-09 recession, Dana said, the current crisis feels different. While his artists are definitely feeling the effects, the gallery has been lobbying collectors on their behalf since mid-March. He also said he feels grateful to have a base of support from local customers.

The auction will run Friday, June 19, through an online virtual closing reception on Friday, July 10.

In addition to paintings, the gallery is offering some more unusual items. Caleb Meyer and R. David Wilson, two of their popular painters, will create a commissioned piece for the winners of two special bids. (The artist picks the dimensions, the buyer chooses the subject matter.)

Robert Moore of Idaho, one of the gallery’s best-known artists outside of Montana, is offering a packaged visit to his studio involving workshops and sightseeing and a river trip. Dana will lead a photography tour in the Mission Mountains for another group.

The COVID crisis hasn’t canceled another Dana tradition — its annual Plein Air Paint-Out, in which artists strike out across the area to paint outdoors. That will start up in early July, and the gallery might invite people out to see them at work.

The Dana Gallery's online auction starts on Friday, June 19, and ends with a virtual closing celebration and event on Friday, July 10. Go to danagallery.com for more information.

Artist hopes to inspire conservation through wildlife paintings; exhibit up at 4 Ravens

Kat Houseman's new exhibition, “Birds, Bears and Bees,” is currently on display at 4 Ravens Gallery and features a variety of springtime wildlife portraits she painted while quarantined due to COVID-19.

Missoula's standup comedy community at a loss without in-person audiences

The unique nature of the performer-audience relationship in standup comedy makes it nearly impossible to do without a live, in-person audience.

The Montana Repertory Theatre has designed an upcoming season of Montana-focused plays with creative workarounds and alternate formats.

15 Missoula albums to check out on Bandcamp this Friday

This Friday, 100% of Bandcamp's share goes to the NAACP Legal Defense Fund.

Some of the newer books arriving in Montana bookstores include:

The High Plains Book Awards announced its 2020 finalists this week, with authors from Missoula, Helena, East Helena, Bozeman and Red Lodge, am…

Dudley Dana hangs one of the paintings for the Dana Gallery online auction recently.

A painting by Kira Fercho is included in the Dana Gallery's online auction.