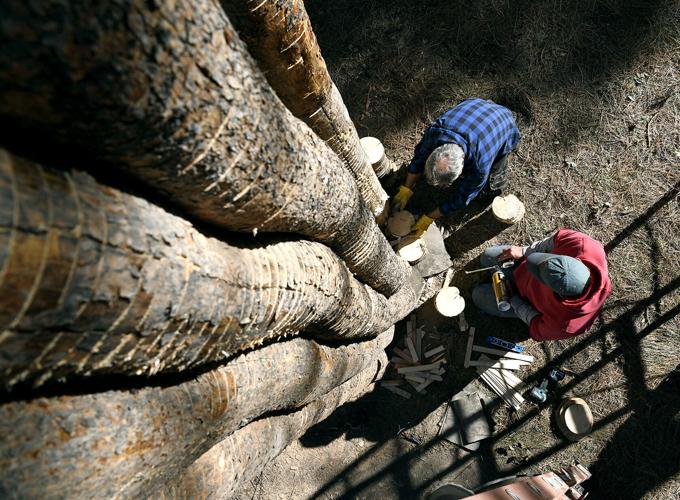 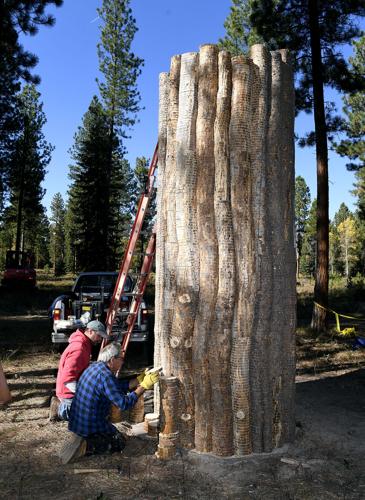 Frost and Bullis work on the last parts of Frost's sculpture, rebuilding each log slice by slice. 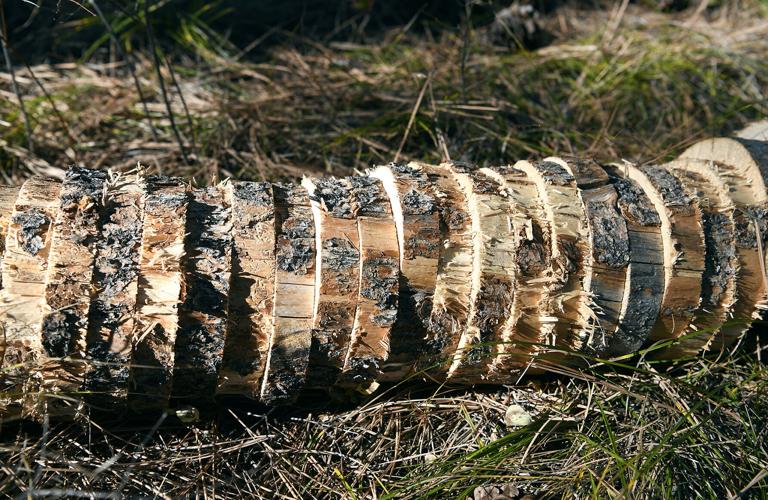 Each log for Frost's piece was cut off-site into round slices, numbered and then glued back together in order at the sculpture park.

LINCOLN — An unusual and striking group of trees seems to be swaying in one corner of Blackfoot Pathways: Sculpture in the Wild.

The artist devised the idea as a way to “make them dance,” he said. He was thinking about the way trees move in the wind, or how trees aren't typically straight, despite what we might think. They’re “always looking for light, finding cracks,” he said.

He'd read that Indigenous people would tie a tree when it was young so it grew at angle to mark a path.

Frost, who’s from the United Kingdom and lives in Norway, returned to the Lincoln sculpture park this fall to add a second piece.

His first, “A Place is a Place is a Place,” was built in 2019. A house-like structure with a gabled roof resting on a platform, it’s constructed of five rows of wood, cut into sawtooth edges to allude to the logging history of the area. It manages to represent the form of a home without walls or shingles.

The piece, too, was designed specifically to relate to the place and its surroundings.

“It’d be a little bit daft just to sort of say, ‘I’ve got this, I’ll put it there,’ ” Frost said. He wanted the site to inform the project.

His co-pilot was Marshall Bullis, a Lincoln general contractor who’s worked on many sculptures in the park. Stuart said Bullis served as an engineer for the entire project, even designing a jig to cut the pieces, plus supplying tools and transport.

“He’s just the guy you need,” he said. “Without him, it wouldn’t have been possible."

While Frost’s other piece called for a CNC router to cut all those elaborate edges, this time he wanted something more hands-on.

They harvested standing dead lodgepole, since they didn’t want to cut down live trees. They're mounted on an unseen internal wooden structure resting atop a concrete slab.

“I’ve tried to give it a new life, bring it back to life,” he said of his materials.

They sliced up the trees off-site in a workshop, and individually numbered each slab. Then they transported them to the site, and laid them out in rows on the ground. Next, they painstakingly “rebuilt” the tree, slice by slice from the ground up, gluing them in place around the perimeter of the internal core.

“Each tree is not regular, you've got to sort of allow for those in differences, and I think that's also nice,” he said. That just adds to the illusory swaying motion, which might look different with time.

Frost kept his model on site nearby, and there are expected, small differences that come with working with a material as variable as harvested trees instead of, say, custom-designed industrial materials in a studio.

People walking past on the sculpture path have been inquisitive. To Frost, the differences between working in a museum or gallery versus outside involve interaction with nature and “trying to work with it, rather than work against it, and give people another dimension when they’re outside.”

The park is dedicated to works like these, where people come seeking out artworks that are related to nature and not just foreign objects.

Since the pieces are exposed to the elements, they’ll also change with time, from the current freshly cut look to something more aged. He’s looking forward to seeing what nature does to it.

The smell of the forest was in the air last week in the otherwise sleek new MakerSpace in a corner of the Missoula Public Library.

The Missoula Symphony Orchestra’s next concert is a tribute to superheroes.

James Zimpel’s “Curb Finds and Awkward Collaborations” is on view at the University of Montana’s Gallery of Visual Arts in the Social Sciences Building through Thursday, Nov. 3.

The funds are “intended to boost Montana’s creative economy as it continues to recover from the impacts of the COVID-19 epidemic."

The Last Glacier: Making art in a changing landscape

Artists document the splendor and the decline of glaciers

A collective of three artists recently displayed work from an ongoing project called “The Last Glacier,” at the Paris Gibson Square Museum of Art in Great Falls.

Bently Spang’s new artwork feels less like a single piece than a gathering — 30 tipi tripods fan out in a large V-formation.

Things to do: Jazz, condensed Shakespeare and 'Call of the Wild'

Frost and Bullis work on the last parts of Frost's sculpture, rebuilding each log slice by slice.

Each log for Frost's piece was cut off-site into round slices, numbered and then glued back together in order at the sculpture park.