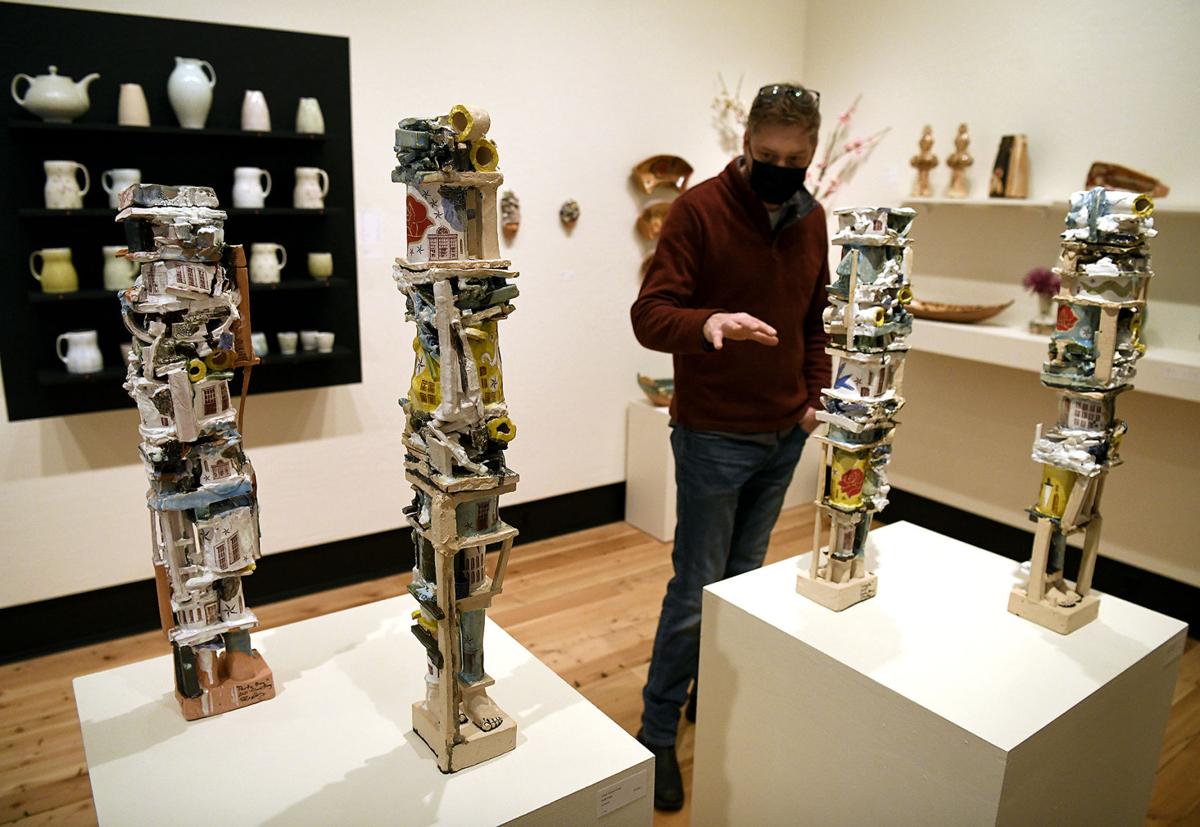 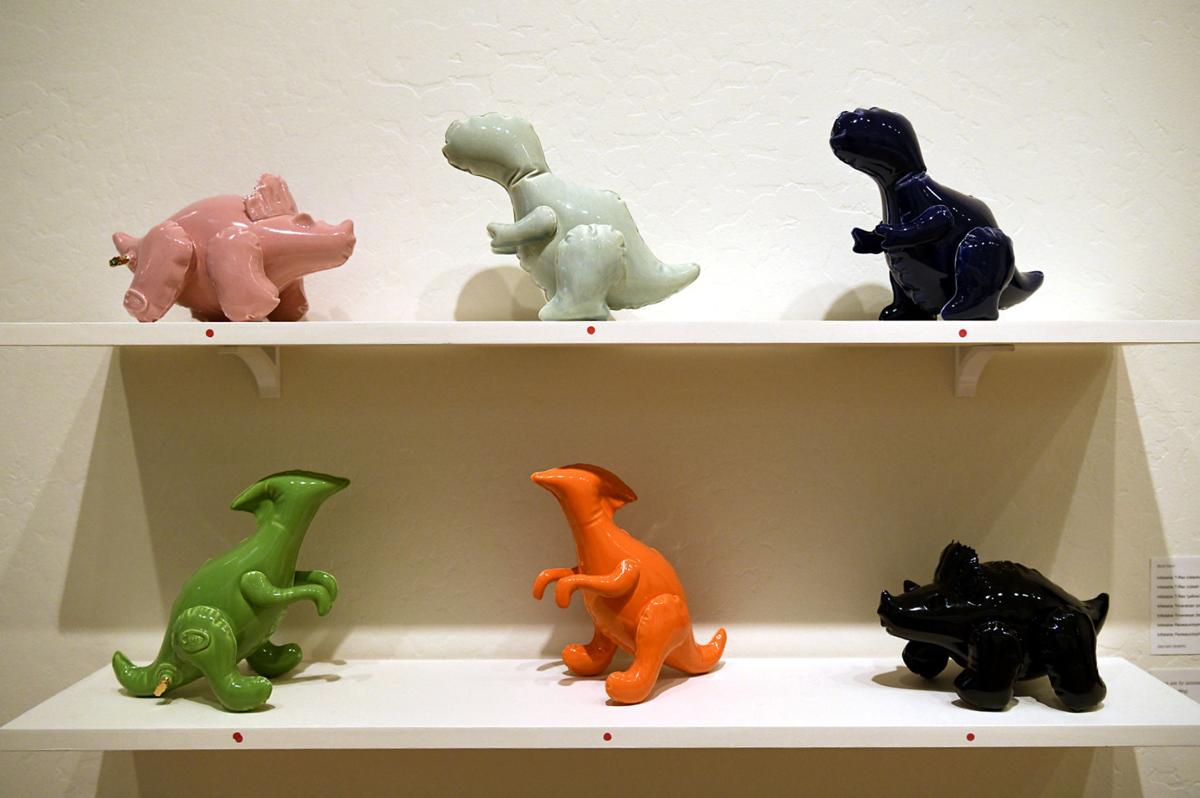 Brett Dern’s T-Rexes, triceratops, stegosauruses and parasaurolophus are cast in clay from a vinyl mold. 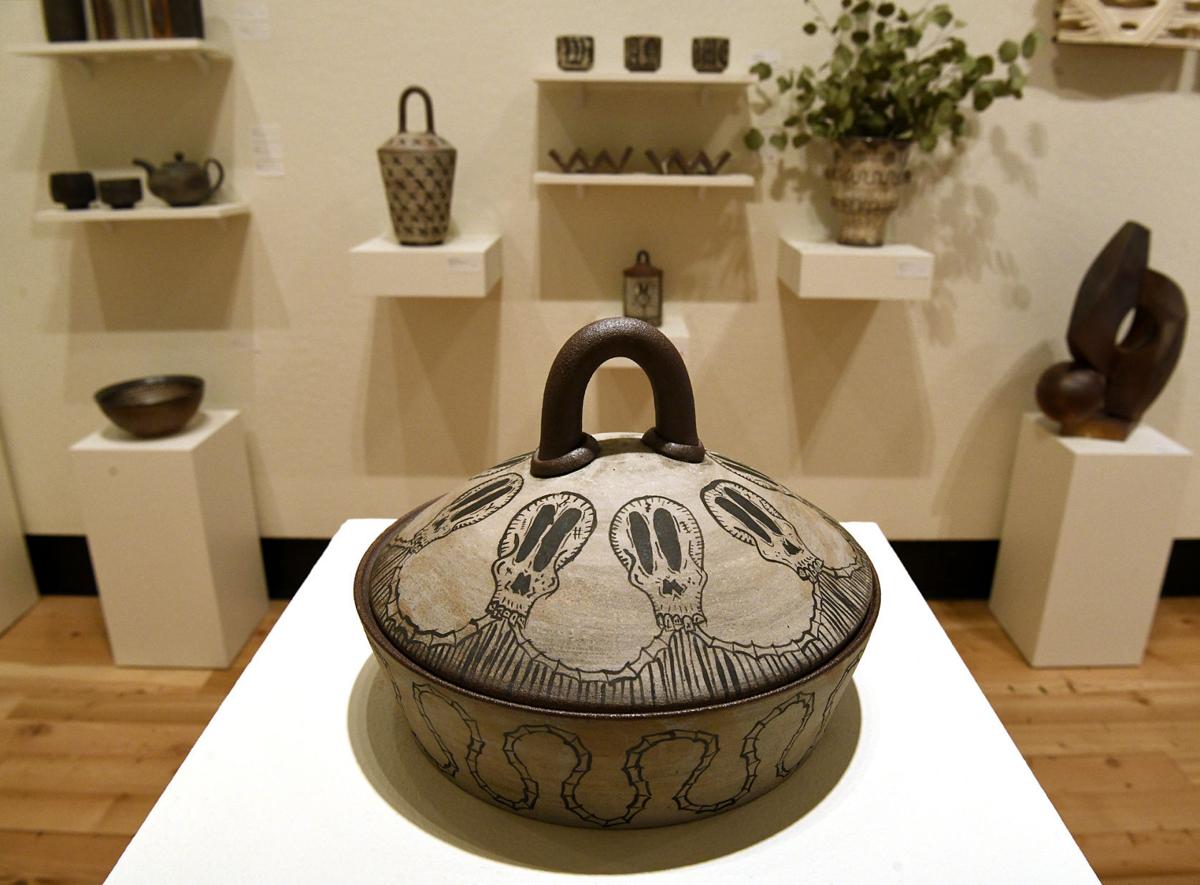 The dinosaurs are not extinct, but they are no longer for sale.

Brett Dern’s T-Rexes, triceratops, stegosauruses and parasaurolophus, in candy colors, attract collectors. They’re shaped like balloon animals, and while he initially molded one from a balloon animal, he now makes his own custom works out of vinyl and then casts them into clay. (While they look solid, they’re quite light and hollow.)

The Pittsburgh artist has “made quite a name for himself with these playful dinosaurs," said Jason Neal, co-owner of the Radius Gallery, with their pop-art sensibility and detailed flair (down to little gold air nozzles).

They sold quickly, along with many of the other nearly 200 pieces of eye candy in the gallery’s sixth annual Ceramics Invitational.

The eclectic show usually includes 10 to 12 artists, and they’ve only repeated them once or twice, Neal said. They’re always looking for a “good cross-section of work that represents what’s exciting about the world of ceramics today.”

That includes artists from Missoula, around Montana, and farther locations. Ten of the 11 have strong connections to Montana — whether they live here or have been selected for residencies — and six are former or upcoming residents for the Archie Bray Foundation for the Ceramic Arts in Helena, said co-owner Lisa Simon.

As a whole, the show includes early career artists and established ones, potters and sculptors alike, and some new wrinkles.

Iva Haas of Helena brought some different kinds of functional pieces to the show for the first time — electric lamps and jewelry, such as earrings and necklaces. Her brightly colored lamps employ clay along with accents such as flocking and toy balls. Neal said many sculptors are branching out in their materials — blending mediums and “not very committed to any one of them, in ways that make this kind of stuff possible.”

David Regan, a Missoula sculptor who’s exhibited nationally, contributed “The Grid,” in which two hands are gripped, perhaps arm-wrestling “in competition, camaraderie or both,” according to his artist statement. The arms, from bicep to the fingers, are intricately decorated with imagery of cityscapes, countrysides and dense neighborhoods, trains and transmission lines, barbed wire fences, flocks of birds and cattle nudged up against parking meters.

Neal said he uses a sgraffito technique, in which he takes white porcelain, coats it in black slip, and scratches it with a pin to remove the black to create the imagery.

Andrew Rivera, a recent Clay Studio of Missoula resident, is now based in Minnesota. His work references pre-Colombian imagery and Mexican printmakers, according to his artist statement. Drawing on his heritage, his functional forms include tortilla warmers and taco trays — zigzag holders to perch them upright. Some of these recent pieces include lettering, such as a “Blackletter Typeface X” jar, with a repeated calligraphic X motif, or a plate that says “Speak for Yourself,” which could be either a self-care reminder or an admonishment.

Courtney Murphy of Missoula shared newer forms, such as orb-shaped vases in stark black with constellations of dots in orange or red; and oval trays with black and yellow ochre.

“When I saw an inkling of that about a year ago, I thought I would love to include some of those pieces,” he said.

Some of these Montana artists might be familiar, while the out-of-state creators are likely new to people in Missoula. Chris Kelsey, a Billings native now based in Spokane, contributed pieces to this show, along with a recent installation in the AC Hotel. They resemble abstract paintings pushed out into three dimensions, with two layers of organic shapes accented by negative space and shadows. In his artist statement, he cites “geometric forms and the suggestion of geologic forces to portray constant change in our world, society and relationships.”

Melanie Sherman, a German now based in Kansas City, surfaces her cups and goblets with intricate patterns that mix decals with hand work that show her love of baroque, Renaissance and rococo design.

Clara Grace Hoag of Houston, a resident at the Bray (with some complications due to COVID), constructs collage-like sculptural towers. From a base of human feet and legs, scaffolding and structural forms in a pleasing array of styles rise up, with decorative graffiti (skulls, doves) and decals of windows. With the architectural references, it feels right at home amid all the construction in downtown, as she writes in her statement: “The visual language in my work demonstrates this unique struggle and strength in being human: the landscape looks fragile, but it holds.”

(Don't forget to look for the pitcher by Pablo Picasso.)

A Missoula teacher bares his politics in his portraits

Brett Dern’s T-Rexes, triceratops, stegosauruses and parasaurolophus are cast in clay from a vinyl mold.