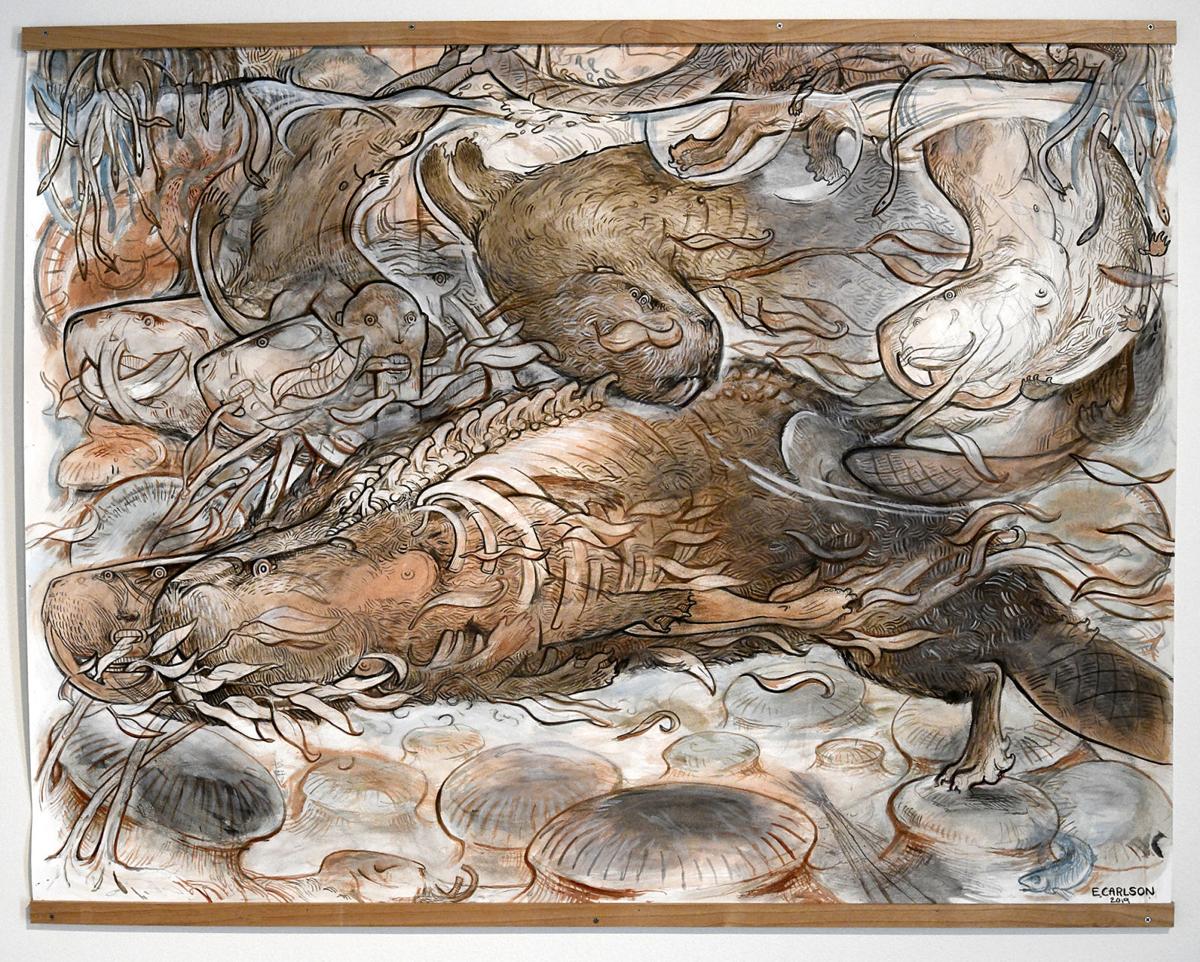 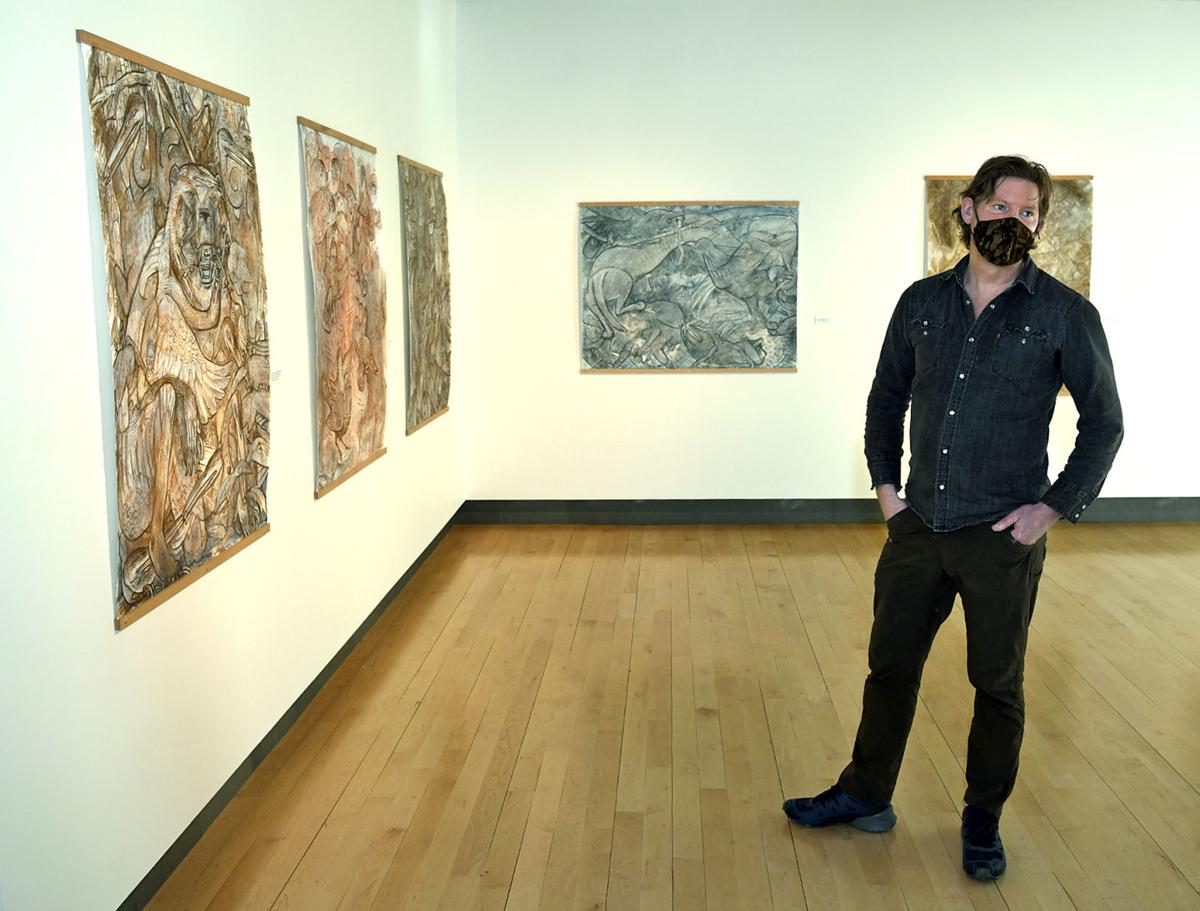 Eric S. Carlson brings memories of his fieldwork as an archaeologist and illustrator to the paintings in his exhibition "Entanglements" at the Missoula Art Museum. 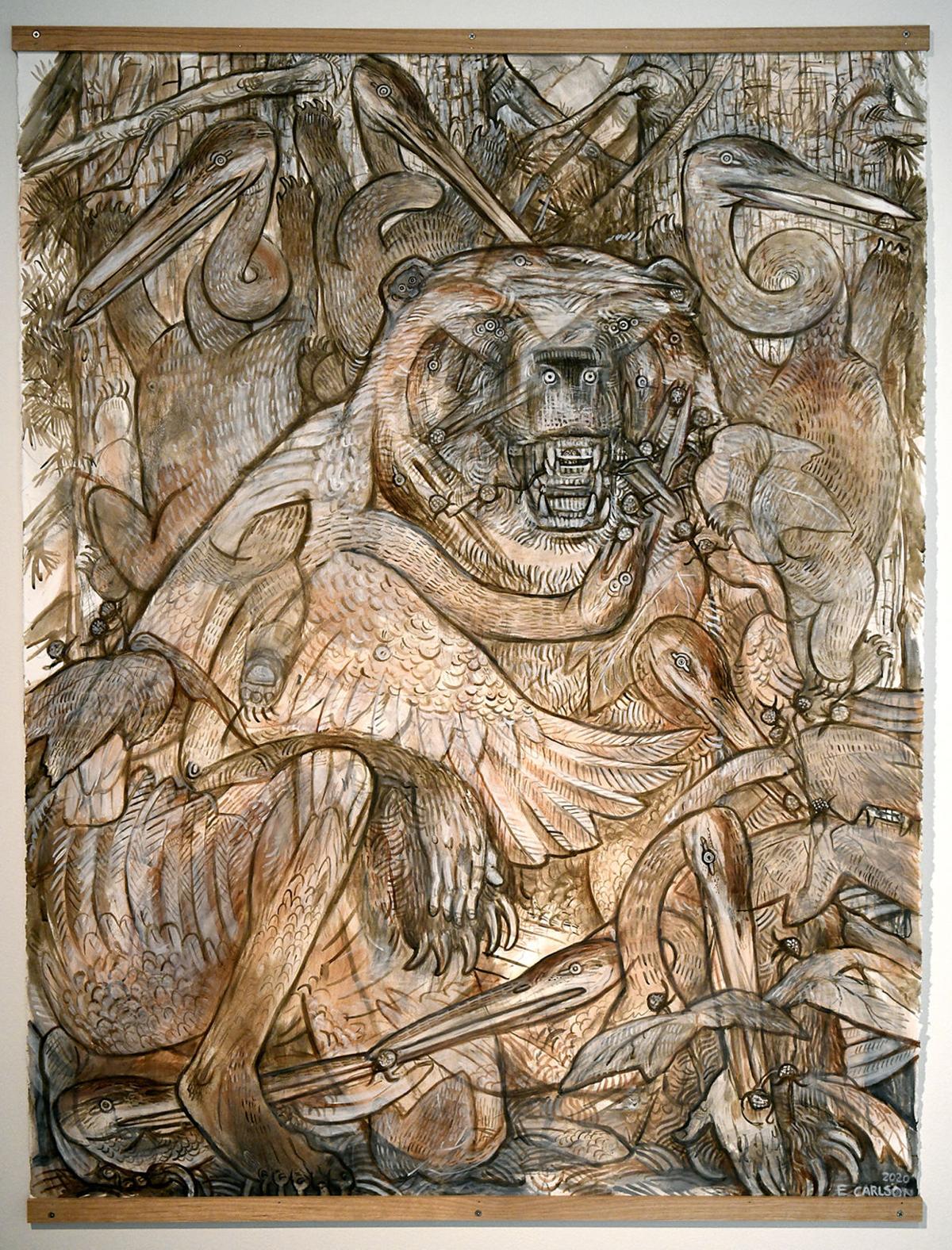 A crow barking at an owl on the Westside. A chickadee landing on a blade of grass. A run-in with a sow in the backcountry of Glacier National Park. Mongoose feeding on a boar carcass in a stream in Hawaii.

Eric S. Carlson takes his memories of scenes like these, some of which he came upon during his fieldwork as an archaeologist and archaeologist illustrator, and transforms them into kinetic paintings, where the animals are visible from multiple vantages or points in time.

In one way, he’s “creating mythology out of these simple events — simple interactions of animals and birds in their environment,” he said.

The paintings for “Entanglements,” his first exhibition at the Missoula Art Museum, were all made in the past 14 months, based on experiences in Montana, Alaska and Hawaii.

Carlson’s images feel surprising because his specificity and familiarity with the natural world, and his way of thinking as an archaeologist, is filtered through a contemporary composition style.

In Carlson’s artist statement, he says “archaeology demands that one see the past, the present and the future simultaneously,” considering context, culture and events that occurred at a particular place. Brandon Reintjes, the MAM’s senior curator, said there’s many great illustrators and storytellers, but they haven’t quite seen anyone creating visual narratives quite this way before.

Carlson said he was initially drawn to the field “because of its integration of art and science,” and he studied archaeological illustration in college. Afterward, he worked on surveys and excavations around the West and farther afield.

It’s taken him on seasonal backcountry trips, and he spends the offseason in Missoula working on his art. He illustrated a book, “Six Hundred Generations: An Archaeological History of Montana” by archaeologist Carl M. Davis, which examines the state’s Indigenous history. It won the High Plains Book Award in 2020, and was named “Best Popular Book” by the Society for American Archaeology.

His work has been shown locally, including the Brink in 2015 and Montgomery Distillery in 2019. That last show, “Wilderness,” boasted concepts that he’s developed further in “Entanglements.”

While his previous work involved humans or touched on mythology, these paintings mostly leave people behind to look toward animals and birds, at least within the boundaries of the frame.

It shouldn’t conjure up any images of a plein air painter, though. He doesn’t set up on site, or work from photographs. They were all fast-moving incidents.

“I’ll be outside and witnessing an event, or be in or become engaged with an event, where I’ll see a creature doing something unique, or different. Or I’ll see a convergence of multiple creatures kind of come together in one space and interact,” he said.

He’ll have a feeling on site that it might be meaningful.

“I’ll make a point of trying to remember it, and then kind of see the world that the event takes place in as I’m there. And then I’ll race back home and start sketching.”

He’ll consider the experience from multiple perspectives, sketching and sketching, until it “comes alive” and he begins to work on them as a larger painting. Some of these new pieces are quite large — 50 by 38 inches, for instance. In a break with his past work, he used watered-down acrylic spread with his fingers — pushing and rubbing the color into the paper, with additional marks in graphite and with one small brush. The palette is restricted to blues, browns, tans, oranges and reds.

“Nature art” might make one think of calm outdoor scenes, but Carlson’s interpretations remind us that nature isn’t static. A scene of a chickadee making a landing is rendered with at least four birds, not one. This sort of churning, overlapping style of composition is derived from his thoughts about memory, too. When we recall an incident, he said, we don’t see photographic snapshots frozen in time. To him, it’s a flurry of activity, movements and behaviors that become interwoven with our past experiences and events happening around us. So the actions in his paintings flow around, sometimes like photo composites or cubist pieces.

“Everything is alive and doing, and constantly changing,” he said. “Everything’s in a constant state of becoming, interpenetrating the permeable boundaries of other features,” he said.

The use of his fingers relates to one of his ideas — that they’re not unlike cave paintings, drawn from memory by ancient hunter-gatherers who were deeply familiar with the animals they were portraying, no photo references required.

“It’s a different way of producing something that’s lost in this world of technology,” he said.

A few examples show how his process works. Take “Beaver Omen,” drawn from an experience on the Middle Fork Flathead River near West Glacier last year. He saw one of the creatures swimming against the current just a few inches above the bottom.

Instead of rocks, he drew stromatolites — the earliest known form of life on Earth whose fossils are found in Glacier National Park, often on mountain peaks. Different versions of the beaver are seen throughout the image — diving and swooping through different eras of time, from the deep past to the one he saw, to one in the future, in the form of a small beaver skull. They’re above the water line and below, living in two different worlds. One of them consumes willows for sustenance.

“The composition itself is alive,” he said. “I spend a lot of time placing creatures in certain areas … as a viewer your eyes and your attention get circulated and moved around.”

"Bear and Cubs Comprised Of Sandhill Cranes (... Eating Thimbleberries)" is based on a run-in on a tributary of the North Fork Flathead River last year.

In the painting, a flock of cranes swirl around the central figure of the bear, with overlapping sets of eyes. Soon you notice the bear’s head is woven from crane heads.

He was with a small group doing an archaeological survey on the river near the park’s boundary with Canada. They’d seen a flock of cranes, that would “flare up and fly off,” as they approached. On the trail back into the woods to camp, nearing dark, and they spotted a sow with cubs in the berry patch.

“The cubs scurried up the trees, and the mother bear just stared at us,” he said. There was a “twitching in her eyes,” and they didn’t know what might happen next — an attack or a retreat.

Thankfully, she bolted. That agitation in her eyes, though, came out in those multiple sets of circular eyes.

Reintjes said it’s not uncommon that artists working from memory can start from a specific type of tree, plant or animal and end up with a generic one. He thinks Carlson’s familiarity with the natural world “helps really ground you in that environment,” from the thimbleberries to the trunks and branches of the fir trees.

“Wild boar and mongoose,” from Hilo, Hawaii, is based off a work trip to the Big Island. A wild boar had died and washed down a stream, where it got stuck against rocks beneath a bridge that he walked across every day, and he would take note as it decomposed in a peaceful location. In his image, it’s lying on its side in the water, as plants bloom around it, decorated by a filigree of mongoose.

They were consuming it — one eventually held court over it all for weeks, working its way back and forth from the head to the rib cage, where it would sharpen its teeth.

The image, like the scene as he witnessed it, is serene and not grisly — it's a transfer of energy, no different than that chickadee diving down for seeds.

Eric Carlson’s exhibition, “Entanglements,” is on view at the Missoula Art Museum through May 22.

Picasso pitcher: Gallery shows off a ceramic by the master

When going about daily life in Montana, no one expects a Picasso in the corner, but there it is.

Eric S. Carlson brings memories of his fieldwork as an archaeologist and illustrator to the paintings in his exhibition "Entanglements" at the Missoula Art Museum.