In pop music, there's a tradition of covering previous songs by influential artists. Many of the best covers, or at least the most memorable ones, take the raw material and re-invent it while keeping parts of the original. In jazz, too, covering standards is part of the tradition, and likewise dismantling them and making a personal statement is common.

In visual arts, it's less often that established artists directly interpret or respond to a previous artist. That was the challenge in "In Praise of Folly: Five Artists After Philip Guston," a new exhibition at the Missoula Art Museum.

Through a grant, a national foundation called Art Bridges loaned the museum a painting by the influential American abstract artist, and they in turn asked five artists to create works in response.

Senior curator Brandon Reintjes said that it's an unusual challenge to put to an artist, and given the painting MAM chose, it was likely more difficult.

Guston, who died in 1980 when he was 67 years old, is famous for several things: his celebrated non-representational abstract expressionist paintings, a style then considered the peak of American art. He's almost as famous for his decision to change course and develop brash figurative paintings with a deliberately cartoon-like style.

Where abstraction was then discussed in transcendental terms, some of Guston's new recurring subjects are more mundane: large, bean-shaped heads with oversize Cyclops eyeballs. They smoke cigarettes and stare at the ceiling. Sometimes they're sleeping in bed, and sometimes they're awake in bed, smoking. He would paint piles of objects, such as shoes or disembodied legs (whose feet wore shoes). They're hard to unpack, and his still-careful paint handling no doubt made it more difficult for his admirers to take when he changed his work. The New York Times headline when he died was, "Cartoonish imagery stirred some ire."

The painting, "Cigar," from 1969, is oblique while containing features that scream with relevance. Given the large size of the Art Bridges collection, there's no doubt that the MAM could've picked something less confrontational — it's not hard to imagine how a purely abstract painting, for instance, could be the jumping-off point for a show with less teeth.

"Cigar" includes one of his other favorite subjects, a hooded figure, in this case in his favorite color, pink. It dominates the foreground, with coin-slot eye-holes, and an oversized hand with a smoking cigar wedged between its fingers. The only background, aside from a plain white background, is a partially constructed brick wall.

In "Philip Guston Talking," he explained how he first painted Ku Klux Klan members when he was a teenager in Los Angeles. Guston's parents were Jews who fled Ukraine for Montreal and then California. He was involved in a strike at a factory that the Klan helped break. When he revisited the image in the 1960s, he became entranced by the notion of evil as a whole and the hooded figure became a form of self-portrait.

The MAM reached out to five artists who had an affinity for Guston and social and political underpinnings in their art, he said. Most live in Montana or have ties to the state, but are known around the country. He said all five found "a point of entry" into Guston, whether through the political themes or the use of enigmatic, personal symbols.

Richard Guston once said, "Everything means something. Anything in life or in art, any mark you make has meaning and the only question is, 'What kind of meaning?'"

That's the sort of question the artists had to answer. There's more than a few cigars and splashes of pink, but they all can stand alone, with different thoughts and concerns, like a cover that doesn't necessarily require familiarity with the original to appreciate.

Jaune Quick-to-See Smith's "Trade Canoe: The Surrounded" is part of an ongoing series of trade canoes: mixed-media on custom-shaped canvases where the boat carries messages and references.

At 14 feet wide, this piece is loaded with images that recall both Guston and Smith's background as a member of the Confederated Salish and Kootenai Tribes.

In her statement, she outlines many of them: An oversized head "reminiscent of Custer" that echoes Guston's preference for large heads (She painted hers in the style of an Olmec, not an Italian). Guston modeled his "piles of detritus" on those of de Chirico's, she writes, and so she studied them and made her own: "a maggot, hands, a magpie, Plateau pictographs, shoes, bison and human skulls with small pox and Guston's arrows."

On board are seven heads each of men and women that represent the "seven generations" spoken of regarding the future of Indian people. His love of cartoons gets a nod with a Krazy Kat reference: a brick thrown at her Custer substitute.

Adrian Arleo, a ceramic sculptor who lives in Lolo, responded to the enigmatic quality of Guston's work. (The word "baffle" comes up frequently when discussing him.) Like Smith, she did research, and most any element of the sculpture you can pick out is deliberate. For instance, she learned that one of his favorite quotations is "What shall I love if not the enigma?" from Giorgia de Chirico, according to her artist statement.

Arleo, who plays with myths in her work, sculpted a bust of the artist, set atop a lion's body like a chimera, resting on a row of bricks, its head upright and alert, with a cigar in its paw.

It's called "Philip Guston: Portrait of the Artist as a Sphinx." She wrote that Guston's hooded figures as a type of self-portrait inspired the move — she's the only artist who included an image of Guston himself. Despite his preference for low-brow crudity and humor, she sculpted it in a meticulous, realist manner.

Jay Schmidt, who taught at Montana State University for more than 25 years before retirement, seems in some ways the most natural choice. His loud paintings and painted chain-saw sculptures depict odious figures clad in a nightmarish pop-culture signifiers, like something you'd hallucinate after spending an insomniac night scrolling through political Twitter.

In his artist statement, Schmidt says that Guston has been a "looming force" in his life since he saw a retrospective 37 years ago in New York. He admires the later Guston paintings the most because "they carried a parade of absurd and at times idiotic characters transformed into sublime narratives. There is a raw desperation that hits the viewer deep in the soul."

His Guston piece, "Money Dogs," stretches 12 feet wide, and, in part, almost 9 feet tall, extra panels added to give some figures more room. Like Guston, he knows how to paint pretty but he's painting ugly, in this case a skeleton in a Jiffy Lube war helmet, a Neanderthal in a "Make Believe in America" cap staring into a smartphone; a silver-skinned Trump in a Burger King helmet waving a fried-chicken leg and smoking a pipe made from a bin Laden head, all sitting on a giant black balloon dog with dollar signs for eyes.

John Buck, a printmaker and sculptor who lives in Bozeman, packs symbols into his work, whether to historical or contemporary figures and issues. His sculptures, carved from wood, are "kinetic," with moving parts powered by motors. "Between Two Fires," shows a concern of Buck's, homelessness. A figure, with one eye, just like a Guston, sleeping on the ground. Clown shoes poke out the end of his blanket, just like in Guston's pictures. In a nod to "Cigar," a wood-carved word bubble exits from his mouth to symbolize an exhalation. He has two fires on each side of him, which Buck said is a trick to stay warm when living outside. You can press a button on the ground and the flames of the fire and the bubble start rotating.

Notkin, a ceramic sculptor, lives in Washington after a residency at the Archie Bray Foundation in Helena. The things he's addressed in past work include the Iraq War and Abu Ghraib. Even a functional piece like a teapot might be topped with a mushroom cloud.

Reintjes said Notkin's piece, "Philip Guston's 'Cigar' Gets a Notkin Redo," is a mash-up of previous styles of work Notkin has made, all in the context of "Cigar." A finely sculpted skull in the shape of a pyramid, one of Notkin's previous recurring pieces, is topped with a lamp. Notkin wrote that the ancient structure's shape resembled the hooded figure Guston painted, and he thinks of the bulb as cartoon-like indication that he's got an idea brewing. The partial brick wall coincidentally resembles sculptures he's made of war-torn rubble. He writes that like Guston, he hated Richard Nixon, and pays tribute to Guston’s caricatures of the former president’s long nose by placing a ceramic cannon on two walnut shells.

Like every piece in the show, there's even more references and layers to unpack given enough time, just like you can spend hours studying the ways different musicians have reinterpreted and remixed prior artist's work, processing it and disfiguring it until it's something new and different.

The MAM will have an Art Swing gathering for the show on Friday, March 15, from 5-8 p.m.

Three artists will be in attendance, Adrian Arleo, Richard Notkin and Jay Schmidt, and there will be music by Naomi Siegel's trio, hors d'oeuvres and a no-host bar.

Admission is $10 for adults, $5 for students and free for members. RSVP is requested.

Instead of a printed catalog, Art Bridges provided funding for a special site for the exhibition, folly.missoulaartmuseum.org. It includes interactive photos, artist interviews and more.

UM creating writing professor Prageeta Sharma will give a talk, "The New York School of Painters and Poets," as part of the MAM's Voices in Contemporary Art lecture series. It runs from 7-8 p.m. on Wednesday, March 20, at the MAM.

University of Montana associate VP for enrollment is out 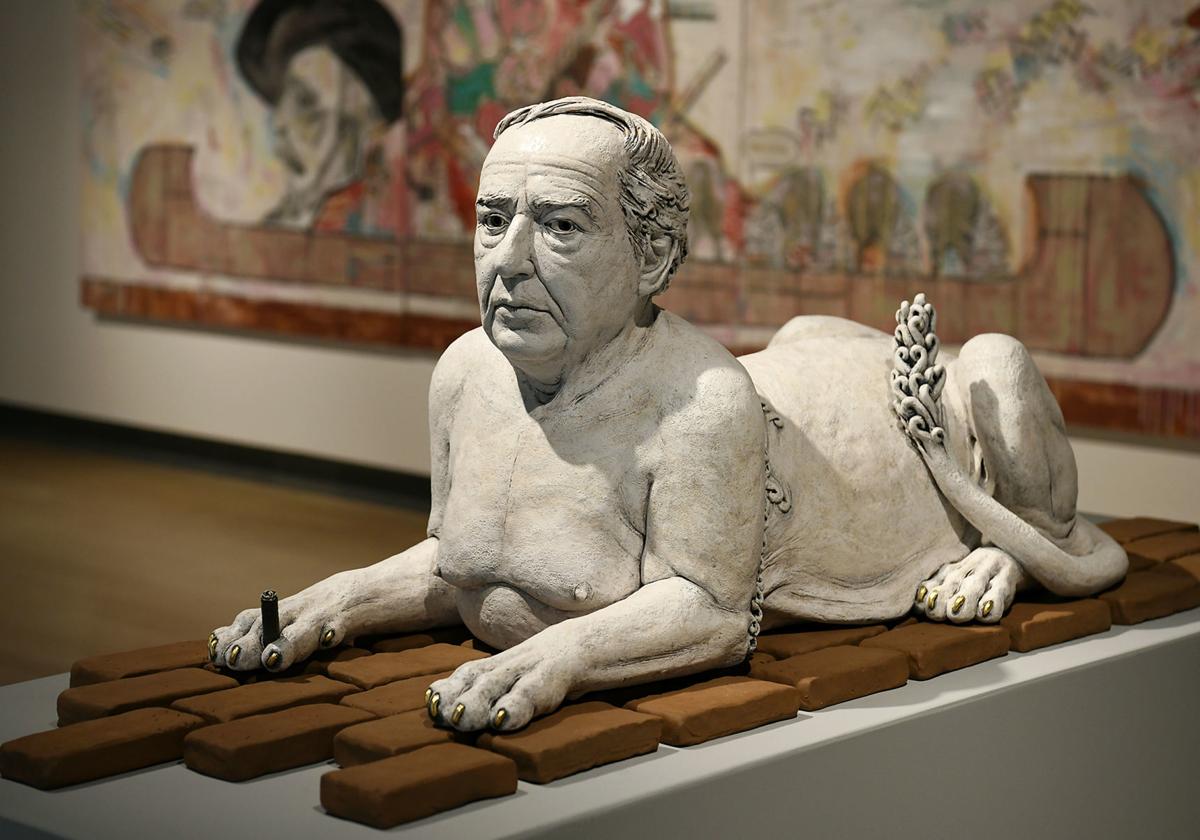 Adrian Arleo, "Portrait of the Artist as a Sphinx," 2019 (clay, glaze, wax encaustic) 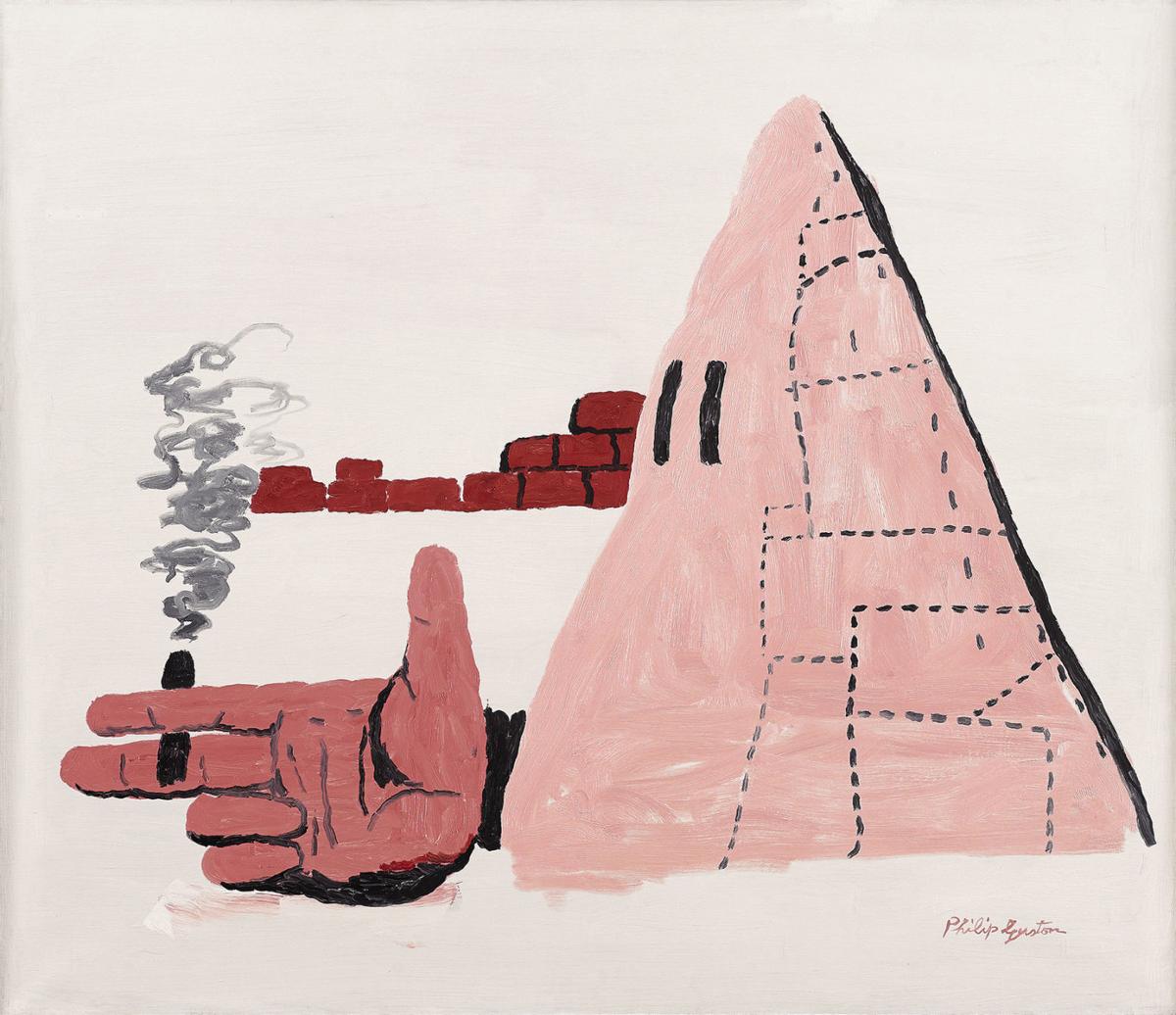 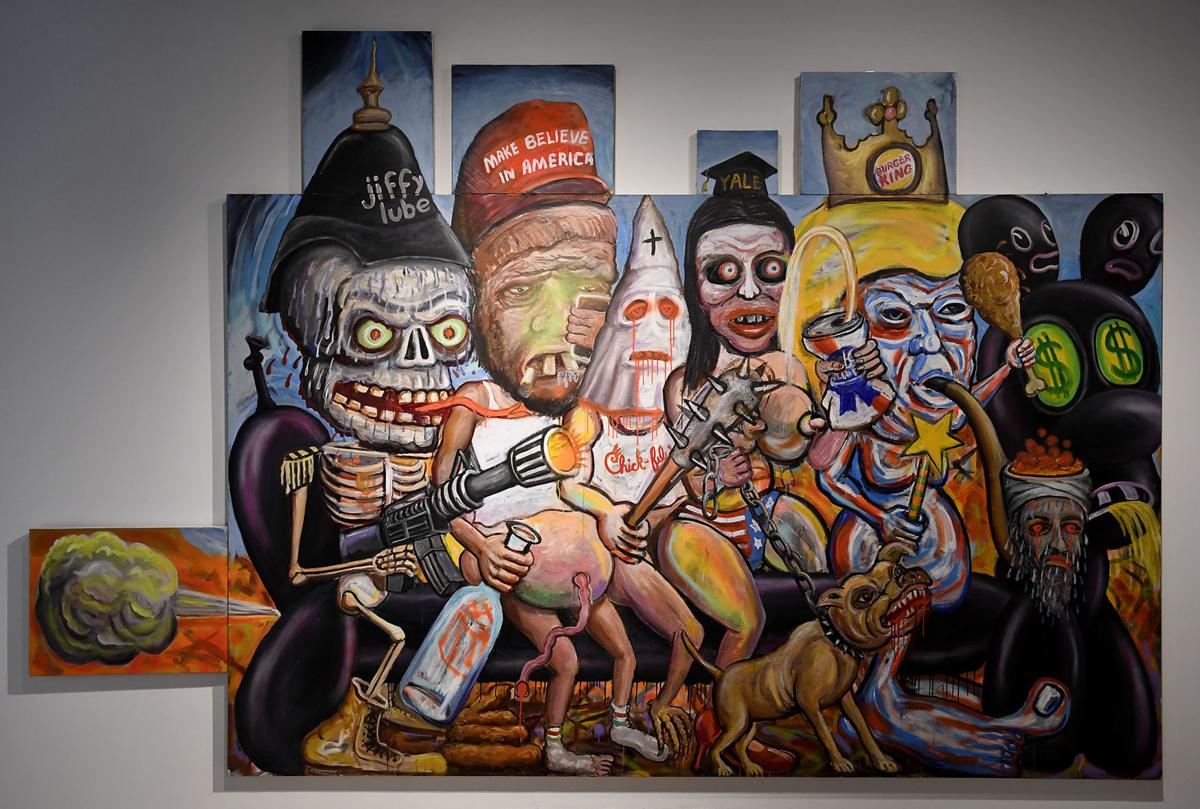 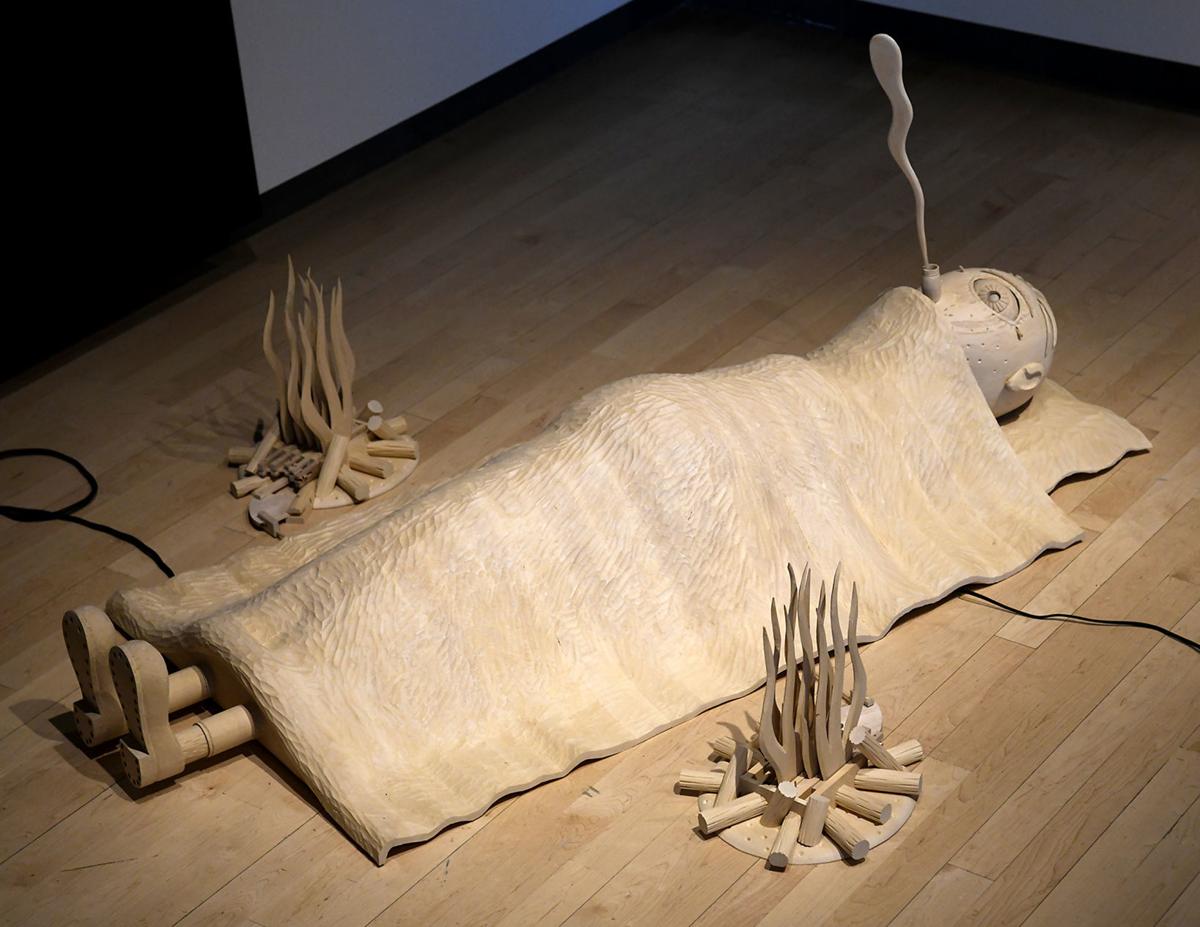