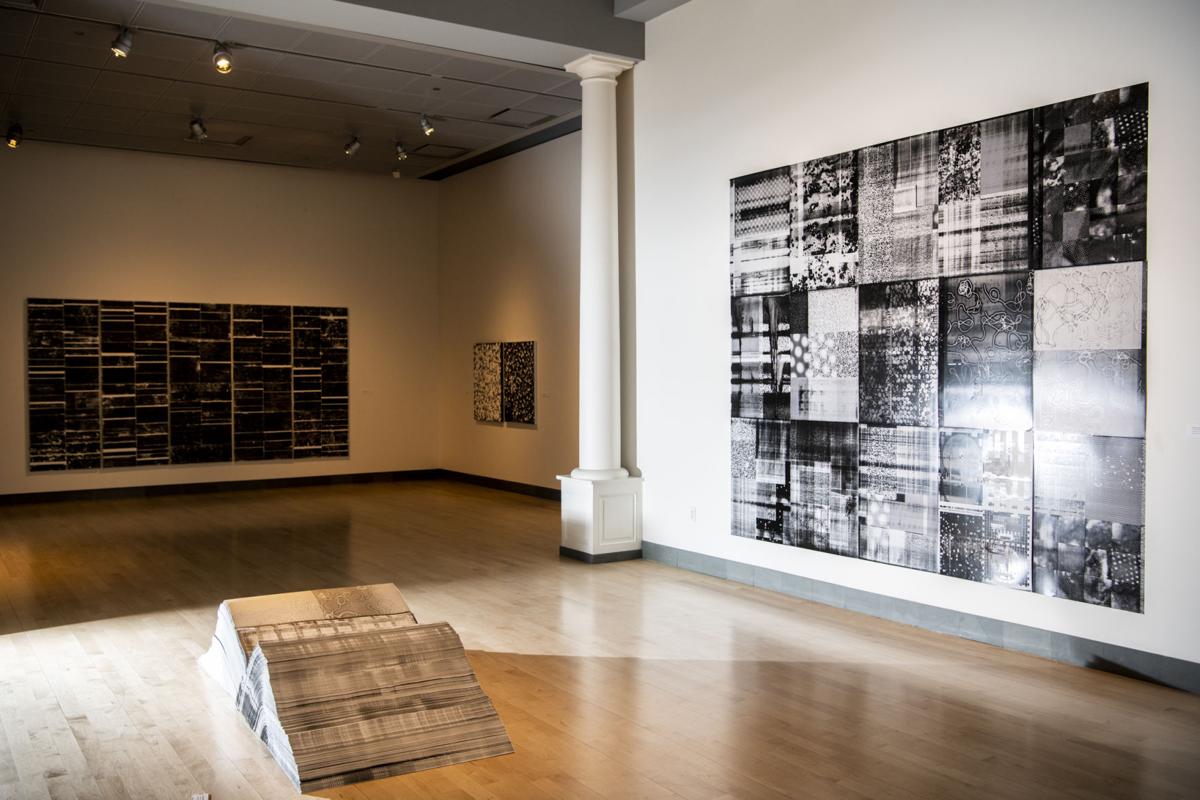 Jon Lodge's exhibition "Fracture" is on display at the Missoula Art Museum. Lodge, a Billings resident, studied jazz and composition and then ran a commercial printing shop before heading straight into visual art. 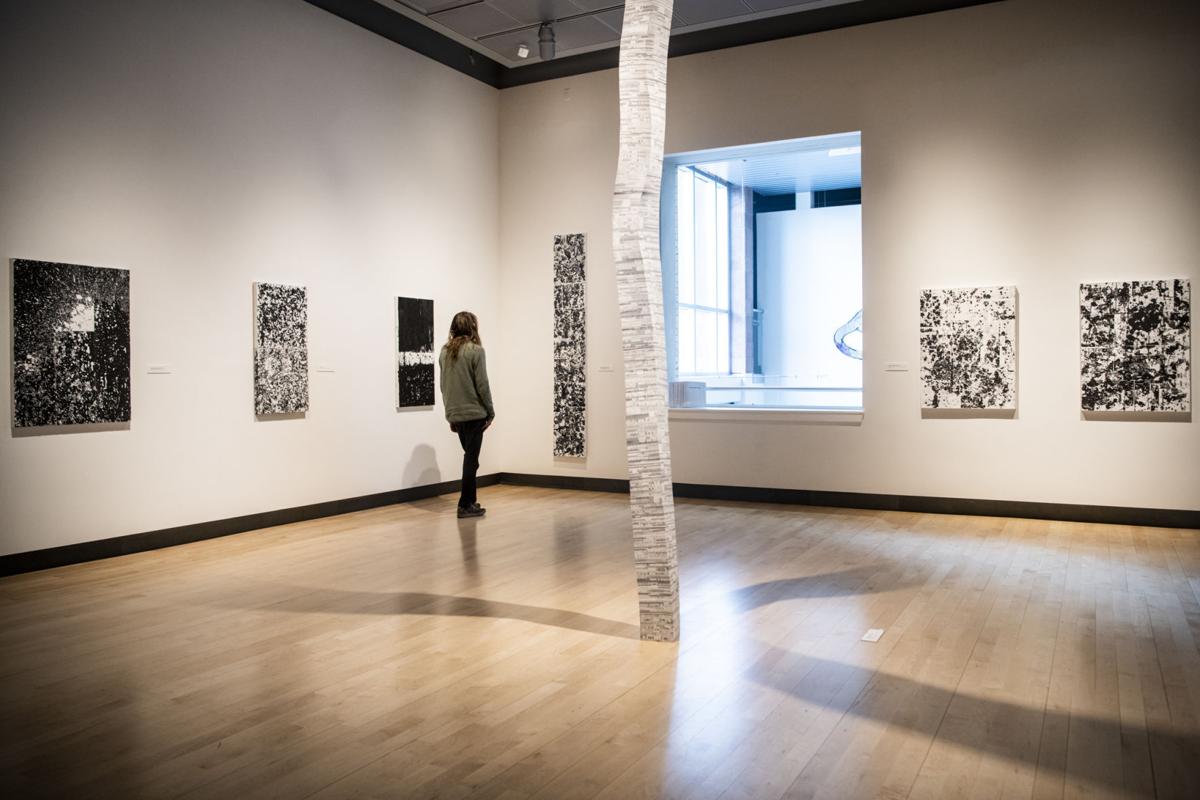 "Fracture," Lodge's first exhibition, comprises black-and-white pieces. The title originates from "processes and procedures, based on how the work looks," he said. 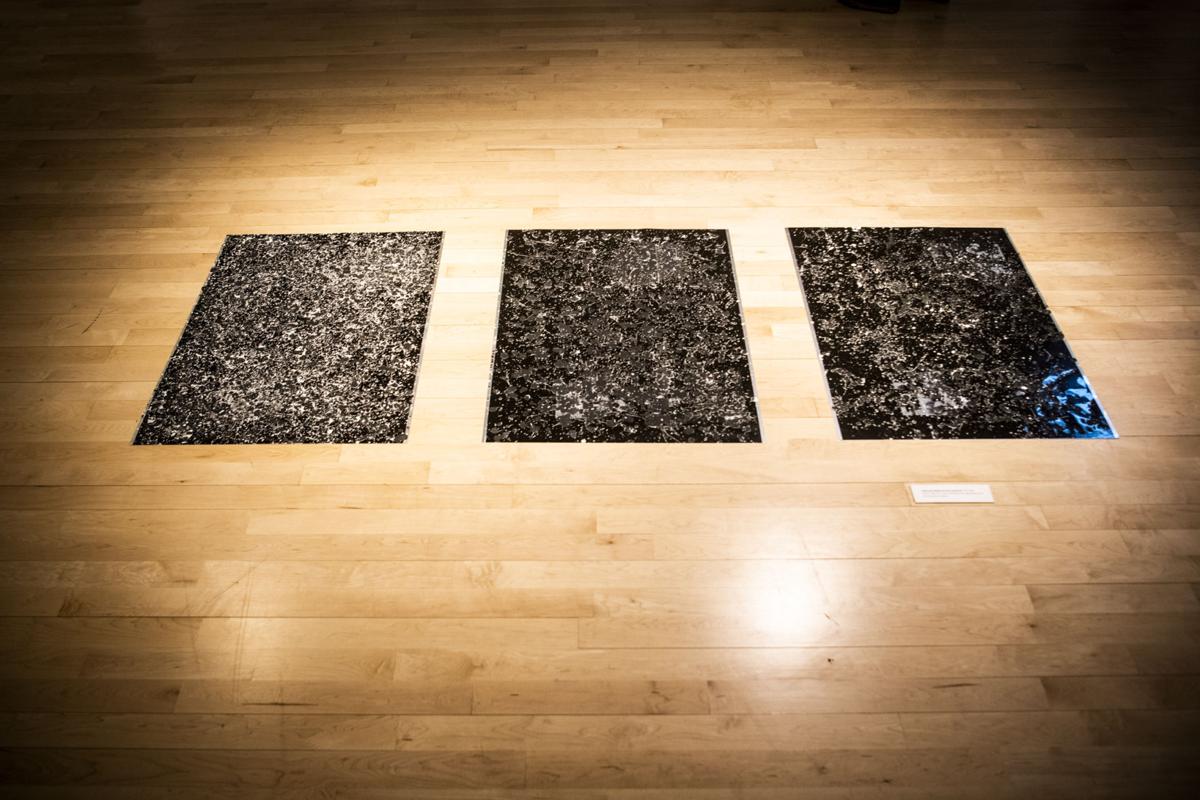 The entirety of the collection was made between 2020 and now except for one piece dating back to 2018. 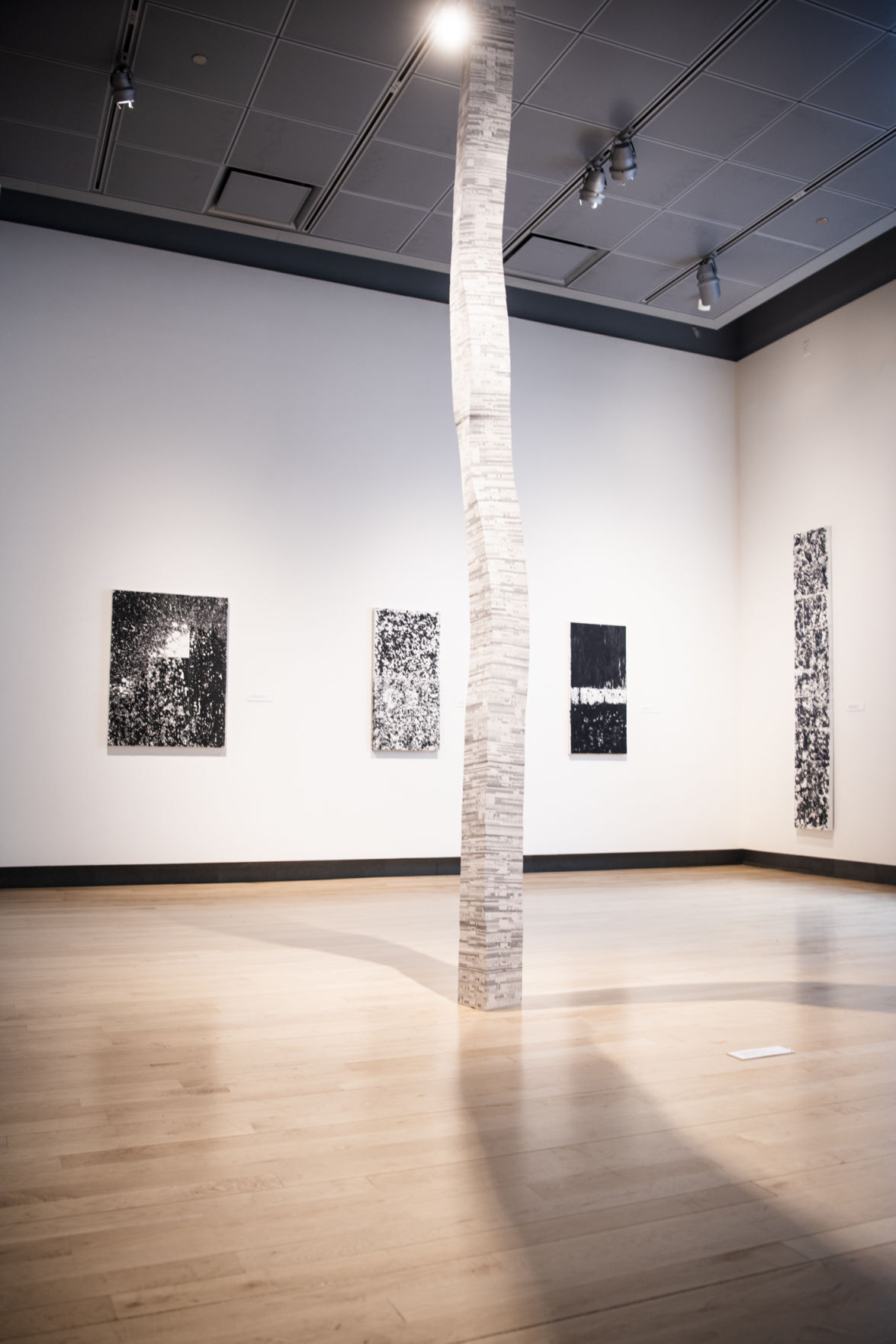 In 2010, a 700-ton boulder fell off the Rimrocks and smashed into Lodge's house. He escaped unharmed except for the emotional trauma.

Jon Lodge makes abstract art with control and chance in mind. His favored description is that he designs “systems of planned randomness” influenced by music as much as visual art.

The Billings resident studied jazz and composition and then ran a commercial printing shop before going full force into visual art. His tools aren’t brushes, but printing shop techniques, grid designs, squeegees, squeeze bottles and more that make it appear as though the pieces might have generated themselves.

“Fracture,” his first solo exhibition at the Missoula Art Museum, comprises black-and-white pieces, some very large, made with his self-designed systems. The title comes from “processes and procedures, based on how the work looks," he said, since the art really does look like "fractures and fissures and fragments."

They don’t have any narratives — he likes to think of them in terms of music without words, that leave you with only the sensation of sound. When you take away any sort of implied story, “you can do anything you want. You can build anything you want,” he said.

All of the work was made since 2020 except for one piece that dates to 2018 that has been reworked into a new form. Lodge, who retired several years ago from Artcraft Printers in Billings, lives in a 7,000-square-foot industrial shop in downtown Billings. He and his wife, Jane Waggoner Deschner, who also is an artist, have studio space and a private gallery.

The pieces in “Fracture” are not related to COVID in any direct way. Nor are they directly based on a notable “fracture” in his life. In 2010, a 700-ton boulder fell off the Rimrocks and smashed into their house. He was at home at the time and escaped unharmed except for the emotional trauma — the house splintering into pieces, the sound, their whole life fracturing into bits.

Lodge’s path to visual art is unconventional. He grew up in Red Lodge, and was already taking trumpet lessons when he first heard Miles Davis and Dizzy Gillespie. Then he landed in Boston at the Berklee College of Music during the 1960s when the genre began transforming rapidly into freer styles and fusion.

“Everything was in an evolution you know, in flux and experimentation and moving and shifting and evolving, so that was exciting,” he said.

While at Berklee, he worked as a photographer and an art director shooting performances for the marketing department at the college. He had a darkroom and time to experiment with different techniques in black and white, a through-line to what he does now. He continued performing jazz through 1973 and returned to Montana, where he didn’t keep up photography much. In the early 1990s, though, he saw a piece in a museum in New York that spoke to him, and he began making visual art. The heady musical ideas, photography, printing work, graphic design, all “moving around and merging with each other” fed into his style.

Earlier on, he experimented with color, but circled back to his beginnings with black-and-white, since it emphasizes the form more readily. (His father was a printer at the Carbon County News, which may be a factor as well.)

While all the work feels related, he’s developed a number of different ways of making them.

“Monochromatic Monolith” appears to be a pure black canvas from a distance, but as you get closer you realize the surface isn’t flat — it’s dense with shredded vulcanized rubber he harvested from a tire shop near his studio. The multi-step process involved black gesso, tape to imply a grid, and the piles of soft, curling rubber, that resulted in the final piece, which is “like this null, or void area for sound and light absorbed into the blackness,” he said. To him, it goes back to Thelonious Monk and his dynamic use of space. (He once said, “the loudest noise in the world is silence.”)

“Stratafracture” has subtle musical references as well. It’s a series of 10 panels of black disrupted with horizontal white lights at seemingly regular intervals with speckles of white, and also uses older processes from printing: carbon paper, which was used to make copies. Those are laid down onto white gesso. The variable textures are “self-generating” from the natural interactions — gravity and surface tension. He placed some them outside in July and August, so the heat and wind change “the characteristics of that texture underneath the carbon paper.” Others, he placed face down in the alley.

The vertical grid of white stripes were cut according to a Fibonacci sequence. “So that’s like a grid that runs through that totally random system. That part of it is constant, which really …. gives it form” and results in a “whole system that’s being fractured.” He thinks of it as a musical piece — with the elements referencing melody, harmony and rhythm.

He’s also made sculpture pieces with paper, like one that’s made of 31,000 sheets in a slightly spiraling column that stretches 17 feet high, held aloft by a cable. There are dizzying patterns on the sides created by the repeated numbers of individual pages, courtesy of a system based on the Fibonacci sequence. “It's taking the two dimensional surface of the type, and you can translate it into the third dimension,” he said. The pages themselves are from Montana Lawyer magazine and if you picked up one sheet, it would appear to be like any other page — text, photos.

In the center of the gallery, you’ll see a set of related works. One, on the floor, appears to be a massive book, laid half open. It’s called “Cumulus Undulatus Fractus,” and it is made of 8,915 sheets of paper, measuring 23 by 35 inches and weighs hundreds of pounds. (“Cumulus” means pile.) He made it with a “total, planned random chance system of printing.”

The final presentation was improvisation — he made the piece as a single stack about 45 inches high and shipped it to Missoula on a skid. His original plan was to place it in the gallery, and then he and the curators would “take a run at it” and knock it over onto the floor, ideally spreading the sheets out 10 feet or more into a “random scattering.”

While it worked in tests he conducted with small stacks, this one was so much heavier that it fell in place like a book half-open on display, which made him “totally happy.”

“I love the fact that that's what happened, that's how that went down,” he said. It’s another element of planning and randomness and fracturing.

He used the plates to make a zine that accompanies the show. He had a pressman “forget everything he’d ever knowing about printing” regarding ink and water balance and other methods to control a regular image. Papers were re-run through the plates and then cut into smaller pieces for the print piece, another fracture in the system.

As he said, “the title of the show describes the work and the concept.”

Jon Lodge’s exhibition, “Fracture,” is on display at the Missoula Art Museum through July 17.

It’s a musical adaptation of the short 1970s children’s cartoons, bouncing from song to song without too much dialogue between.

A new tree has gone up on the Westside.

One sunny but cold morning in late April, the sounds of one particular art class were indistinguishable from a construction site.

As you’d guess from the title, “Kingdoms of Fire, Ice and Fairy Tales” is a wide-eyed exploration of nature, making three stops around the wor…

River City Roots Festival will be back this year

One of Missoula’s biggest summer events, the River City Roots Festival, will be back this year.

From 5-8 p.m. on May 7, the opera house turned music venue will be open for an art show, with contemporary concert photos, historical pictures and memorabilia on display.

There’s nothing quite that mini about the Mini Show anymore, even though there are some small pieces among the 81 works, whose creators range …

Want to help preserve the history of Missoula music?

Things to Do: Dance on film, IWFF finale, and Fringe Fest

Here's a quick guide to arts events happening around Missoula in the next week.

Treasure State Studios has been renovated and stocked with equipment for shooting, editing and mixing for local and visiting productions.

The week started off with a flurry of concert announcements for KettleHouse Amphitheater, plus a new date for the Wilma, indicating a summer will look and sound a lot more like 2019 than 2020.

Jon Lodge's exhibition "Fracture" is on display at the Missoula Art Museum. Lodge, a Billings resident, studied jazz and composition and then ran a commercial printing shop before heading straight into visual art.

"Fracture," Lodge's first exhibition, comprises black-and-white pieces. The title originates from "processes and procedures, based on how the work looks," he said.

The entirety of the collection was made between 2020 and now except for one piece dating back to 2018.

In 2010, a 700-ton boulder fell off the Rimrocks and smashed into Lodge's house. He escaped unharmed except for the emotional trauma.