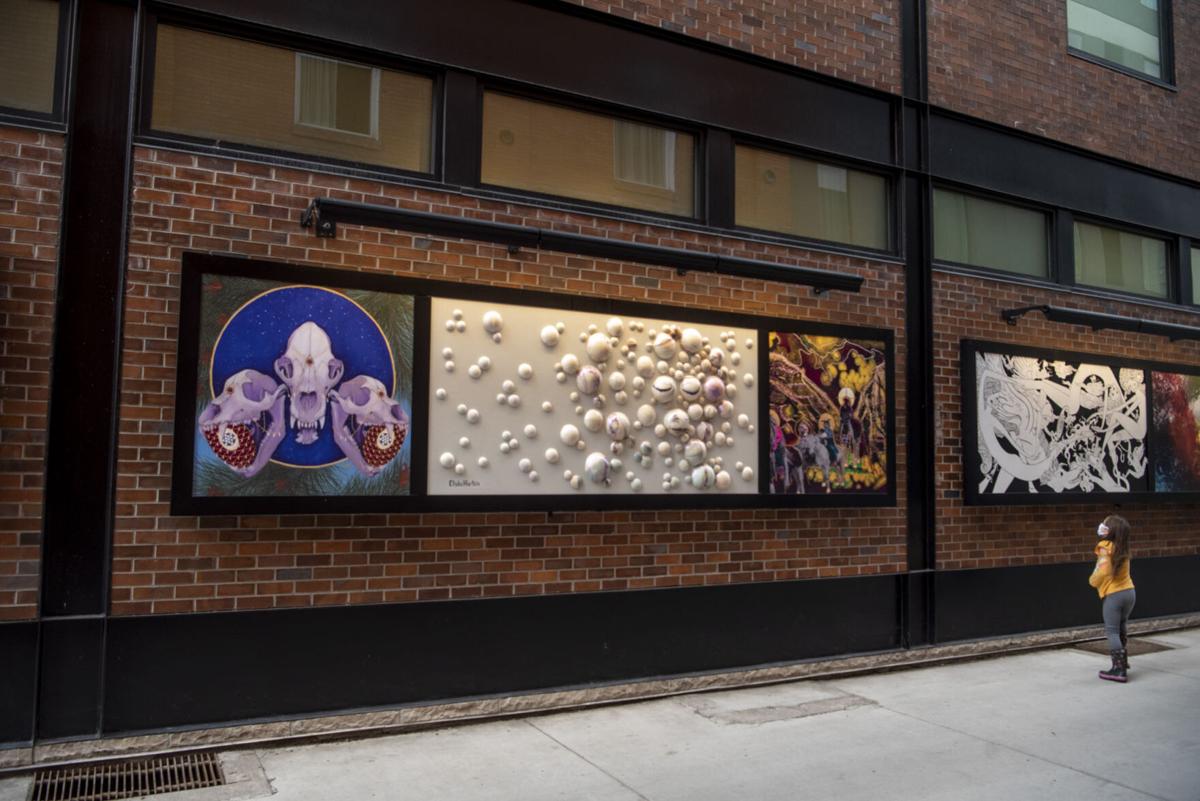 Allez! Missoula has opened a new exhibition called “Emerge” at its space on 120 N. Higgins Ave. 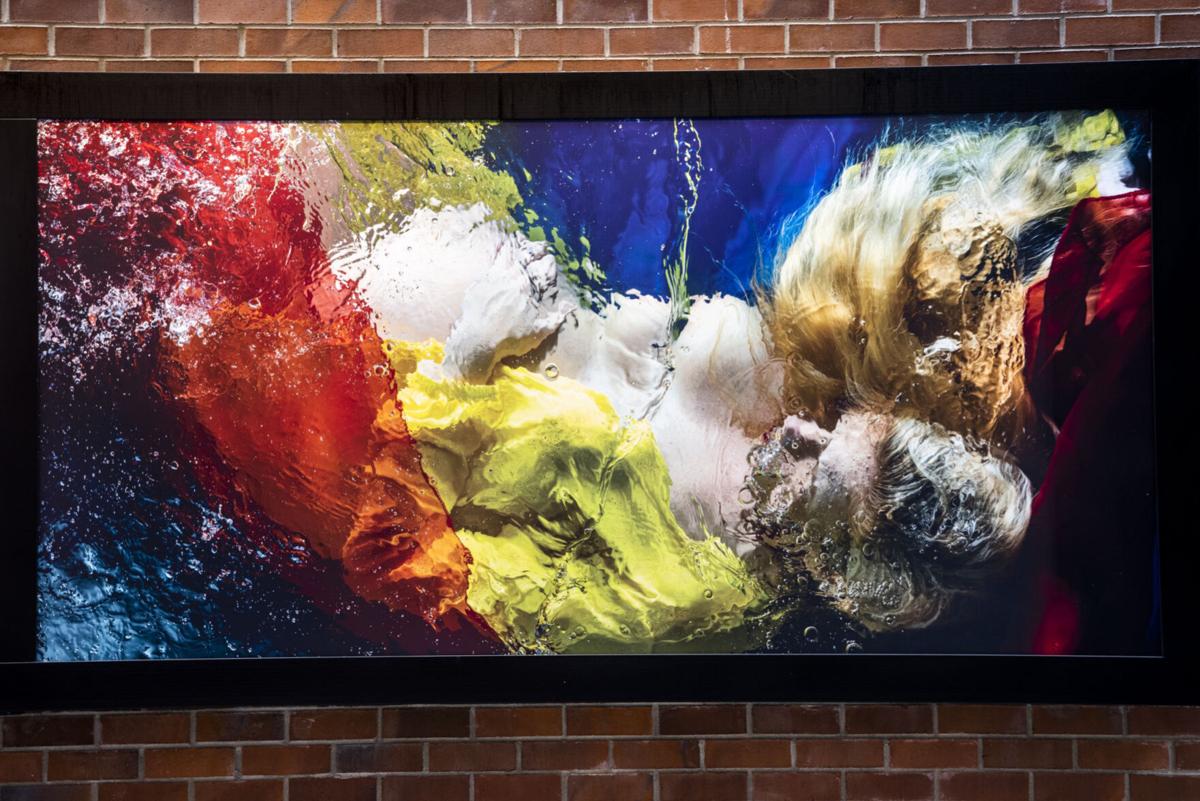 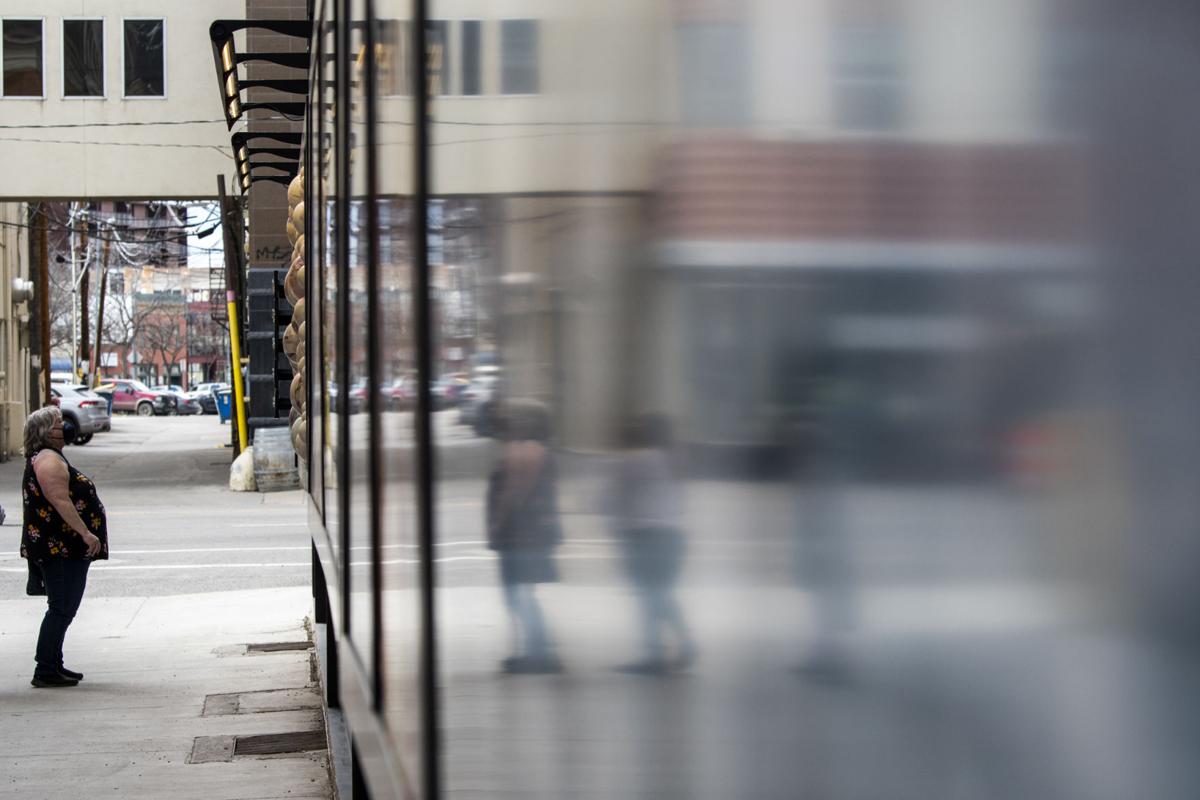 Patrons view the exhibit 'Emerge' on Tuesday in the alley at 120 N Higgins Avenue. 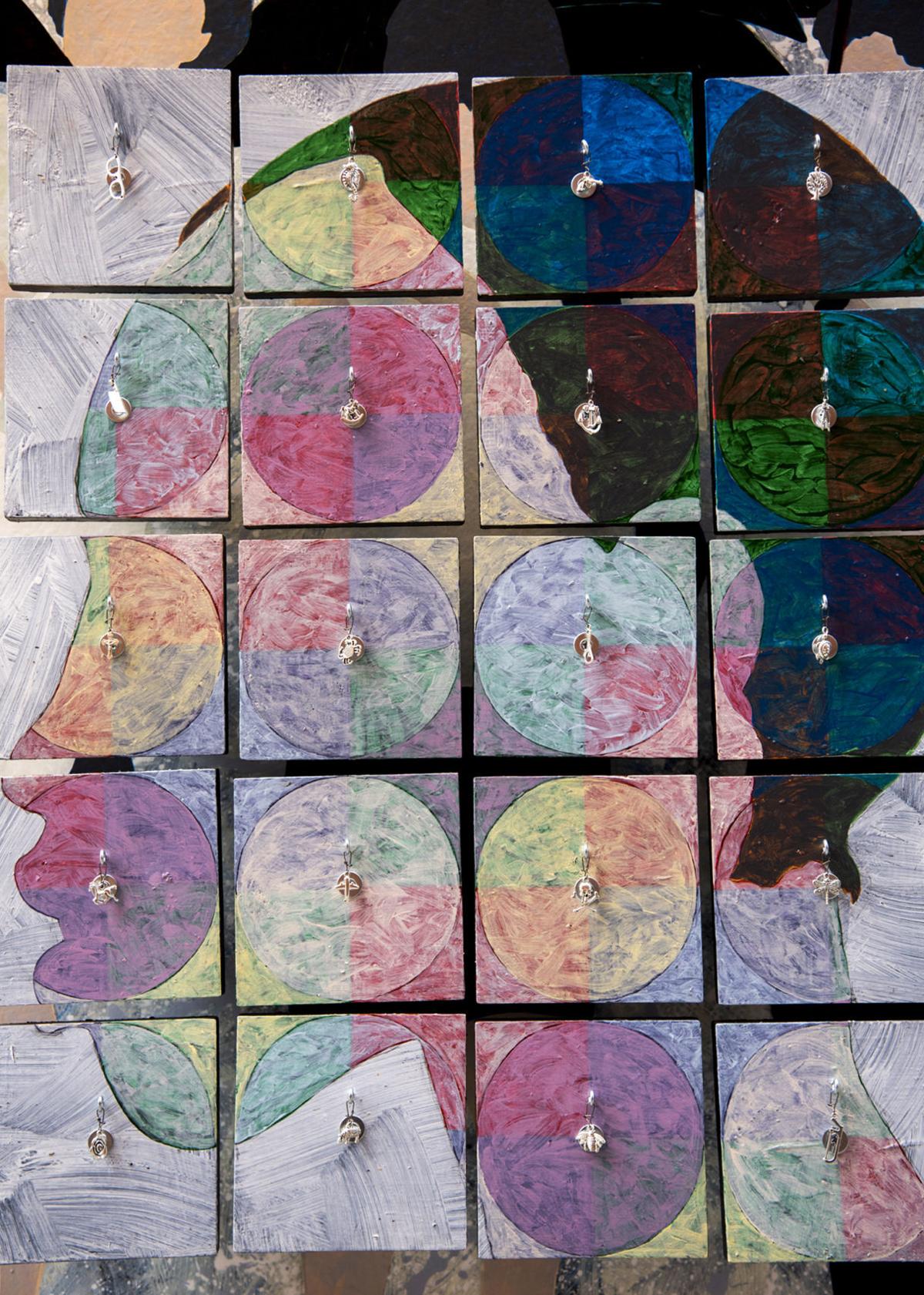 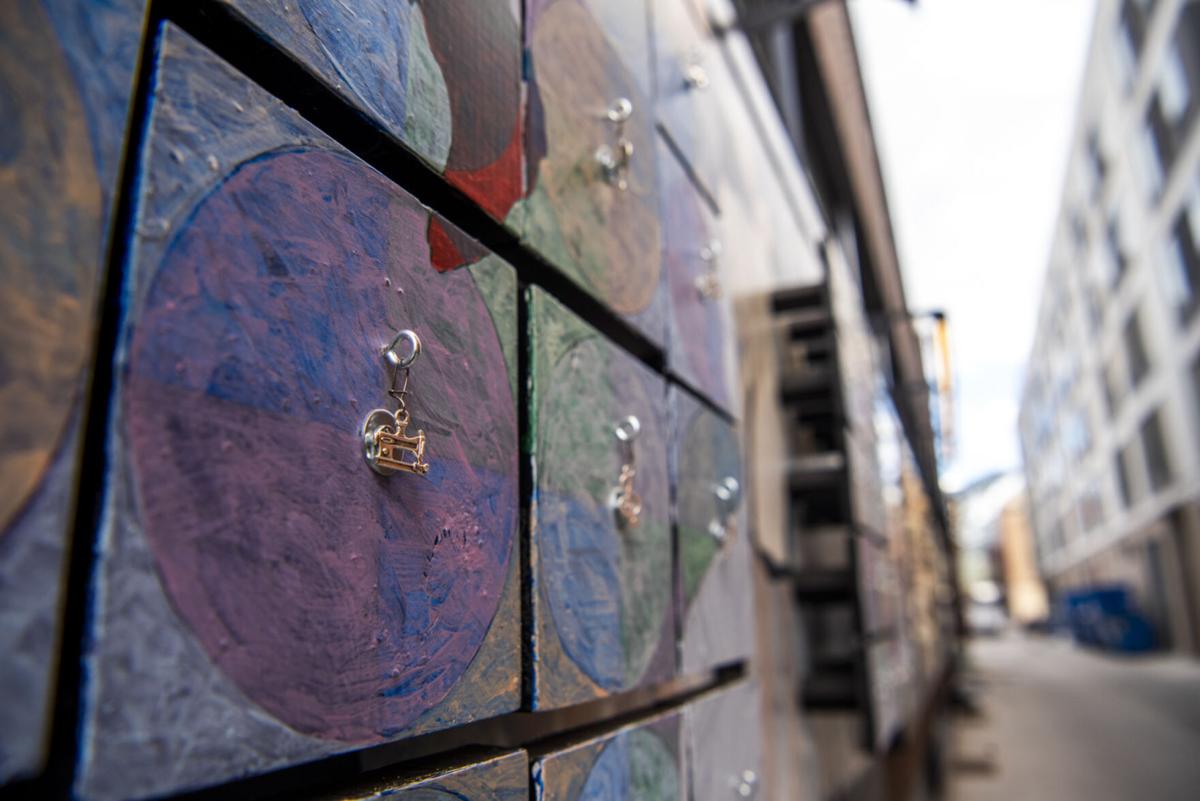 Allez! is hosting the work of multiple artists in their current exhibit "Emerge." 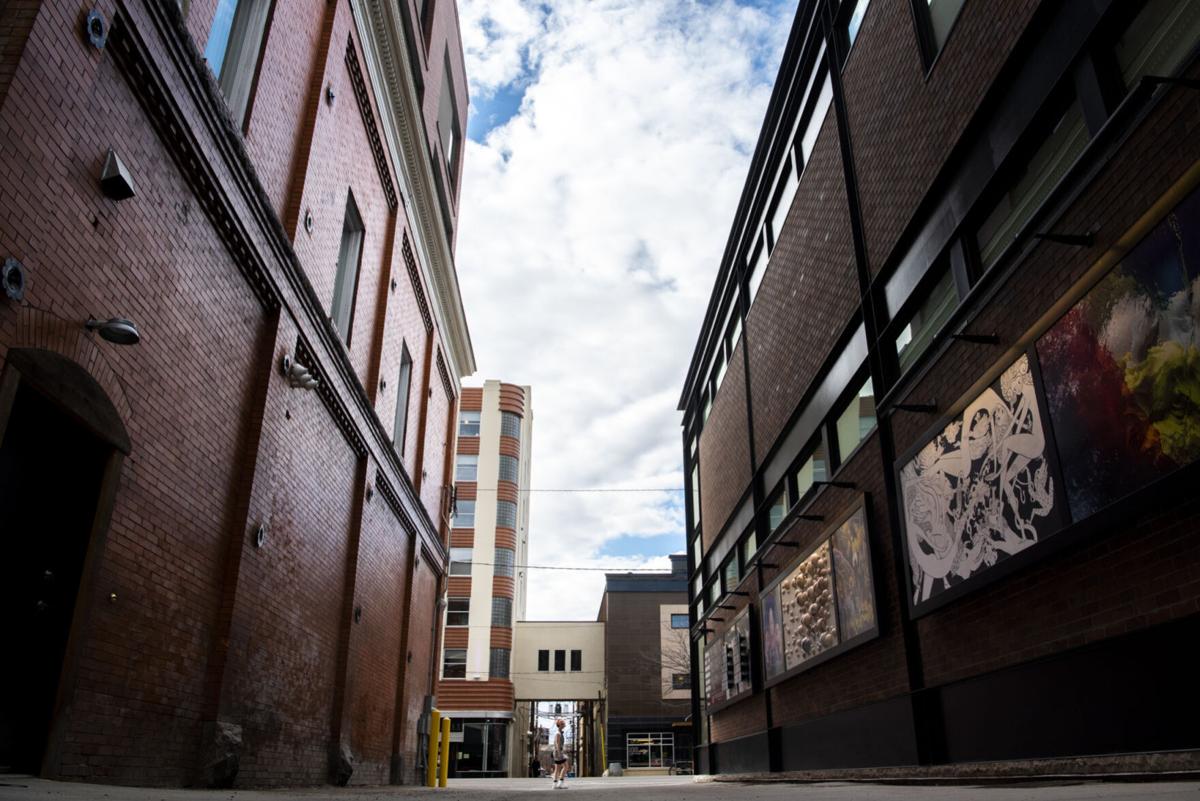 The Allez alleyway at 120 N Higgins Avenue is featuring a new exhibit "Emerge" from Friday, March 12 through Thursday, July 8.

Passersby on Higgins can marvel at the beautifully odd spectacle of a line of murals lighting up an otherwise nondescript alley with messages of individuality, life’s little moments and social justice.

A young Monica Gilles-BringsYellow thought she wasn’t talented enough to study art, so instead pursued a degree in history. Now the relatively new artist has a piece showcased in the most recent Allez! Missoula mural exhibition that showcases her love of art and history.

“I hope any people who see my art take a closer look at history and Native American history in general, and you know maybe they start looking at different forms of art,” said Gilles-BringsYellow, who focuses much of her work on her Confederated Salish and Kootenai roots.

Allez! Missoula acts as a gallery of murals, meant to liven up the downtown alleyway, showcase local artists and create easy access to art.

Allez! Missoula’s Program Director Lillian Nelson said the gallery of sorts has been around since roughly the beginning of the pandemic. She added that it is funded out of the pockets of Brian and Karen Sippy, who own the building that houses both the Radius and Relic galleries and displays the alleyway murals.

“We want to encourage artists to kind of push the envelope a bit,” Nelson said. She said the artists ran with the creative freedom and she’s happy with how it turned out.

Some pieces included three-dimensional elements, like the ceramic bubbles on Elisha Harteis’ mural or the panels jutting out of Michael Dinning’s piece, each adorned with a small charm. Others used vibrant colors, like the elegant portrait of a pregnant woman by Jonathan Qualben and resin painting of a horse by Kelly Bourgeois. Meanwhile, others depicted complex and intriguing stories using only black and white, like Michelle Postma and Eric Carlson.

She had never created a mural before, but she was excited to try it out. She created her piece, “Journey,” using various mediums, including acrylic paints, gold leaf and historic photos. The mural showcases four Salish-Kootenai riding out of the mouth of Hellgate Canyon. Bright colors pop out of the image and an abstract landscape and bull trout, representing Missoula’s namesake, make the mural uniquely inviting.

She drew on the theme “emerge” by drawing parallels between the beginning of the reservation era, when Native American tribes were being forced off of their land and into unfamiliar homes, and present-day social injustices.

Gilles-BringsYellow said the racial injustice, food scarcity and general sense of crises happening in our country and world now reminded her of the atrocities committed against her ancestors. But she has hope that we can learn as a society to take care of one another, the way she’s watched her family care for one another her whole life.

“It felt like we as a society we’re trying to emerge in what we were going to become,” she said. “Like we’re in that stage where we haven’t come out fully into the open and we’re just trying to figure out what it is we’re dealing with. And so it kind of reminded me visually of somebody’s kind of in the shadows and they’re about to come forward.”

Gilles-BringsYellow always tries to use real people in her paintings, whether by depicting them in her painting or by using historical photos like she did in “Journey.”

“I like that they were real people,” she said. “I think that people don’t really tell the stories of Native Americans and so you will get people who use Native American imagery in their art, but... they don’t have a name, they’re not tied to a place, they’re just like ‘oh you know Native Maiden’ or something. When it’s like ‘no we’re actual people. We have actual backstories. Our histories are also important.’”

When COVID-19 hit Gilles-BringsYellow was still fairly new to art, she’d been getting her start at pop-ups and craft fairs, but those stopped happening. In the anxiety of the pandemic’s uncertainty she didn’t paint for around a month. But she said in that time she was able to think about what she wanted her style to be and after that month began finding new inspiration.

“Well if I get sick am I going to you know go out doing the same thing?” Gilles-BringsYellow asked. “Or am I going to be really mindful about what I’m creating and take my time and see how far I can push certain things?”

She did eventually get the virus and it made her really sick for a while, but she lived and the first things she created after that experience was “Journey.”

Jessie Smith created her mural “Blessed are Those who Overcome the Harshest Realities” in honor of those persevering amidst the COVID-19 pandemic, as well as those who were lost to the virus.

“Because of the pandemic my part-time job got shut down,” Smith said. “So, for me that was really scary and it’s like ‘OK, I have to find pretty much any art opportunity I can just to make money and make sure my bills are getting paid.’ So, I was really thankful that the Allez! art call was around the time that that happened.”

The painting depicts three black bear skulls against a starry night sky encased in a golden halo. The skulls to the left and right hold intricate Faberge eggs in their mouths and ponderosa pine branches border the starry sky. Each detail of the image symbolizes some facet of society and the effects of the pandemic.

“I just really hope that the piece inspires people to take action in their community to help make our communities a better place and make them more equitable, and just help people pull each other out of this really dark time in history,” Smith said.

Each of the three bear skulls represents 100,000 dead to coronavirus. While there were 300,000 lost at the time Smith painted the piece, the virus’ death count has since peaked over half a million. The two eggs — decked in red, white, blue and gold with stars and pearly teardrops — represent the U.S.’s fixation on power, wealth and patriotism over its most vulnerable populations.

“In the end this piece is ultimately a prayer for all of humankind; may we emerge from this hour of darkness resilient and equal,” Smith wrote in her artist statement.

Allez means “come on” or “let’s go” in French, program director Nelson said. It’s also a play on words, as it sounds like the word “alley.” It’s meant to be a call to action for artists as they work to beautify Missoula’s alleys and create a lasting impact through art.

While the Sippys pay for the exhibition now, Nelson said the hope is for it to be a self-sufficient nonprofit at some point. They also aim to always pay their artists a good price. Nelson dreams of opening up Allez! Missoula exhibitions around downtown Missoula, not just in the Higgins location.

Last Friday, Allez! hosted a low-key opening of the exhibition, which was mainly attended by the artists and their friends or families. The statements and bios from each artist was read out loud and the murals were revealed with a flourishing drop of a curtain.

“Your heart kind of catches and it’s just like, ‘oh my gosh I get to see the veil drop and my piece looks super cool,’” Smith said. “It was just a really big ‘wow’ moment.”

Gilles-BringsYellow said it was weird, but good, to see people at the opening who she may have met online during the isolating year of COVID-19.

“I just hope that people will get some beauty out of it and give them a moment to stop and pause as they’re walking down the street,” Nelson said.

Wildlife Film Fest goes online, outside for a month

The International Wildlife Film Festival is expanding its habitat this year, with movies streaming online and at outdoor screens around town for a full month.

The swing is real and the delivery is virtual this year at the Buddy DeFranco Jazz Festival.

Allez! Missoula has opened a new exhibition called “Emerge” at its space on 120 N. Higgins Ave.

Patrons view the exhibit 'Emerge' on Tuesday in the alley at 120 N Higgins Avenue.

Allez! is hosting the work of multiple artists in their current exhibit "Emerge."

The Allez alleyway at 120 N Higgins Avenue is featuring a new exhibit "Emerge" from Friday, March 12 through Thursday, July 8.