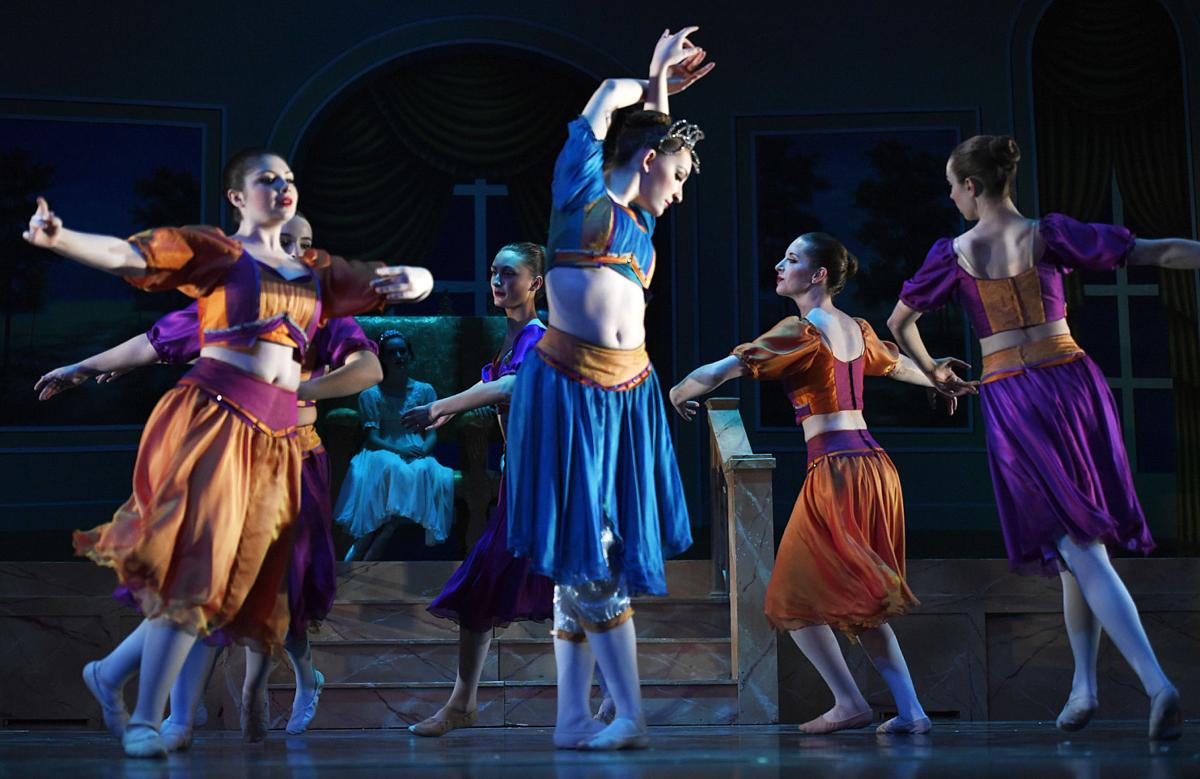 A group of dancers surround Pearl Miller of Hamilton during a Garden City Ballet rehearsal of "The Nutcracker" on Wednesday night. The ballet opens this weekend for the 32nd year in the Montana Theater on the University of Montana campus. 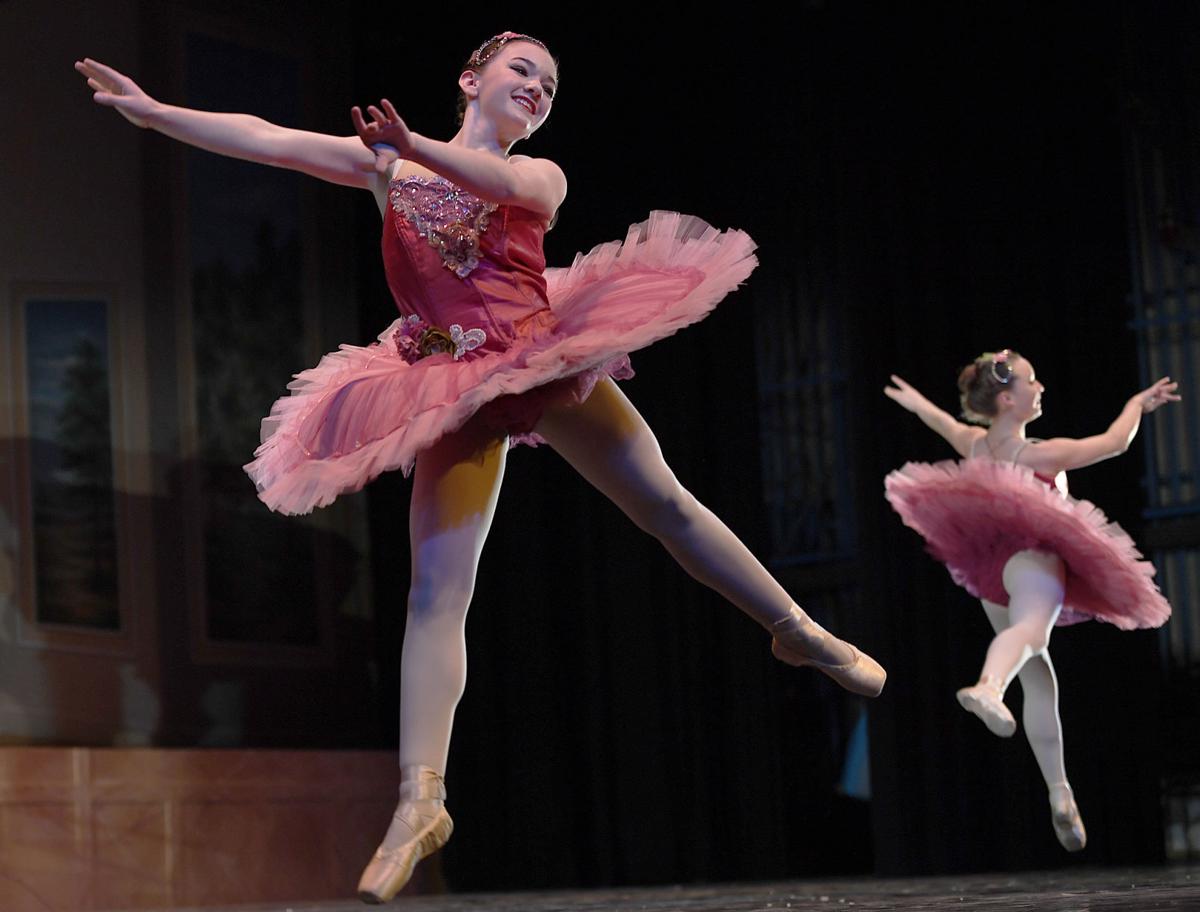 Annika McLean, 14, leaps through the air as she dances for the crowd. 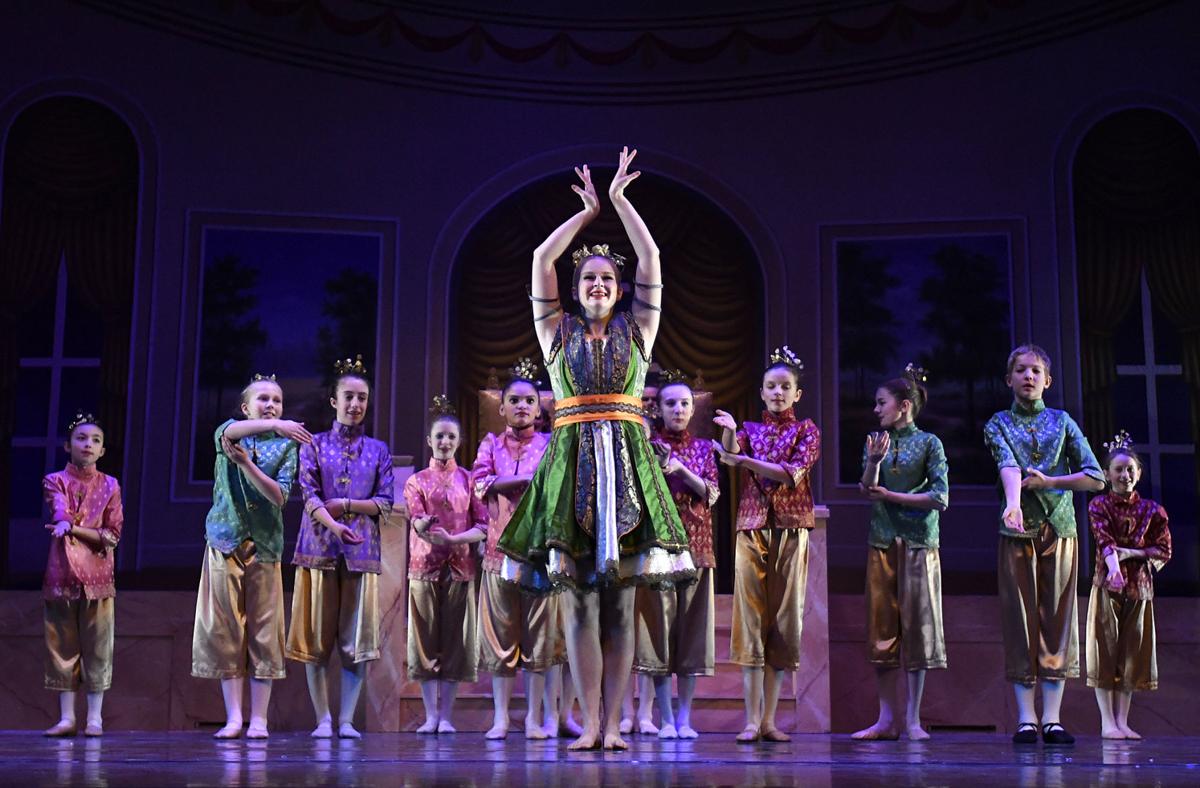 This year marks the 32nd-year of the Garden City Ballet's "Nutcracker".

A cast of gingersnaps stepped onto the stage at the Montana Theater on Tuesday night, their first time in front of 500 seats for this weekend's "Nutcracker."

"Mother Ginger knows everything about being on stage, so you will listen to him," said director Michele Antonioli.

The Garden City Ballet's "Nutcracker," a 32-year tradition, changes with time as directors and choreographers come and go, and a cast grows from gingersnaps to lead roles.

"The day after 'Nutcracker,' they're totally wiped out and exhausted," Antonioli said. But they're already giddily picking out parts for next year.

"These little gingers know that next year, they might be able to be mice," she said. "It's an unwritten hierarchy they that they buy into and get excited about."

Maeve Fahey, for instance, started as a gingersnap. Now a student at Hellgate High School, she is the Snow Queen.

Antonioli, who's directing for the third time since a stint in the 2000s, said "it's fun to watch the evolution." They start out as the gingersnaps like these ones and grow into accomplished dancers.

The GCB's "Nutcracker" is a community effort, in high demand for tickets and participation. The auditions are held in September, and the organizers make an effort to find a role for every child who wants to perform.

They find enough parts to fill the classic ballet by Russian composer Tchaikovsky, a fairy-tale journey from Christmas-time at a family home into a magical world of animated nutcrackers, sugar plum fairies, and Mouse King.

This year, about 110 cast members signed up, ranging in age from 7 through to University of Montana age and beyond. Talla Gass, a Sentinel high-schooler who studies at On Center for the Performing Arts, won the role of Clara.

"We're very excited to have her," Antonioli said.

Local film and theater actor Jeff Medley is returning as Drosselmeyer for the fourth time.

Two special guests from Salt Lake City, Taylor Stanger and Rylee Ann Rogers, will be featured. Stanger will dance as the Sugar Plum Fairy and Rogers as the Cavalier.

And just because it's a tradition doesn't mean it's not different.

"If people are looking for something new, they're going to find it," said Antonioli, who teaches dance at the University of Montana.

A total of 11 choreographers have provided new material this year. They represent working professionals from the Ballet Arts Academy, the On Center, the Downtown Dance Collective and UM, plus a choreographer from the now-departed Libby production of the "Nutcracker."

The show provides about 15 or so different opportunities for choreographic input, she said. While many shows are choreographed by a single choreographer or a team, they opted for a group effort.

"This year, we decided to be a little more inclusive and open up the doors to a lot of different choreographers in town and bring in some fresh ideas," she said.

When Antonioli directed the show a decade ago, the Garden City production was a more intimate affair with a smaller cast.

"We had probably 35 performers versus 110, so coming back to this much grander version was exciting," she said.

The Garden City Ballet will present its 32nd annual Nutcracker this weekend. All performances take place in the Montana Theatre in the PAR/TV Center at the University of Montana.

Prices are $25 matinee plus fees or $30 for an evening show.

The full-length ballet runs approximately 2 hours, with one 20-minute intermission.

All he wants is a Red Ryder BB gun: MCT brings 'Christmas Story' musical to town

Be careful what you ask for. Be grateful for what you have.

A local production of a holiday classic will make a big return to the stage this weekend.

One of the classic Missoula holiday traditions, “The Nutcracker” returns to town this weekend.

Musicians can sign up for 5th and final Missoula Rock Lotto

At the fifth and final Missoula Rock Lotto, randomly assigned bands of local musicians will have only a week to put together a 20-minute set.

A group of dancers surround Pearl Miller of Hamilton during a Garden City Ballet rehearsal of "The Nutcracker" on Wednesday night. The ballet opens this weekend for the 32nd year in the Montana Theater on the University of Montana campus.

Annika McLean, 14, leaps through the air as she dances for the crowd.

This year marks the 32nd-year of the Garden City Ballet's "Nutcracker".