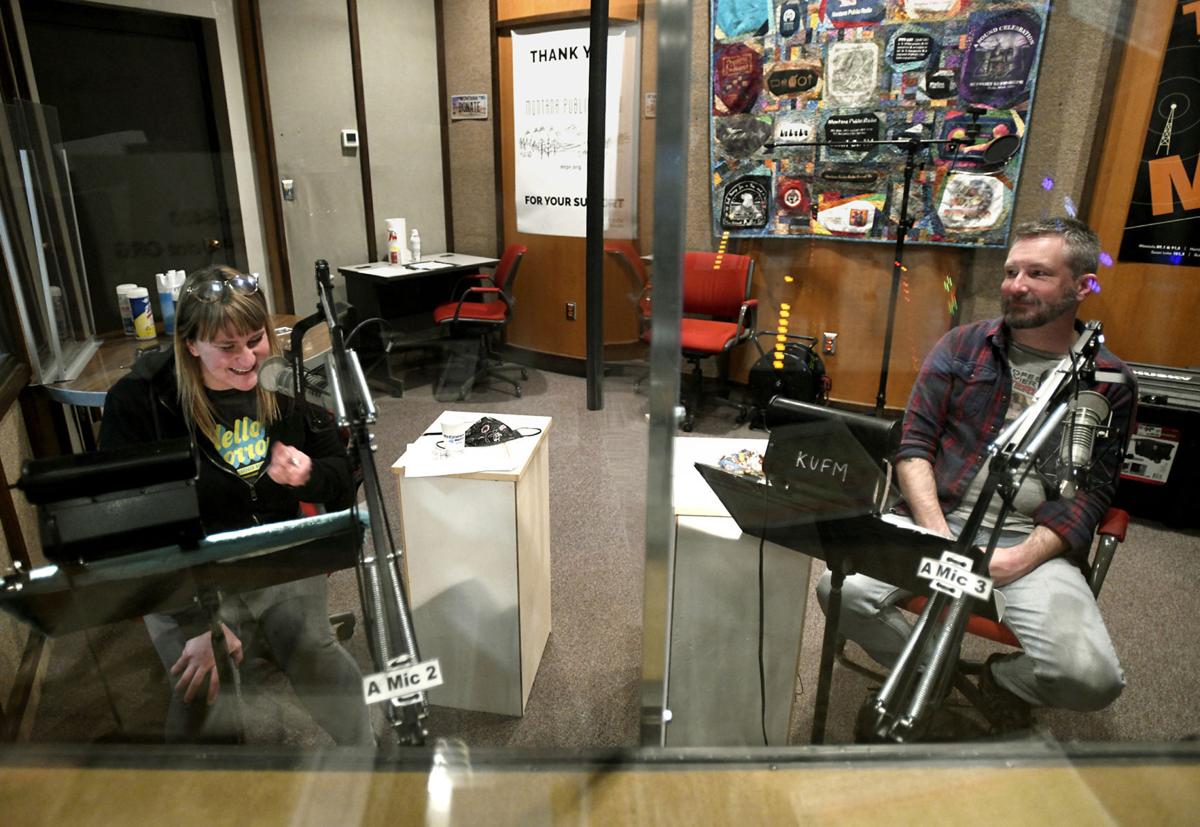 Rosie Seitz Ayers records voice parts for a short play as Michael Legg, the artistic director of the Montana Repertory Theatre, listens nearby in a studio at the University of Montana last week. The Rep is producing plays that can be accessed through smartphones. 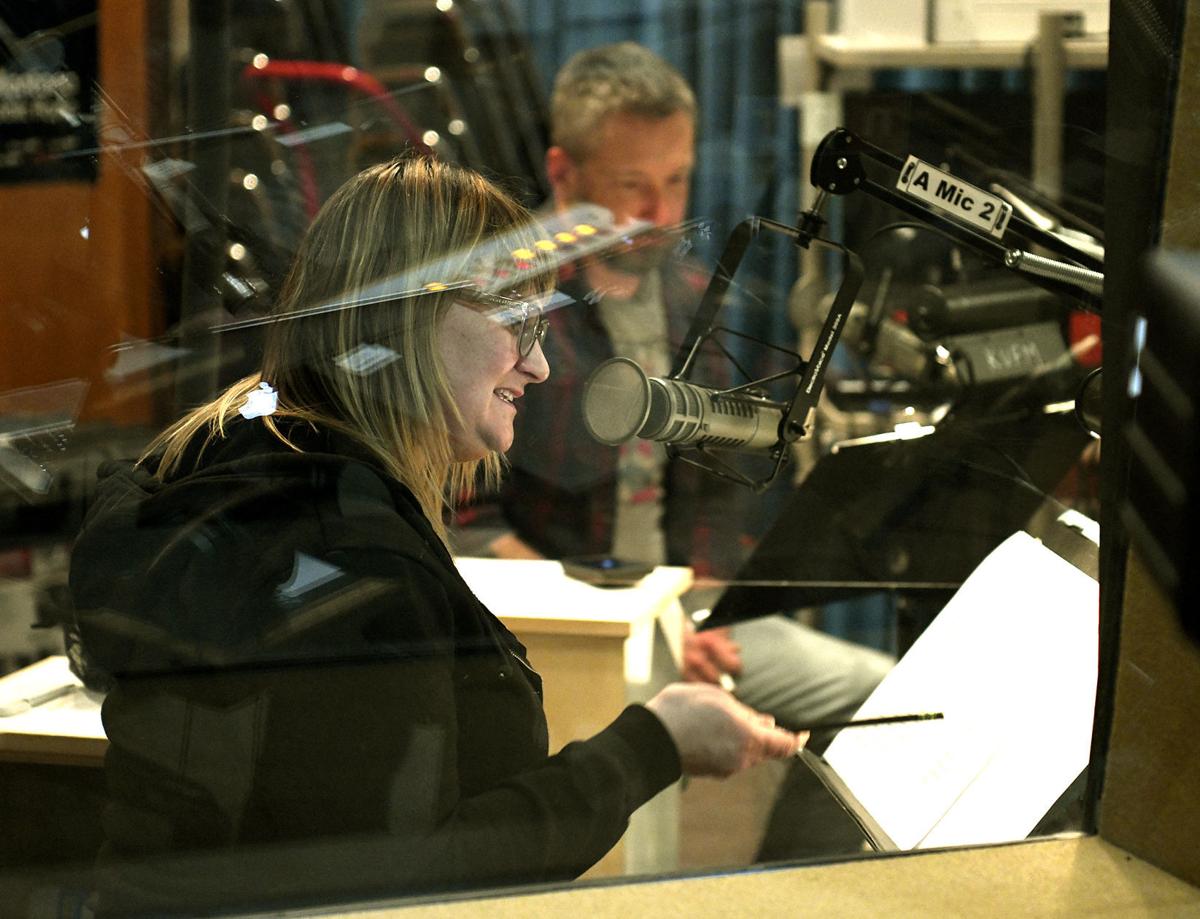 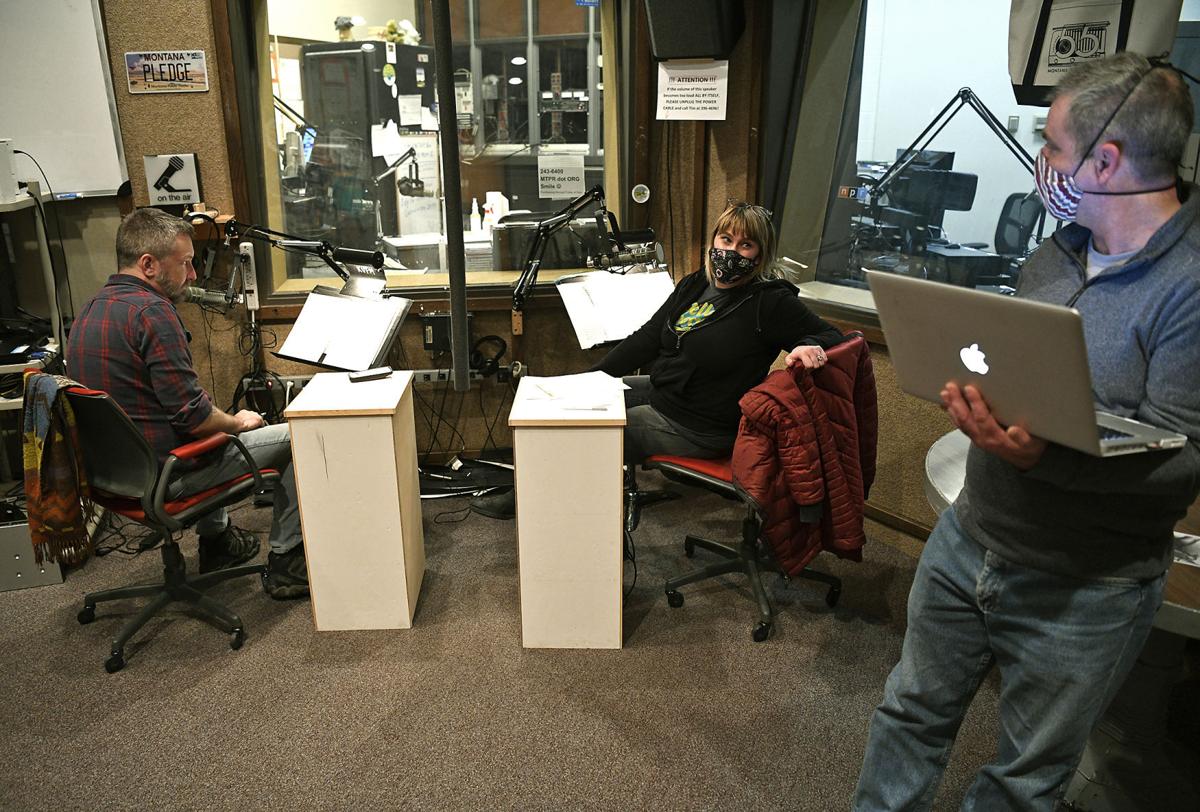 Michael Legg and Rosie Seitz Ayers talk with board operator Tom Berich as they record vocals for a Montana Repertory Theatre production last week at UM.

If you want to check in with the Montana Repertory Theatre this spring, you’ll have to get on the phone.

For “Plays on Call,” you’ll dial in to hear original short plays, in the five-minute range, designed for the times — “an audience of one."

For “Go Play!” you’ll download an app on your phone and then head to a specific spot around town to unlock an original short play, which could come in the form of audio, animation, text or something else, all created in a collaboration with the School of Media and Visual Arts at the University of Montana.

Michael Legg, the Rep’s artistic director, knows these don’t sound like traditional plays. He likes to think of them as experiences, or in the case of “Go Play!” a hybrid of geocaching, Pokémon Go and a podcast.

They were born of a question they began asking themselves about small-capacity theater productions in COVID: “How do we bring that to our audiences still, when we can’t gather?” he said.

He wasn’t interested in streaming video, since “we’ve all to some degree encountered Zoom fatigue.” He knows of other theater companies around the U.S. that have experimented with audio during the pandemic rather than try to adapt to video, which can require cost and expertise.

Since Legg took over in late 2017, the Rep, a professional theater embedded at UM, has produced site-specific short plays for small audiences around Missoula in a series called “Plays on Tap” that involved more casual experiences, including stops for a microbrew. They’re a way to produce original work with diverse and contemporary themes and collaborators, that might draw in people who aren’t in the habit of regularly seeing theater in formal settings.

For the first series, “Buckle Up,” you walked around downtown Missoula to parked vehicles, where actors in the front seats performed a play by a professional writer especially for this series. The second round, “Room Service,” was set in hotel rooms at the Campus Inn. The next entry, now twice delayed due to COVID, is a planned series of bingo-related plays at the VFW Post 209 downtown, which has a classic board on the wall. The second postponement eventually led to the idea for audio.

“We’re a podcast society now, and so this idea of delivering audio content makes sense,” he said.

The first entry, which will land the weekends of March 26 and April 2, features new work by seven playwrights. Some are from out-of-state, with national production credits, such as Emily Feldman, who wrote a play called “Go. Please. Go.” that the Rep produced in 2019, and Jen Silverman, Nubia Monks and Marisa Carr. Also on tap are three local writers: Jay Kettering (a frequent Rep collaborator), Shannon Sivertsen and Tyson Gerhardt.

The actors include Dale Raoul, a Missoula native who starred in “True Blood,” as Maxine Fortenberry, Hoyt Fortenberry's mother; and Jeff White, who’s been through Montana to shoot his part as Jimmy on “Yellowstone”; and local actress/director/comedian Rosie Seitz Ayers, who’s recording Kettering’s play.

The tone and subjects will be varied, from drama to comedy. Raoul, for instance, is acting in Silverman’s play, “Voicemails from Your Mom,” which involves alien abduction.

To hear them, you’ll sign up for a ticket and then receive a number and code and you’ll have all weekend to listen. When you dial in, you’ll get a list of options for the play. It might be a prompt like “to talk to your therapist, press 2,” Legg said. That would send you to Kettering and Ayers’ piece, “Speed Therapy.”

“The listener then ‘becomes’ a patient that the therapist is treating for 'selective mutism,’” Legg wrote in an email. “Because of COVID, the therapist has so many patients, she can only treat each one for 5 minutes, so she tries every way she can in the time she has to get the listener to talk. As her frustration mounts, her tactics escalate and hilarity ensues.”

The pieces will have soundscapes and audio effects produced by a professional in New York, Michael Costagliola, who designed Foley effects for the Rep’s adaptation of “War of the Worlds,” its touring play from early 2020, just before the pandemic.

Costagliola can work with the playwrights and develop ways to accent the actors’ voices from the East Coast, Legg said.

For the more technologically advanced effort, which is planned for mid-April, the Rep reached out to the School of Media and Visual Arts and Michael Cassens, an assistant professor, who’s mentoring two students on the project, Claire Spain and Miya Fordah, both media arts majors.

Cassens collaborated with the Rep on “Zombie Thoughts,” its educational outreach play last year, a theater piece with a choose-you-own-adventure interface, remotely bringing a story about dealing with anxiety to schools around Montana.

Cassens teaches game design, interactive media and “basically anything that can be gamified,” whether a real-world project or traditional games for computer, mobile or virtual or augmented reality. He and his students have collaborated regularly with other departments and organizations, such as “Zombie,” or a learning module on ethical hunting and outdoors with the wildlife biology program, and the Rocky Mountain Elk Foundation, for instance.

He paired the Rep with students Spain and Fordah, who worked with them much like they would a client. In the school, Cassens said they’re always excited about finding “where we can get our students out into the world” getting real experiences. The two are designing and prototyping the app and the “play” experience (no spoilers yet), which will be available through the Apple Store and Google Play.

Legg thinks the app could eventually get phased into a hybrid experience as with the “Plays on Tap” model from before the pandemic. Perhaps the app would direct you to a specific site, where there might be a cast, or a set or structures related to the play you’d experience on the app. There could be options to create an app-based piece that other communities around Montana could use, or potentially other forms that cross over into the guided narrative interaction that makes escape rooms appealing.

For more information, go to montanarep.org.

'Room Service': Have a beer, and then see plays set right in hotel rooms

Have a beer, get your room key, and head to a hotel room. That's the order of operations you might take after you've traveled to another city …

Behind the wheel: Montana Rep's experiment in car theater

Last weekend, a couple sitting in a sport utility vehicle parked by Red's Bar downtown got into a fight after a few drinks.

A police officer in Kalispell shot and killed a man Friday after responding to a report of a suspect driving a car into other vehicles on purpose, according to a news release.

Dial in for audio plays about space, travel and family with the Rep

Want some theater? First you call a number. Then you pick a selection read from a menu, ones like “check your voicemail.”

Rosie Seitz Ayers records voice parts for a short play as Michael Legg, the artistic director of the Montana Repertory Theatre, listens nearby in a studio at the University of Montana last week. The Rep is producing plays that can be accessed through smartphones.

Michael Legg and Rosie Seitz Ayers talk with board operator Tom Berich as they record vocals for a Montana Repertory Theatre production last week at UM.