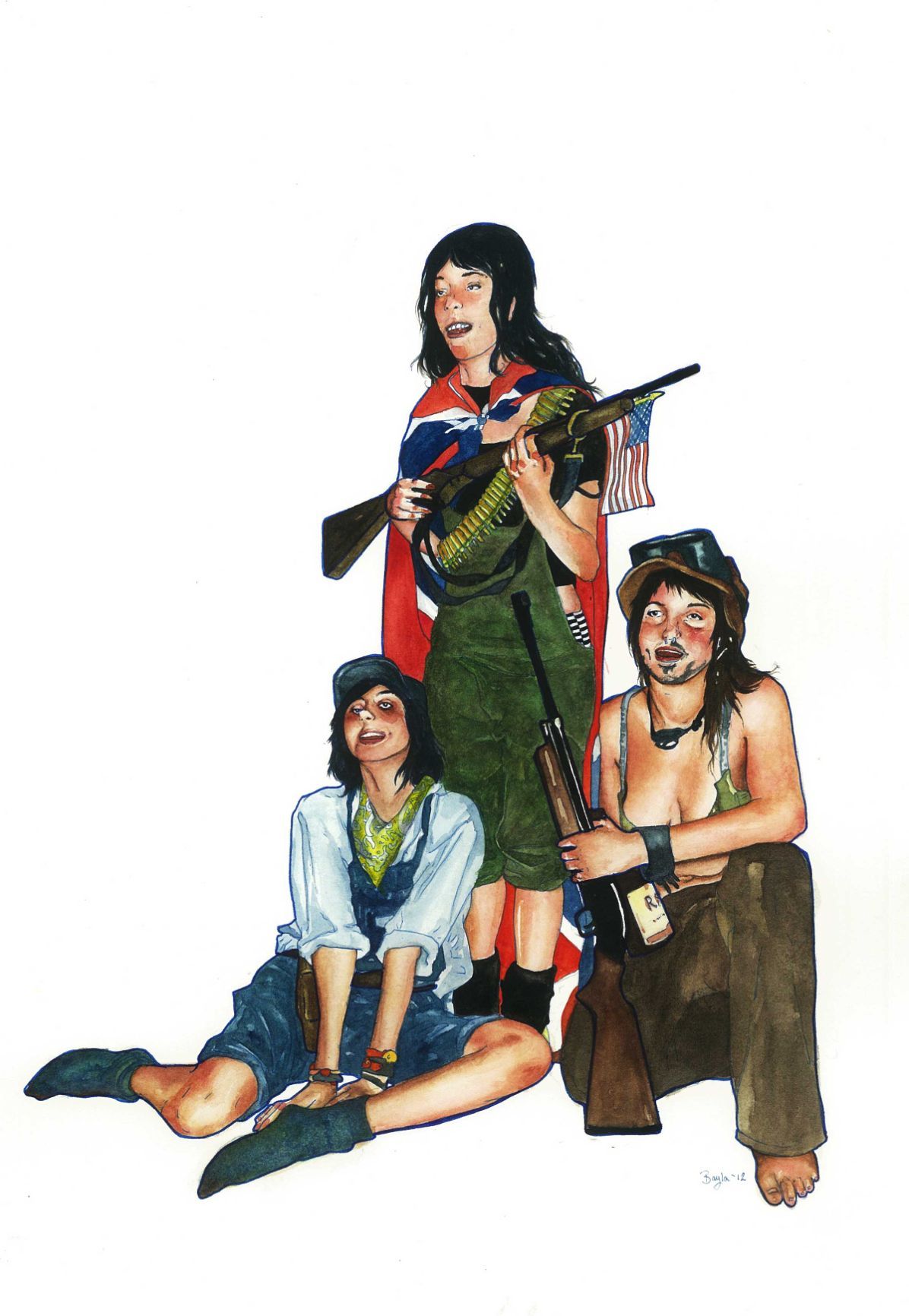 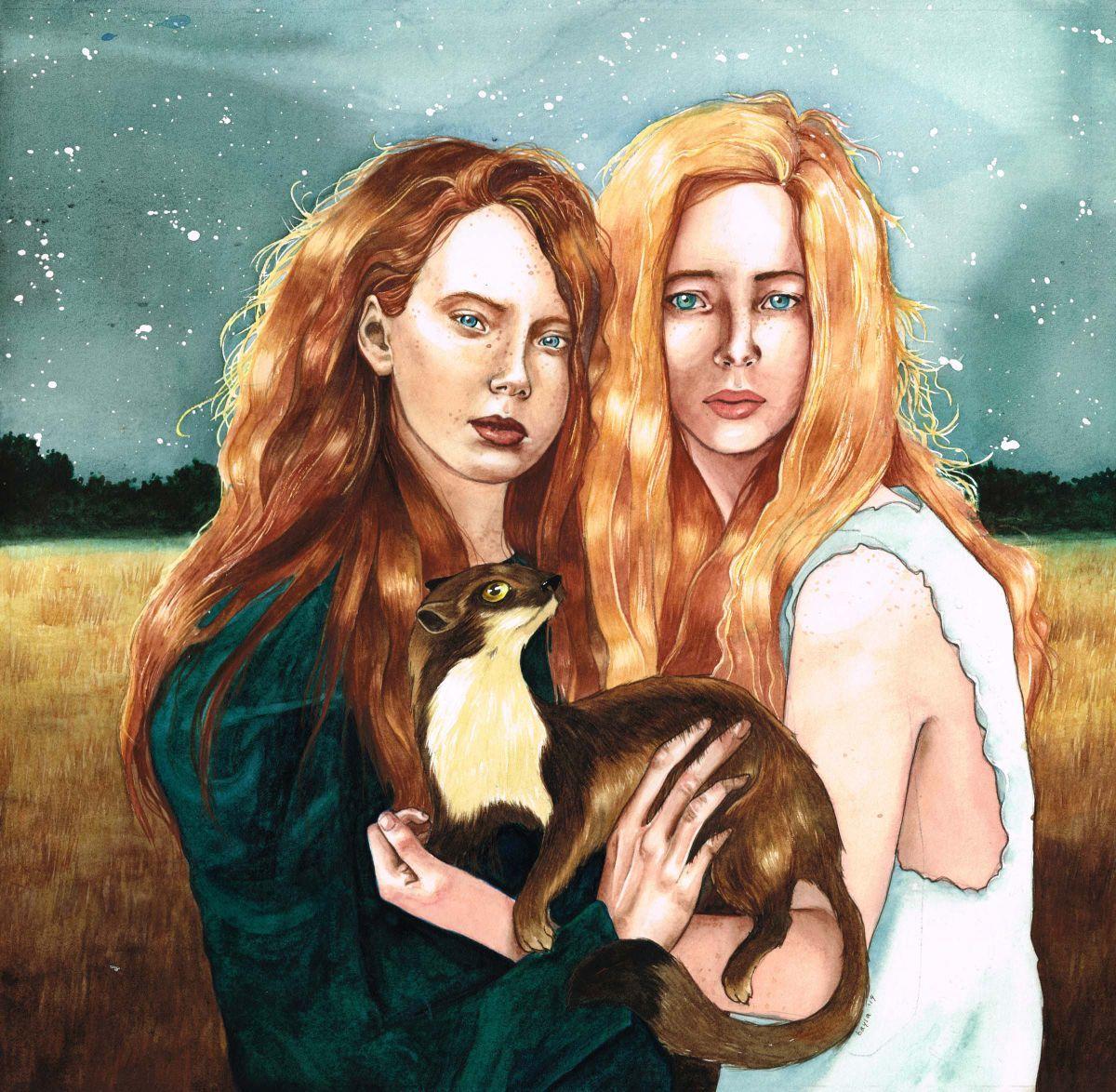 In the 2015 Montana Triennial, a statewide survey of contemporary art, juror Peter Held dedicated one wall of the Missoula Art Museum to a theme: "We the People."

A young woman brandishes a gun while taking a swig from a can, casually standing in front of an American flag.

A young man sits on the ground, also swigging from a can - wearing red swim trunks and a flag bandanna.

With simple titles like "Zoe" and "Will," they're ambiguous enough to seem to be state-specific commentaries.

But the paintings are from a series called "Kids" that Arietta began back in 2012, long before she moved to Missoula.

The works in the Triennial weren't even painted while Arietta lived in Missoula.

"They could be anyone anywhere in the United States. So that includes Montana," Arietta said. "It's a commentary on kids everywhere."

She said she's honored they were selected, and it's a high compliment that they seamlessly blended into the Triennial, which always results in a fair share of rejections.

As a whole, Arietta, a Hartford Art School graduate and New York native, has fit right in with the Missoula art community since moving here from Sitka, Alaska, a year ago.

Besides her watercolors in the Triennial, you may have seen her piano in the pocket park at First Interstate Bank downtown - a colorful upright covered with ghosts, bisected, spirit-like animals on tundra landscape.

She's had solo shows at the Buttercup Cafe and Gecko Designs, and group shows at galleries like Radius and E3 Convergence.

Earlier this week, she was unloading 50-some works, mostly watercolors, for a solo exhibition of illustrations at the Zootown Arts Community Center's large main gallery.

It reflects the myriad bodies of work that professional illustrators develop: her personal Kids series, commissions for companies and tattoos, a small selection of birds, and a series based on animal skulls.

Many of her personal works are landscapes, some with human figures and some not, that have a somewhat ethereal bent: An Alaskan treeline with a woman seemingly floating downward. A hyper-detailed, fairy-tale-like forest with a female figure.

"I really enjoy landscapes also, and I like doing fine little detail work with a very tiny brush and landscapes are great for that because there's so much detail in nature that you can try to get all those little bits in," she said.

Arietta began the Kids series as a break from those paintings.

The subjects are primarily her close friends, starting with pictures pulled from Instagram and Facebook: Kids partying, hanging out, being young.

She'd see photographs that had a particularly fetching design and work from them.

"I always ask permission from both the model and the photographer, but the truth is that everyone wants to be painted. Everyone's super flattered and thrilled to do it," she said.

In her artist statement, Arietta describes the "Kids" series as "twisted Rockwell, gritty dystopian depiction, of drinking, dancing, and gun toting youth struggling to find modern meaning in the objects and values of our parents and grandparents."

She said some of the imagery, such as an American flag swimsuit, could seem like an affront, but are merely her friends' way of acting patriotic in their own way, and many grapple with handed-down ideas about gender roles and theism.

Her compositions reflect those themes. In one watercolor, a man and several women are drinking at a party. Most are grouped together, while one faces away. She likely was talking to someone in the photo, Arietta said, but she cropped it to make her appear somewhat alienated.

Except for some early pieces in the "Kids" series, the figures are suspended on all-white backgrounds. a reflection of the rootless feeling of youth.

With works on display in three places downtown at the moment, Arietta seems as though she's found her environment.

Bayla Arietta's solo exhibition will be on display in the main gallery at the Zootown Arts Community Center, 235 N. First St. W. A reception will be held from 5:30 p.m. to 8:30 p.m. on Friday, Aug. 14. Normal gallery hours are Monday-Saturday, 11 a.m. to 6 p.m. For more information, go to baylaart.com.

Entertainer: 7 things to do in western Montana

More than 20 years ago, George Ybarra designed a piece of public art for a sculpture class at the University of Montana.

It’s always a contest to see who’s having more fun at the annual Missoula Symphony Orchestra summer concert in Caras Park: the audience or the…

Cam Stuart (Mark Ruffalo) would be good company if he could just dial himself down. But he can’t. So when he offers a neighbor help with carry…

The danger and the rush: Jason Ramos's memoir tells of life as a smokejumper

As a young firefighter, Jason Ramos was drawn to the mystique and skill of smokejumpers, a gruff and taciturn breed of firefighters who didn’t…