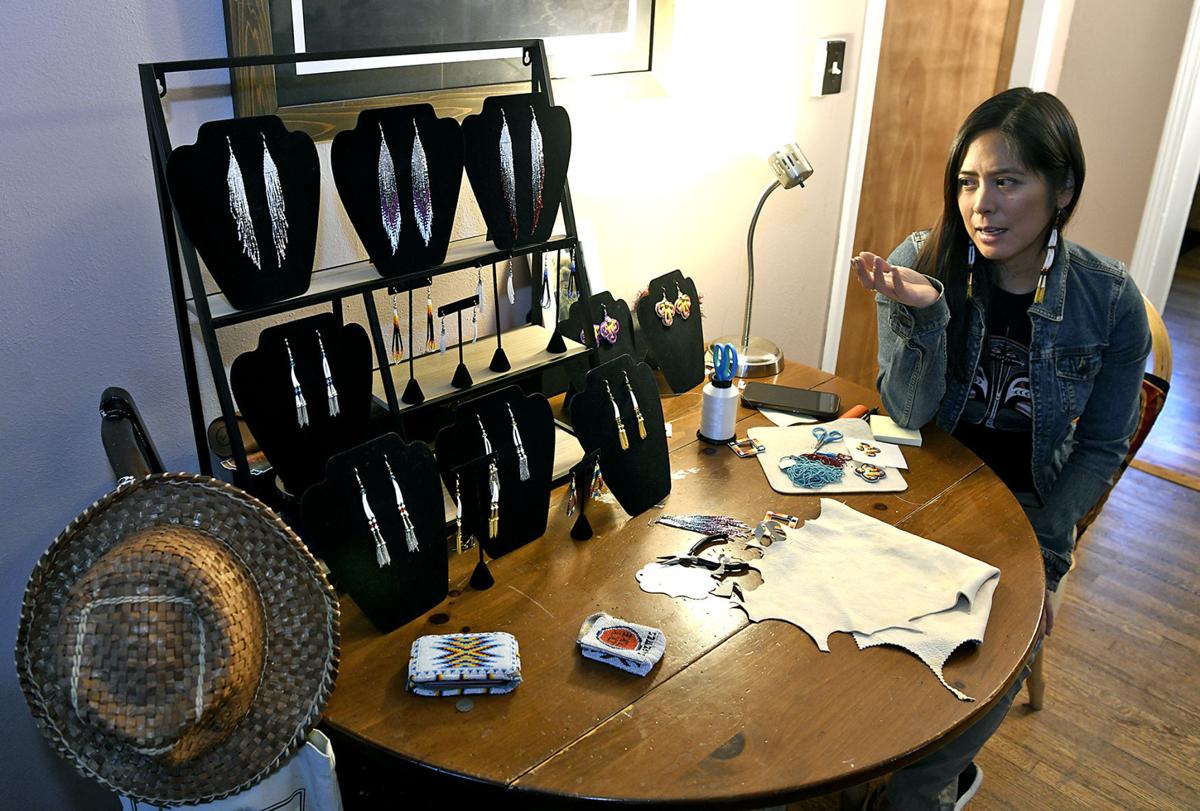 Kristina Lucero talks about some of her jewelry and beadwork that will be featured at the Indigenous Holiday Market in Missoula on Sunday. Lucero, who is from the Tseycum Band of coastal Salish from Vancouver Island, sells her pieces as Dancing Butterfly Designs. 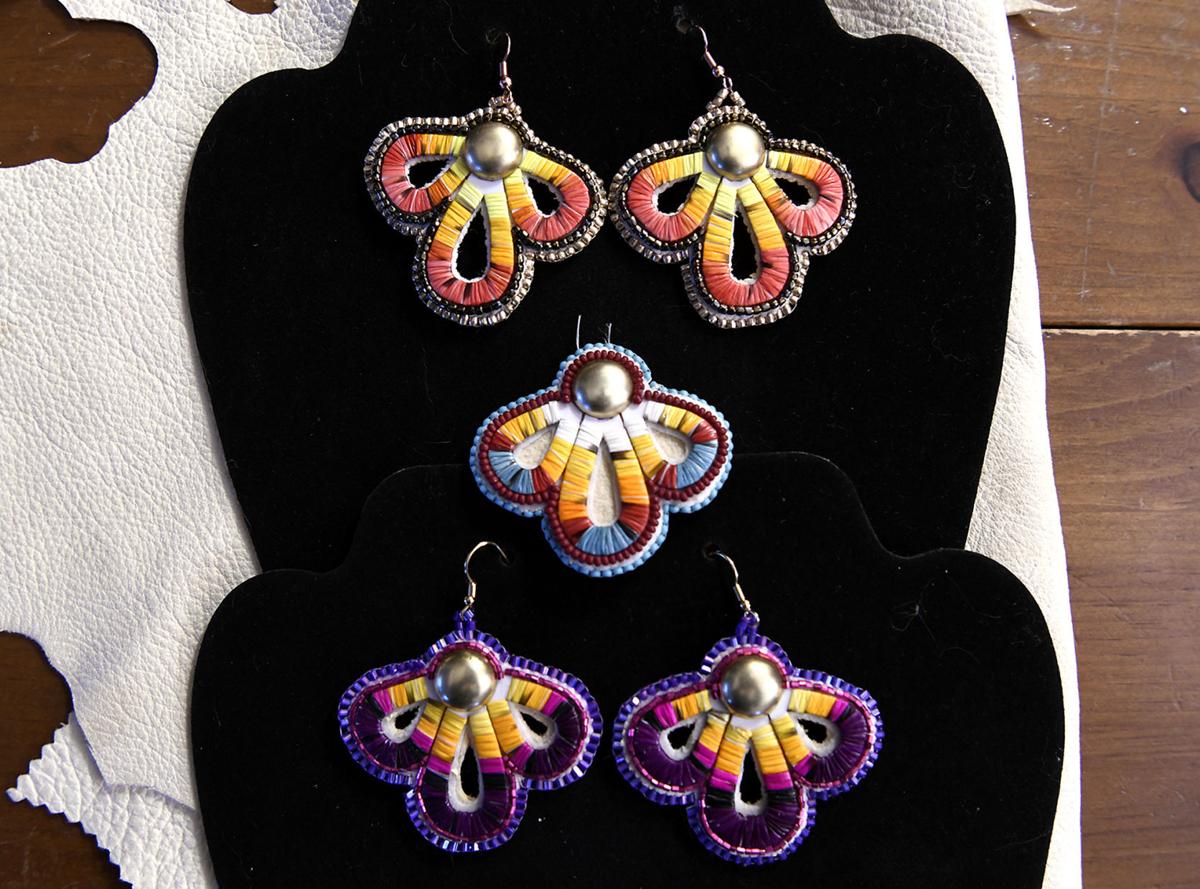 Lucero said she's been working with new color schemes for some of her recent work, such as these earrings made with dyed quills. Born in Hawaii, and raised in the Seattle area, her color palette is informed by the surroundings from different phases of her life. 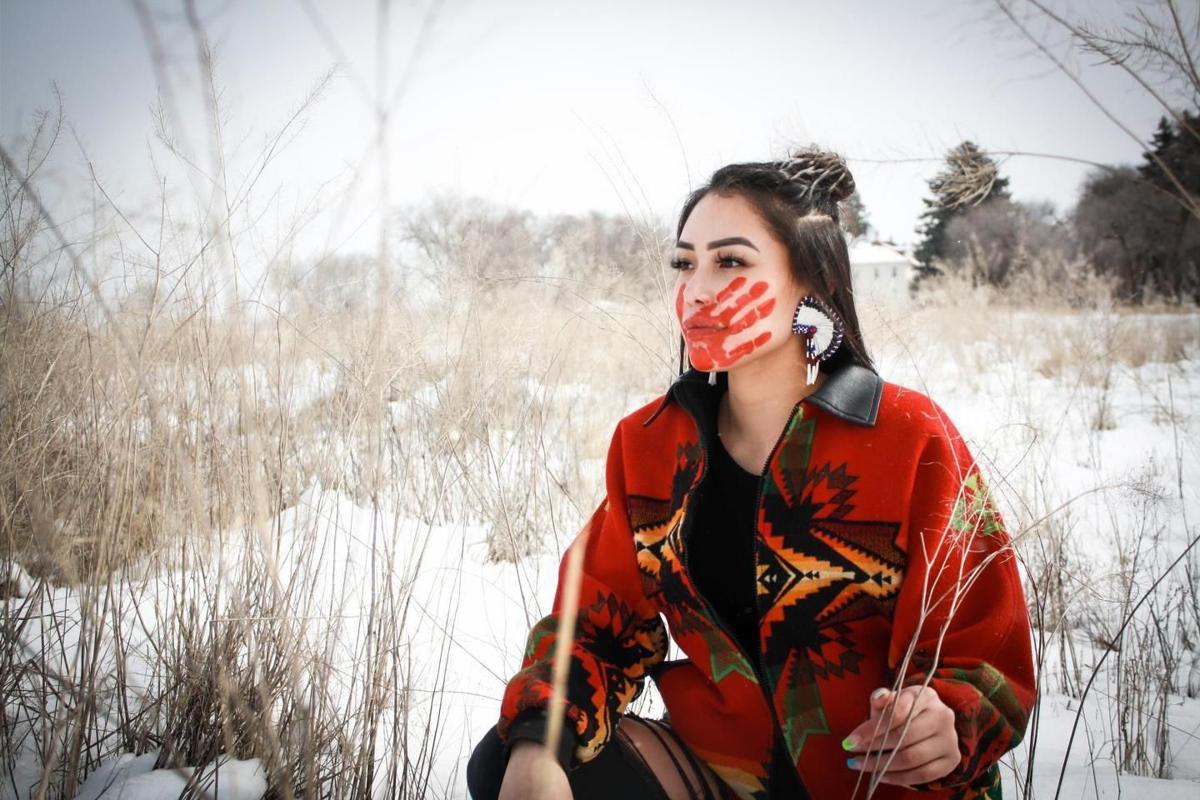 Buckley hopes to photograph women on each of the reservations in the state, and has been posting the images on billboards in cities around Montana. 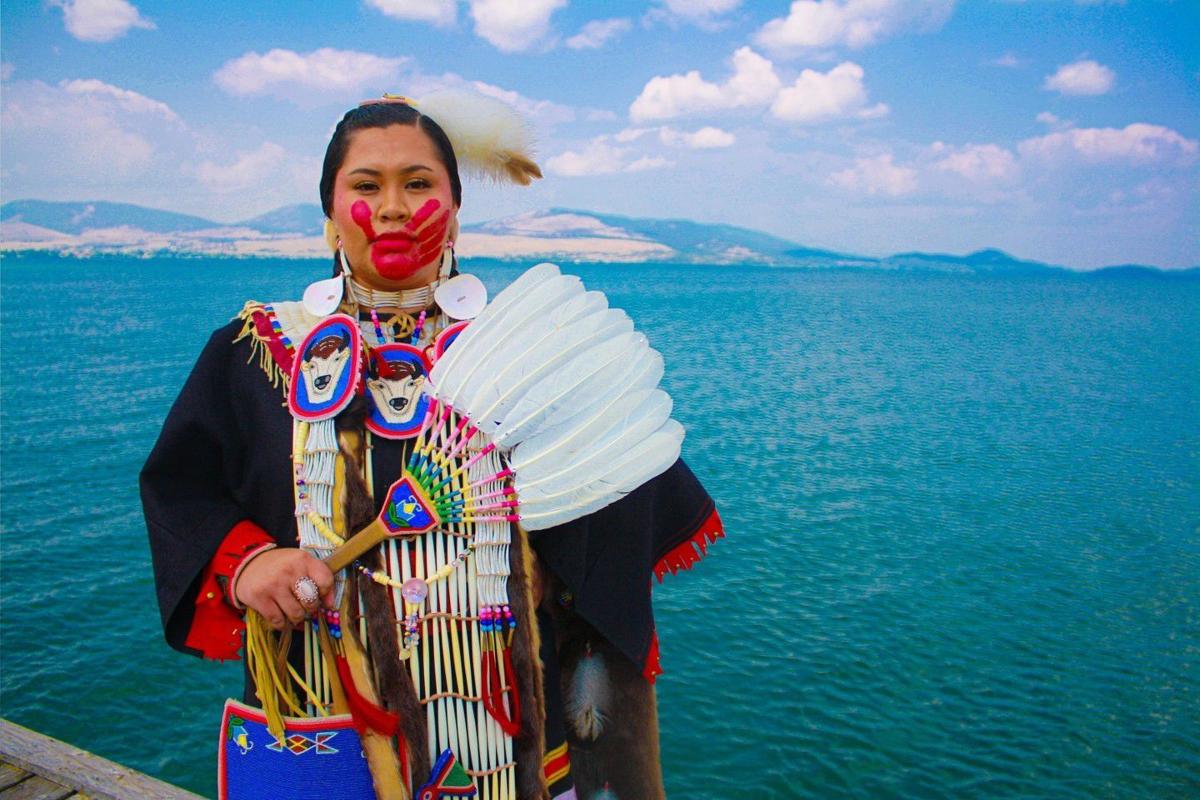 Jen Buckley of Tveraa Photography has been shooting portraits to raise awareness about the crisis of Missing and Murdered Indigenous Women in Montana.

A new Indigenous Holiday Market aims to present all types of artists, from traditional to contemporary and alternative art, in a supportive environment for creators.

The market, which runs 1-4 p.m. Sunday, Dec. 19, at the Missoula Public Library, is a joint effort between the All Nations Health Center and the Jeannette Rankin Peace Center and features 20 artists.

It’s a "much-needed" event that can help build a movement for “our Indigenous voices and sights,” said organizer Andrea “Dre” Castillo, a multicultural Navajo artist.

A board member with the peace center, they (Castillo is two-spirit), pitched the idea for a November event, which grew momentum into a holiday market. In the future, they hope that it can grow, potentially into a seasonal occurrence — spring, summer, fall and winter.

Skye McGinty, the executive director of the health center, said its effort to organize markets had started just before the pandemic and then went on pause. They had envisioned a regular First Friday-type event that could grow into something like the Santa Fe Indian Market and “really give our Indigenous artists a platform to market their work.”

“We have amazing, amazing artists all through western Montana, all through the state, and we really wanted to showcase a lot of their work and get that culture and heritage really circulating in the Missoula community,” she said.

She added that during the pandemic, these connections to culture through traditional art and crafts have never been more important.

Castillo, who supervises Native arts for the fairgrounds, thinks that while Missoula does host Indigenous artists in its venues, they’re typically already established creators. The markets can be a venue for diverse career stages, backgrounds and nations. Artists of all ages who are interested can learn about pricing, support, promotion, and more, which is often a barrier.

And all types of art — from traditional work to contemporary, including creators like Michael Fast Buffalo Horse, a Piikuni artist who makes ledger art with science fiction and queer influencers.

Jen Buckley’s photo series has an urgent goal in mind: raising awareness about the crisis of missing and murdered Indigenous women and people.

It began after she participated in a search for Jermain Charlo, a young woman from Dixon who disappeared after leaving a downtown Missoula bar in the summer of 2018.

Buckley, a part-time photographer for 20 years who has a business called Tveraa Photography, asked herself, “how do I help?” and wondered what she had to offer. She decided her artform was the path. She began looking for Indigenous women who wanted to be in portraits with the iconic red handprint on their faces.

While she wants the photographs to be beautiful, “there’s real people missing in Montana that those images are representing,” she said, and she wants everyone to “not lose sight of this.” The goal is to raise awareness about the issue in Montana, promote systemic change, and help families when their loved one goes missing, she said.

Buckley grew up in Havre and is enrolled in the Chippewa Cree Tribe and has family on the nearby Rocky Boy’s Indian Reservation. She has set a long-term goal of visiting each reservation in the state to shoot portraits for the series. Thus far, she’s shot pictures here in Missoula and in Polson. Posting a call for participants on Facebook yielded a strong amount of interest, and she’s open to emails from interested folks around the state.

She’s selling prints, either framed or unframed, and poster-sized ones, and using the money to post them on billboards around Montana. Lamar Advertising has charged her only printing costs, enabling her to display the photos and text on billboards in Billings, Great Falls, Havre, Missoula and Polson.

In addition to the market, her photos are on display through the end of the month at Float Missoula on the Hip Strip. (The float tank business is open to the public.)

She added that the issue is not a fashion statement, and it’s not a political issue either. “This is a health epidemic,” she said, and “the farthest thing from politics.”

“I can’t imagine it being my daughter,” she said, and hopes that people would search “like it was their own kid.”

She comes from the Tseycum band, a Coastal Salish tribe from Vancouver Island. Born in Hawaii and raised in the Seattle area, she came to Montana because her mother had relatives here, and that’s when she learned beadwork (including time with a Navajo master) and became involved in powwows.

It wasn’t until three years ago, however, that a friend encouraged her to also try selling at craft fairs.

“It’s important to me, and it's part of who I am,” she said. And it “definitely brings me a good balance,” as she has a demanding day job.

For the upcoming market, Lucero has been making earrings with beaded fringes, with a brick-stitch at the top, and ones with long, narrow dentalium shells, which are found up and down the coast from Alaska to California, she said. They were a form of currency that’s become more popular in beading.

She draws her color patterns from her surroundings — winter-sunset earrings with beads, or quill ones that are rooted in Hawaii’s bright palette. The quills are tricky to work with, naturally, from gathering, dying and weaving.

With the amount of effort required for her pieces, she wants to imbue them with “good vibes” and “good energy,” so that it can become part of someone’s everyday life, including celebrations or ceremonies. Wearing them can make one “feel a confidence in the future,” she said.

Seeing her work out in the world, too, is a “positive influence from my cultural perspective in my community” and counteracts the "invisibility that can occur."

She also likes buying curved earrings from stores and weaving quills around them, a way of “indigenizing the world around me.”

Selling at markets, people can learn about the background and meaning, an alternative to the Internet where non-Natives sell crafts and use designs without credit.

“Just out of respect, especially when you’re talking about cultural identity and cultural perspectives, it’s good to get … background about what influences them," she said.

She loves this market because “they’re making sure the artist is actually getting credit for this, and that other people aren’t getting the benefit” of Indigenous culture, she said.

In their model, they don’t charge table fees to the artists and provide gas cards to ensure that they can participate, particularly if they’re coming from out of town. Golden Yolk Griddle stepped forward to pay for gas cards for those artists.

“I want to be able to build that bridge with that Indigenous community surrounding us, to come back to Missoula,” Castillo said.

Lowering the financial barriers also can make it an opportunity to help build careers, “learn the basics of what it means to start promoting their work, and give them the awareness that Missoula does care about them, that they do see them, and they’re willing to support them.”

The first market in November was successful and drew about 300 people for its 11 artists, all in the comparatively tight quarters in the Peace Center’s meeting room. This one will have far more space on the Missoula Public Library’s fourth floor.

“The public library's also interested in all events being free and accessible — they're going to be allowing us to use their tables and chairs,” said Jacqueline Flewellen, the peace center’s executive director. “There's no room fee, they will allow artists to sprawl into places as needed.”

This model is nonprofit-driven, and if people “want to help us continue to grow this program and Dre’s vision and you know the dream of All Nations having a regular market, we could use their financial support,” Flewellen said.

McGinty, of the health center, said that the “sustainability part is the trickiest part.” The gas cards help for artists who are traveling from the Flathead or Blackfeet reservations, for instance.

“If there are any ways that we could get support … or volunteers to help do set-up and take-down at these events,” she said, “every hand counts.”

Castillo hopes that it can be a community organization-driven effort that can build bridges to alliance groups throughout Montana and continue for each season.

The Indigenous Holiday Art Market runs from 1-4 p.m. Sunday, Dec. 19, on the fourth floor of the Missoula Public Library. Parking is free. Masks are highly recommended.

Photographer Jen Buckley grew up in Havre and is an enrolled member of the Chippewa Cree Tribe of the Rocky Boy's Reservation.

Here’s a quick guide to some upcoming arts and cultural events around Missoula in the coming week.

One of the largest art and craft markets in town is returning to the Adams Center on the University of Montana campus from 11 a.m.-6 p.m. on Sunday, Dec. 12.

Santana to perform at University of Montana in April

Santana last played a show in Missoula on Aug. 25, 1998, in Caras Park, and the upcoming Garden City date is his only tour stop in Montana.

'Nutcracker' back for live audiences this weekend in Missoula

The Garden City Ballet’s “Nutcracker,” a holiday tradition for 37 years, has returned to the Dennison Theatre at the University of Montana for sold-out weekend performances.

A fundraiser for environmental groups that boasts gorgeous images shot around the globe by some of the best photographers around is based right here in Missoula.

Kristina Lucero talks about some of her jewelry and beadwork that will be featured at the Indigenous Holiday Market in Missoula on Sunday. Lucero, who is from the Tseycum Band of coastal Salish from Vancouver Island, sells her pieces as Dancing Butterfly Designs.

Lucero said she's been working with new color schemes for some of her recent work, such as these earrings made with dyed quills. Born in Hawaii, and raised in the Seattle area, her color palette is informed by the surroundings from different phases of her life.

Buckley hopes to photograph women on each of the reservations in the state, and has been posting the images on billboards in cities around Montana.

Jen Buckley of Tveraa Photography has been shooting portraits to raise awareness about the crisis of Missing and Murdered Indigenous Women in Montana.