Indigenous stories, music and visuals come together in artist's new show
0 Comments
Share this
{{featured_button_text}}
1 of 3 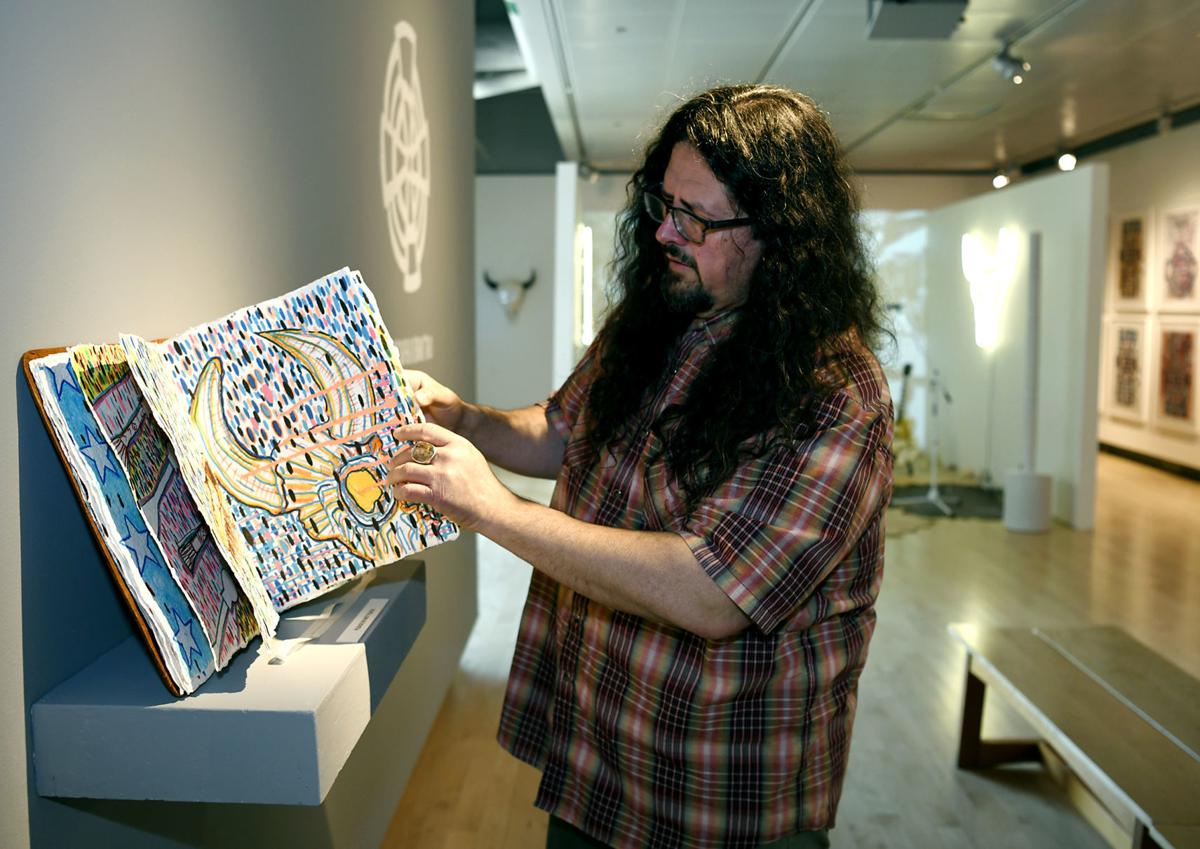 John Hitchcock's exhibition at the Missoula Art Museum combines all of his creative projects, art, music, installation, video and oral storytelling, into one gallery show. Hitchcock said all of those creative endeavors are about telling stories, many from his Kiowa and Comanche heritage. 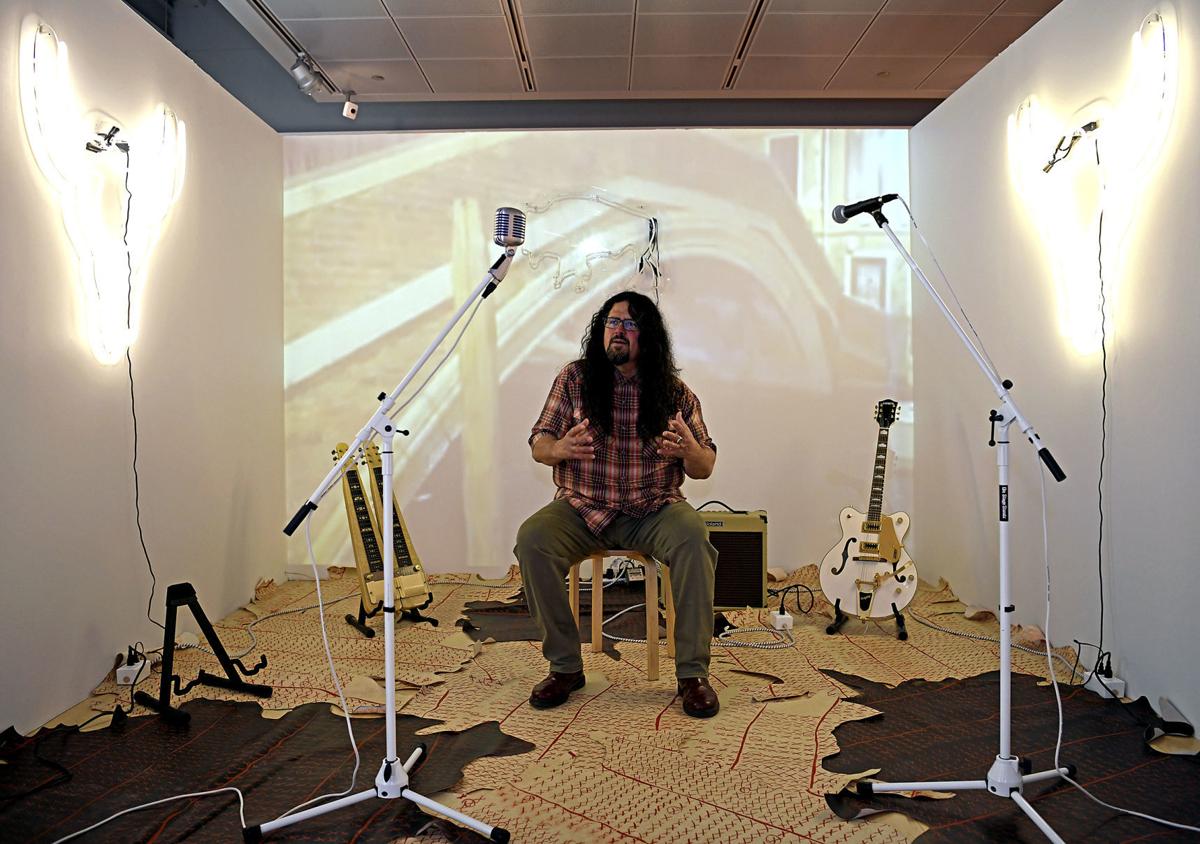 Hitchcock sits in the performance space he designed within the gallery where his band will play on Friday during Art Swing at MAM. He created neon installations and video projections for the space. 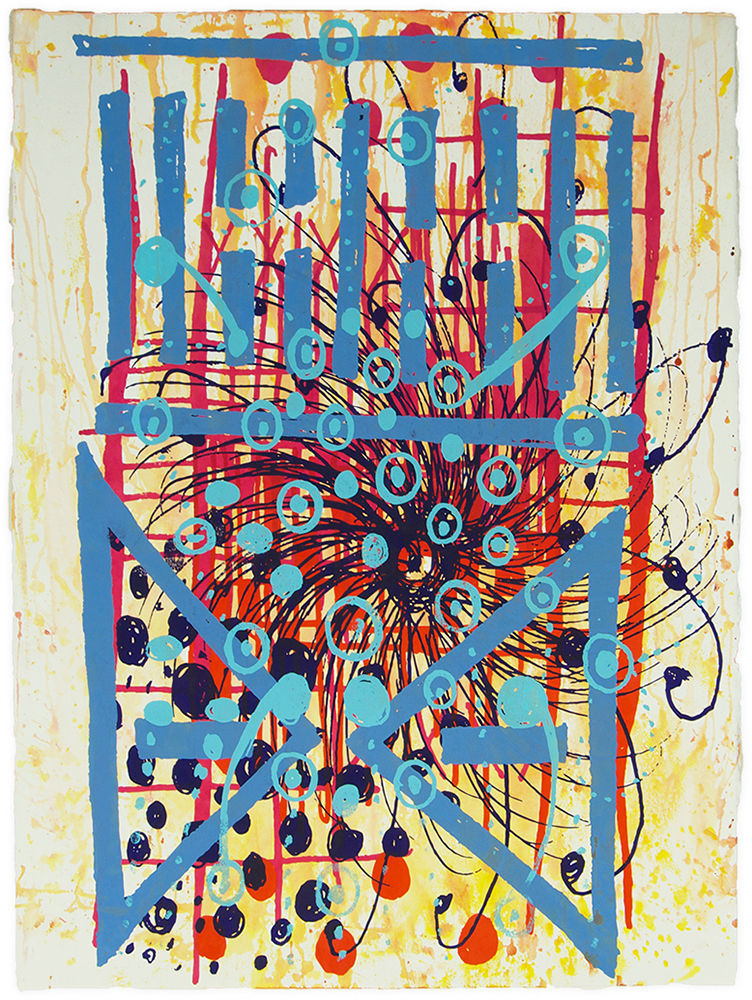 Two years ago, John Hitchcock drew a rough sketch on a napkin for a show that would bring all of his careers and creative projects together: art, music, installation, video, oral storytelling.

The stage literally is now set in a gallery at the Missoula Art Museum.

For "Bury the Hatchet/Prayer for My P’ah-Be," the Madison, Wisconsin, artist designed a performance space for his band, Nate Meng and the Stolen Sea, who are coming to town this weekend.

In another corner, a turntable can cue up a new double album by the band, as they back recordings of his late cousin and grandfather telling Kiowa and Comanche stories.

His vibrant abstract prints, based on designs from traditional regalia and clothing, line an entire wall. He came up with flashing neon lights and video projections. He made flags, too, and designed wall text based on the stories.

"This is the first time I finally have brought my music and everything together. It's been a huge dream of mine to finally play inside the actual venue that I'm making my art," he said.

"To me it's about stories," he said. Those of his family, preserved in their voices and the imaginative thinking that comes with that. "I really love to hear stories from my elders and cousins, so that's one of the things I was always recording," he said.

Hitchcock, an art professor and associate dean at the University of Madison, Wisconsin, grew up in Oklahoma. He has Kiowa and Comanche heritage on one side of his family, and German and Dutch on his father's side.

His grandmother, a beadwork artist, taught him to draw, and he's grown older he said he's always studied the art he saw in family homes and contrasted it with other indigenous art he'd come across in museums.

About two years ago, he had an artist residency at the Buffalo Bill Center of the West in Wyoming, where he combed through the archives, sketching beadwork patterns. During a residency here in Missoula, he transformed them into more than 100 prints at the MATRIX Press at the University of Montana, and displayed them as part of a group exhibition at the MAM.

The layers of markings and patterns aren't specific in his work — medicine wheels, hourglasses, designs from the tops of shoes or decorative patterns of dots and lines.

"My intent is to have them about family and lineage and that relationship to the things that I saw, like the medicine wheel, and the importance those things in our culture," he said.

Hitchcock grew up listening to both metal (Slayer, Tool) and country — he went to graduate school for art at Texas Tech in Lubbock, Texas, specifically because that's where visual artist/musician Terry Allen was. He's played music since he was young, in both metal and and rock groups, and now with Nate Meng, a group that has improvisational chamber-folk leanings.

They wrote and improvised music to accompany recordings of stories and samples of traditional songs. In the 1930s, Hitchock's grandfather, Johnny Reid, recorded a Comanche elder named Tahen talking about life at the turn of the century. Another main source was his cousin, Jason Cutnose, also Kiowa, telling stories: the massacre at Cutthroat Gap; a famed meteor shower in 1883 that was recorded on Kiowa buffalo calendars; and the story of Lone Wolf, a Kiowa chief who went to war with the Texas Rangers. (Wall text in the gallery includes sections of the stories.)

Elsewhere on the record, they contrast Kiowa and Comanche hymnals with call-and-response elements with "taps." He said there's a "military" overtone, but the album is also a memorial to Cutnose and his relatives who've passed away. The "P’ah-Be" in the title means "brother," and refers to Cutnose.

For the installation, they were able to borrow a bugle from the Historical Museum at Fort Missoula to hang on the wall. The image is important not just because of "taps," but because of Set'Tainte, the last Kiowa leader, who would play a bugle when heading into battle, "to say that we have the ethic and the belief and this is ours now and we're going to use it to sing our songs," Hitchcock said.

On Friday, they'll play two sets: One at 6 p.m. that uses these stories, and another at 7:30 p.m. that's with the band's other material. (On Saturday, they'll play another set at the the ZACC Below with live screenprinting.)

The performance area he designed has white neon signs: a outline of buffalo in profile, and two of a buffalo skull. They were manufactured by Let There Be Neon of New York City. He likes the visual reference to Western-type bar signs.

"It's that enticement, and I love that enticement that neon has, and what neon says. It's artificial. It has an ability to make you think, but what are you thinking about?" he said. His signs also represent Native culture. "What's being hidden? What is being taken? And how is the land changing because of the unnaturalness of the material?" he said.

He envisions moving the entire project forward after another residency at the Buffalo Bill Center. The album could have an opera phase or a metal phase. He could take the abstract printmaking into neon and video, and continue merging styles of communication.

"I love that idea of juxtaposing old technology that's coming back to new technology and the mixture of that. How we're in a stage of trying to figure it all out, or people are trying to manipulate it," he said.

The band will play again on Saturday, June 1, at the Zootown Arts Community Center basement with Oh Rose, Hannah Edlen and Arrowleaf. Doors open at 7:30 p.m. There will be live screenprinting.

Kim Kardashian is in a legal tussle over new brand name

'Shape of Things': Indigenous artists team up with museum, press for new work

To take a look at how indigenous artists in the United States are approaching their work, the Missoula Art Museum didn't put out an open call.

Indigenous printmaker John Hitchcock on beadwork, versatility of the medium

Some of John Hitchcock's latest screenprints started, in a way, when he was very young.

Art for art's sake: A Missoula fashion shoot based on a prophetic novel

Photographs of models, either in a burned-out forest or on site at the Historical Museum at Fort Missoula, in custom clothes based on a new no…

POLSON — When Marita Growing Thunder graduated from high school here in 2017, she didn’t wear a gown. She made her dress.

To depict the ills of modern society, Jason Clark turns to the past.

John Hitchcock's exhibition at the Missoula Art Museum combines all of his creative projects, art, music, installation, video and oral storytelling, into one gallery show. Hitchcock said all of those creative endeavors are about telling stories, many from his Kiowa and Comanche heritage.

Hitchcock sits in the performance space he designed within the gallery where his band will play on Friday during Art Swing at MAM. He created neon installations and video projections for the space.