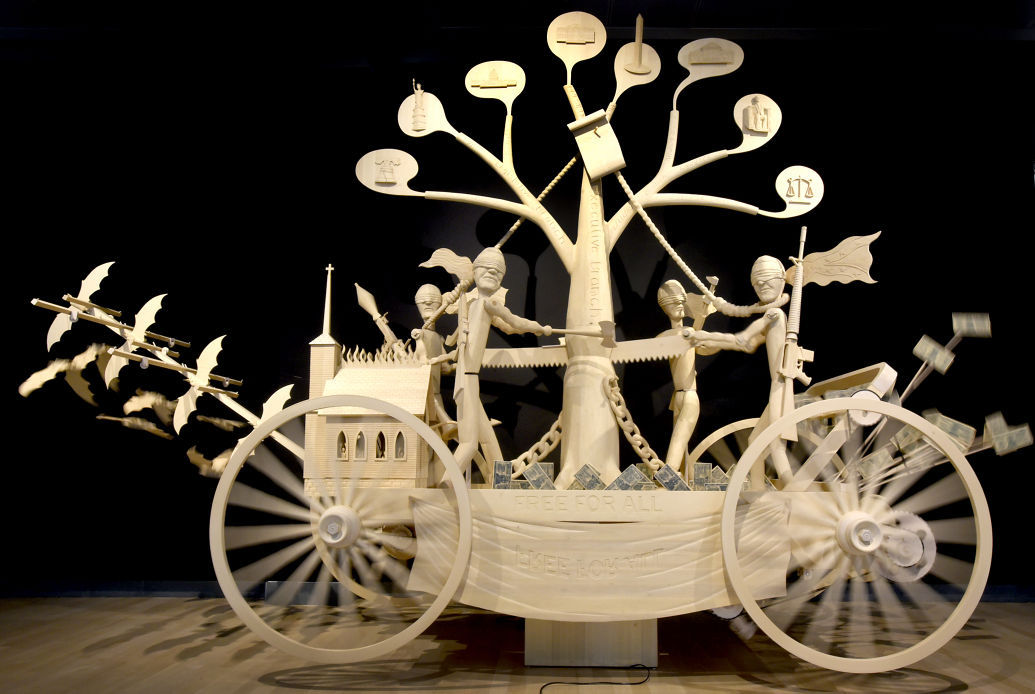 John Buck’s massive kinetic sculptures like “State of the Union,” are on display at the Missoula Art Museum. 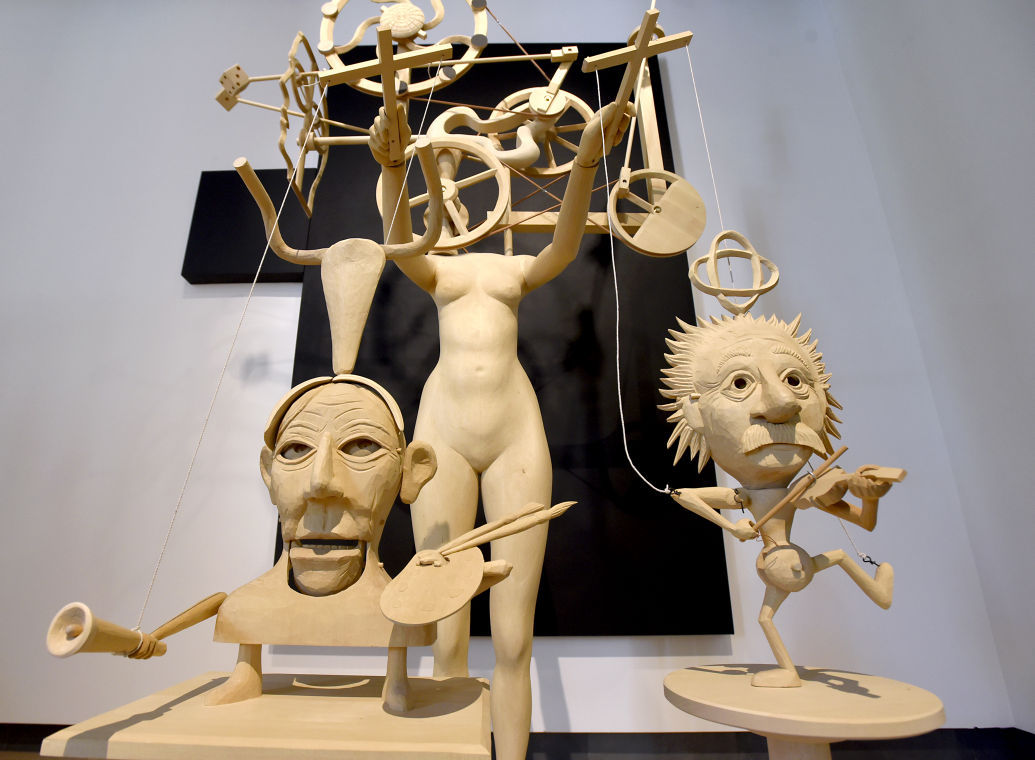 “The Muse” has visual references to Picasso and Einstein. 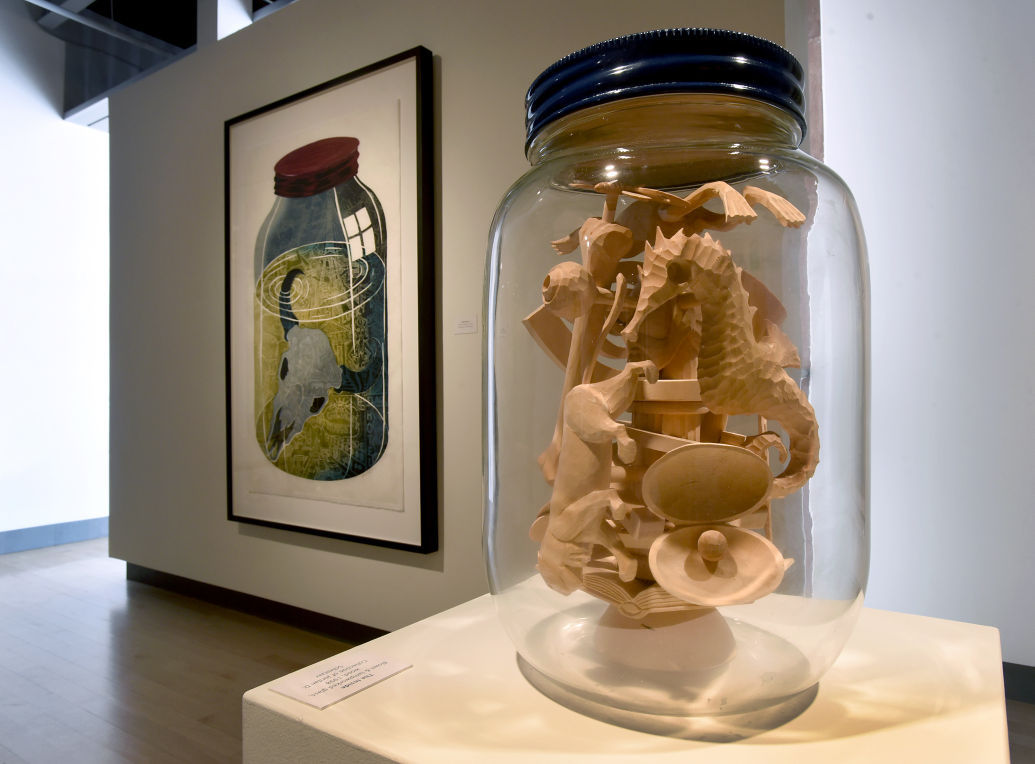 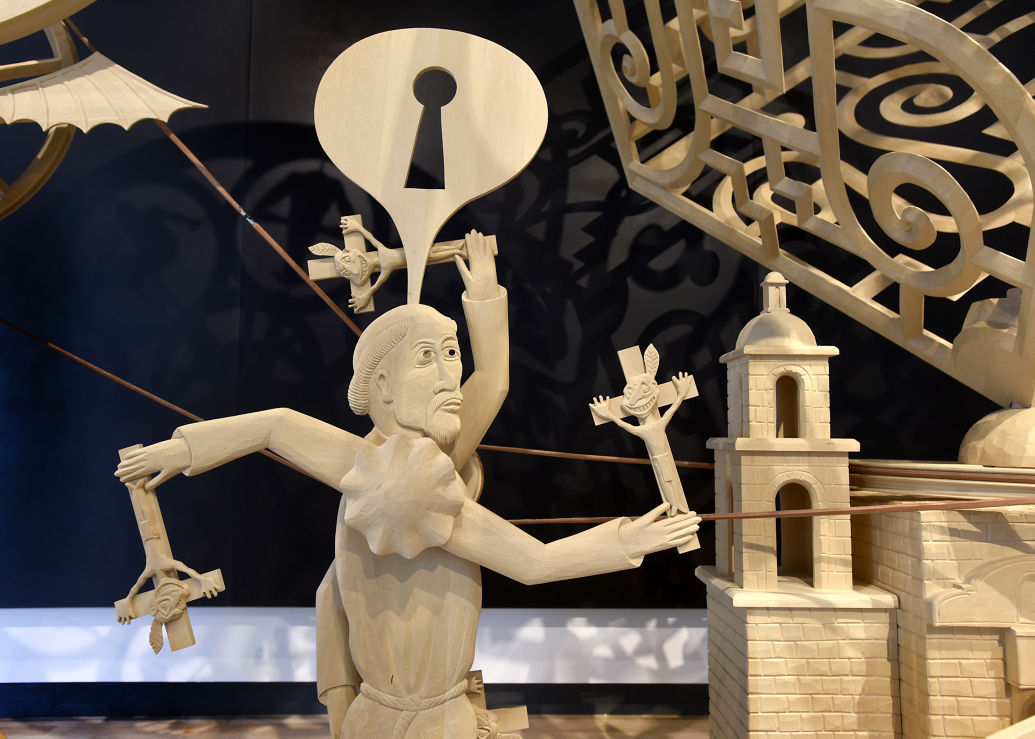 A detail from "Cat's Cradle."

John Buck’s massive kinetic sculptures like “State of the Union,” are on display at the Missoula Art Museum.

“The Muse” has visual references to Picasso and Einstein.

A detail from "Cat's Cradle."

The oar men row and a globe spins in his works, some measuring 24 feet long in the Missoula Art Museum's largest gallery, their repetitive motions powered by a DC motor and systems of old-fashioned leather belts.

Buck began adding moving elements to his sculptures about 10 years ago.

"I always felt like when I was making these big things that I had a sense of movement in the design. You know, it was sort of like a drawing. You have a certain kind of gestural quality," he said last week during the installation of his exhibition "Free for All."

"I came to the conclusion that looking at a piece of sculpture is not the same as watching it. When you look at it, you see those implications of movement, but it doesn't move. And so there are no surprises. It's just kind of a pleasurable experience. I thought that it would be interesting to add movement to it because it makes more of a story."

With their myriad elements, the hard-carved jelutong sculptures imply more than a simple narrative. His imagery draws on myths, historical figures, contemporary events and social issues, and artists like Pablo Picasso, Frida Kahlo and Diego Rivera.

In one sculpture, "Cat's Cradle," Buck arranged figures on a long rowboat. The head of the rear oar man is a giant spinning globe, topped by a merry-go-round with the heads of explorers such as Ponce de Leon and Magellan.

At the front of the boat, wooden tears spill out from a virgin's eye sockets in an unending loop. The front oar man's shoulders are topped with small bat wings, his head a giant spinning wheel decorated with medieval monsters.

Some are frightening and others merely comical, such as a male figure with a foot that's larger than his body.

"He is excellent, because he just lays around in the shade of his own foot," Buck said.

Buck pointed to another visual metaphor embedded in the piece, but quickly added a caveat.

"Now I don't know if you want to print that," he said. "I'm partial to people's interpretations."

"It's very important to me that you leave it as open-ended as possible, so they don't just come in and read it like a storybook. Because when that happens, you kill it. You just turn it into this real predictable narrative."

Of another sculpture, "State of the Union," he said his intentions are easy to discern, with images and lettering that reference a dysfunctional government. "You don't have to agree with me, but you might want to watch it anyway."

MAM curator Brandon Reintjes said Buck's work is in high demand, as he's "making these pieces that directly relate to and comment on everything that's happening socially and culturally in our world right now."

"He's both claimed as a Montana artist and seen as one of the greatest living sculptors in America at this time. We're very fortunate to have that access to someone working at that caliber," he said.

The wood tones at the MAM exhibition are balanced by Buck's large-scale color prints, which employ similar iconography in a bright palette, and also boast layers of imagery in their backgrounds.

He has a novel process to printmaking, which Reintjes said is "unique to him as an artist."

Images are cut and engraved from individual blocks of wood that are separately inked and placed into a background block. He then lays a piece of paper on the top, which is rubbed from behind to create the image. (To see an example, go to the hallway downstairs near the classrooms, where a print and block are hung side by side.)

Reintjes said Buck developed the technique based on stone rubbings, and adapted it to fit the smaller wood sculptures he was making at the time.

He said Buck doesn't think of himself as a printmaker, which is odd "because his prints are so prevalent and renowned."

The scale is notable as well: Some of the prints in the MAM are 77 to 88 inches tall, "which is huge for a woodblock print," Reintjes said.

Buck's work, which also includes bronzes and glass work, has been shown and collected at prestigious institutions like the Art Institute of Chicago, the Museums of Modern Art in New York and San Francisco, and the Seattle Art Museum.

The Iowa native holds a B.A. and an M.A. in art, and the practice of making things goes back in his family.

Buck's grandfather was a cabinet maker, and when he was younger he built kit houses and barns on farms in the Dakotas.

Buck's father wanted to be an artist, but a hernia operation during the Depression forced him to give up that dream and work construction, eventually running his own business.

The kinetic elements are rooted in a childhood memory of one of his father's projects: a homemade shooting gallery, built from old farm equipment and spare parts.

"The tent was an old cemetery funeral tent, which folded out and had an awning in front of it," he said.

There was a rail, where kids could step up and take their try with a slingshot at clay birds.

"You'd get five ball bearings, if you could shoot five of those clay birds, you'd get the big prize," he said.

"To me, it was a wonderful thing because I remember all these kids coming up and were really thrilled about this contraption going in there. And you look at it, and stand back and watch it, and here they were shooting into a funeral tent. It had a macabre kind of feeling to it, and I just never forgot it. It sort of inspired me to make something mechanical like that," he said.

Even as the sculptures whir away nearby, Buck insists he's not a mechanic or an engineer.

The design of the sculptures is trial-and-error, he said, "a what-if" conversation he has as he combines different elements. Sometimes ideas are abandoned if the mechanics won't work out.

"My studio is filled with rejects. Tons and tons of old odd things that I've carved and left on the walls," he said.

Helping him assemble the sculptures – at the studio and at the MAM – was Guy Klass, with whom he's worked for decades.

The large pieces can take a year or longer, with Klass busy on the mechanics in Bozeman, whether Beck is there or at his other home studio on the Big Island of Hawaii.

"Cat's Cradle" has upward of 50 different pieces that arrived packed at the MAM in crates.

The sculpture pieces had to be laid out individually on blankets, and then Buck and Klass assembled them from memory.

Reintjes described the intricacy as "mind-boggling."

Buck is unsure how many pieces there are in a sculpture like "Cat's Cradle."

"I've never counted them. If I had, I would not have done them," he said with a laugh.

Watch a video of his work in motion

Headwaters Dance Company comes to a close with 'Beginnings and Endings'

A nationally recorded jazz pianist will make a solo concert in Missoula next week.

Concert features jazz tunes inspired by Hugo, along with his poems

An album of music born on a western Montana road trip is making a return stop in Missoula.

"John Buck: Free for All," will be on display at the Missoula Art Museum through March 12.