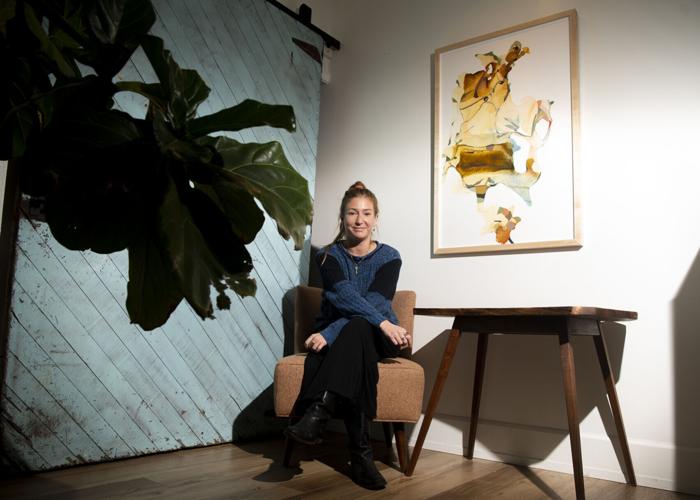 Madeline Mikolon, a local artist, poses next to her pieces on display at Smithblack Furniture in Missoula on Thursday. Mikolon's work will be on display through the end of December at Smithblack. 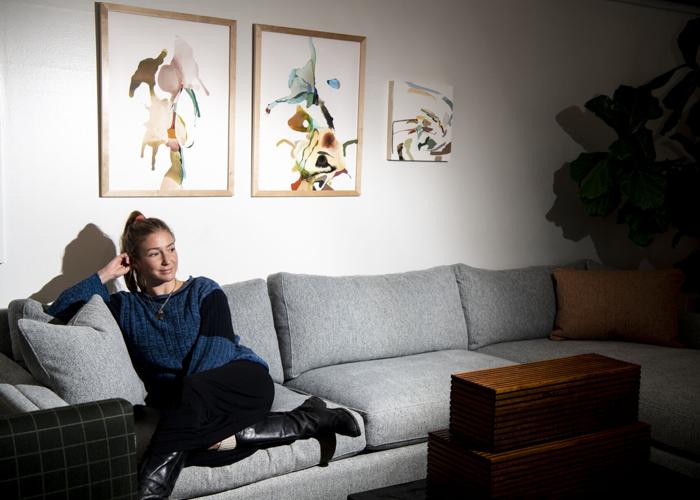 If a brushstroke can’t be erased or covered, then each one that comes after it is a complement, a readjustment, a response.

Madeline Mikolon, a Missoula artist, builds her abstract paintings with an organic palette, move by move, on the unforgiving medium of paper.

Madeline Mikolon’s show is on view through December at Smithblack Furniture. Check the store’s website for hours during the holiday week.

After she moved here, her paintings referenced the landscape in an indirect way, with titles like “Ravine.” The connection is looser now and she’d rather people read the work as they like.

“I really like that idea of suggestion, second-guessing, being caught by something but not being able to put your finger on why,” she said. “I think they take on their own personalities.”

They have enough visual information they can “change over time, and with different viewings,” she said.

Mikolon is showing new work through the end of December at Smithblack Furniture, a high-end boutique, on the 2000 block of South Higgins Avenue.

Nora Van Stelten, the co-owner of the store, studied art in college and presents solo exhibitions when the fit is right. People can see the work in a home-like environment. From a design point of view, she thinks it would be odd to have a shop with well-crafted furniture on the floor and mass-produced “fake” art on the walls.

The building blocks of Mikolon’s work are pools of watery organic color, overlapping and accenting each other. Threading their borders, accenting and intersecting are tightly rendered lines. Some waver and push ahead seemingly with a will of their own, like a river drawn on a map.

Mikolon finished the last two years of high school at a boarding school that had formal art classes, and then enrolled in the Pratt Institute in Brooklyn. The first year of foundation courses were rigorous, and she began shifting toward abstraction quickly. After living in New York for a long time, she moved to Missoula.

In college, she was influenced by the Bauhaus artists, with exhibitions at the Museum of Modern Art. Ernesto Caivano, an artist from Spain who was based in New York, enthralled her. She follows an Australian artist, Adam Lee, closely, she said. Things she sees in museums or stumbles upon while traveling might inspire her.

“These lifelong, ongoing conversations surrounding art have made more of an impact for me,” she said.

Paper has many virtues but one of its qualities is transformative: Once a mark is made, it can’t be erased, covered and obfuscated. Instead, she approaches the composition in an incremental fashion: Marks are made, then adjustments. Additions but not replacements, a problem-solving process.

“You can always change it by adding more marks, changing the mark, making it bigger. I like working with what I have and building on it,” she said.

The pieces start with a couple of marks in acrylic, ink, gesso, mixed inks, watercolor wash.

The umber, pale cyan and translucent grays pool and marble together in some pieces, almost resembling macro photographs. The water will stay within bounding lines that she’s laid down in advance. In a few of the works, straight-edge lines, complete or implied, contrast with the more organic shapes.

Regardless, they leave much to the viewer.

“I am interested in associations that happen, whether it be a space or a landscape or an object, or even feelings, something that happened, a memory,” she said.

“I am still interested in landscape and organic form in general — rocks, botanicals, light," she said. Natural shapes tend to imply a lot to the viewer, too.

“If you look at an organic form, like let’s say a rock, up close, they tend to start mimicking landscapes,” she said.

She’s noticed her palette shifts with the seasons, and this work, made mostly during the spring and the summer, is heavy on yellows and greens, in a way that feels directly tied to the natural world.

A piece called “Bramble/Reeds” hangs over a bed. A wide horizontal piece, she thought it was somewhat “explosive,” although the effect isn’t expressively violent like the brushstrokes typical of abstract expressionist painting. Darker shades are spaced throughout, but they’re not true black. She loves dark browns or other tones and the effect they can have.

“Adding even a violet or a blue can really change its personality,” she said.

“There’s definitely this balance when making these sorts of things,” she said. "Things can get too overwhelming and you balance it out."

A work in progress can “explode again, and you rein it in,” she said. “It’s kind of this conversation between the two.”

Missoulian photographers' photos of the week

Our favorite photos of the week from October 7 to November 13.

“Focus on the Figure: The Pattee Canyon Ladies Salon: 1989-2022” is on view at the Montana Museum of Art and Culture’s Paxson and Meloy galleries through Jan. 9.

Things to do: Winter dance, Monte's book, 'The Last Waltz'

Here’s a quick guide to some upcoming arts and cultural events happening in the coming week.

“The Art Monte Dolack: Vision, Myth, Mystery” includes many paintings, both self-generated and commissioned, that viewers might not have seen before, even if they’re hard-core fans of his posters.

Bare Bait’s founder and director Joy French says this is her first attempt at a Christmas show since she started the group in 2011.

Moves in a Minute: “The Fabelmans”

Madeline Mikolon, a local artist, poses next to her pieces on display at Smithblack Furniture in Missoula on Thursday. Mikolon's work will be on display through the end of December at Smithblack.