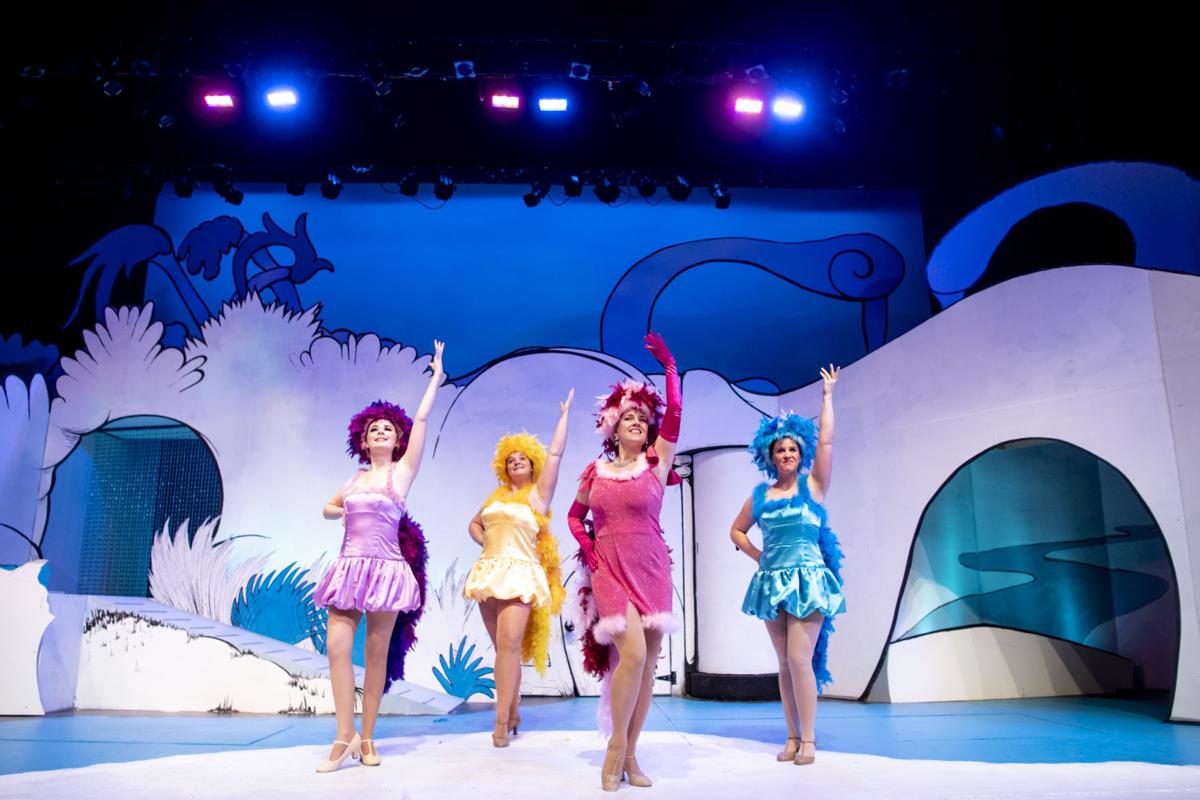 From left: Linnea Connery, Melissa Briner, Colleen Rosbarsky and Ellen McKenzie rehearse recently for an upcoming showing of "Seussical" at the Missoula Community Theatre Center for the Performing Arts. The show runs Dec. 6-22. 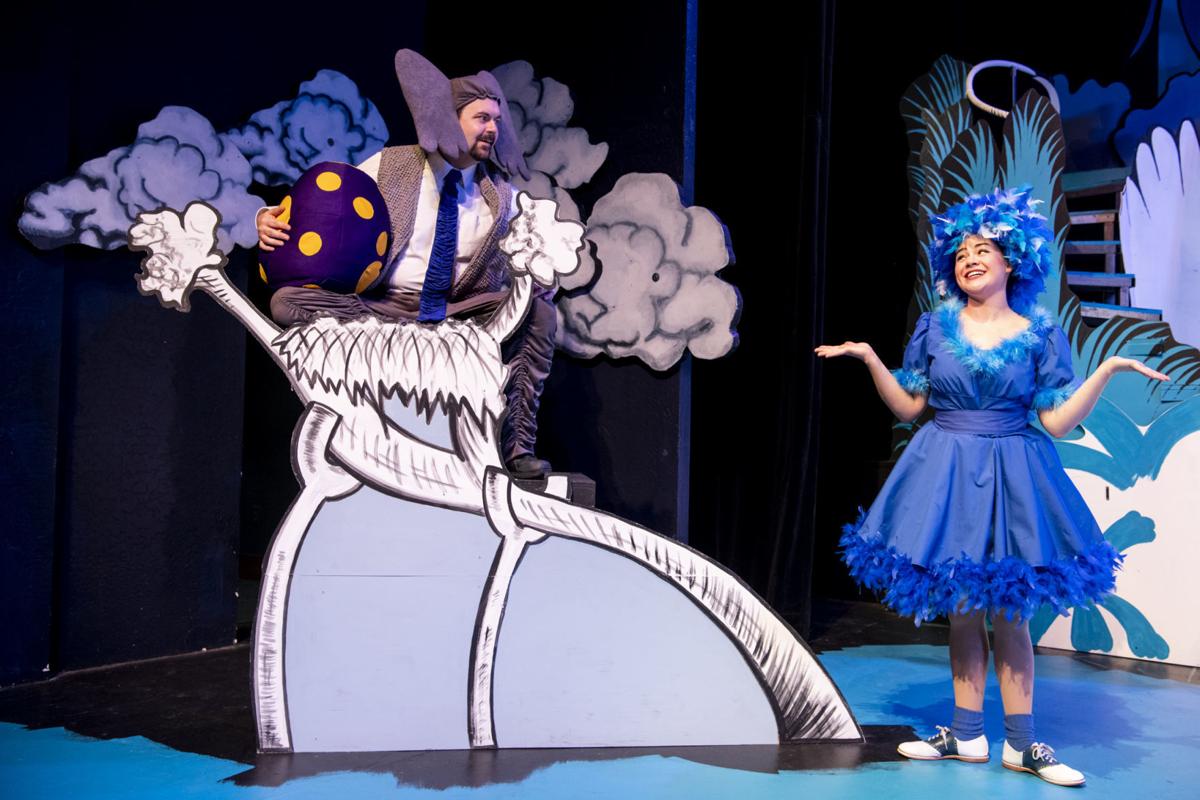 From left: Linnea Connery, Melissa Briner, Colleen Rosbarsky and Ellen McKenzie rehearse recently for an upcoming showing of "Seussical" at the Missoula Community Theatre Center for the Performing Arts. The show runs Dec. 6-22.

Missoula Community Theatre is rhyming its way into the hearts and minds of kids and adults alike with its production of "Seussical."

The musical, running Dec. 6-22 at the MCT Center for the Performing Arts, weaves together the stories of several famous characters from Dr. Seuss, including Horton the Elephant, Mayzie LaBird, Gertrude McFuzz, Yertle the Turtle, the Sour Kangaroo and more.

“Seussical is one of my favorite shows,” said director Andy Meyers. “It’s a really cool sort of crossroads story of all the characters.”

The plot follows the journey of helpful Horton and lonely Who child Jojo, narrated by maybe Dr. Seuss’ most memorable character, the Cat in the Hat.

Played by actor Jon Bell, who’s been performing with MCT since 2015, the Cat in the Hat also takes on smaller roles throughout.

“Jon’s audition just blew me away,” Meyers said. “He’s such a triple threat. He’s a really good dancer, and he’s a great singer, and he’s a very funny comedian.”

All things needed to play the iconic role.

Bell said he didn’t have his eye on the Cat in the Hat specifically, but said it’s been a fun challenge to play.

“He’s a cat so he’s definitely into mischief and mayhem,” Bell said. “I generally try to play him as being a mischievous character, but when things get serious, he can be serious.”

Being the narrator means you have to memorize a lot of lines, but Bell said the most demanding aspect was switching between all the smaller roles he plays.

His favorite number? “How Lucky You Are,” which comes about halfway through the show.

“I get to go on stage and play around with Thing 1 and Thing 2 and just have a lot of fun.”

Jojo is played by real-life siblings Alexa and Ian McLean. The brother-sister duo are alternating performances, which Meyers says isn’t typical, but has provided the show and the actors with an interesting dynamic.

Funny enough, Meyers said he didn’t even realize the two were siblings when he had narrowed it down to just them during auditions. He decided to do something different and cast them both for the main role. Ian is younger, just turning 12, while Alexa is 15, he said.

“It’s very different to walk out and little spritely Jojo-Ian is in your face and then Jojo-Alexa is more inquisitive and more like a teenager, so it’s neat,” Meyers said. The role has been re-written to be genderless, using “my kid” rather than “my son” or “my daughter” when referring to Jojo.

Bell seconded Meyers’ take on acting with the brother-sister duo in the role of Jojo.

“With Jojo, Ian and Alexa are very much different people, so it makes it a fun activity where each night you’re doing it a little bit different,” he said. “That’s one of the magical, fun things about theater.”

Meyers highlighted the music in particular, with songs ranging from power ballads to hip hop sounds and rock music. Most of the lyrics are pulled directly from the books, and any dialogue was written to match the same pattern and writing scheme the Dr. Seuss books are known for.

“I keep using the word contagious for the music, but it really is,” Meyers said. “I actually feel like you could throw it in your car and just listen to it because it’s great music. It stands alone.”

Meyers and set designer Jay Roberts made an effort to create an atmosphere that is true to the original illustrations in the books, with pastel colors and black outlines to create the Dr. Seuss world.

Bell said the set, costumes and music make the show feel like a Dr. Seuss book come to life.

“The artistic design team did a great job making the set look like a Dr. Seuss book,” he said. “It will definitely strike a nostalgic chord hearkening back to your grade school days.”

And although Seussical might not be the traditional holiday show, Meyers said appearances by the Grinch and Cindy Lou Who still provide a touch of Christmas spirit.

Based in New York but originally from Missoula, Meyers said he tries to come back to his hometown to do a show with MCT every two or three years.

“I think it’s important for me to come back and do things here just because it is my roots, and so anything I can do to pay it forward.”

MCT will put on its annual “sensory friendly” performance on Wednesday, Dec. 18, where the special effects and sound are softened in an effort to make the show more accessible to people on the autism spectrum.

“It’s the same show, just some of the aesthetic extremes are going to be softened,” Meyers said.

While people might initially assume this musical is for kids, he said it’s something we can all connect to because most of us grew up with Dr. Seuss.

“You forget how well we all know these characters,” he said. “Even if we haven’t seen Horton the Elephant in 30 years, you see it, and then all of the sudden you’re like, ‘Oh, I loved him when I was little. I loved that book.’ So it’s exciting to see the nostalgia.”

Seussical is running Dec. 6-22 at the MCT Center for the Performing Arts.

Tickets for the sensory friendly show on Wednesday, Dec. 8 are $10.