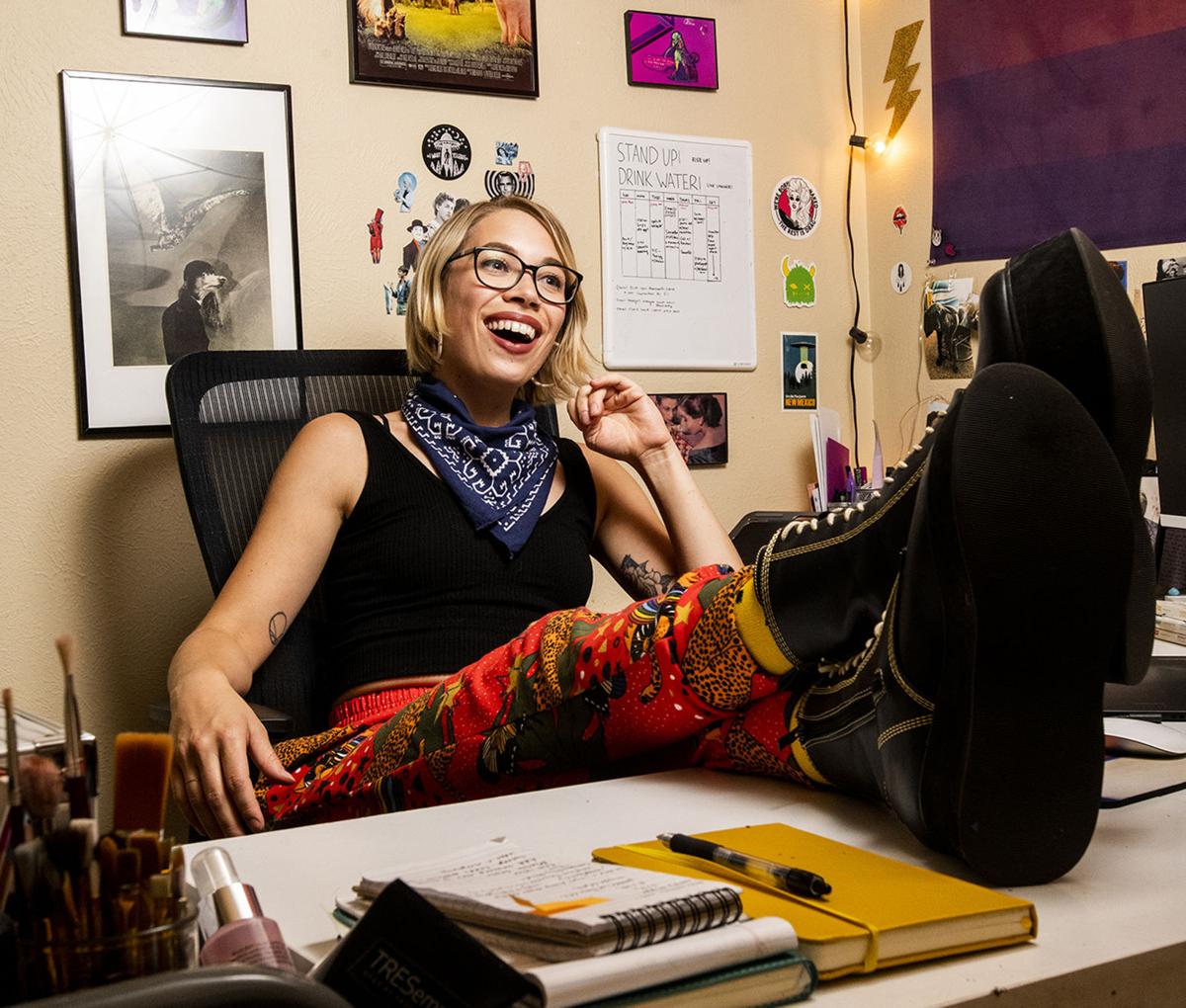 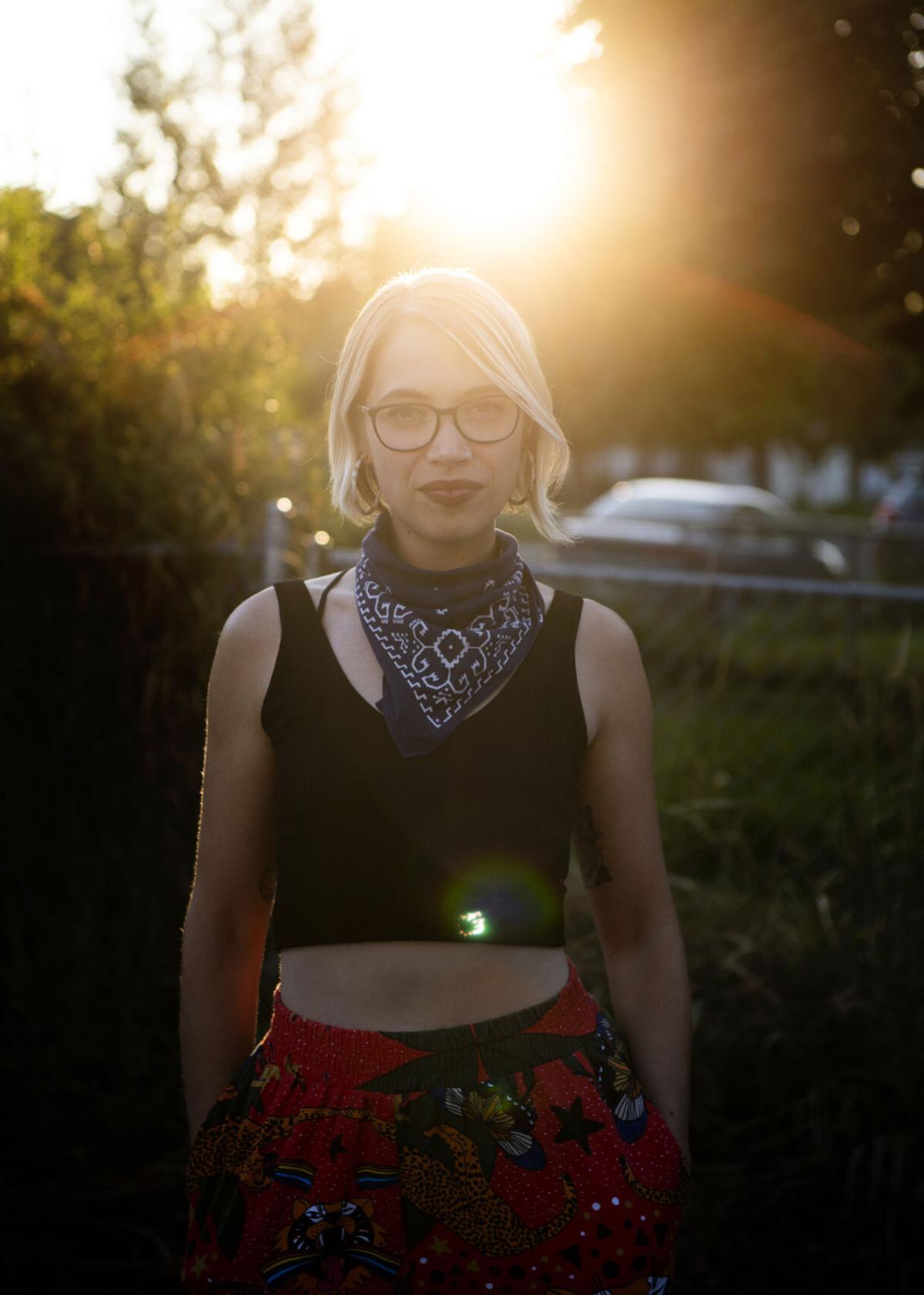 Megan Toenyes outside her home in Missoula in August. “I joke that I’m like a jackalope of all trades or a digital media unicorn,” said the Missoula native, who’s carved a freelance career for herself combining her talents. 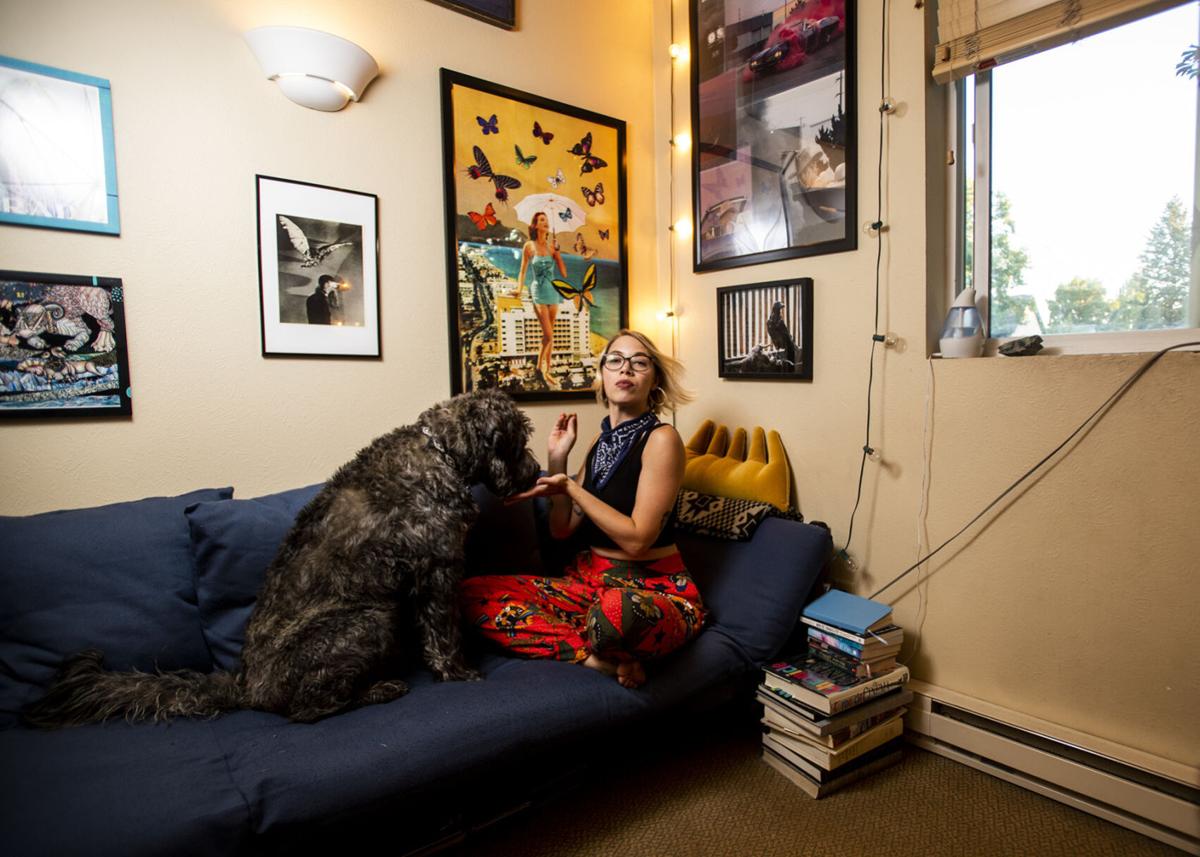 Missoula-based artist Megan Toenyes at her home with her dog Guy in August. Her work embraces the bizarre, strange and surreal and reflects a silliness and sense of fun that’s evident in her art, YouTube videos and her personality. 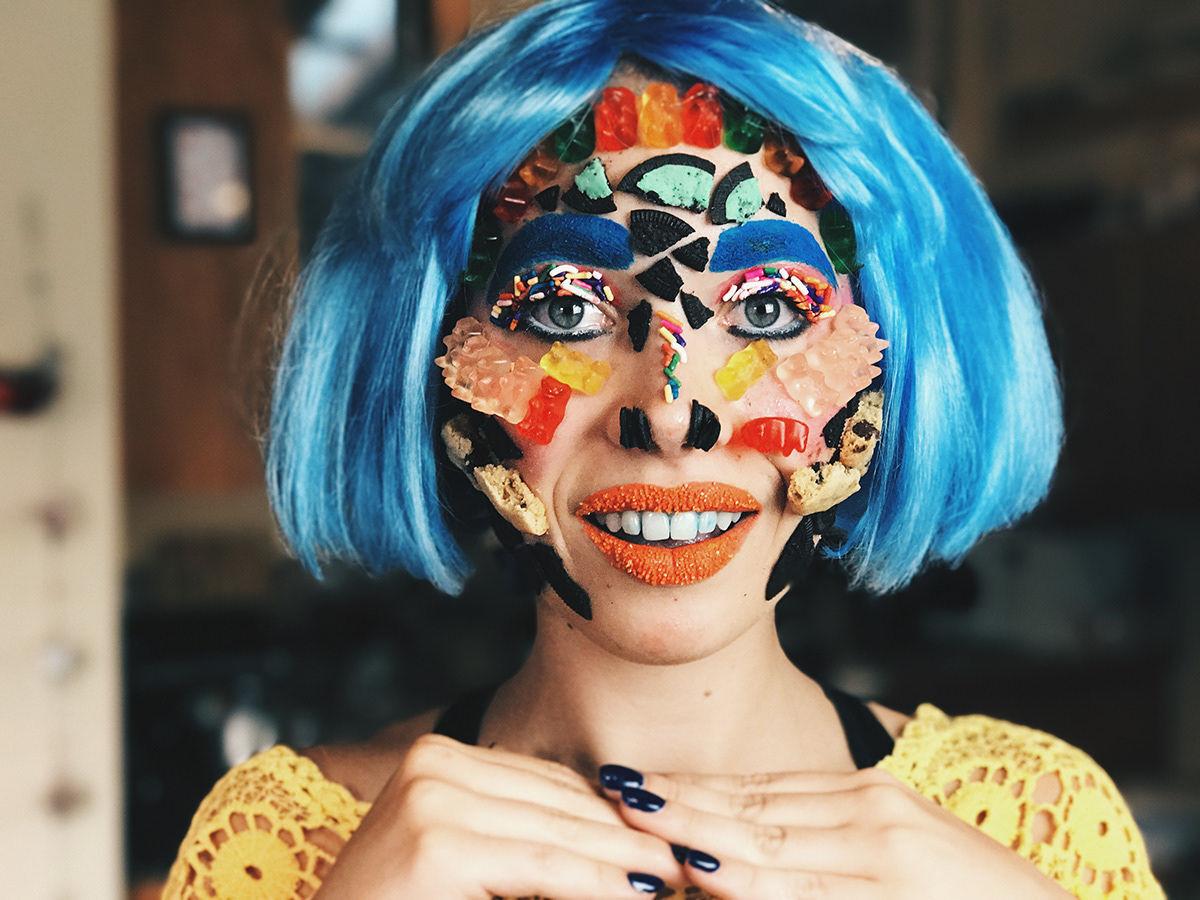 When Megan Toenyes was a little girl, she used to stare at her face in the bathroom, angling the mirrored cabinets to create multiple versions of herself. Each face became a different character with its own personality and story.

“I did that for hours,” Toenyes said in a recent interview at her home in Missoula. “I called that ‘Megan World,’ and I want to say that’s where it all began.”

“I joke that I’m like a jackalope of all trades or a digital media unicorn,” said the Missoula native, who’s carved a freelance career for herself combining her talents.

Her website bio says she’s “a mad machine of content creation,” emphasis on the word “mad.” Her work embraces the bizarre, strange and surreal, and it reflects a silliness and sense of fun that’s evident in her art, YouTube videos and her personality.

Toenyes grew up an only child until she was 10, when her parents adopted her siblings, so she spent a lot of her younger years alone — hence her mirror game. She loved to draw, paint and was involved in theater, so knew from a young age she wanted performance to be a part of her career path.

In high school, she toyed around with moving to Los Angeles for college, hoping to position herself for a career in the film industry, but ultimately decided the University of Montana’s media arts program was a better fit.

She found her niche in her “Video Editing” and “After Effects” classes, where she learned about motion design.

“The editor is basically the rhythm section,” Toenyes said, adding she was also musical as a kid, singing and playing the piano. “You’re tying together the whole beat and the flow of whatever you’re working on, whether it’s a film or if it’s an advertisement.”

Through college, she developed her technical skills and even honed her performance abilities during a summer ice carving stint with her pageant queen cousin at the Orange County Fair in California.

“We did four shows a day, five days a week, and it was very Sea World-y,” Toenyes said, adding they wore headsets and used chainsaws to create sculptures out of 300 pound blocks of ice in front of a crowd. “That is my secret party trick information that I have.”

For her senior project, she created a stop-motion animated mini-musical called “Not Bad at All - The Ballad of Glen,” about a blind, bipolar man who believes his true self to be a theatrical singing dog.

She moved to Portland after graduating in 2013, but returned to Missoula and eventually received a call from Caitlin Hofmeister of SciShow, Hank Green’s Missoula-based science YouTube channel, about a job working for their new project SciShow Kids.

“Megan was one of the clear like, yes, we want to work with this person on this, because she had just really good ideas about it and was excited, and I already knew she was a hard worker,” said Hofmeister, who had worked with Toenyes on a project while at UM. “Our very first brainstorm meeting about (SciShow Kids), Megan came with this color study that she had done on psychology of colors and making kids feel safe so they could learn. She definitely has whimsy and fun, but the level of thought that goes into every single detail is just mind-blowing.”

Hofmeister said despite coming up with brilliant ideas, Toenyes was never greedy with them.

“I think it’s potentially easy when you’re as talented as Megan to be egotistical about it, and she just is always just kind and generous and fun to work with, and I think there’s a confidence in her work that she’s like, oh nobody’s going to like steal my ideas because they can’t make them happen. She lifts you up and invites you in.”

Toenyes spent two years working for SciShow and said it’s what launched her into the YouTube world. In 2016, her work caught the eye of YouTube channels HissyFit and Snarled, which offered Toenyes work creating her own series.

For more than a year, she filmed, starred in, edited and animated a weekly comedic YouTube series, transforming her face based on themes like “Hangry,” where she painted herself to look like an angry red monster and glued corn chips to her eyebrows, and “Sugar Rush,” where she covered her face in cookies and candy.

“I started messing around with (makeup) on Halloween, and then I got really obsessed with it,” she said, adding the “Makeup Your Mood” looks took her anywhere from an hour to up to five hours.

She ended up creating and starring in two more series, “Death Happens” and “Monster Brain.”

Eventually Toenyes got burnt out, spending 80 hours a week on her YouTube work and feeling drained from putting herself out there for the world to see.

“I learned a lot,” Toenyes said of her work with Snarled. “I’m glad I did it, but it’s not something that’s sustainable, and that’s why I’m not hustling on that right now, because relationships suffer, health suffers.”

As a YouTuber, when your views start to tick up, you also start to get more comments and messages that maybe aren’t as kind, Toenyes said. Some of her videos have more than 2,000 views.

“I burnt out doing (YouTube) because of how vulnerable I was and spending way too much time on it, and then you get some mean messages and you’re just like, why do I even try?” she said. “Now I feel like I do want the art to lead versus me as the personality.”

She said part of her affinity for performance likely stems from her parents' divorce when she was 4.

“There was a lot of … early sadness and trauma that was hard to articulate, and I think that performance and theater … just gave me an ability to feel everything that maybe I didn’t feel allowed to feel in regular life,” she said. “By documenting or by making your life even a little bit more cinematic or filming it intentionally how you want to perceive it helps. It just tells a strong narrative to yourself that kind of reinforces I guess who it is that you want to be.”

She’s now focusing more on her work outside of YouTube, recently working on the title sequence for a new documentary film, creating an ad for her friend’s new Japanese ice treat truck called Kakigori Bar and producing the album art for Loveless, which she said was especially nice to see pop up on Rolling Stone’s website.

She said she’s still on a journey to figuring out exactly how her basket of skills all fit together, but is trusting her gut.

“Hopefully, the work speaks for itself and people can employ me in various ways,” she chuckled, adding her ultimate dream is to make a feature-length film one day. For now, she feels lucky to be able hold down a freelance career in her hometown.

“I’ve been really just kind of falling more in love with Missoula in a new way, because I grew up here and so there was a bit of feeling like I had to move to Hollywood or something in order to get the fulfillment I was searching for,” she said. “I’ve been lucky as far as being able to pursue it and stay in Missoula.”

“Support Our Roots” week kicks off Monday and is meant to be a safe alternative to the city’s two-day music and arts street festival.

Things to do in Missoula: Dining, music, yoga and film

Online, outdoor gigs are only outlets for Missoula musicians as fall approaches

The stay-at-home order in Montana ended in April, yet for local musicians, the places to play live remain mostly limited to outdoor gigs or live-streams, depriving some of a creative outlet and others of much-needed income.

University of Montana basketball player Naseem Gaskin was booked into the Missoula County jail Thursday morning on a felony strangulation charge and suspended from all university athletic-related activities, per the student-athlete code of conduct.

Megan Toenyes outside her home in Missoula in August. “I joke that I’m like a jackalope of all trades or a digital media unicorn,” said the Missoula native, who’s carved a freelance career for herself combining her talents.

Missoula-based artist Megan Toenyes at her home with her dog Guy in August. Her work embraces the bizarre, strange and surreal and reflects a silliness and sense of fun that’s evident in her art, YouTube videos and her personality.