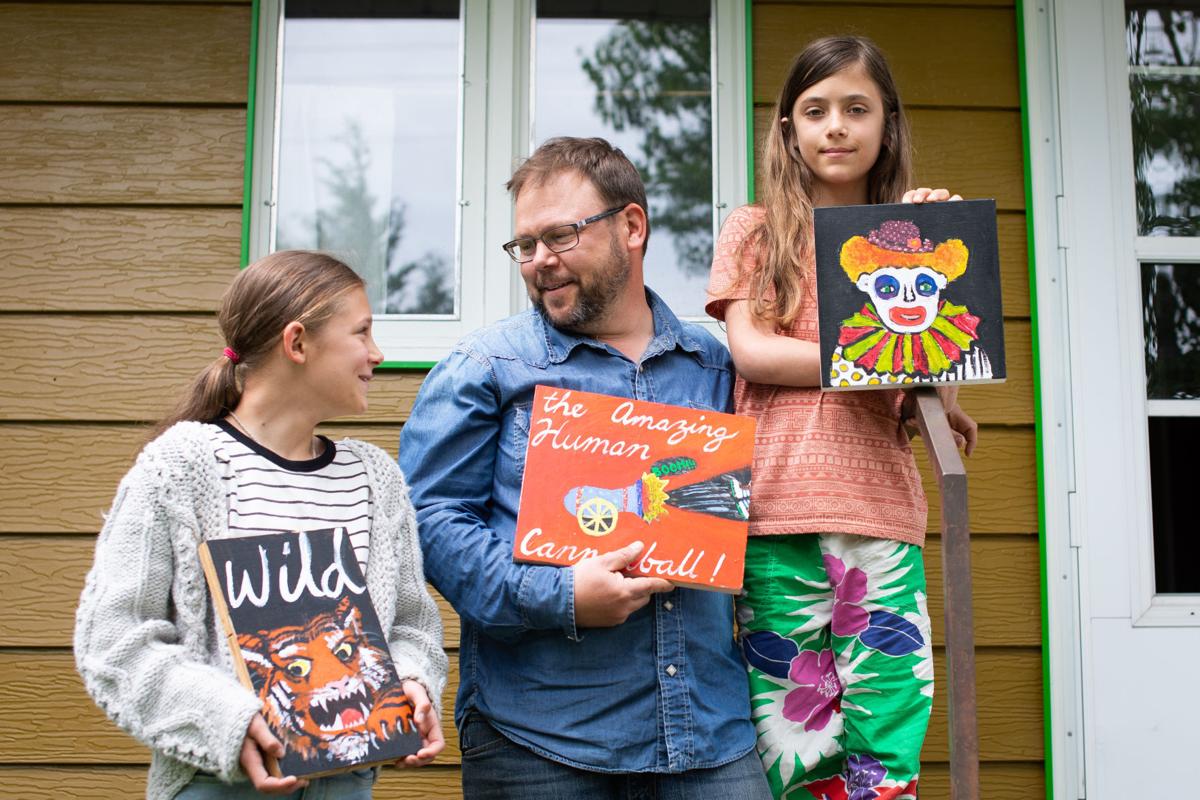 Brandon Reintjes, center, and his daughter, Beata, left, and son, Lauris, right, show off their circus paintings in front of their home on Friday afternoon. The project was inspired by a dream Reintjes had during a midday nap and the series will be on display at Butterfly Herbs starting June 5. 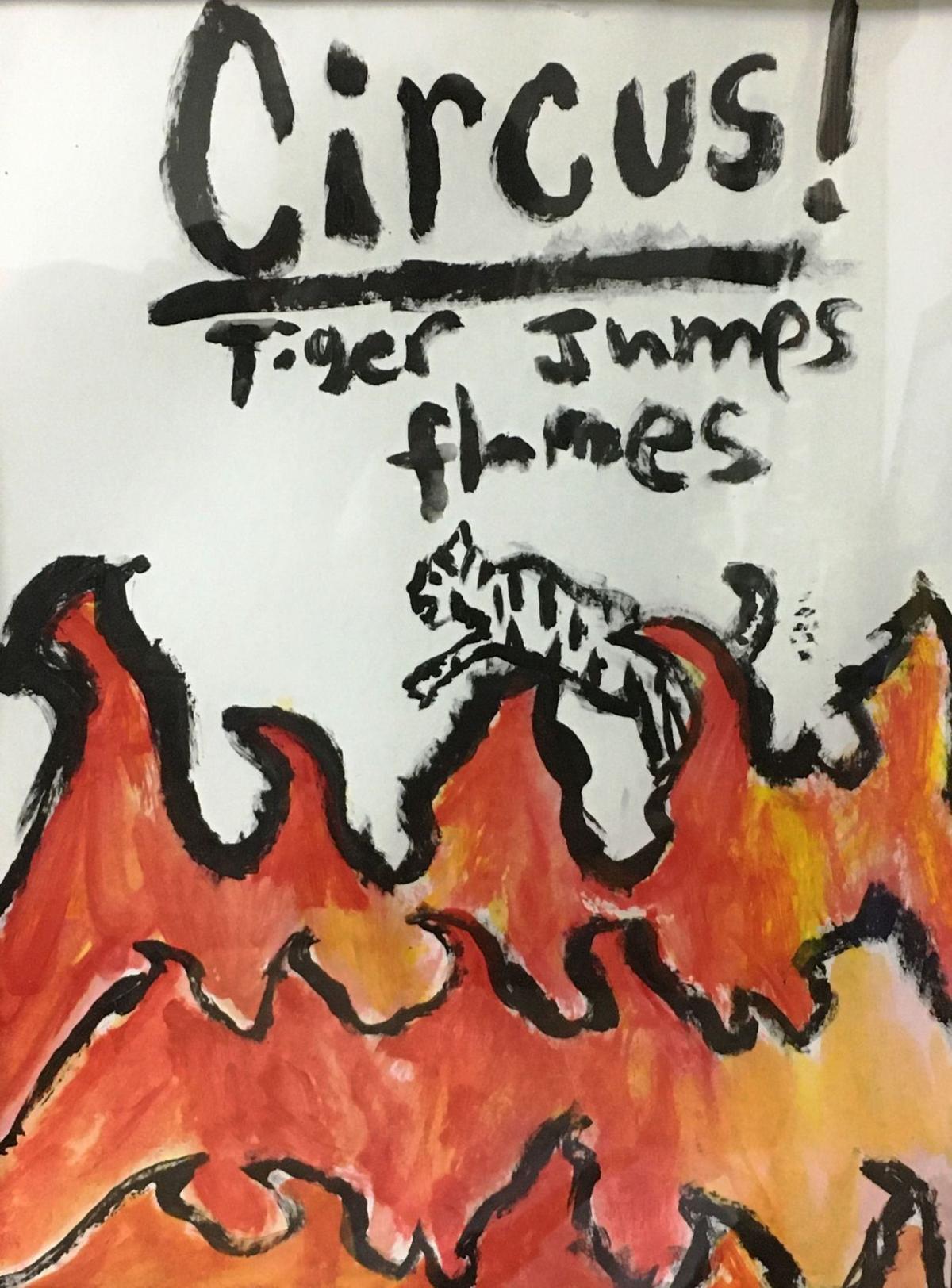 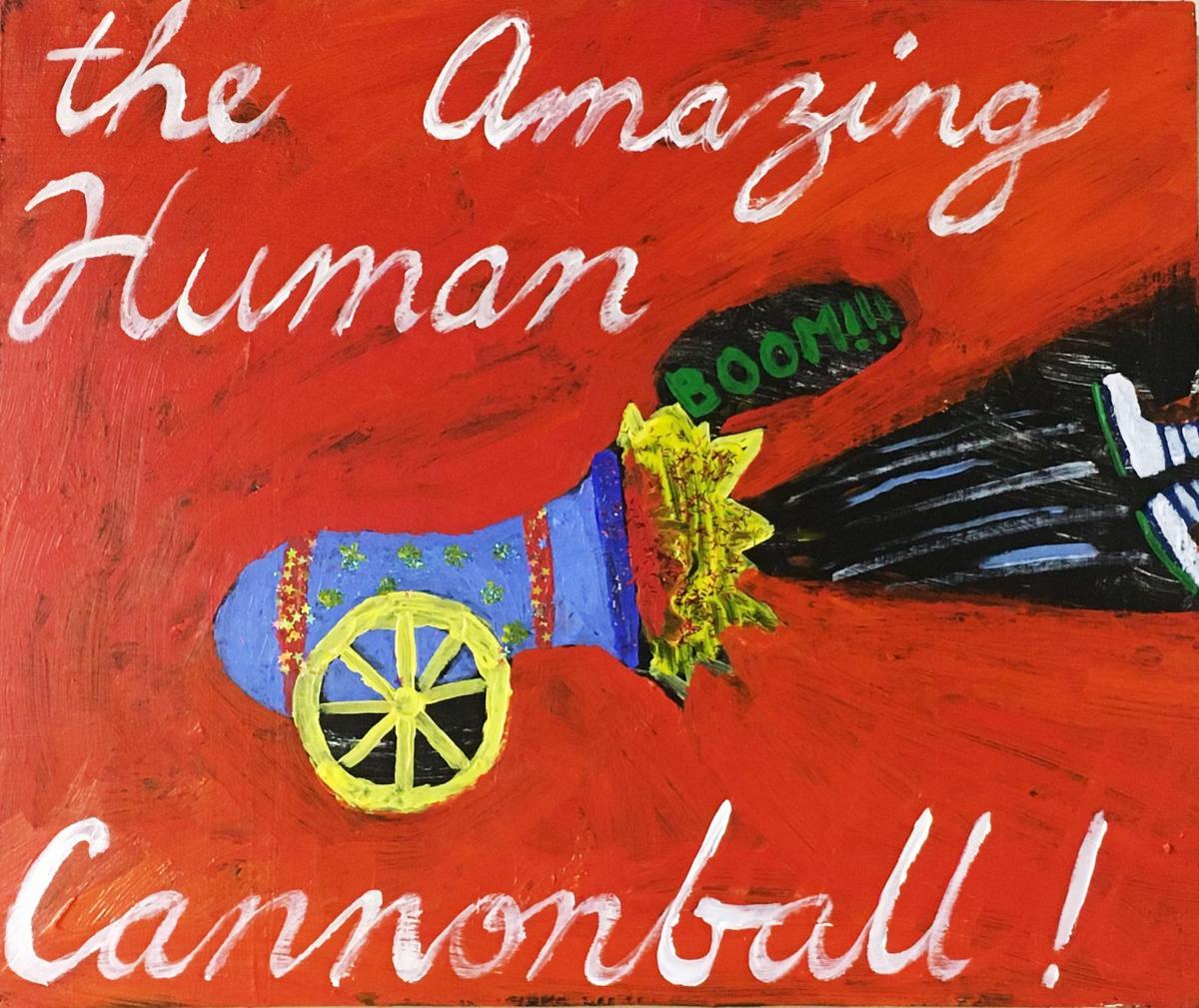 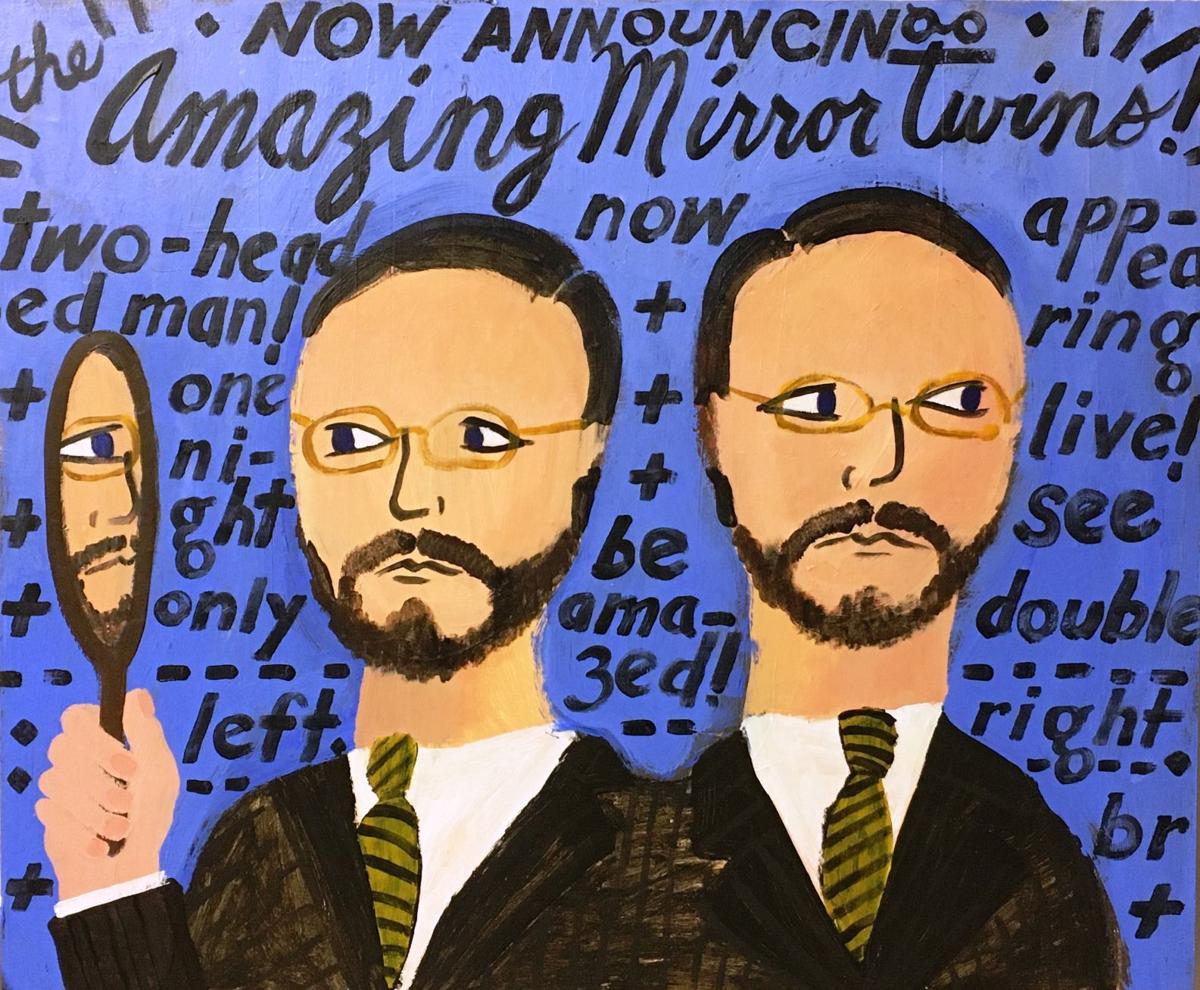 It was a dream come true for Brandon Reintjes. After seeing vivid visions of painting circus scenes with his kids during a midday nap a few months ago, the local artist was inspired to make his dream a reality.

“Under the Bigtop: Circus Paintings,” a series of fun, collaborative and colorful works created by Reintjes, his daughter Beata and son Lauris, is on display at Butterfly Herbs starting June 5. The paintings began as a way for Reintjes to bond with his children and blossomed into a life lesson on letting your imagination flow freely.

“With this circus project, we tried to kind of de-emphasize expectation or perfection and just the simple act of creating was fun,” said the Missoula Art Museum senior curator and father of two.

While Reintjes, Beata and Lauris all brainstormed their own ideas for what they wanted to paint, they contributed to each other’s work, giving the individual paintings a consistent mood of fun and folly you’d find “Under the Bigtop.” The Reintjes family project looks like it could be a set of artistic advertising posters from the traveling circus heyday.

Beata, 11, said she was inspired to paint a tiger jumping through a wall of flames after seeing a similar stunt on a TV show. She created the black outline of the tiger and flames on her own and Reintjes helped her fill in and blend the red, orange and yellow tones of the fire.

“Throughout the whole process of working together and working on each other’s pieces and talking about them, it was really great to see them pick up a paint brush and paint things directly with the idea that they could edit or correct things later,” Reintjes said. “So we did a lot of painting over and repainting.”

Lauris, also 11, created a “Human Cannonball” scene, complete with a “Boom!!!” caption for sound effect. The paintings almost have a comic book or cartoon quality to them, with many featuring words.

Reintjes was seeing double and painted a scene of a side show act called “Mirror Twins.” Beata and Lauris, twins themselves, helped him come up with the words in the painting’s blue background.

Beata said working alongside her dad and brother was fun and helpful, although she didn’t always take their advice.

“Dad would ask if he could add on to my painting or Lauris would,” she said. “I’d sometimes tell them that I didn’t like their ideas, but mostly I really liked them.”

Day by day, they built on their concepts and made adjustments and changes as they went.

“The pieces are pretty raw or messy or you can see the omissions and mistakes, and it’s just all part of it,” Reintjes said.

He and his wife, Alison, a ceramicist, have local art hanging throughout their home and a studio in their basement for their professional work. While they often expose their kids to different forms of art, taking on their dad’s dream-inspired idea was the first focused project they’ve done together.

Since then and since the stay-at-home order was put into place, he said the kids have been moving from art project to art project. While the two obviously inherited the artistic family gene, Reintjes said the important thing is they continue to see art and creativity as a vital part of life.

“We’ve kind of let them self-define what projects they want to focus on and what interests them and kind of let them do their own exploration,” he said. “What I hope is ... that they’ll realize that that creative exploration is a valid part of intellectual inquiry, that idea that creativity can be part of whatever pursuit that you go towards.”

Beata said this is the first time she’ll have her art on display for the public, and while that makes her nervous, she’s looking forward to the next project she can do with her family.

“It’s just a fun thing to do together.”

"Under the Bigtop: Circus Paintings," by Brandon, Beata and Lauris Reintjes, will be on display at Butterfly Herbs, open 9 a.m. to 6 p.m. daily, starting Friday, June 5. Social distancing measures are being followed.

As Missoula gradually reopens, the art community's museums, galleries and other venues are as well. However, they have set their own rules for…

“We had an idea of what some of her work might look like, but we had no idea there was this breadth of work,” said the MAM's Brandon Reintjes.

Brandon Reintjes, center, and his daughter, Beata, left, and son, Lauris, right, show off their circus paintings in front of their home on Friday afternoon. The project was inspired by a dream Reintjes had during a midday nap and the series will be on display at Butterfly Herbs starting June 5.