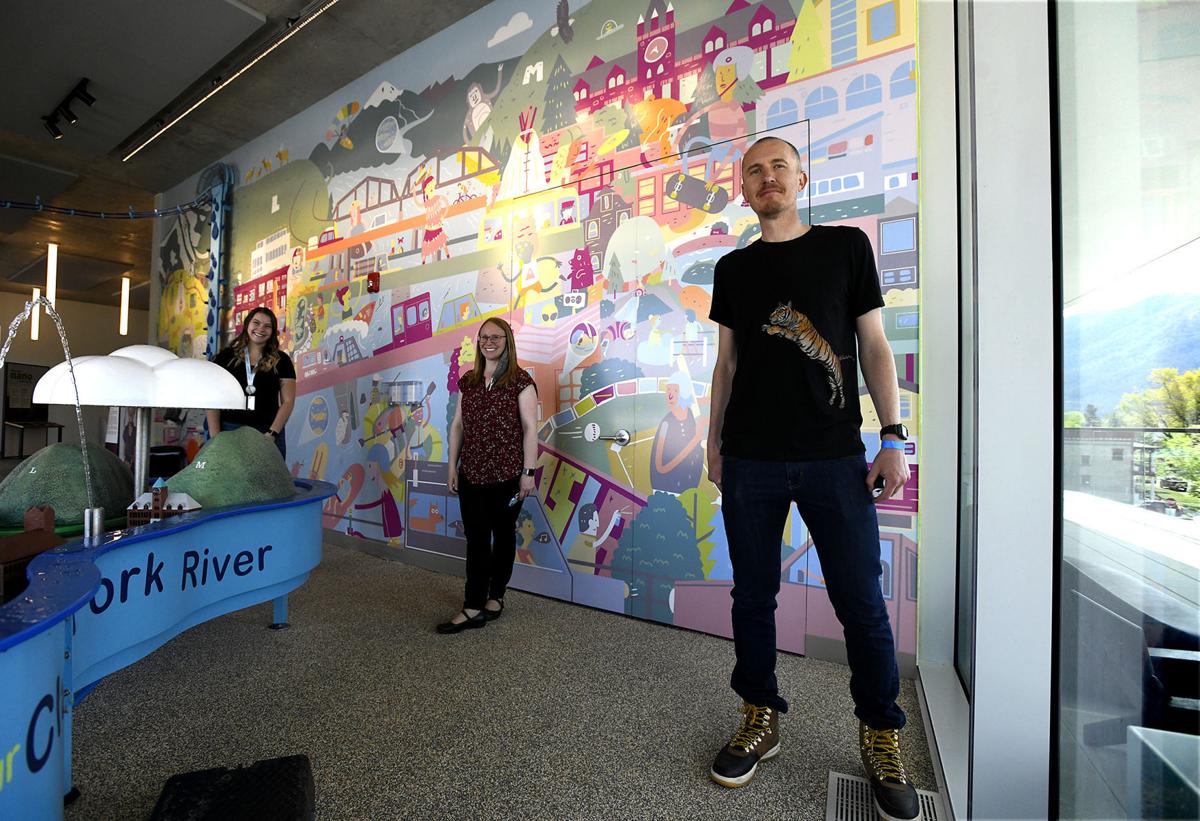 Josh Quick, Jessie Herbert-Meny and Hannah Zuraff, from right, stand in front of Quick's new mural in the Missoula Public Library on Thursday. The mural, in a room with water exhibits for kids, features landmarks and places in the Missoula valley centered around the Clark Fork River.

Josh Quick's mural for the library went from his drawing on paper to computer to a 28 feet by 17 feet vinyl print that was applied to the wall.

A splashy new mural has gone up to complement the interactive kids’ water exhibits at the Missoula Public Library.

The water room upstairs at the new library is a boisterous zone. Kids are splashing around at interactive water tables, where they can tinker with whirlpools or snag artificial fish.

Look out the windows and you’ll catch a south-facing view of the valley. On the wall, a colorful mural, some 28 feet wide by 17 feet tall, by Missoula artist Josh Quick is on display.

It depicts the town, facing east with the Clark Fork River flowing through the center, and its colorful multitude of people, places and things. Quick, a Missoula native, said he was thinking about the city during spring and summer, and wanted to conjure the “friendly feeling of what our community is like during that time.”

The water room is a joint project between the library, Families First Learning Lab and spectrUM Discovery Area. They reached out to the Clark Fork Coalition and other partners to “help identify what we wanted to feature, including recreation around the Clark Fork River, the Missoula watershed, how water flows in our ecosystem,” said Jessie Herbert-Meny, director of spectrUM, while, of course, making it playful and fun.

The coalition has collaborated on other projects in the library, and was “excited about the idea of making that exhibit really place-based and really highlighting the features of everything the river brings, and all the ways the community interacts with it,” said Lily Haines, the nonprofit’s community programs manager.

The water table area's large wall lent itself to a mural, so they had discussions about what sort of imagery would work there.

Quick has been a fixture around town for a long time through comics, illustrations and graphic design projects. You probably recognize his work from T-shirts, beer cans, posters and traffic signal boxes. He also published a book, “Montana Quick Facts,” in 2019.

After talking about some of the features the groups had in mind, Quick aimed to include landmarks and features of his hometown. The seasons and color scheme (light and unsaturated) are intended to match the spirit of the room, and will no doubt seem brighter in wintertime.

The mural is dotted with Missoula icons — the library itself, and the Wilma, University of Montana’s Main Hall, the Caras Park dome (with a band out front), the Missoula County Courthouse, Mobash, Ogren Park at Allegiance Field, Currents Aquatics Center, the Silver Summit All-Abilities Playground at McCormick Park, A Carousel for Missoula and more. Various forms of recreation include surfers, rafters, cyclists, skiers, runners, hikers, skaters, readers, taggers, folfers, swimmers, anglers and players, some of whom are “like avatars” based on people you might have seen.

He drew the mural design on a large piece of paper, like a large-form comic, then scanned it and used Illustrator to develop a vector drawing that can be scaled up without losing definition. The finished mural was printed on vinyl by Alpha Graphics — Quick is happy with the surface, which can be reproduced if need be.

Notable natural tidbits include a little herd of elk atop Mount Jumbo (drawn as a sleeping green elephant). Fauna include a bison, deer, fish, beaver, eagle and a bear on campus — which could be either Rudy Autio's statue or one of the many bears sighted on campus in the past year.

Up on Sentinel, he marked the high-water line of 4,200 feet for Glacial Lake Missoula — which you can glance out the window and see for yourself.

A jingle dancer has a prominent spot on the Higgins Avenue Bridge, soon to be renamed Beartracks Bridge in honor of a Salish sub-chief from the 1800s. Tepees are seen in front of Sentinel and on the Northside to allude to the Flathead Indian Reservation to the north. (They consulted with their partnerships on depictions.)

It’s dotted with Easter eggs, too many to mention here. Some non-scientific quirks (you know, for kids) include Godzilla, Sasquatch (urban and rural), green aliens (on the hills, the bike paths).

It’s large enough and dense with details that they made a sign with a “find and seek” key to help look for say, the Peace sign, or the great blue heron, or the skier bombing down a slope.

Quick said as an artist, “the pinnacle is having a public piece that anybody can go to see” in free space. He’s talked with other local artists about the impression made on them as children by the library’s Gnome House, the fantastical multi-story creation by Mona Frangos.

“My hope is that this will be a similar thing,” he said.

“The Watershed Experience” is on the second floor of the library, with interactive water exhibits, which, by the way, use chlorinated water.

A Clark Fork water table sends a miniature river flowing between Jumbo and Sentinel, past a miniature Caras Park and Main Hall toward a wave with a kayaker. Kids can summon rain with a spigot disguised under a cloud, or go angling with mounted poles that will snag magnetic fish and learn about different species of fish. (Accompanying graphics are going to be in place, soon.)

The other station is designed to help kids learn about the aquifer — a Rube Goldberg-like contraption allows kids to set a ball on a vertical conveyor lift and crank it up through some tubes on the ceiling and then watch it splash back down into an artificial whirlpool.

The offerings will expand in the future, as their various partners like Missoula Insectarium, Watershed Education Network and more might bring in everything from live bugs to groundwater models.

The week started off with a flurry of concert announcements for KettleHouse Amphitheater, plus a new date for the Wilma, indicating a summer will look and sound a lot more like 2019 than 2020.

If you sit still in nature for long enough you may just happen upon something magnificent — a meandering grizzly bear, a perched eagle or a pl…

“It Takes A Village,” at the Missoula Art Park, where it will be on display until October.

Things to Do: Imagine Nation celebration, Dana Gallery's 'Our Town'

Here’s a guide to some upcoming arts events in Missoula in the week ahead.

Josh Quick, Jessie Herbert-Meny and Hannah Zuraff, from right, stand in front of Quick's new mural in the Missoula Public Library on Thursday. The mural, in a room with water exhibits for kids, features landmarks and places in the Missoula valley centered around the Clark Fork River.

Josh Quick's mural for the library went from his drawing on paper to computer to a 28 feet by 17 feet vinyl print that was applied to the wall.