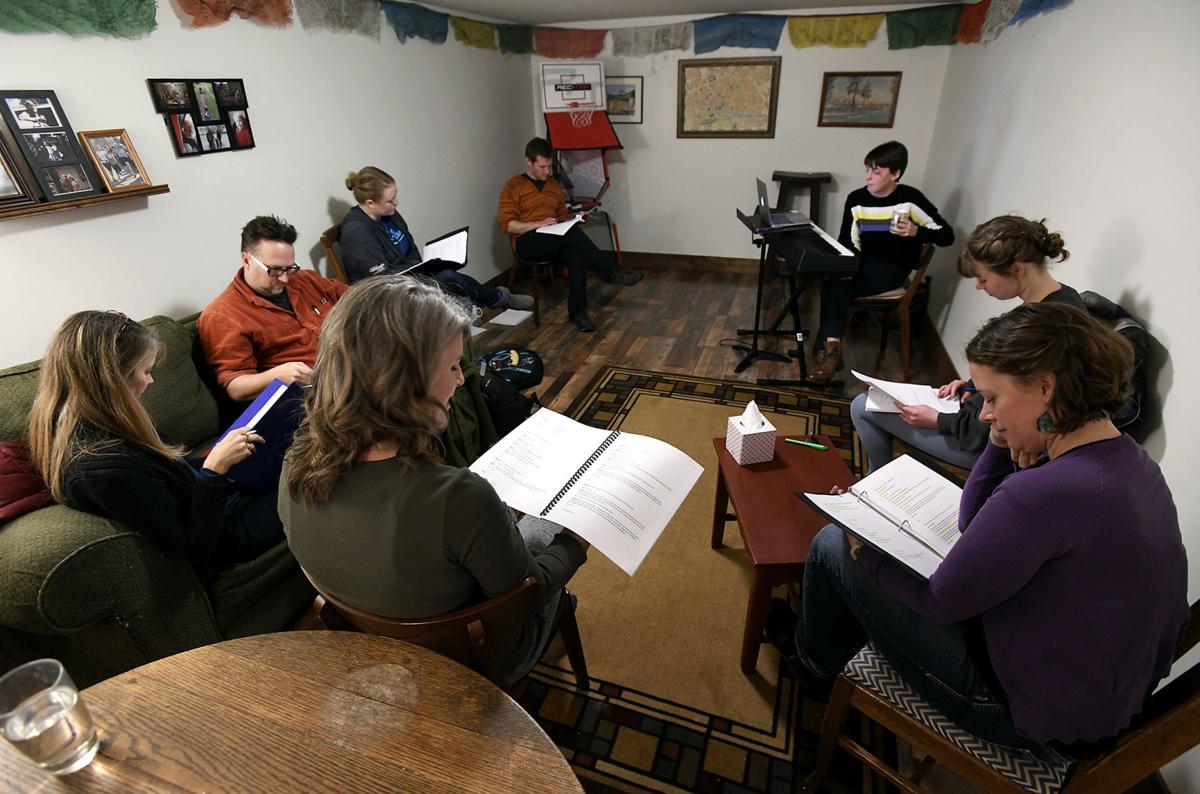 Writers and cast members read through "Spin Rate," a musical dramatic comedy that will be workshopped for audience members this weekend at the Downtown Dance Collective. The musical explores a family's loss of its matriarch and the grief that follows against the backdrop of baseball. 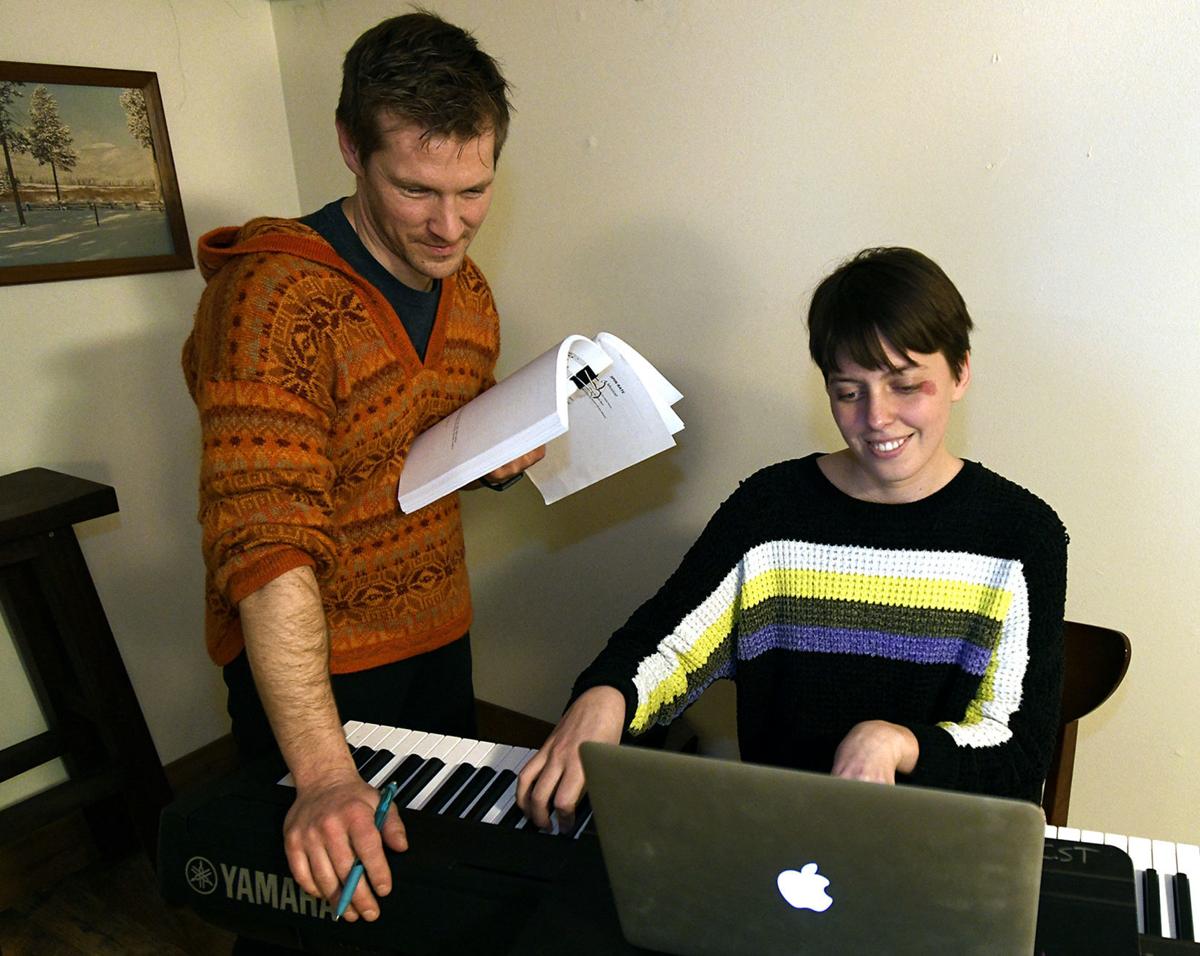 Writers and cast members read through "Spin Rate," a musical dramatic comedy that will be workshopped for audience members this weekend at the Downtown Dance Collective. The musical explores a family's loss of its matriarch and the grief that follows against the backdrop of baseball.

A Missoula playwright is calling for audience members to participate in a workshop series to get feedback on his new original musical “Spin Rate.”

Set for Jan. 17-19 at the Downtown Dance Collective, the workshop invites viewers to participate in a discussion session with the writers following the performance, where they can ask questions and offer suggestions.

The writers will then use the feedback to adjust and rework the show in an effort to improve the piece for marketing on a larger scale. The revised musical will then be performed the next night and audiences are encouraged to attend more than one show.

“Spin Rate” is an episodic dramatic comedy about a family dealing with the loss of its matriarch to amyotrophic lateral sclerosis (ALS). The musical explores the ways people deal with grief to the backdrop of America’s favorite pastime, baseball.

The work is a collaboration between Davis, who wrote the story and lyrics, and music writer Jane Best, a graduate student in music direction, piano and conducting. Additional lyrics were written by Arwen Grace Baxter and the cast is made up of local community members and three University of Montana students.

Davis, a graduate student in the directing program at UM, said “Spin Rate” was not originally intended to be a musical. After losing both his paternal grandparents in 2018, Davis said he was seeing a therapist on campus to help him deal with the grief. His therapist had suggested he write a letter to help sort out his emotions.

“It sort of transitioned into this introspective searching, trying to find some healing for myself,” he said. “And it grew into a story that really has nothing to do with my own life, outside of a lot of themes involved about how we handle grief, what does grief do to us and how does it affect us over time?”

“Spin rate refers to the spin of a ball as it’s coming out of the hand of the pitcher, and a curveball is going to have a greater spin rate than a fastball,” Davis said. “So the family’s been thrown a curveball and as the mother passes, the daughter finds herself gravitating more and more to this singular focus on baseball as a way to connect with the thought of her mother.”

In turn, the daughter starts to shut out other people in her life as her father also retreats into himself.

Music writer Best said writing for someone else’s words has made her a more creative writer and she’s been exploring how people communicate while working on “Spin Rate.”

“They’re all very not sure how to reach out to each other and they all need it, but they can’t find it,” she said. “So how can I use the music to connect the audience to how they’re feeling even when the characters themselves can’t say it?”

One of the things on which Best and Davis said they hope to get feedback is the character of “Young Jenny,” who is the child version of the main character and appears throughout the musical.

“We wove her into the narrative in both past tense and present tense to sort of work on the thematic idea of grief being something that dislodges our sense of linearity,” Davis said.

Best said she wrote a waltz theme for Young Jenny that plays whenever she enters the story.

“I’ve had a lot of fun with her music because she’s kind of not always a real person, so I have a little theme,” Best said. “It’s supposed to sound like a music box, so whenever she shows up or whenever she becomes a part of the story, we reference her theme so the audience is like, ‘Oh, now we’re in this kind of not real world.’”

They’re hoping with the audience feedback, they’ll be able to see if Jenny’s character is successful, if it confuses the audience or if they may need to just tweak how she’s presented.

“How can we take the feedback that we get from the audience, marry that with the vision that we already have for the piece and get it to the next level so that it needs to thrive even further?” Davis said.

In addition to Young Jenny, the characters are all between the ages of 30 and 60. The musical is geared towards people who have lived some life and have dealt with loss or grief, Davis said. And it’s also for baseball fans.

Writing and working on the piece over the past year and a half has helped Davis look at grief from a different angle.

“The longer I’ve been away from the tragedy in my own life, the less sharp the pain is, so I was able to look at this from a storytelling standpoint even more,” he said.

Best said it’s been rewarding to work on a piece of original work.

“Being able to create something from the ground up is really satisfying,” she said, adding you have to set aside your ego during the workshopping process.

“I heard somebody say once, ‘Your show’s your baby, but when you workshop it, it has to be your second cousin that you don’t really care about,’” she said. “You have to objectively look at your work and it can be incredibly helpful.”

Davis said he’s looking forward to getting the opportunity to improve “Spin Rate,” despite the fact that it’s possible someone might not like it.

“I’ve got plenty of ego in lots of areas, but one place I’m finding I’m not really that scared is to have my work get shredded by the public as a writer.”

Workshopping a new musical is fairly typical, and Davis said it’s an important part of the process if you want a piece of work to go anywhere.

“If it’s going to be a piece of theater that other people do beyond this one-time gig, then we’ve got to make sure we make it as tight and as producible as possible. And that’s the goal.”

$7 for students (advance ticket, must present student ID at the door)

$9 for general admission for one performance (advance ticket)

$12 to attend two performances (must purchase in advance)

$22 to attend three performances (must purchase in advance)

Tickets cost $12 at the door

The show is PG-13 for adult language. For more information and to purchase tickets, visit ddcmontana.com.

New and innovative video and dance collaborations from around the world are on tap for Missoula’s seventh annual dance film festival.