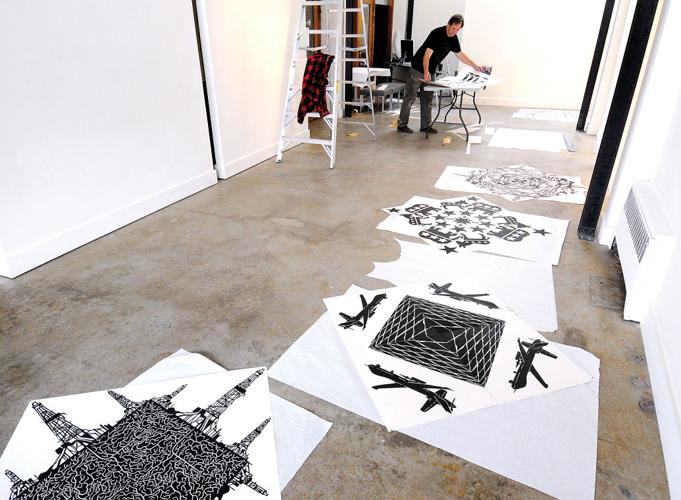 Jason Clark, adjunct professor in the School of Art at UM, works on the installation of his series he calls “Repeat Offenders” earlier this week. 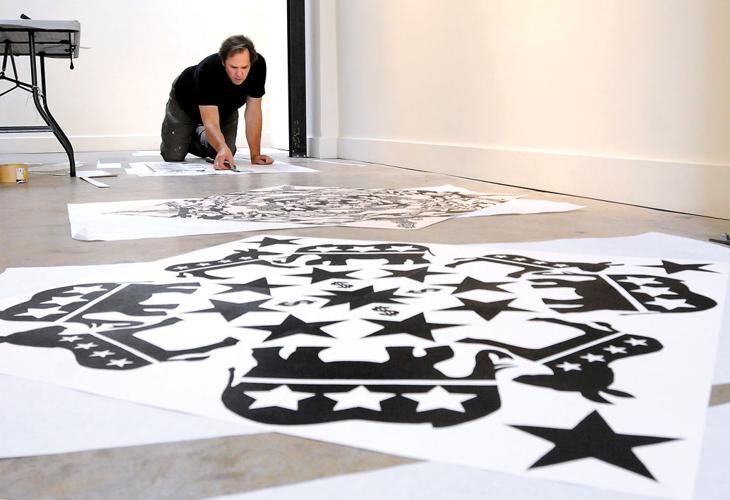 Despite being influenced by the Tibetan mandala, Clark’s woodcuts are simply black on white. “I wanted them to be without color to convey the starkness or seriousness of it,” he says.

A new exhibition at the Brink gallery is one local artist’s way of asking the world not to let the world’s tragedies fade away.

After agreeing to do the exhibition last year, Jason Clark started work developing his ideas. After almost all of his time was up, he said the work he had been able to produce felt forced.

“So I decided in the beginning of August that I needed to go about it a different way,” he said.

With just weeks to go before the exhibition, Clark decided the only way to be happy with the eventual finished product was to start over again. The series, called “Repeat Offenders” references things happening in world culture that Clark finds tragic and disturbing. From oil spills and fracking to the Tibetan conflict, he said too often, they happen, cause a splash, then are forgotten until they happen again.

“We go ‘Oh, that’s terrible.’ And then the next sentence is ‘What’s for dinner?’” he said.

Gallery owner Jennifer Leutzinger said she wasn’t worried when Clark told her that he was starting over a month before the exhibition would open. The two of them were students at University of Montana together as undergrads.

“I trust the artists to know when they’ve made something that they want,” she said.

This will be the first exhibition in weeks, as Leutzinger said the Brink always takes August off. This year, they let the Zootown Fringe Festival use their space for the month as a coordinating headquarters. She said she’s excited about the shows that will be coming up the rest of the year, and that she’s already booked all the way through the end of 2015.

“The gallery was first intended to feature more national artists. As the years went on, I saw how important it was to focus on local artists,” she said.

For the pieces at the Brink, Clark took some of his aesthetic inspiration from the Tibetan mandala. Each of the woodcut prints is made four times, with the prints being arranged together, the edges of the designs lining up in a tessellated pattern that forms a mandala-like circular pattern.

Unlike the colored sand of the traditional mandala, Clark’s creations are bold in their stark, color-less black on white.

“I wanted them to be without color to convey the starkness or seriousness of it,” he said.

In addition to his own artwork, Clark is also an adjunct professor in the School of Art at UM, as well as maintaining the 2D art studios at the school where printmaking, photography and drawing work is done.

In order to make enough prints, Clark enlisted the help of UM grad students at the school’s MA-TRIX Press, who helped him put out 160 prints last week. Each of the students who helped, and the printing company, received their own copies of his work as thanks.

Clark said he likes the idea of having his exhibition opening on a First Friday, where an artist is there firsthand to see how the audience digests their work.

Jason Clark’s exhibition “Repeat Offenders” will open Friday, Sept. 5, at The Brink gallery in downtown Missoula. The exhibition will be up until September 27. The Brink is open Thursday-Saturday from 10 a.m. to 3 p.m. and is located at 111 W. Front St.

A one-night-only show will give viewers a slice of the contemporary art scene in the Garden City.

Entertainer: 7 things to do in western Montana

A new concert series is setting up in what might be Missoula’s most scenic outdoor venue.

View a slideshow of the art openings in Missoula tonight.

View a slideshow of the art openings in Missoula tonight.

Michael B. Jordan was offered directing tips from Bradley Cooper and Denzel Washington

Jason Clark, adjunct professor in the School of Art at UM, works on the installation of his series he calls “Repeat Offenders” earlier this week.

Despite being influenced by the Tibetan mandala, Clark’s woodcuts are simply black on white. “I wanted them to be without color to convey the starkness or seriousness of it,” he says.