A collage of show posters collected by a University of Montana history class. Leif Fredrickson and his students conducted research and oral histories to create, "A Music Mosaic: How Missoula Built a Rockin' Community," which is on display at the Zootown Arts Community Center. 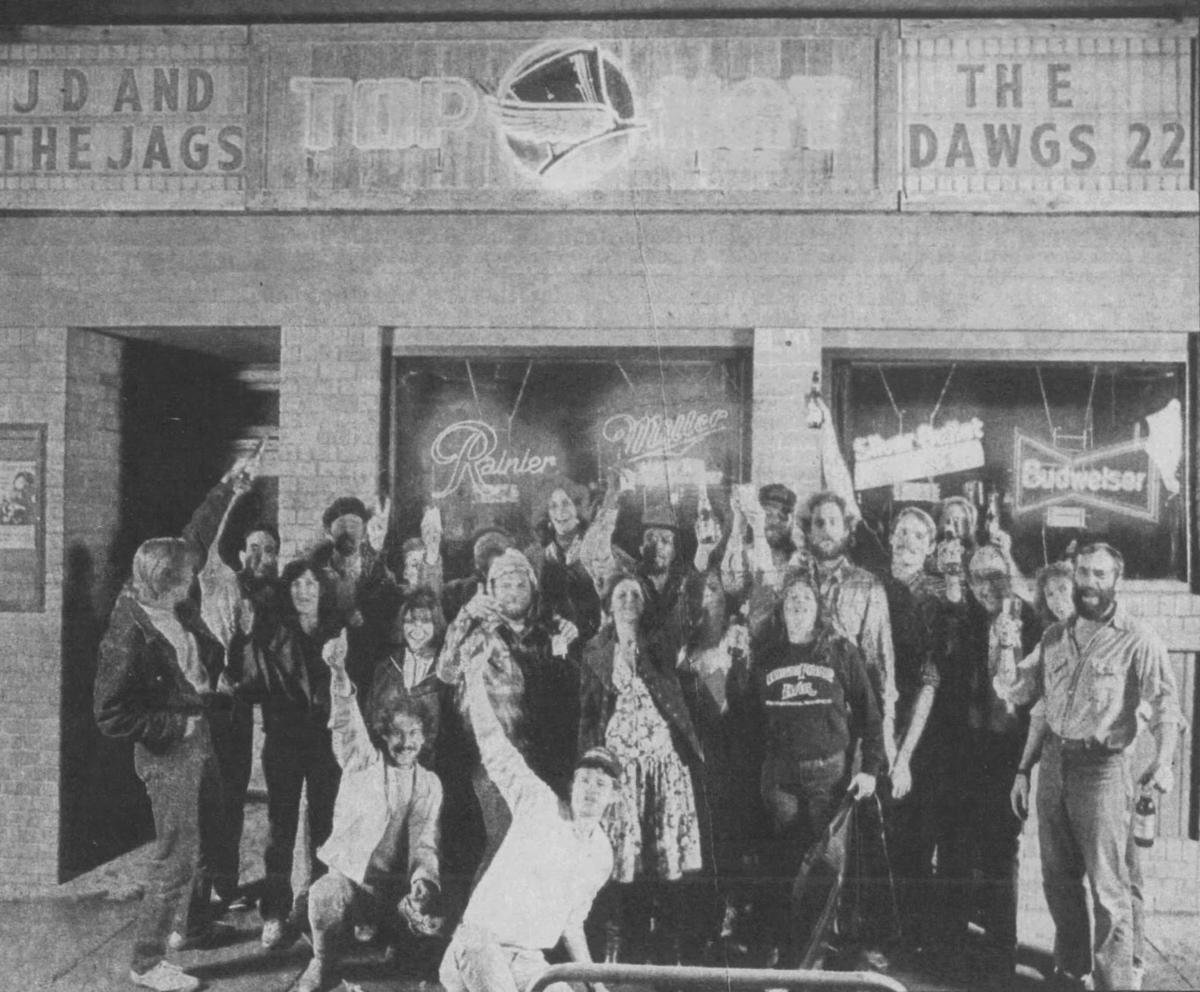 Fans gather outside the Top Hat after it closed in November 1986. 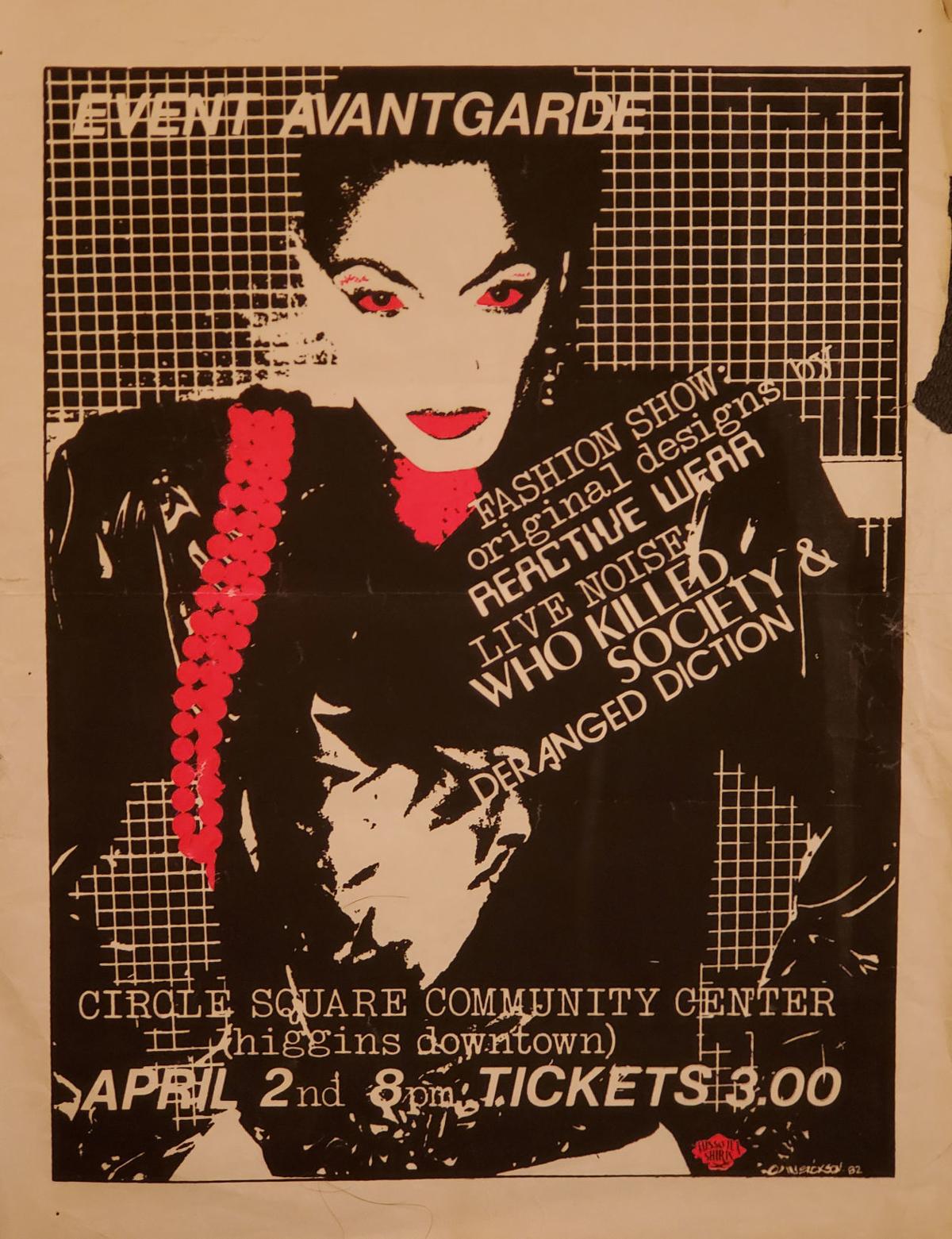 A poster for a fashion and punk show.

A collage of show posters collected by a University of Montana history class. Leif Fredrickson and his students conducted research and oral histories to create, "A Music Mosaic: How Missoula Built a Rockin' Community," which is on display at the Zootown Arts Community Center.

Fans gather outside the Top Hat after it closed in November 1986.

A poster for a fashion and punk show.

What's the story of rock music in Missoula? How do groups like '60s psych rock band the Vulcans, the '70s Aber Day legends the Mission Mountain Wood Band and '90s sound engineer Steve Albini all fit into a narrative about music in a particular small town in western Montana?

While the broader history of rock 'n' roll in the United States, or everywhere, really, has been documented in an uncountable number of books, journalistic articles, history projects, documentaries and podcasts, there have been fewer efforts to tie all the threads together for Missoula and Montana.

If you have an hour or so to spare, a new historical exhibition, "A Music Mosaic: How Missoula Built its Rockin' Community," at the Zootown Arts Community Center condenses the story and key people, bands and venues into a tight narrative.

The exhibition was created by a University of Montana introductory public history class taught by Leif Fredrickson, based on a semester's worth of archival research and oral histories.

After their fieldwork, the larger theme that emerged was about "the relationship between music and community, and how the Missoula community both helps foster creativity, and also how the building of music scenes helps foster community," he said.

The verb "built" in the title was a deliberate choice. There were many "individuals who were really important in making the Missoula rock scene or scenes successful," he said. That could mean people like Jeff Ament, who went on to form Green River and Pearl Jam; Colin Meloy, who played in Missoula before moving to Portland, Oregon, to start the Decemberists, or people who took their DIY chops and started or led businesses or organizations locally like Big Dipper Ice Cream (Charlie Beaton of the Banned and VTO) and the Zootown Arts Community Center (Kia Liszak of Sasshole).

Fredrickson's project joins a handful of recent efforts at cataloging music history in the state. Historian Aaron Parrett's 2016 book, "Montana Americana Music: Boot Stomping in Big Sky Country," picked a loose genre and traced it from cowboy songs to contemporary artists. A documentary by Montana native Kirk LeClaire that premiered earlier this year, "... So Good I Can't Take it," focused on the state's new wave, punk and rock scenes from the 1980s through the 1990s. Lost Sounds Montana, an archival project, has released two albums of Montana rock — one is a compilation, and the other a previously unreleased 1960s album, "Birth," by the Frantics, a psych band formed in Billings.

One shared thread is that there are too many bands, stories and people — many no doubt legendary — to include in a single effort. Fredrickson said his class almost felt like they should include a disclaimer about how there was too much to cover.

"It wasn't that those weren't important, it's just that we had a limited time for the semester and limited space for the exhibit, so there's a lot more that you could say, and a lot more bands that you could discuss. We had to make some tough choices about what we could fit in," he said.

They honed in on rock music from the 1960s through the '90s. Starting in the 1960s, you saw more key bands shifting away from evenings of cover sets toward originals, an outlook that would color local rock groups onward to the present.

His students researched newspaper archives to get a sense of key groups through different eras and then focused on a venue or band and conducted oral history interviews. Including Fredrickson's, there were around 18 or so.

They reconvened and considered larger recurring themes and began "the very painful aspect of condensing down all this research and all these great stories to a few words that will be on a couple of posters."

They lay out the venues that were important, such as outlying clubs in the 1960s (the Rainbow Hall, the Green Gables, the Mad Hatter) that jumped onto the emerging rock 'n' roll trend. In the 1970s, things shift to downtown bars like the Top Hat. As a whole, the class focused on the downtown scene, since the material will eventually be turned into a walking tour with Unseen Missoula.

One panel in the exhibit gives a quick history of punk rock in Missoula, with bands like Who Killed Society?, led by Randy Pepprock, and Just Ducky, which featured Steve Albini, a Hellgate High School graduate who later recorded albums by the Pixies and Nirvana. Ament, a Big Sandy native, played in Deranged Diction before departing for Seattle.

The change in drinking age to 21 pushed out younger-leaning underground bands, which flocked to venues like the Moose Lodge and a punk fashion shop called Urbane Renewal, and later found a home base in Jay's Upstairs.

Of course, Aber Day, Mission Mountain Wood Band and the University of Montana are represented in a panel, along with notable alternative bands like the Dixon instrumental metal band WarCry and Silkworm, an independent rock group that later moved to Seattle and then Chicago, gaining wide recognition in underground circles.

For local rock history nerds, Saturday is the day to come down to see them. Besides the panels, they're throwing a rock show and a memorabilia showcase.

First, the memorabilia. People will bring down and share stories, posters, zines, set lists or whatever else they'd like. (Email mikyla@zootownarts.org if you're interested in participating.) Since the panels couldn't fit everything in, they'd like to "have people who were actually there to be able to tell their own stories," he said. Contributions don't have to fit within the scope they picked either — other eras or related items are all welcome.

The name of the rock show, meanwhile, is "This Town is Full of Ghosts." It comes from a Silkworm song, "Garden City Blues," off their album "In the West."

The show's headliner is Andy Cohen of Silkworm, who hasn't played a show in Missoula in some time. He'll perform a solo set, alongside punk veterans VTO and relatively newer names like Tormi (a horn and pop-tinged band) and Crypticollider (a psych-rock group).

They wanted a diverse range of styles and ages because there's "a danger in being a little bit too nostalgic," Fredrickson said.

After Saturday's event, the project will live on in different forms.

Fredrickson's students are developing scripts for an Unseen Missoula historical walking tour of downtown. The oral history collection will go into the Mansfield Library and will eventually be transcribed and available online. The Historical Museum at Fort Missoula has expressed interest in an exhibition that could include more physical objects. He's thought about an online exhibition; there's no single storehouse for all the materials, so it could help draw connections between all the various bands and individuals — or include recordings of the bands themselves.

A local history exhibition and rock show are happening at the new Zootown Arts Community Center this weekend.

The exhibition, "A Music Mosaic: How Missoula Built Its Rockin' Community," opens on First Friday, Dec. 6, from 5-8 p.m.

Then on Saturday, you can see it starting at 3 p.m., with folks showing memorabilia such as posters, shirts, set lists and more.

The show, "This Town is Full of Ghosts," features local bands Tormi, Crypticollider, Andy Cohen of Silkworm, and VTO. Doors open at 6:30 p.m. and the show runs from 7-11-p.m. All ages, cover is $7.

Some references had the incorrect spelling of Fredrickson's last name.

Missoula Symphony Orchestra and Chorale will stick together for Holiday Pops

Tickets are going fast for Missoula Symphony Orchestra and Chorale’s Holiday Pops concert, a tradition for Missoulians looking to get into the…