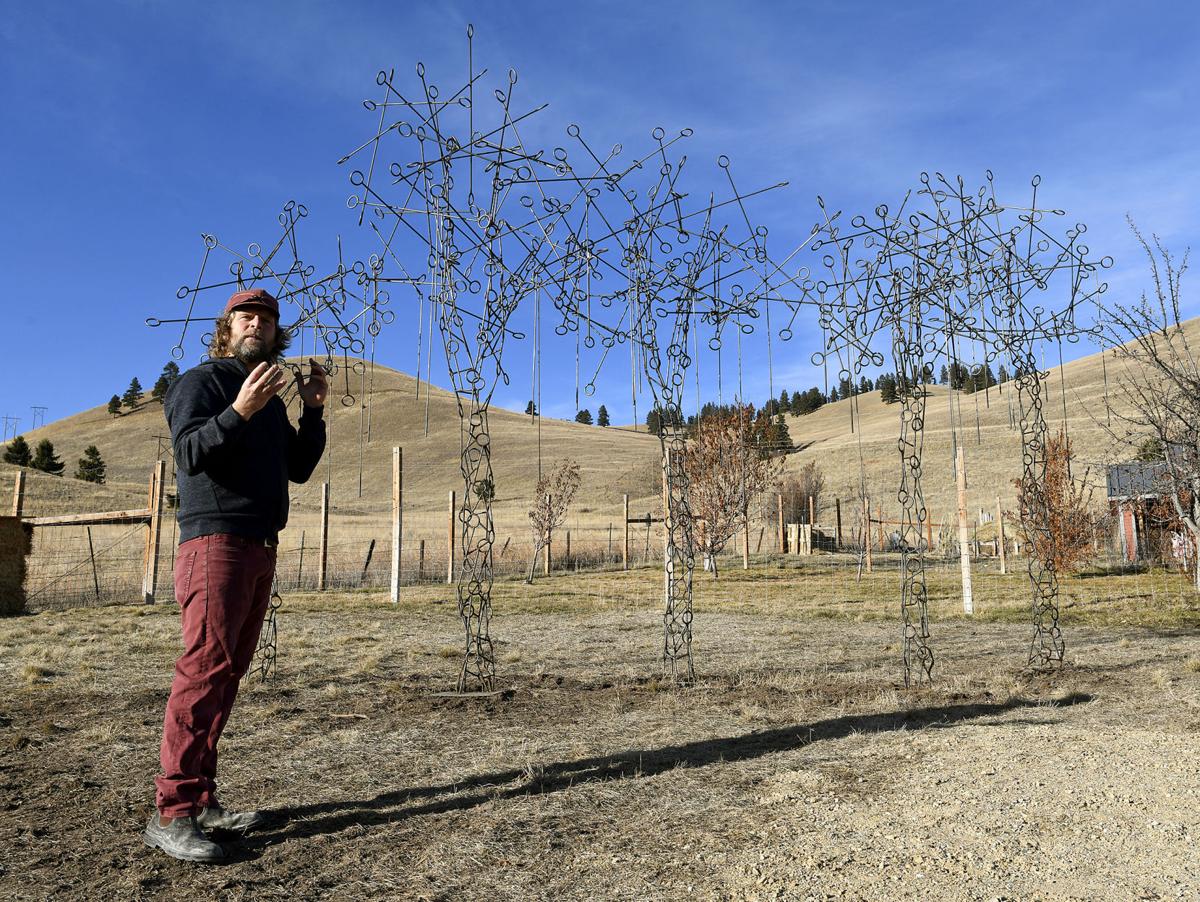 Trey Hill, a ceramic sculptor and art professor at the University of Montana, describes the process of making the steel sculpture that references aspen trees. The work was a departure for Hill, who normally creates large ceramic pieces. 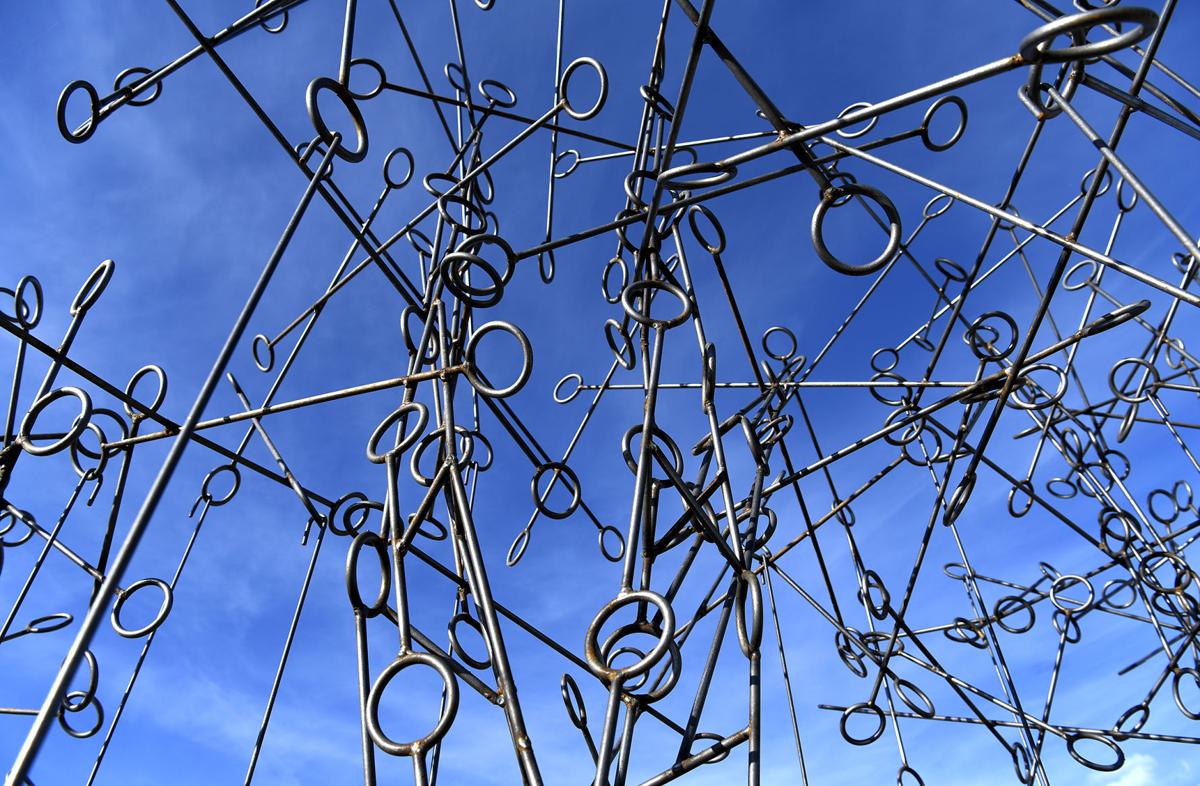 Hill said arranging the rings and rods on the sculpture was one of the most time-consuming parts of creating the piece. 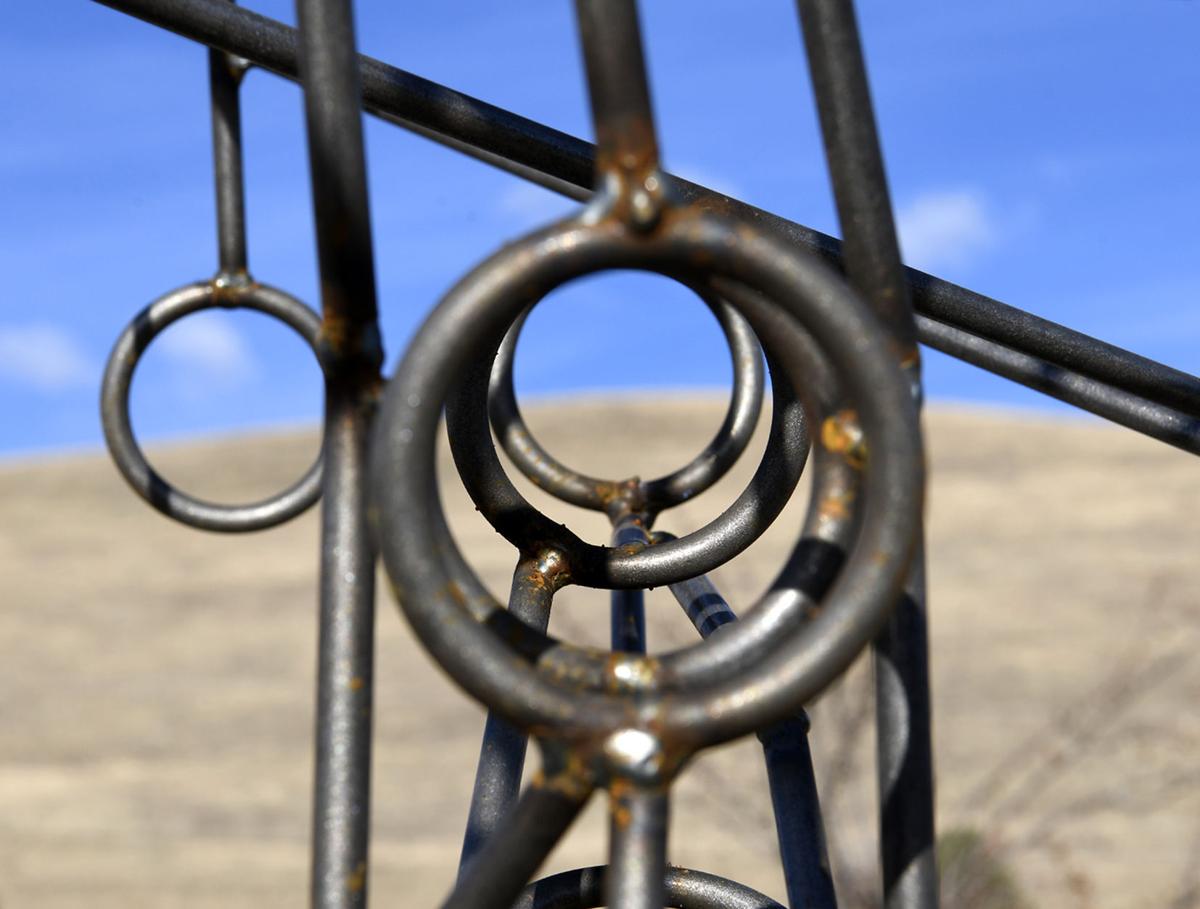 Hidden in Hill's sculpture are rings that line up with points on the horizon. 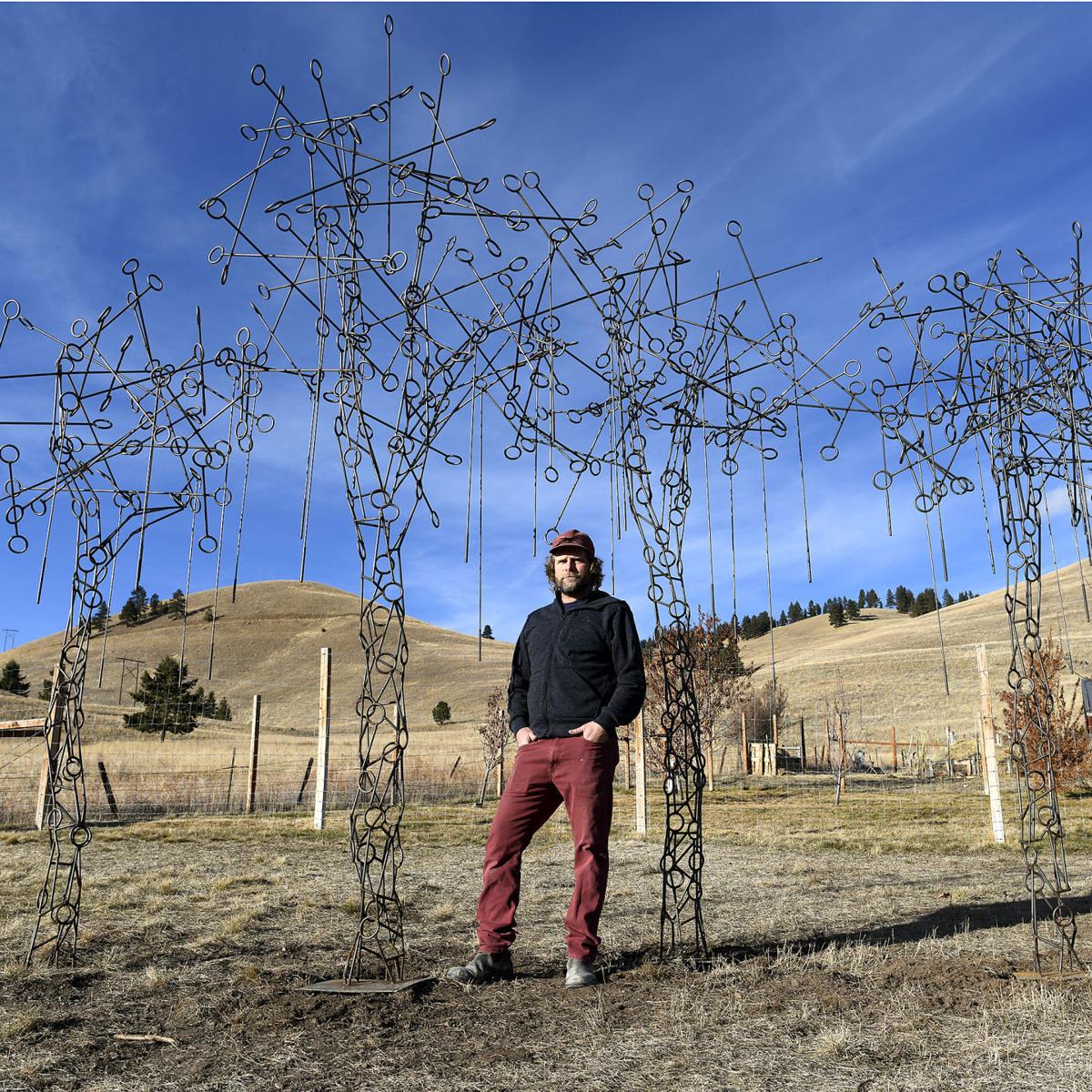 Trey Hill stands next to the sculpture he created and installed in the Rattlesnake Valley.

A new grove in the Rattlesnake won’t get its fall color for a few months.

The snow and moisture will slowly transform these steel trees, along with their line-like branches, ring-shaped leaves and “eyes” on the trunks, into a bright orange. Eventually they’ll settle into faded rust tones.

Trey Hill, a ceramic sculptor and art professor at the University of Montana, giddily described the details of the research for the piece and its experiment in a new style and form that occupied him during its design and construction.

By design, the trees blend with the hills behind them, not overwhelming them. Their placement in an uneven row, with intertwined branches, doesn’t appear unusual from ground level. However, each of the five trees corresponds to a star in the constellation Cassiopeia. That relationship points to “the core of the whole piece,” he said.

“Bring the ground up, and the sky down, and to have a beautiful meeting point in the middle,” he said.

The kernel of the idea came from the property owners who commissioned the sculpture, Rika and Rick Wishcamper.

After they took a trail run through weeping aspen in the Black Hills of South Dakota, they wanted a sculpture that alluded to the experience, but didn’t directly represent trees in a literal leaf-by-leaf sense, for a meditation garden on their farm property off Duncan Drive not far from the city trail system.

They also preferred to work with a local artist, so they connected with Hill through the Radius Gallery. Rika said Hill designed “exactly what I didn’t know I wanted.”

For Hill’s part, the commission pushed him outside his usual way of working.

Hill builds trees all the time, but in clay, not steel. One of his recurring motifs is the trunk, constructed from small rows of coiled material, reaching upward of 14 feet. How large he pushes the height depends on whether he can find a place large enough to fire it.

“I like to make as big a thing as I can fit in my kilns, because it sets up a challenging environment,” he said.

Once he’s done making a piece, though, it goes off to a gallery and then to a buyer. He doesn’t know where it will “live” and never thinks about it while he’s working, another difference with his sculpture here in the Rattlesnake.

“It’s a really pretty special opportunity to know where the piece is going to go, and get to involve the environment from the beginning,” he said.

He does work with metal sometimes. Often, he incorporates wire-frame flourishes on his clay sculptures. But the aspens were a chance to set ceramics aside entirely.

Hill thought up a drastically simplified way of representing the trees — circles and lines. Steel rods comprise the trunks and branches, which were cut to different lengths to correspond to the golden ratio, a measurement to tie it back to the natural world again. The rings, bent by hand, represent the “eyes” on the trunks, or the leaves at the end of the branches. Arranging the branches was among the most time-consuming tasks: Place a branch, see if it looks right, and move on to the next one.

“Easter eggs” are hidden throughout. A set of four rings line up, facing north, like a telescope. Elsewhere, a pair of rings is arranged to line up and move in and out of sync depending on your view, like the phases of an eclipse.

The tallest tree is around 13 feet high, the shortest closer to 8 or 9. Despite all that scale and weight, Hill and the Wishcampers talked about ways to make it blend in so it “doesn’t feel too overwhelming,” Hill said. You can see right through the hatching, intersecting lines. If you stand south of the sculpture looking north-northwest, the tops of the branches form a complementary curve with the distant hills.

The final natural element is the rain — frozen-motion “drops” of precipitation in the shape of metal poles hung from the rings. They’re not welded in place, so they can be moved around freely, or swing around and make a light clanging sound in the wind.

The placement of the tree trunks mirrors Cassiopeia in a zig-zag line, like a flattened “w,” of five stars that draw the torso of the queen from Greek mythology. Rika said the constellation is bright and clearly visible this time of year — it was glowing above the sculpture last week when she and some friends were looking at it after dark. The carefully spaced lines and rings remind her of a star map. From their porch, the line of trees overlaps into a dense thicket.

Bending metal rings and welding the trunks and branches in the studio at UM was a more direct way of building, Hill said. When they got tall enough, he ratchet-strapped the trunks to the wall to continue work. In contrast, the clay sculptures involve more steps and more left to chance. You have to “build this thing, put it in a kiln, fire it, put a glaze on it, and fire it again, and hope that it comes out how you want.”

Things can get broken on their way into the kiln, or in it. Transporting the sculpture from UM to the Rattlesnake was a big day, yet less harried than moving 14-foot clay pieces. (“That’s so stressful,” Hill said.) In October, he and about 10 of his students stacked them in the back of a flatbed truck and strapped them down. After deciding on the placement, they were installed on top of helical piers that go 6 feet into the ground.

On site and completed, the trees accomplish the goal. Thanks to their minimalist interpretation of the idea, Rick said that on a particular day they might remind him of that trail run through aspens. If he’s in a cheerful mood, it could be a funky landscape from “The Lorax.” On another, palm trees in Costa Rica.

“It can be a lot of different things for me depending on what’s going on in my head,” he said.

It will keep changing, too, since they decided not to color or coat it. The trees won’t need more than a few months for the metal to begin to rust to an electric brightness, then continue to fade, as the grasses behind and around cycle through their own palette.

Hill’s enjoyed the whole process and potential of steel so much that he’s readying for a follow-up.

“I’m already cutting metal for another piece, and I don’t know what it is” yet, he said.

Things to do: Live radio play, and two concert streams

Here's a quick guide to this week in art events (i.e. streaming plays and concerts.)

With no live gigs and dropping temperatures, some local jazz musicians set up in a garage with heaters and open doors to keep playing.

“I am going to miss my plants,” said Kelly Chadwick, who retired last week after nearly four decades as the UC Gardens manager.

Trey Hill, a ceramic sculptor and art professor at the University of Montana, describes the process of making the steel sculpture that references aspen trees. The work was a departure for Hill, who normally creates large ceramic pieces.

Hill said arranging the rings and rods on the sculpture was one of the most time-consuming parts of creating the piece.

Hidden in Hill's sculpture are rings that line up with points on the horizon.

Trey Hill stands next to the sculpture he created and installed in the Rattlesnake Valley.