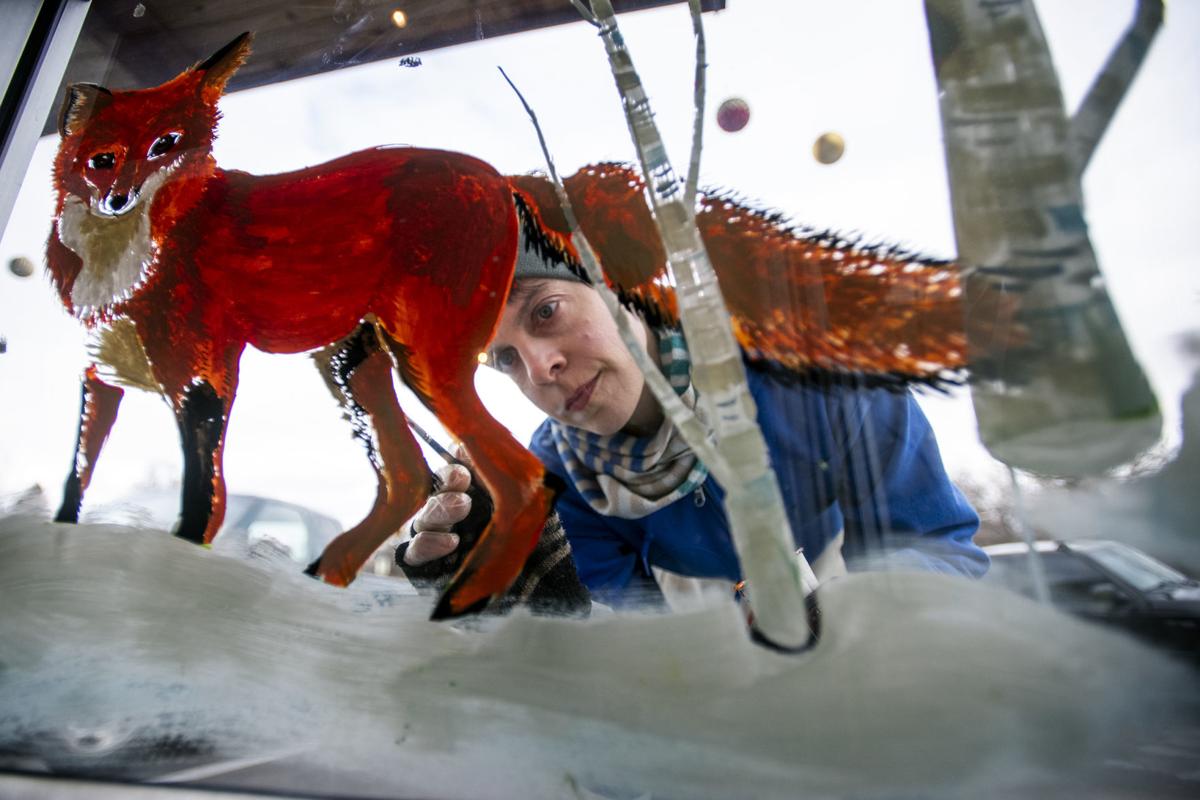 Ann Karp, a painter who goes by Sideways Gaze, is painting various designs on the storefronts of businesses around Missoula as well as a few private residences in the city. Karp has been working professionally on her designs in Missoula since 2015. 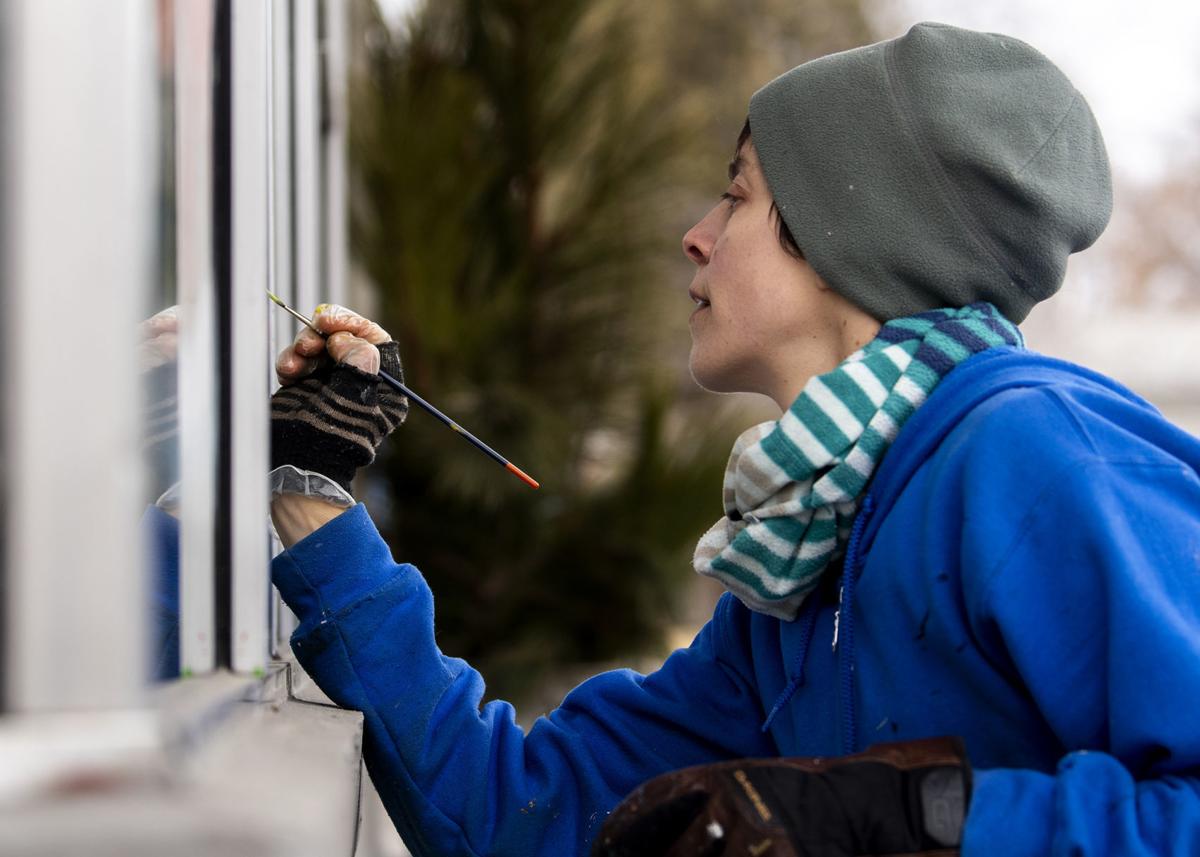 Karp has done work on storefronts for nearly 80 places in Missoula. "Just walking downtown, once you get to know my style you start to see it everywhere," she said.

Ann Karp, a painter who goes by Sideways Gaze, is painting various designs on the storefronts of businesses around Missoula as well as a few private residences in the city. Karp has been working professionally on her designs in Missoula since 2015.

Karp has done work on storefronts for nearly 80 places in Missoula. "Just walking downtown, once you get to know my style you start to see it everywhere," she said.

Ann Karp, the artist behind the hand-painted sign business Sideways Gaze, is everywhere once you start looking.

If you glanced up on Higgins Avenue and saw a faux ghost-sign for the Bicycle Hangar three stories up on the side of the building, she painted that, too. Across the street, if your eyes weren't eagerly trained on your Brazilian bowl at Five on Black, she's behind the colorful murals on the interior walls. If you strode through the Southgate Mall recently and saw an upright piano painted in sharp-edged geometric forms of pink, lime green and Easter blue, or angel wings for an Instagram wall, that was her.

"Just walking downtown, once you get to know my style you start to see it everywhere," she said on a brisk weekday afternoon. She was setting up in front of Great Harvest Bread Co., making seasonal adjustments to a window design that she'd put up a year before.

The owner, Linda Tawney, and her customers have become so attached to it that she hired Karp to come back and make alterations through the year. Today's project was adding decorative apple and orange peels to the trees in 1-Shot, an oil-based paint that won't get worn out by snow or rain.

The animals that populate the window, however, don't go away.

"I feel like people take a lot of ownership of this window, actually," she said. "'You're not getting rid of the fox, are you?' "

People — not just her clients, but passers-by or customers — ask all sorts of questions, she said, a part of the job she likes. They might stop and banter with her at length and ask questions.

"I love that people feel like it's a part of their actual scenery," she said.

It's public art, after all. In a way, her handiwork is on public view more than many of us realize: She's done window or sign lettering, original window art or indoor murals for more than 80 places around town, almost all small businesses, everything from bakeries (Black Cat) restaurants (the exterior of the new Bridge Pizza) and casinos (Flipper's) and spas (Good Medicine Acupuncture and Massage) and some nonprofits (The Roxy Theater).

"I love my work and I love to work with the business community of Missoula, and it's a privilege. I just feel so lucky to get to do this," she said.

It's an enviable rhetorical question not many of us can ask: "My job is to paint foxes. What?" she said with a laugh.

When she was living in Georgia, Karp apprenticed with a veteran sign painter named Jo Knox for several years, starting a process of self-improvement in her art that continues to this day. Here in Missoula, she began knocking on doors around 2015, pitching customers on an idea that sometimes seemed unfamiliar.

With enough word of mouth and visibility — after all, if another business has a hand-painted sign, why wouldn't yours? — her schedule tightened up enough to make it a full-time job earlier this year.

One enthusiastic client is Tom Snyder, the founder and owner of Five on Black, the fast-casual Brazilian restaurant. Karp painted two indoor murals for its original downtown Missoula location. The company brought her out to the Bozeman and Billings locations, as well as Denver and Boulder as it expanded.

Snyder said they discussed the restaurant's aesthetic and gave her some concept drawings and color palettes, and she was "able to create something that is beautiful and fits in our style," he said. The assortment of playful shapes resemble cut-outs from late-period Matisse and complement the restaurants' bright-loud atmosphere. Karp took their suggestions on a style, cut up semi-abstract shapes and moved them around until she made "a harmonious, balanced, energetic composition," she said.

Custom murals in businesses are becoming more popular around Missoula. Snyder thinks it's a smart way of showcasing local talent while beautifying a space. In his case, they wanted pieces that made a statement, and from an owner's perspective, that could feel nerve-wracking and risky. Murals can be as large as the ones in Billings, which stretched across two walls, and totaled 57 feet long and 14 feet high.

Beyond the artwork, he said people feel lucky to get to work with her — she's positive even in chaotic situations like painting a mural during a major remodel when contractors are "crawling over each other."

There are all manner of businesses and types of projects. She might finish a job at a medical clinic and head to Glacier Ice Rink to hand-letter sponsor names on a pair of Zamboni.

She said she's always dreamed of having her own ghost sign, one of the large faded business signs you see on the sides of brick buildings downtown. She came very close earlier this year when the Bicycle Hangar hired her. She took a vintage ghost-sign-style logo up in a lift to paint on the side of the third story of the building. (She considers it a career highlight, but notes that it was petrifying, and went to bed "feeling like I was swaying.")

The Hangar hired another designer for the logo, and she painted it, an arrangement that's common. She works frequently with designers to execute their ideas with a handmade touch. Other times, she does original art or lettering, which also has an analog feeling that she thinks people appreciate in an age where tech is ubiquitous.

The design and typography fan is largely self-taught on lettering, which she said is the trickiest part.

There are considerations about how they'll play for customers and employees, those in the store or those outside, and working with the client about what they'd like. A recent project is Montgomery Distillery's winter scene, with a mountain goat drinking a Moscow Mule and a pygmy owl drinking a martini. She likes to use Montana species as an Easter egg. And sometimes clients like the Nature Conservancy want to be specific about those species.

There's always something new that she's never done before, arising project by project.

If you can't make it to every concert in Missoula, and good luck trying, you can always live vicariously through William Munoz's pictures.