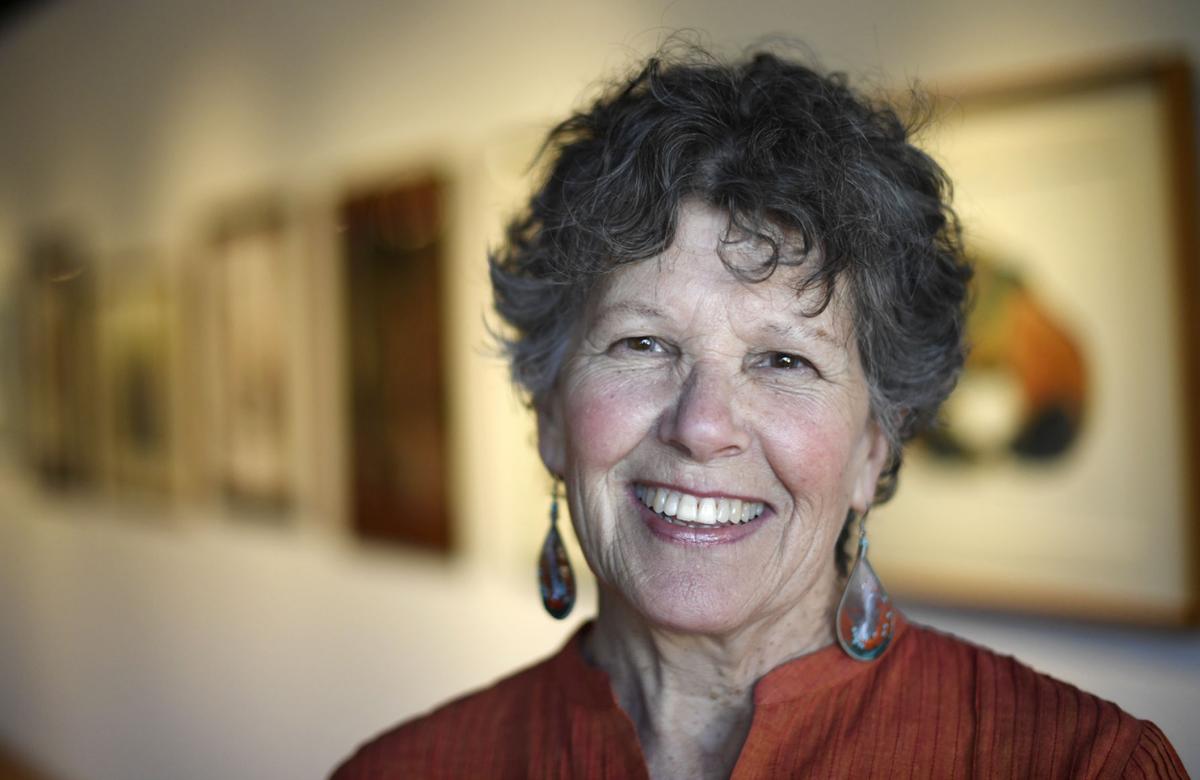 Janet McGahan's watercolors of bison, chickadees and other animals often can be seen at Rockin' Rudy's and the Good Food Store. Now, her paintings were recently on display at the Dana Gallery as part her "Root and Branch: Memoirs of 40 Years in Art.'' 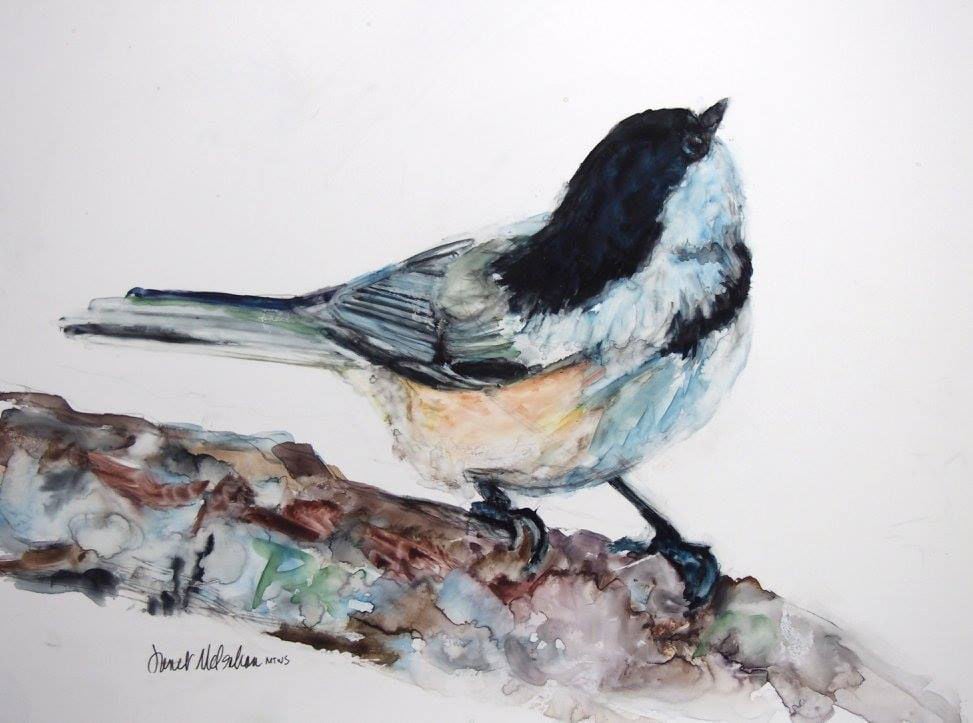 McGahan is well known around Missoula for her watercolors of wildlife.

Janet McGahan's watercolors of bison, chickadees and other animals often can be seen at Rockin' Rudy's and the Good Food Store. Now, her paintings were recently on display at the Dana Gallery as part her "Root and Branch: Memoirs of 40 Years in Art.''

McGahan is well known around Missoula for her watercolors of wildlife.

If you've browsed the gift cards at Rockin' Rudy's or the Good Food Store, you've probably seen Janet McGahan's watercolors of bison, chickadees and other animals. The forms are always representative, but the pools of color are sometimes impressionistic.

This style, just one that the 72 year old works in, was the sort of happy accident that artists pray for.

"If things hadn't happened the way they did, I don't even know if I'd have started watercolor," the longtime Arlee artist said.

In the early 1990s, she went to Yellowstone National Park as a chaperone for an eighth-grade class. While the students hiked, she sat down to sketch bison. She hadn't started adding color when they were called back to the bus. As they were driving away, she asked her son, Simon, to tell her what color the bison's backs were as they passed. He described them to her as she did a quick sketch.

A few weeks later, she decided to make another, bigger watercolor painting. She wet the image and dropped in color that could pool around. It somewhat resembled a cave painting, and she liked it. So did the Missoula Art Museum. It was selected for the annual Benefit Art Auction that year, the first time McGahan's work was picked.

Rudy Autio, the famed Missoula ceramicist, was interviewed on the TV news. "He was standing by my painting and he said that he liked it," she said. "I thought, 'Whoo-hoo! I'm going to do more of these.' "

That success was the inspiration for doing more watercolor, and has become a trademark for her, thanks to the cards.

She wonders what would have happened if she had more time back in Yellowstone that day, what kind of image she would've made.

"It would've been a lot tighter and less fresh."

Over the past 40 years of art, McGahan has worked in pen-and-ink, pastel, watercolor and oil. All of those mediums are represented in "Root and Branch: Memoirs of 40 Years in Art," an exhibition at the Dana Gallery, which gave her most of its spacious main showroom on North Higgins Avenue. There's an entire wall of "quick-draw" portraits, many of which she sketched at the Arlee Celebration. There are oil paintings of children and scenes, and a watercolor menagerie of grizzlies, birds and other animals.

McGahan has lived in Arlee for almost 50 years. She and her husband, Jerry McGahan, lived at his cabin in the Jocko River Bottom. They had two children from a previous marriage, and they added two more.

She and Jerry, a zoologist, were beekeepers. Their Old World Honey products were sold at the Good Food Store among other places. The seasonal nature of beekeeping kept them busy in the spring and summer, and provided more time for her art during the winter, along with family trips to Mexico.

Janet was interested in art from an early age. When she was 3 or 4, she remembers seeing her mother draw little sketches of people and thinking it was the best thing you could know how to do.

Raising children and running a business took priority, but she taught herself to draw in pencil and then pen and ink. She sold her first pieces in 1978 at the Arlee Celebration, held every Fourth of July.

Most of the drawings of the kids at the Dana are from the celebration. Some sketches are 35 to 45 years old — one child is now a grandfather.

The McGahans live just south of the celebration grounds. She'd walk to the grounds and set up an easel. She's always drawn children, and likes the way that it can make a child feel special, that someone believes they should be the subject of a piece of art.

In 1989, she was diagnosed with breast cancer and realized that she shouldn't postpone her passions.

"Something was niggling at me that said, 'You better start doing things that you're interested in,'" she said.

By 1992, she'd become frustrated with her portrait work and Jerry bought her private lessons with Tu Baixiong, a Chinese painter living in Missoula. They'd seen his MFA show on campus and admired his work — he was classically trained in the French academic style.

First, he asked if she was serious about learning to paint, and she was. For four months, she headed to his studio on South Third Street West, where he taught her to paint with pastels from square one. Basic shapes to complex ones. Black and white to color. One of her detailed student portraits in pastel, of a girl in National Geographic, is hanging at the Dana.

"By the time I was done with it, he said, 'Now there's nothing more to it. Everything's the same,' " she said, whether it was rendering animals, landscapes or people.

And watercolor was the same as oil — she taught herself the technique.

Several sections of the Dana show include her paintings of native birds like waxwings, often in vivid, shimmery color schemes, applied in motion-like streaks or delicate, layered pools. She often uses photographs taken by her husband Jerry, or the Craigheads, the family of pioneering naturalists. Some are portraits of injured birds she rescued.

Jerry, an expert on birds, told her that the eyes and the beak are the key to portraying them accurately. Jerry's main passion was writing, but he learned to paint starting at age 60, and she confesses that she was intimidated by his daily devotion to everything he did, until she lost him in October to advanced prostate cancer. He was 73.

Her cancer has returned and metastasized into her bones, but she said her treatment is holding it at bay. She feels like she's here and taking her chances like anyone else. She feels that the cancer is integrated into her life but doesn't define it. Her art and her grandchildren are distractions she absorbs herself in, reminders that she has a good life.

"It's really wonderful to go out in my studio and have it all fall away and get lost," she said.

More in Monday's Montanans are making a difference (19 of 43)

Janet McGahan's "Root and Branch: Memoirs of 40 Years in Art," will be on display at the Dana Gallery, 246 N. Higgins Ave. through Friday. Gallery hours are 10 a.m.-6 p.m. Monday-Friday, 10 a.m.-5 p.m. Saturday and 11 a.m.-4 p.m. Sunday. You also can view her art on her Facebook page, Janet McGahan Fine Art, or find it at Rockin' Rudy's, the Good Food Store and the Gray Wolf Peak Casino.

This story originally listed the incorrect number of children in the McGahan family.

Steady evolution is a recurring theme for Noah Lennox, who records under the name Panda Bear with his band, Animal Collective, the influential…

Monday's Montanans are making a difference

Monday's Montanan: Gibson Hartwell on the sound of the pedal steel