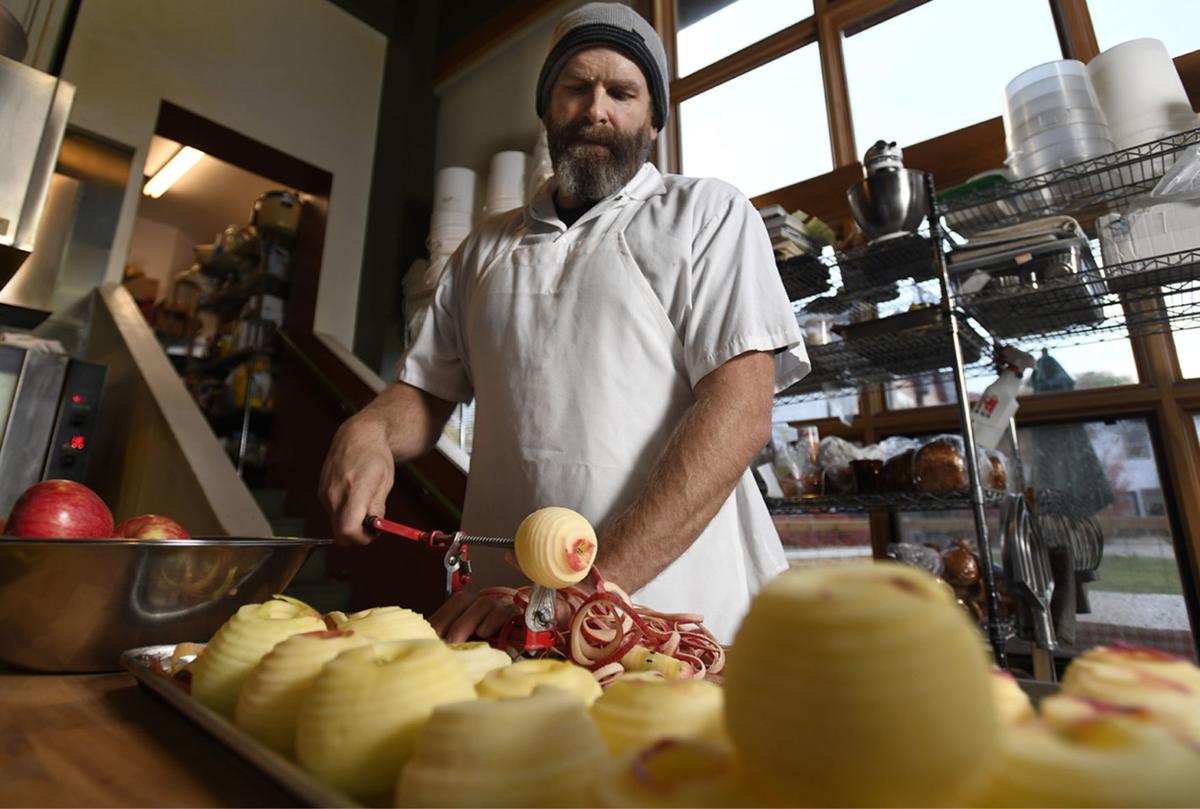 Jason McMackin peels apples in preparation for making apple crumble at Burns St. Bistro on Friday. McMackin is co-owner of the bistro and its head baker. 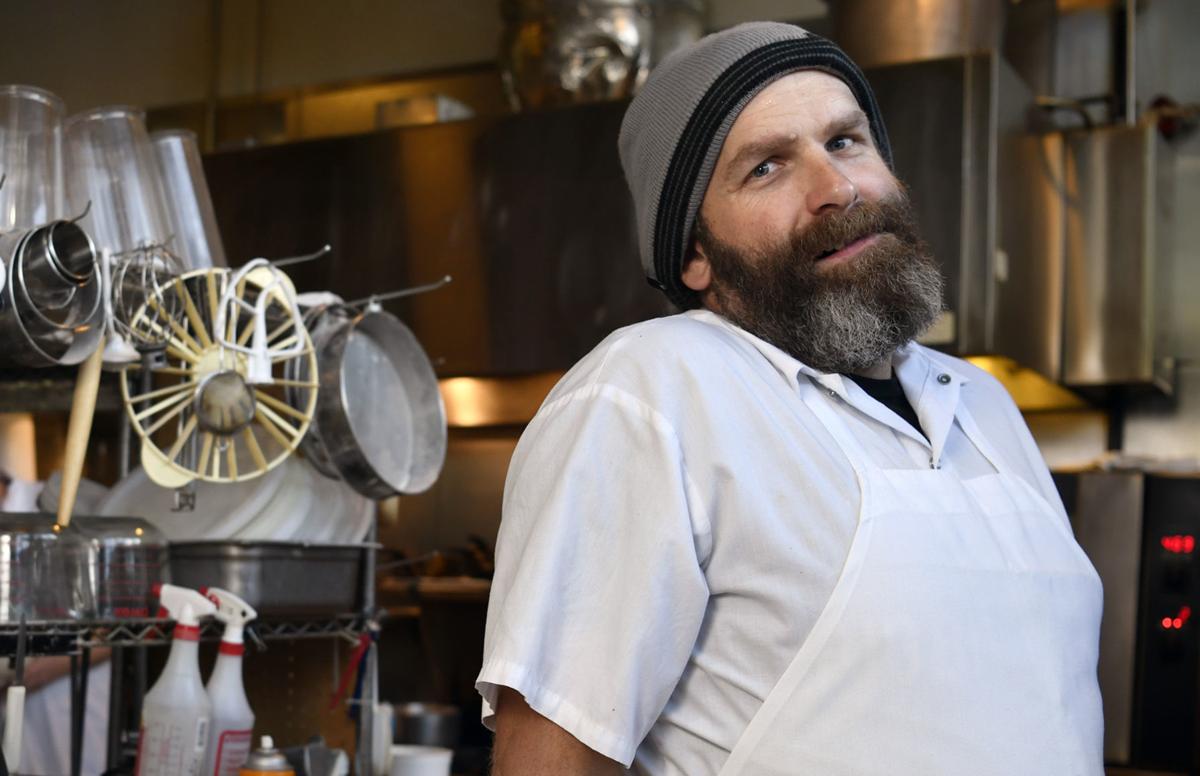 The Burns St. Bistro originated with some friends on a ski trip, hanging out in a yurt, drinking and talking about all the delicious food that you can't find in Missoula, the discussion occurring in a tone of voice they refer to as "yell-talking," which is roughly the same volume-to-rasp ratio that a WWE wrestler uses to taunt his opponent.

The "yell-talking" is important to mention, because it's a thing that Jason McMackin, the 45-year-old, 6-foot-3 bistro co-owner and head baker has been known to do on occasion for humorous or motivational effect. And like many times he's yell-talked, it led to doing something, whether it's starting a restaurant, raising thousands of dollars for a nonprofit, cajoling friends into volunteer work, or not wasting their own time.

"He's an action-oriented individual, and it's not lip service," said Walker Hunter, the bistro's co-owner and a friend of McMackin's going back to graduate school. Hunter recalls an annual concert, Missoula Rock Lotto, that McMackin organized for five years. Local musicians signed up and were quasi-randomly assembled into bands for a one-night show, with proceeds going to charity. At the 2017 concert, the last one, McMackin was emcee.

"It began with an appropriately toned offering to the crowd, and by the end of the night, he was yell-talking about the importance of supporting community, the importance of not just complaining about our problems, but acting locally to solve them," Hunter said.

The emcee tactics, and the endless wrangling to organize the concert, worked. It raised $10,000 for the Zootown Arts Community Center's kids rock camps.

McMackin and Hunter, a longtime chef at the Pearl Cafe, opened Burns St. Bistro in 2012 with friends Lagan Todd and Cameron Williams.

From the beginning, trying new things was a guiding philosophy, along with a sort of high-brow/low-brow sensibility that aligns with French country cooking.

"It's high-brow because someone decided that French is the high-brow language, so it must be fancy if it's French. It's like, no man, they're just stuffing a bird inside another animal and filling it with nuts. That's awesome," he said.

The bistro's specials, which can comprise 20 to 25 percent of brunch orders, come in surprising themes, such as Nordic food or "Game of Thrones."

"It's just what we do," McMackin said.

Specialty menu items mean specialty bread made in house, since "what we do here is so frustrating and mercurial sometimes" that they never considered going to outside bakeries with unusual requests, he said. "Don't let the cooks annoy Le Petit, just let them annoy me and I can live with that."

On Sundays, the staff get together for a planning meeting. Anyone, including front-of-house and dishwashers, can contribute ideas, along with cooks.

The themes can be "as simple as 'apples,' 'berries,' or 'Iranian" or whatever," he said. The timing could depend on the availability of ingredients or whether a dish needs a test run to fine-tune the flavors.

Affordable staples of brunch and lunch sit alongside the specials.

"We need to have basic things like veggie browns or biscuits or whatever, but let's boggle their minds with halibut cheeks," he said.

As head baker, McMackin has high standards, Hunter said. "He also brings a lot of energy into the room, with his role here as one of the owners, and his baking is top notch."

McMackin grew up in Silverton, Oregon, a small town with a convenient location near the Cascade Mountains and an hour's drive from Portland, where he and his friends could sneak away.

"We used to — obviously — lie that we were spending the night and then go to rock shows in Portland," he said.

He learned the bass, which he plays these days in a tribute act called Close, But No Seger. Other bands over the years include Blood Factor 5, the Glass Spiders and Total Combined Weight.

By the time McMackin was 21, the economy in Oregon had sunk. With few jobs available, he enlisted in the Navy. Based in Virginia Beach, he served as a radioman, second class, and went to Europe frequently to train with former Soviet states and NATO partners. His time in the service fell squarely between wars in the Mideast, which meant free time in Europe to explore, eat and party.

He learned to cook at an early age, weaned on 1980s PBS shows from Martin Yan to Julia Child, and isn't afraid to try to reverse-engineer a recipe. If, say, they'd return to Virginia Beach and couldn't find gyros anywhere, he'd experiment to figure out how to make pitas himself.

After the service, McMackin enrolled at Mesa State College in Grand Junction, Colorado. He picked the desert for the mountain biking, and studied English, a field he pursued further when he moved to Missoula in 2004 to enroll in the University of Montana's creative writing program.

Chad Dundas, a Missoula native, current resident and nationally published novelist ("Champion of the World"), recalls first talking with McMackin at a party at the start of graduate school.

"Like a lot of people upon meeting the guy, I was taken aback. Here's this huge person with a huge personality and an extremely loud voice," Dundas said.

The two, with mutual interests in punk, wrestling and literature, became close friends.

McMackin describes his own style of writing as "dudes doing stuff" with the potential for very bad things to happen. "Unpleasant, very unpleasant. Funny just so you could be unpleasant later," he said.

"There's a certain age group of writer dudes who probably got caught up in Cormac McCarthy and 'Jesus' Son' by Denis Johnson, and I definitely — not purposely — but definitely was trying to combine those things, which is obviously a fool's errand."

After graduation, McMackin tried different jobs before giving up on the low Missoula wages. He worked for three years in the oil fields around Williston, North Dakota. He was still cooking: He recalls making Thanksgiving dinner for his co-workers on a two-burner hotel-room kitchen stove in Baker.

After saving enough money to buy a house, he quit oil-patch work and was looking for something new when he and his friends took that ski trip.

Between work and family — he and his wife, Alison Gadbow, have a 4-year-old son named Wells — McMackin fits in hours of mountain biking a week on a frame he calls "cartoon-sized," with the seat post raised as high as can be. Hunter said on the trail he's "one of the most positive people, even in some fairly dicey situations."

Volunteer work bleeds over into recreation and business. His biking group includes a mandatory 12 hours of community service. During the winter he'll bring the bistro staff over to the Food Bank to work a short shift.

McMackin doesn't like pessimistic talk and the time it occupies, especially from people who claim they're busy but spend too much time online.

That thought came during an impromptu motivational speech with some colorful phrasing that, with his gruff delivery, would work for an athletic coach or a drill instructor.

Dundas said he likes to use McMackin as "a litmus test for people."

"Yeah, he can be overbearing and intimidating and like, the loudest person you've ever met in your life," he wrote, but many people come around when they see the energy level and commitment.

"He probably wants to keep it secret, but he's a sensitive person with big feelings and a lot of insightful thoughts about the world. He's also great to have around if you need to move a couch."

Giving back to your community can take many forms, including kicking a suspect individual out of a hardcore show. Once, McMackin and Dundas were downstairs at the Elks, and there was "a big, skinhead-looking guy who was terrorizing people in the pits," Dundas wrote in a message.

"This guy was pretty scary — tattoos and studs on his jacket and big boots and all that. He was trying to start fights and bullying people in front of the stage. People just seemed scared to do anything about it and were giving him a wide berth. But when McMackin saw the guy, he just calmly set down his drink, strode into the middle of the pit and seized the guy by the scruff of his neck.

"In his big, scary monster voice he says, 'You’re coming with me!' and immediately the guy just melted. He went from being this tough bully to a tiny kid just instantly. McMackin marched him outside and pushed him out the door and that was the last we saw of the guy. Problem solved."

Celebrities on what they've missed this awards season

Celebrities on what they've missed this awards season

Missoula College will shutter its long running catering operation, and the director of Culinary Arts will step down as department chair, accor…

Lily Anderson looked down at her latest creation and pursed her lips.

When news hit that President Donald Trump would hold a rally in lefty Missoula, social media erupted about the best way to respond.

President Donald Trump is making his third trip to Montana Thursday to campaign on behalf of Republicans in the midterm election, an unheard o…

Artists around western Montana received nods this week with the announcement of the Governor's Arts Awards.

Jen Fowler looked the part of a physicist when she arrived at the University Center Theatre on Thursday. Wearing a light-blue jacket emblazone…

Gone but not tostado: 10-year ride at Taco Sano ends for Missoula couple

Maybe, just maybe, there were a few tears shed on Friday as the long and distinguished careers of Amy Doughten and Ethan Stovall at Taco Sano …

Jason McMackin peels apples in preparation for making apple crumble at Burns St. Bistro on Friday. McMackin is co-owner of the bistro and its head baker.