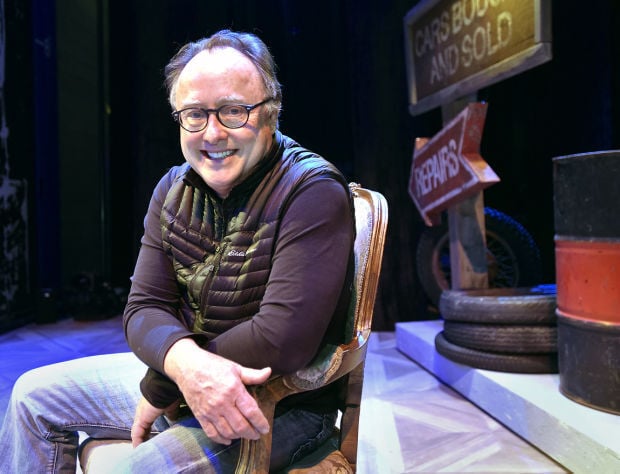 Greg Johnson, the former artistic director of the Montana Repertory Theatre, died of COVID-19 in New Orleans last week. He was 71 years old. 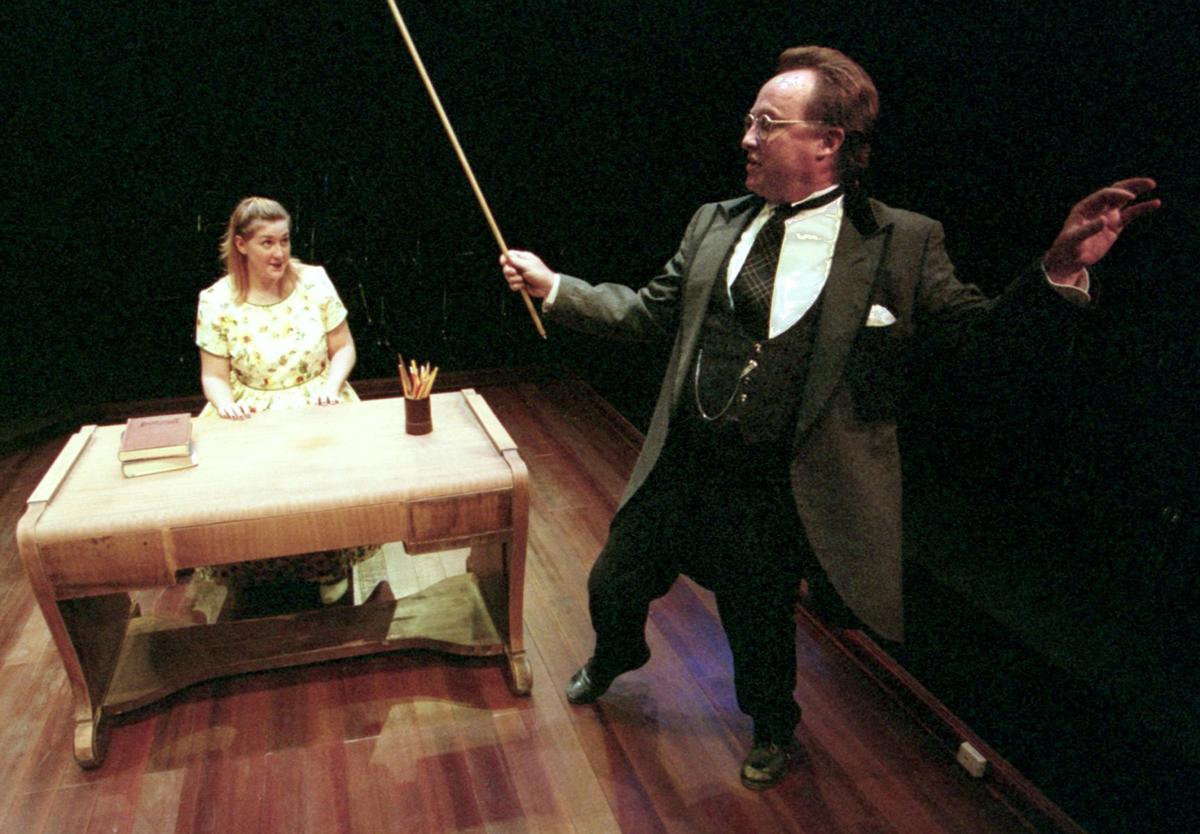 Greg Johnson, seen with Kate Cross, acted in a 1997 production of "The Lesson" at the University of Montana. 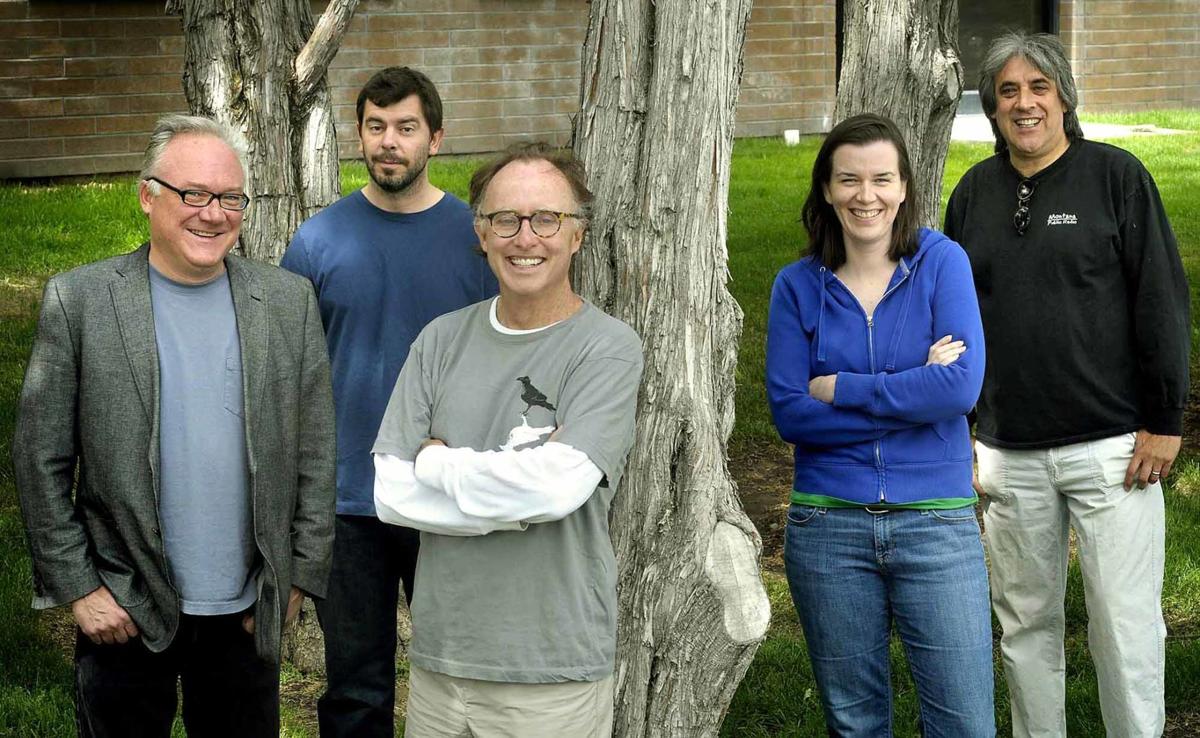 One of Johnson's proudest accomplishments was co-founding the Colony, an annual writers gathering. Seen here, from left, are Roger Hedden, Andy Greenfield, Greg Johnson, Salina Chatlain and Howard Kingston at the 2010 Colony.

A theatrical mentor and director who, even behind the scenes, was a character larger than life: Friends, colleagues and former students remembered Greg Johnson as a passionate advocate for his art form, always pushing for the best show possible.

Tributes from around the country flooded social media over the weekend as news spread that Johnson, the longtime former artistic director of the Montana Repertory Theatre, had died from COVID-19. Johnson, who led the Rep from 1990 to 2018, passed away on Friday, Jan. 8, in New Orleans, where he’d been living after retirement. He was 71 years old.

Over his tenure, the Rep, a professional theater in residence at the University of Montana, built up an annual national tour of classic American plays, which gave students the chance to work with card-carrying professionals in front of out-of-state audiences.

Johnson, who called leading the Rep “a great gift in my life,” brought the company to a higher level and sustained it for over 25 years, a span of time in which many theater companies around the country folded or ran out of steam, said Roger Hedden, a playwright and longtime friend.

He also co-founded the Colony, an annual writers gathering; staged local productions and taught several generations of theater students at the University of Montana.

“He loved theater more than anyone I ever met,” Hedden said.

Johnson had an “irrepressible spirit, and twinkle in his eye, and [was] game for everything,” said Susan Hay Patrick, a close friend.

His wife, Anita Vatshell, a playwright, said that since the pandemic, the two had been very cautious. After he tested positive in mid-December, his condition worsened and he was hospitalized and intubated. He was able to express his final wishes and told Vatshell that “he’s had a really full life,” and that “he had no regrets.” She was with him when he died.

Johnson was born in New York City and grew up in the New Jersey suburbs. He saw his first Broadway show when he was 8 years old “and never looked back,” Vatshell said.

“His passion was instantaneous, and it just never wavered,” she said.

He studied theater at New York University, and spent almost 20 years working professionally in New York as an actor, stage manager and director. His Broadway credits include “Biloxi Blues,” and touring productions of that show, plus “Steel Magnolias” and “Crimes of the Heart.”

That “long apprenticeship” in New York taught Johnson “all the tricks” from an older generation of professionals, giving him experience that he brought out West to lead a company, Hedden said.

He came to Montana initially to co-found a playwriting conference in Bigfork. In an interview before his retirement, he said he ventured here without any expectations in mind. After he was hired on at the Rep, though, he never left.

“He said he never missed New York after he moved here,” said Hay Patrick, the chief executive officer of the United Way of Missoula County.

“I fell in love with Missoula that first year,” he said in 2017. “The people, the mountains, the ease with which people smile at you and say hello. To a city kid, that was pretty seductive.”

The Rep provided Johnson with a company and a stage to make work, free from the scramble of New York, where the pace is fast and jockeying for a venue is constant concern. Instead of pursuing theater elsewhere, Johnson found ways to bring Montana to the outside, whether through tours or inviting collaborators here.

He expanded the touring productions around the West, and then nationally, a feat they pulled off in part through smart selection of plays. After a successful 1997-98 tour, “To Kill A Mockingbird” became the company’s signature production, and a model for countrywide tours for the years to come. They staged it again in 2009-10, and in 2017 they brought it to China.

Sending the plays through the South and East Coast offered larger audiences and higher ticket prices, both of which helped build up the Rep. The company’s mission statement became “Great American stories” — works by Tennessee Williams, Arthur Miller, Neil Simon and more. They also produced new plays by writers like Ron Fitzgerald, Kevin KickingWoman and Jillian Campana. Through the annual Educational Outreach Tour, they gave children around Montana a first introduction to live theater through specially written original productions.

As the industry shifted in favor of musicals or comedies, touring plays from the canon could become dicier financially, but Johnson thought the risk was worthwhile. In 2016, they toured Arthur Miller’s post-war family drama “All My Sons.”

The other half of his job was teaching at UM. Mike Monsos, the director of the School of Theatre and Dance, said they developed a beneficial relationship between company and campus that doesn’t always play out the same at other universities, often receiving visitors who wanted to emulate their model.

Johnson had high expectations for his actors. Monsos said he wanted to instill a professional sense of craft and “would push them quite hard to achieve a level that he thought they should be striving for and reaching for.”

When you’re directing theater, “you’re pushing the ship off the dock,” Hedden said, and there’s no ability to fix anything in post-production like in a film. “He really believed that everyone should do the very best job that you can, and that part of his job was putting people in the position where they could do great work,” he said.

“He was probably the single most influential teacher in my life,” said Salina Chatlain, an actor who had Johnson as a professor, then worked for him for 12 years at the Rep as assistant and also Colony producer. She said he came from an old-school East Coast background that was sometimes “fire and brimstone” and not for everyone, but “had a big heart, and if he was in your corner” then he would sing your praises publicly.

He insistently pushed for Chatlain to get the sole part as a witch in a one-person play “Broomstick” as part of a rolling world premiere. For one scene, he wanted her to learn how to peel an apple in a single cut while keeping her eyes on the audience. (She did, and still can.)

He and Vatshell worked on a production of her play, “Front Street” here in Missoula. She said that with him, “the bar was high, and he knew that for something really to work, you gotta set your heights higher than where some of us may live.”

With an East Coast accent that he never lost, he was never hesitant to give a speech at a curtain call, or speak on behalf of theater — pushing for funding in Helena, lobbying donors, networking and “making friends and creating a community of people” who would support the Rep, Chatlain said.

The impulse to put on a show was strong even when things weren’t running smoothly. Once in New York, on the set of a tech rehearsal that was “going like a nightmare,” as they often can, he told Hedden that he’d rather be anywhere else — except he wouldn’t want to be anywhere else.

Outside of the Rep’s national tours, they staged contemporary plays here in Missoula at smaller venues like the Crystal Theatre. For instance, the Rep produced a play, “Leveling Up,” by Deborah Zoe Laufer, about a gamer who’s recruited as a drone pilot and suffers ensuing PTSD.

Monsos said “there was always this energy from him to try to find new and innovative ways to connect the community, to extend the outreach” of the Rep every year.

Johnson was a presence at art events of all kinds including visual arts and dance. It wasn’t uncommon to see him in the audience for bootstrapped indie productions around town. Vatshell said he had an “appreciation for the scrappiness” that theater artists summon for the sake of putting on a show.

He co-founded the Missoula Colony, an annual playwrights gathering, in 1996 with Michael Murphy and Marsha Norman, a Pulitzer Prize winner. They brought writers to Missoula during the summer to work on their craft away from the pressures of daily life. Students and local actors could perform staged readings of works in progress and get valuable insights and experience. Playwrights often built national careers out of the work they did there.

Johnson made many trips to New Orleans before moving permanently, and dove right into a big-city theater scene, where there’s a surplus of art, from the straight-forward to more experimental and off-beat works.

“He was attracted to talent, attracted to beautiful things,” like great theater and music, and was meeting new people, writing for personal projects, doing workshops and directing, Vatshell said.

“He was a lot of fun to be around, because he had so much vibrancy, of wanting to get out and be a part of anything that was going on. It really lit him up,” she said.

He is survived by Vatshell and her daughters, Lesley Kuennen of New Orleans and Alexandra Kuennen of Missoula.

They’re planning to have a small outdoor acknowledgment for him in New Orleans. He wanted his ashes to be brought to Missoula, which could happen in the spring or summer as conditions allow, and will hopefully they can have small gatherings like he would have wanted.

He lived for the stage and for live theater, Vatshell said, and the only way to do him justice would be in person.

Writer finds conflict and beauty in Bitterroot in new novel

Maxim Loskutoff, a writer who grew up in Missoula, long wanted to write a story set in the Bitterroot Valley.

Literary bars of Missoula, past and present

Missoula’s still a writer’s town, where in normal times you might notice published authors hunched over laptops in a coffee shop.

The Missoula Art Museum’s annual art auction is more inclusive and multi-genre than ever before.

The Big Sky Documentary Film Festival rolled out its 2021 lineup Friday, with 27 features and 50 short films that will screen virtually Feb. 19-28.

Service for Rep's Greg Johnson is this Friday

The service celebrating the life of Greg Johnson, the retired longtime artistic director of the Montana Repertory Theatre, is Friday, July 16,…

Greg Johnson, the former artistic director of the Montana Repertory Theatre, died of COVID-19 in New Orleans last week. He was 71 years old.

Greg Johnson, seen with Kate Cross, acted in a 1997 production of "The Lesson" at the University of Montana.

One of Johnson's proudest accomplishments was co-founding the Colony, an annual writers gathering. Seen here, from left, are Roger Hedden, Andy Greenfield, Greg Johnson, Salina Chatlain and Howard Kingston at the 2010 Colony.