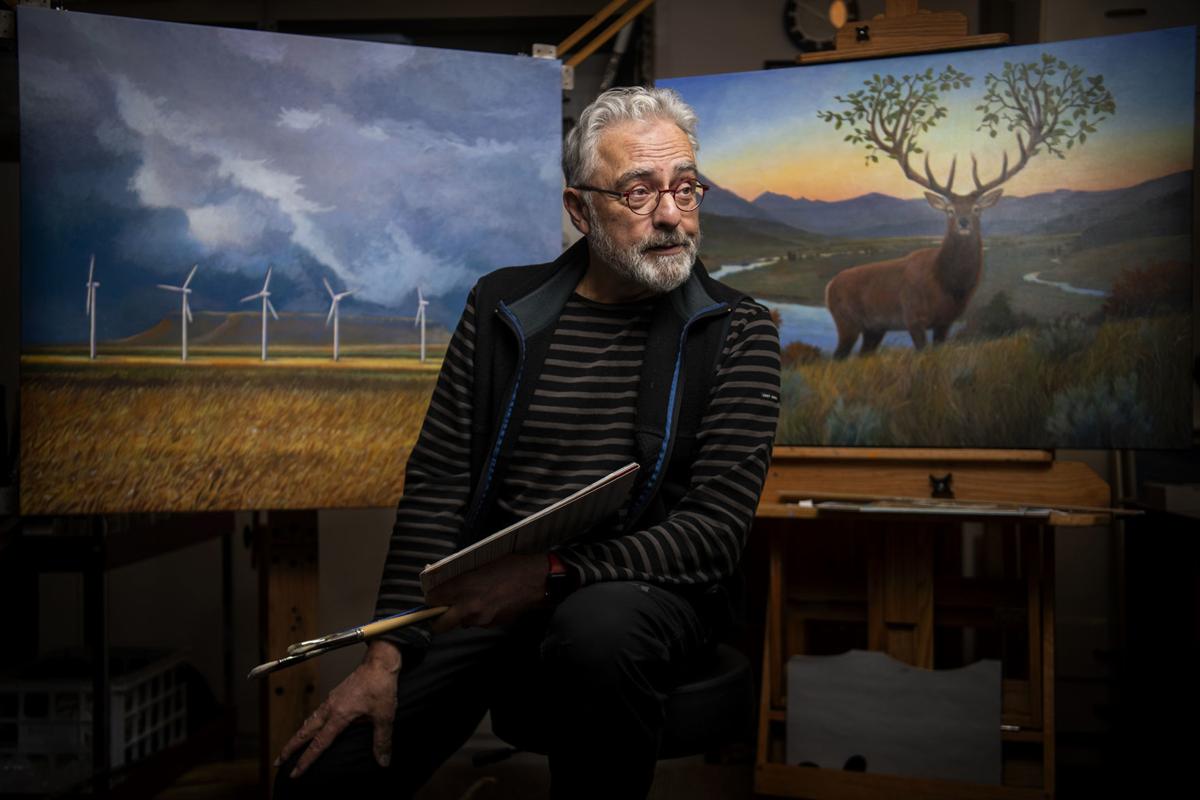 Renowned Missoula artist Monte Dolack will have a solo exhibition 'Monte Dolack: The Artist's Nature' which illustrates his connection to the natural world. The exhibition opens Friday at 5:30 p.m. in the PAR/TV Center on the University of Montana campus. 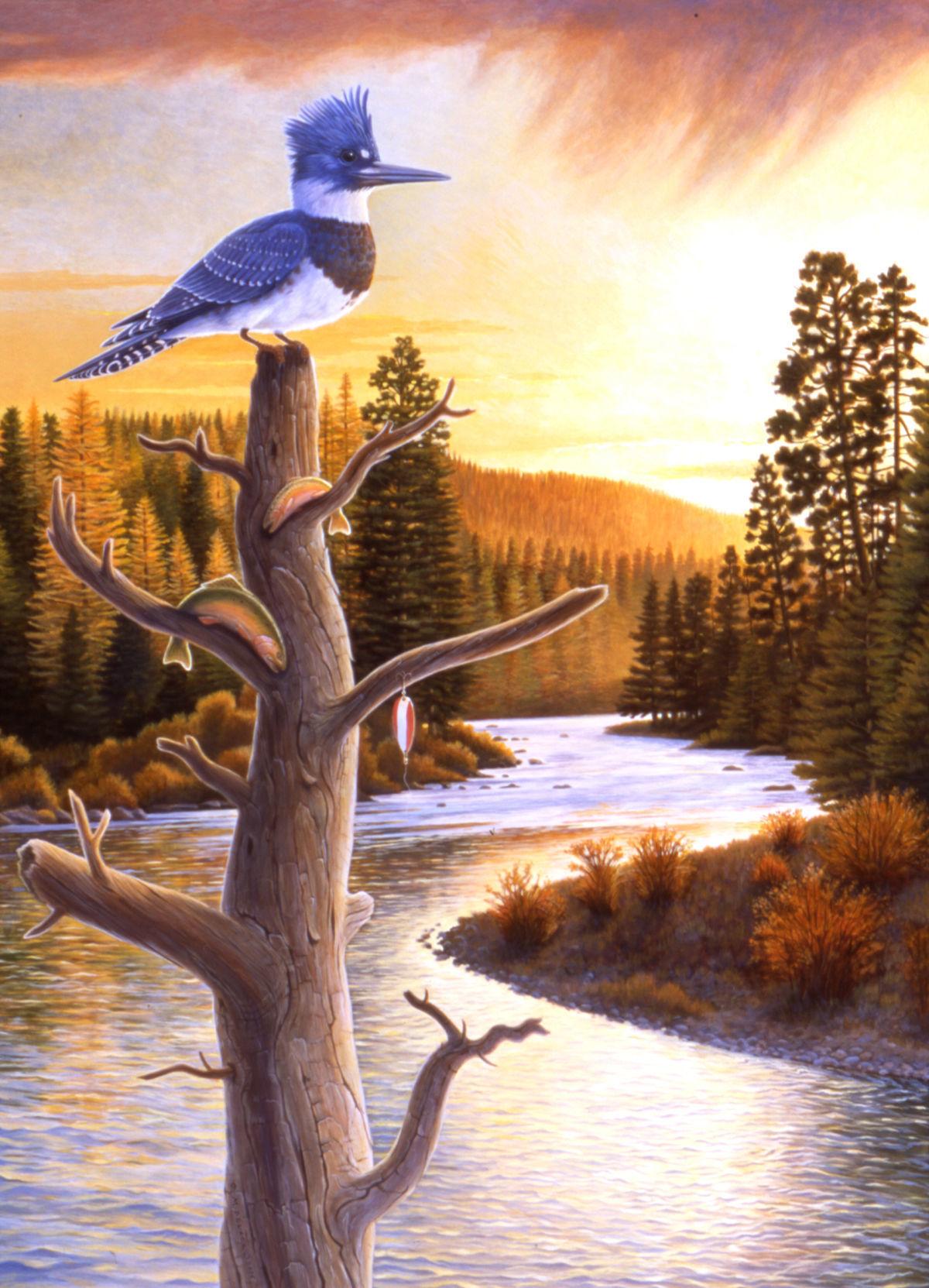 "Monte Dolack: The Artist's Nature" is a major exhibition opening at the Montana Museum of Art and Culture this Friday. The show, which will take up both galleries, examines the Missoula artist's connection to nature. Seen here is "Kingfisher." 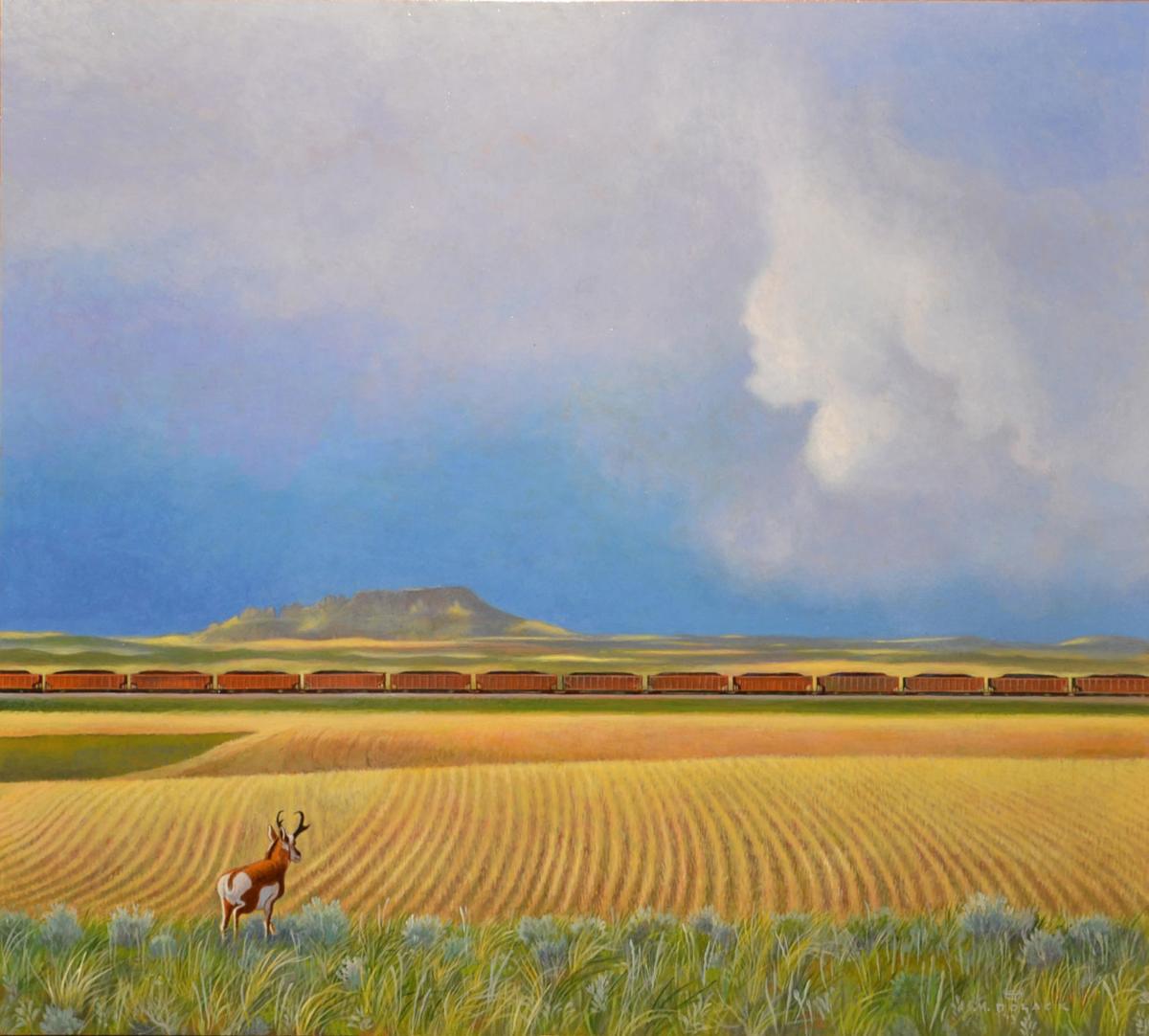 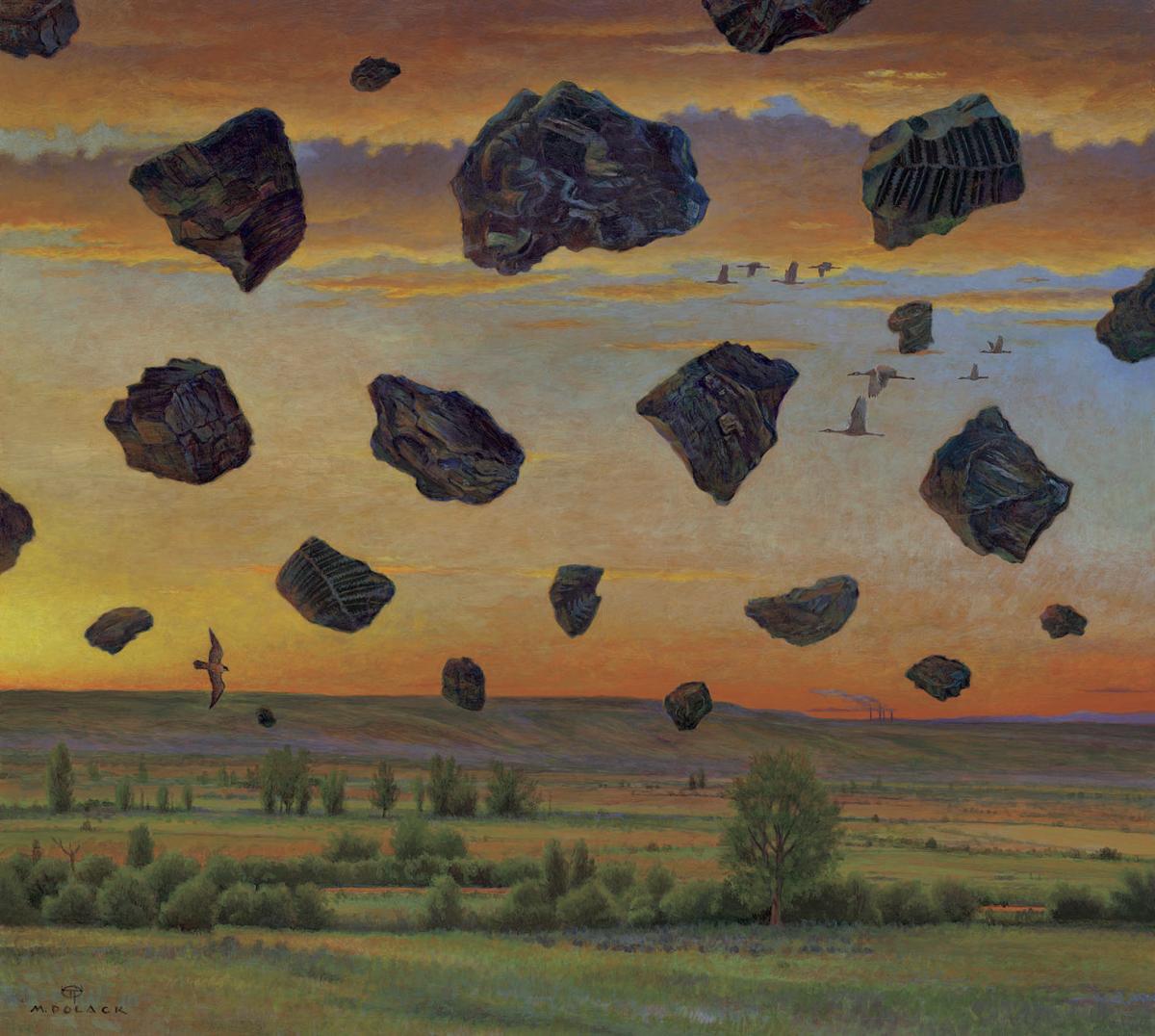 "Suspension of Belief" (2013, acrylic on copper panel, 18 by 20 inches) was made for "Altered State," an exhibition at the Holter Museum of Art in Helena. 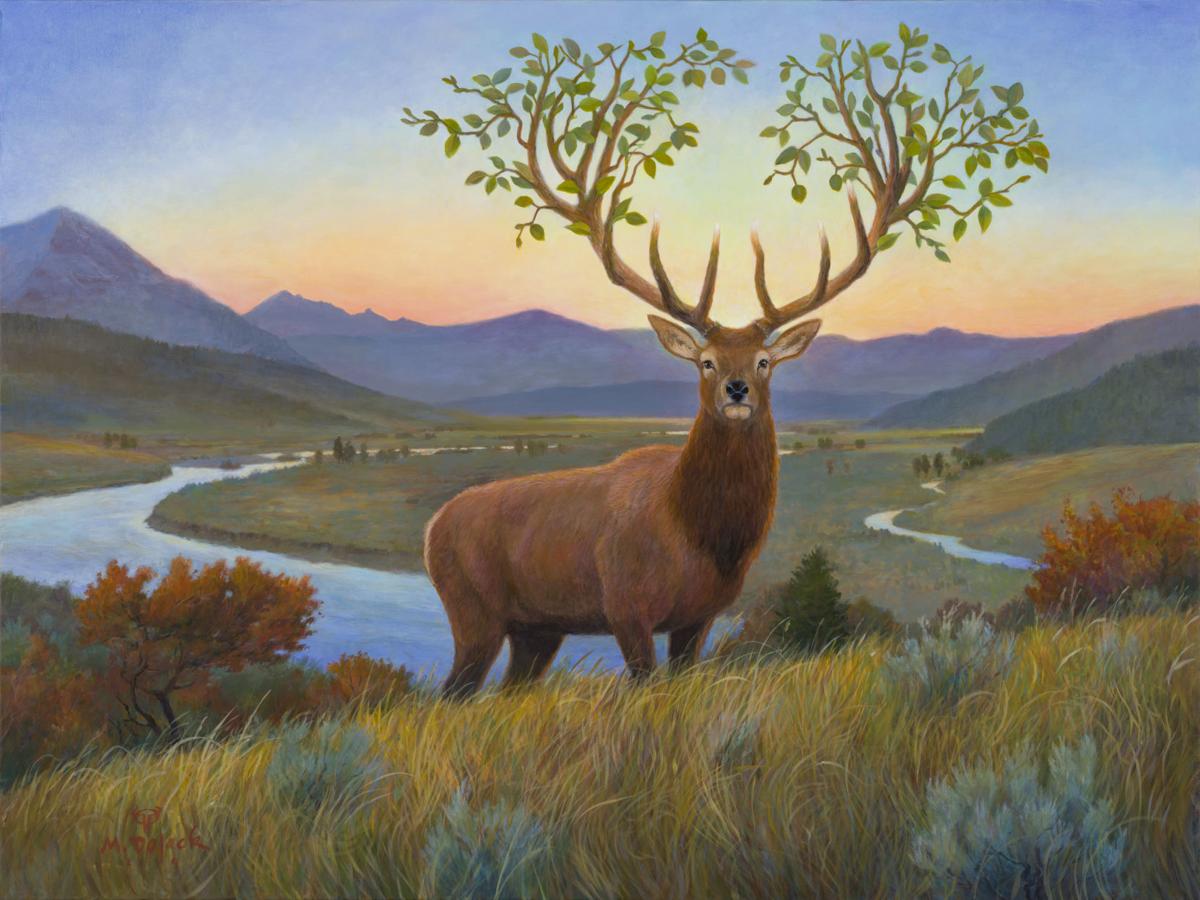 Renowned Missoula artist Monte Dolack will have a solo exhibition 'Monte Dolack: The Artist's Nature' which illustrates his connection to the natural world. The exhibition opens Friday at 5:30 p.m. in the PAR/TV Center on the University of Montana campus.

"Monte Dolack: The Artist's Nature" is a major exhibition opening at the Montana Museum of Art and Culture this Friday. The show, which will take up both galleries, examines the Missoula artist's connection to nature. Seen here is "Kingfisher."

"Suspension of Belief" (2013, acrylic on copper panel, 18 by 20 inches) was made for "Altered State," an exhibition at the Holter Museum of Art in Helena.

It might not seem as though Monte Dolack, who turns 70 this year and is perhaps the most famous artist from Montana, needs a reintroduction to the public.

A new exhibition, which will hang in both of the Montana Museum of Art and Culture's two galleries for six months, will attempt to give people a different view on Dolack.

Since Dolack opened his first studio in Missoula in 1974, he developed a deep body of graphic design work and posters, more than 200 by his estimate, alongside his personal work. With that depth of material to draw from, the museum decided to home in on the latter, with a selection of more than 50 original paintings, posters and prints.

"What we've tried to do in this exhibition is capture his evolution over the last two decades, and particularly focus on the theme of his relationship to the environment and to nature, which I think he's really elaborated and deepened," said Rafael Chacon, the MMAC's director.

For that reason, you won't see some of the more whimsical, surrealist visions that he's known for, such as the Invaders Series, where animals take over human domestic spaces, or his pop-culture designs, such as posters for Aber Day keggers or logos for businesses like Butterfly Herbs.

For his part, Dolack is eager to see many of these original paintings all in one exhibition. Since 2015, when he closed his downtown gallery after a 22-year run, many people assumed he retired or slowed down.

"If you're serious about making art you never retire. You just move through different phases. I switched to having this work space," he said recently at his home studio in East Missoula.

Resting on easels were two pieces marked for delivery to the museum: "Polar Vortex," in which he rendered a polar bear, looking a little anemic and scraggly, on an isolated floe marooned far from melting icecaps and an oil rig. Nearby is a sunnier piece, "Equinox," showing an elk, its rack transformed into branches with blooming leaves, set before a classic-looking Montana sunset. "Equinox," just completed, belongs to a private collector. While he's stayed busy in what many assumed was a retirement, the work is often headed to private collections and he hasn't built up enough for a solo exhibition.

That light surrealism is the Dolack that many viewers are most familiar with, and when he discusses the effect he wants his art to have on a viewer, he's filled with optimism.

"When someone walks into the room, they see it and they're attracted to it the way a butterfly might be attracted to a flower, you know? You walk toward it, it's intriguing, and then when you get closer another world kind of opens up," he said. It might be the narrative, or the brushstrokes that can only be appreciated in person instead of a print.

Yet "Polar Vortex" hints at the more hardened view of the world as it's been affected by us.

"Humans are like a plague on the planet," he said, punctuated by a somewhat resigned laugh. "Sorry, but we are. But I think especially my generation really needs to step up, you know, I mean handing off the baton to younger people, 'Well, sorry.' "

"I keep thinking I need to make paintings that can reach … everybody. Not just people that agree with me," he said.

Dolack grew up in Great Falls, where his father worked in the copper refinery. Dolack, too, worked there in the summers during college, first at Montana State University and then the University of Montana.

He loves fishing and hiking, and grew up with the marks of the industrial processes on the air, like descending flecks of debris, and saw the discharges from the plant going right into the river.

"The effects of growing up around the smelter and degraded water and landscape" seeped into his mind.

He initially began making commercial work to pay his rent, which eventually grew into a massive archive of posters and prints for groups like the Nature Conservancy or Trout Unlimited that seek his name recognition to help raise money for their causes.

"At a certain point I was just doing anything that came along. As long as I thought it was a good thing, I could believe in it myself. Even though you could call it commercial art, I would not take on things that I didn't feel were groups or individuals or companies that I felt good about," he said.

After he reached a certain level of success with his commercial work, it freed him up for more time with his personal work, which can be environmentally themed, surreal, or sometimes straight contemplative landscape, painted with the help of photo research or sometimes on-site studies.

While he's traveled far, from Europe to South America to Antarctica, and documented those travels in his work, Montana has always remained his home. He almost moved a number of times. Maybe Seattle, the Bay Area, Los Angeles or New York.

"I'd come back here and I was so close to wild places, I just didn't want to move to a big city," he said.

He remained here in Missoula, and thanks to his longevity is a defining Montana artist to people here and outside.

"I had such great support for what I was doing, and the community was/is a really good one," he said.

That deep knowledge of his home state is visible in the show, Chacon said.

"He clearly articulates the breadth and beauty of the place, the physical landscape, but he also has a deep sense of history, connection to this place," he said. Dolack also shows how the landscape is "changing dramatically, and in some cases radically, and he still insists that the world around us is a beautiful, awe-inspiring place," he said.

Jeremy Canwell, the MMAC's curator, said he sees two different things happening in Dolack's work. There are pieces like the "Invaders," or perhaps a nature scene, where the wildlife seems tamed.

"It's an example of his tendency to impose the domesticating will on a natural world, which is really indifferent to us when it comes down to it." In other pictures, such as a serene landscape, he includes animals but the "natural environment competes with that captivity. And that's the tension that I think is there in his best work."

Those two come together in some of the paintings in the new exhibition, such as "Coal Train," where a long line of rail cars bearing fossil fuels cuts across an otherwise wild area.

He's "winnowing down his vocabulary" and can "at the same time address in serious and stark terms environmental devastation and awe in the face of the wildness he sees around him."

The exhibition, which is up for half a year, will provide plenty of time to re-investigate his work. Later this year, a new book with more than 200 images, accompanied by essays written by Dolack, will be published, too.

"We're trying to give as much opportunity for people to experience his art and to get to know him if they don't know him well and to sort of re-encounter him through a slightly different lens," Chacon said.

"Monte Dolack: The Artist's Nature," opens at the Montana Museum of Art and Culture's Paxson and Meloy galleries on Friday, Jan. 17, from 5:30-7 p.m. It's on view through June 20.

Rep reimagines 'War of the Worlds' for 2020 audience, live on stage

At a recent rehearsal in the Masquer Theatre, five cast members darted around the stage, arrayed with old-fashioned equipment: microphones, a …