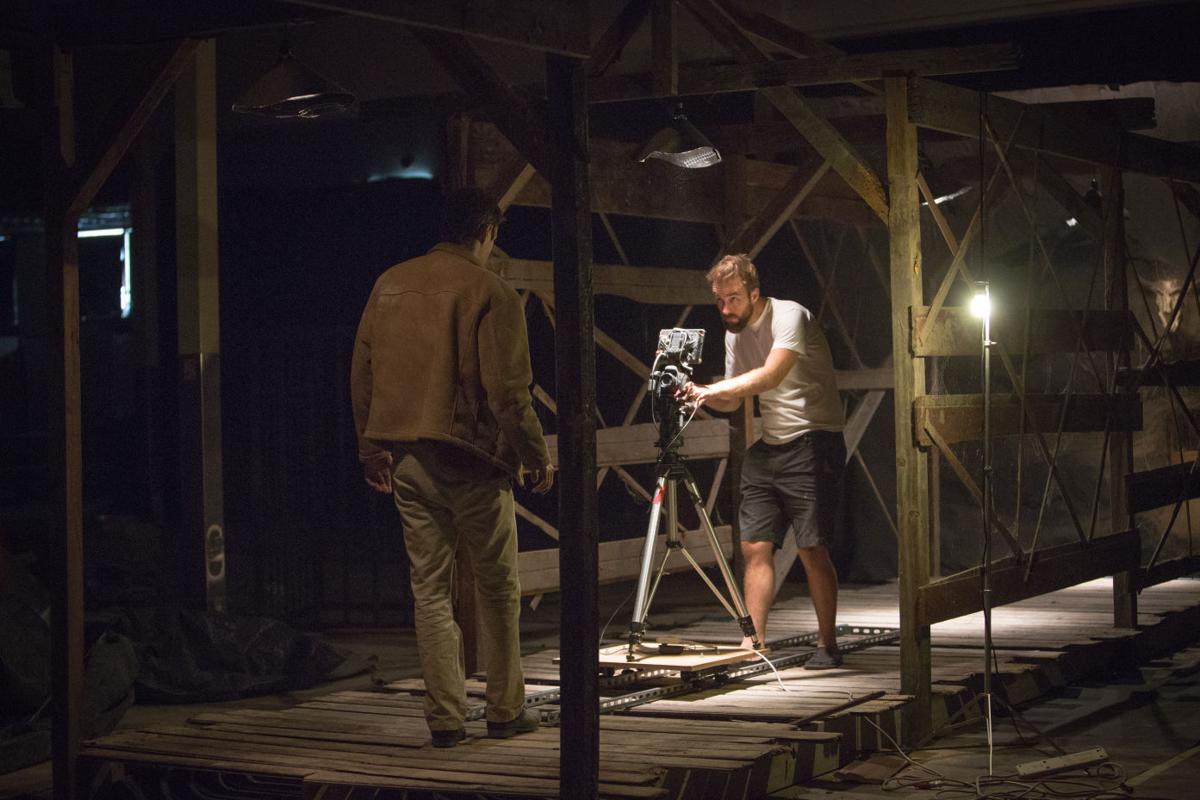 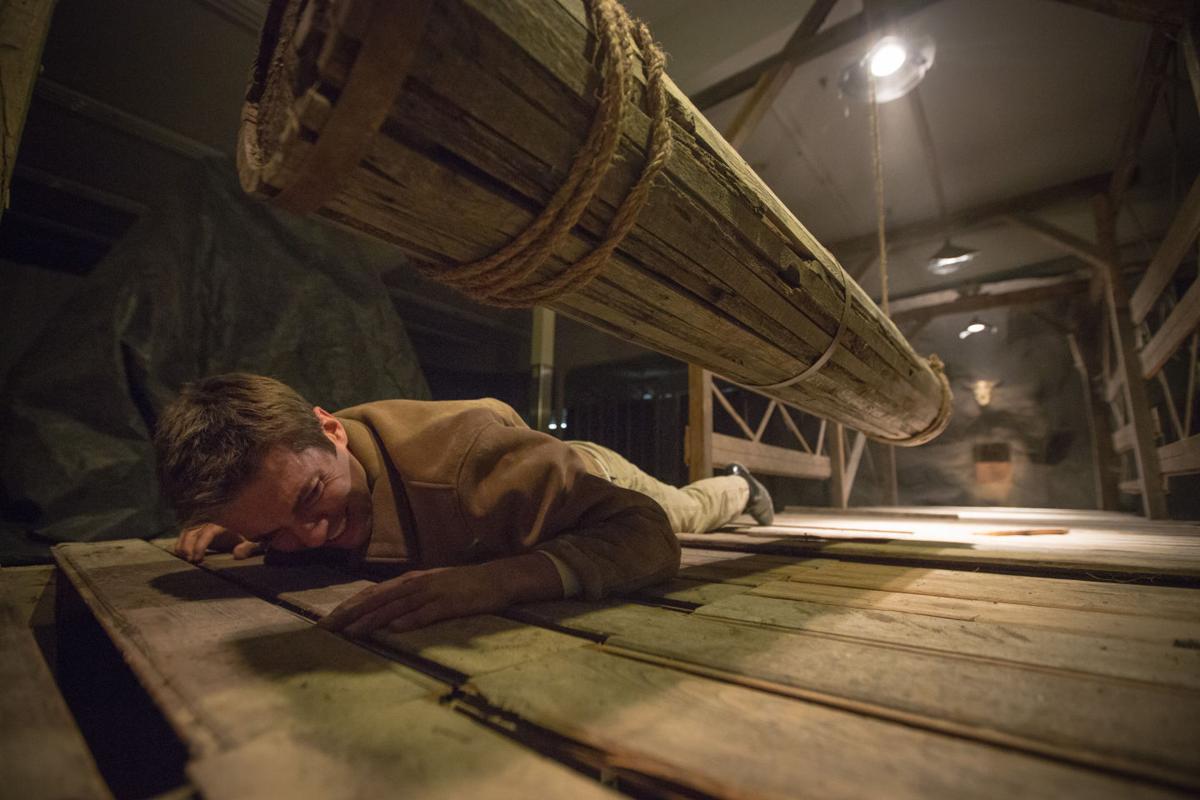 We've all heard the story about the writer who labors for years on a book. A filmmaker, 25 some actors with speaking roles and 200 on background who spent six years on a single movie, offers a different twist.

That's what's happened with "Saving for the Day," a full-length movie by Missoula filmmaker John Nilles.

He and his cast and crew have shot "Saving for the Day" around familiar Missoula locales on their weekends, logging thousands of hours for an adventure tale that incorporates about 15 different genres, from comedy to romance to fantasy to horror and more.

Serving as the protagonist of "Saving for the Day" is Joe Bell, a penny-pinching accountant. "He's not living his life ... he's waiting for life to happen," Nilles said.

A clock-maker he's come across gives him a gift: a chest filled with treasure with a satchel, which sets the homebody on a series of adventures.

"It's that classic story of the journey of the hero," said lead actor Andy Shirtliff.

Joe embarks on a series of exploits to find the key, which is eventually located around the neck of a young woman, Abbey (Lindsey Zacharisen). Joe has to choose between the possible treasure or possible love with Abbey, an archaeologist working on a project underneath the city.

In classic do-it-yourself fashion, Nilles has served as writer, director, cinematographer. He's edited the movie as they shot, and has a rough cut completed.

Nilles hopes to raise $33,000 to shoot one last scene and pay for the final phases of post-production, including sound design and mixing, the score, color correction and more. He's raising the money on Seed and Spark, a curated online-fundraising site dedicated to movies.

Nilles, who pays his bills by shooting commercial projects, wanted to make something ambitious. So the fan of Westerns, science-fiction, art-house and more roped as many genres as he could into his script.

So what happens after Joe meets Abbey? A kidnapping for one. An "Indiana Jones"-homage sequence where Joe has to cross a bridge booby-trapped with saw blades, flames and more. The bridge in question was 60 feet long and 8-feet high. It was shot in the old Safeway building, which they were given permission to use as a set before it was torn down. Production designer Sarah Meismer, with help from Nilles' father, a carpenter, built the bridge with salvaged building materials scored at Home ReSource.

And then there's chases by car and bus, featuring actors Ric Parnell ("This is Spinal Tap") and Jeff Medley (numerous local theater and film productions).

Nilles' script also cycles through other genres, such as a "castle siege" fantasy sequence. A stolen item creates the opportunity for a film noir atmosphere, and a covert mission at a ball (shot in the Florence Hotel ballroom) ties in spy-movie tropes and Hitchcock.

Nilles believes he can use as many genres as he likes, as long as he doesn't test the audience's credulity.

"The narrative is like the trail that moves through the forest," Nilles said. "As long as you keep one foot on the trail, you can step off as far as you can."

For instance, that castle siege takes place when Joe encounters some live-action role players, not an unfamiliar sight at certain downtown Missoula parks during the summer. It's "real" to the characters, save Joe, and so the audience will accept it without rolling their eyes.

A dream sequence allows him to funnel in references to war movies, zombie flicks and Westerns without any meta conceits.

All told, the film will likely hit the 140-minute mark.

"I thought about all the scenes we've shot. I think it's equivalent to about three independent movies on this level, combined into one," Nilles said. "If I add the time up and divide it by three, I don't feel so bad.

Nilles is a fifth-generation Bitterrooter who grew up in Hamilton and Corvallis. As an only child, he made his own radio shows and was shooting his own "Indiana Jones" short films by his teens. He spent a year in the filmmaking program at Montana State University, but said it wasn't a good fit. He struck out to make his own feature, called "Little," about a man who's imperiled after a car company wants to kill him and steal his design for a super-efficient engine. He eventually edited it down to a 55-minute film.

He moved to Los Angeles for a spell, but decided he'd rather come home to Montana and start making his own movies rather than work his way up via crew gigs. He has his own company, With a Cause Productions, and makes commercials and corporate videos and freelance film work, that's occupied his time outside his years-in-the-making passion project.

Shooting on "Saving for the Day" began in 2009. The script "ballooned" over time, Nilles said. Often he'd add scenes to give actors like Medley or Jared Brandon, as one of the LARP'ers, more screen time.

"We've got a good strong cast, and we found out we wanted to get more out of them," Shirtliff said.

It was a "weekend warrior" project - since Nilles' crew wasn't paid, they could only shoot on the weekends.

For Shirtliff, this meant traveling countless miles on the road. After pursuing an acting career in Los Angeles, the Kalispell native moved back to Montana and studied political science. He followed that career around the state, with stops in Billings and Helena. He's continued acting, and said he's had more opportunities here than he ever did in California.

He'd drive to Missoula on Friday nights after work and be back home in time to watch "Game of Thrones" on Sunday night, he said.

Zacharisen signed up because Abbey was "exactly what I'd always wanted to play," she said. She's a scientist and not a "damsel in distress." She's lived in Missoula throughout the shoot, except for a year spent in New York, where she had to come back for two weeks.

Regarding the time commitment, she said "through the course of the filming, we were like our own little weirdo family." She wanted to stay on to finish not only for her friends, but to get it in front of the public.

She said Nilles was professional and picky: A typical comment after a shot was "that was perfect, let's do it again."

When the shoot began, Zacharisen had long bangs, a style she'd grown tired of several years ago.

"Luckily, I didn't lop it off one day out of spite," she said.

The film is set in the fall, which complicated the shooting schedule for iconic locations like Waterworks Hill. Indoors scenes, meanwhile, could be shot on the weekends throughout the year.

Shirtliff said Nilles had many clever micro-budgeting ideas: making a crowd of 10 looks like 50. Shirtliff even tried to do all his own stunts.

Shirtliff estimates that he's invested 1,300 hours of time in the film, about ball-parked Nilles' at 3,000.

Over the course of the shoot, he's said Nilles has become a best friend. Nilles' mother even taught him to ride a horse for the shoot.

Missoula-based writer-director John Nilles is trying to raise $33,000 for post-production on his movie, "Saving for the Day." To donate or learn more, go to missoulamovie.com.

Sioux Falls: Melodic and raw post-punk from Bozeman by way of Portland

Before further discussion of the lovably angsty and raw music of Sioux Falls, a geographic matter to settle:

The Internet may one day fully erode regionalism, but for now bands still bear signs of their home turf in interesting ways. Take Mendelssohn,…

​Break out your best Marty McFly gear or "Carrie" as long as you don't mess up the floor this Saturday, when the Wilma hosts a 1980s prom to b…

Wilma to screen 'Purple Rain' in honor of Prince

​It's been about a week since Prince Rogers Nelson departed this earthly plane, and no doubt some of you are still in appropriate clothes of m…

The album name "RezErected" isn't an exaggeration for the Codependents.

Making a break for it: 'Escape room' phenomenon comes to Missoula

You're a spy. Well, no you're not. Thankfully you have a group of friends with you to help you think like one.