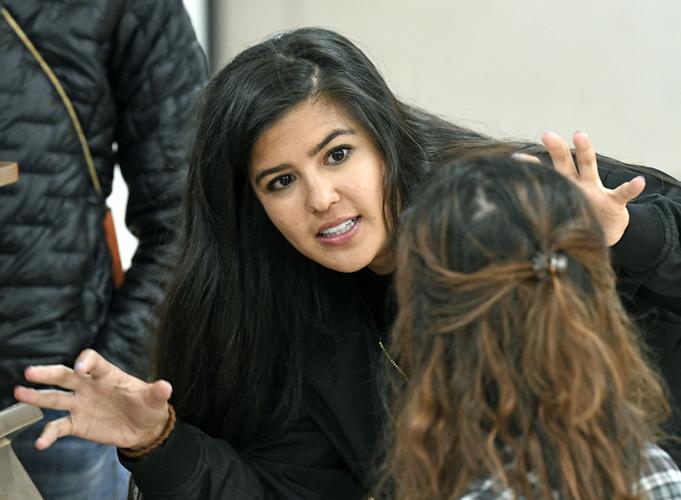 Ari Afsar, who is composing music and lyrics for a musical about Jeannette Rankin, talks with music director Sheela Ramesh on Wednesday at the University of Montana. A sneak peek of the production is Thursday at the Masquer Theatre on campus.

“We Won’t Sleep,” a work in progress, tracks her life in the years from 1916 to 1920. Creator Ari Afsar, a cast member from the Chicago run of “Hamilton,” found Rankin’s story fascinating (and “badass”) but not widely known.

“Why is that erasure happening?” Afsar asked. "And why do we not know who this woman is? And yet, I can list off the amount of forefathers, right?"

She’s not, however, trying to tell the whole of Rankin’s life, and “We Won’t Sleep” is not a biopic. It will attempt to cover her pioneering life and legacy, contradictions and all.

“Every win that one may have in their life is also met with a lot of struggle and trauma and obstacles that come along with that,” Afsar said.

The sneak peek is showing one night only, at 7 p.m. Thursday, Sept. 8, in the Masquer Theatre at the University of Montana. Tickets are available through the “pick what you pay” system to make theater more accessible for all. Head to griztix.com for more information. Audiences will hear selections from the show and the creative team will answer questions.

The book was written by Lauren Gunderson (“You and I”) and Jordan Ealey. Music director is Sheela Ramesh, and the co-directors are Erin Ortman and Yusha-Marie Sorzano.

Afsar wrote the music and lyrics, and the style is musical theater with Americana and pop, in the “all-encompassing sense,” she said.

She performed in the Chicago cast of the mega-hit “Hamilton,” as Eliza, the wife of the founding father, starting in 2016 and continuing for two years.

She began writing the Rankin musical in 2017. In the wake of the heated national election, she asked herself why she knew so little about women who’d blazed paths in the U.S. government. A quick search yielded Rankin — the first woman elected to the U.S. Congress before the ratification of the 19th Amendment that enshrined women’s right to vote; a pacifist who voted against American involvement in both world wars; and the only female congressional representative Montana has had since.

Afsar listed aspects that are rich for dramatic exploration: While she was the first woman elected to Congress, she was voted in by men. She advocated for the 19th Amendment, which didn’t extend the right to vote to Black women.

Her legacy is ripe for questions.

“What are we learning? How are we growing? And how do we learn the full truth of our history in order to move forward?” she said. “That requires a lot of critique, investigation and challenge, and that's kind of the questions that are continuously asked and posed in the musical.”

Rankin grew up on a ranch near Missoula and studied social work at the University of Montana. After moving to New York, she became involved in the suffragist cause and eventually returned home to run for office.

The Peace Center here in town is named after her in honor of her pacifist beliefs (she was the lone “no” vote after the attack on Pearl Harbor). After she left Congress, her pacifist activities continued and she marched against the Vietnam War in Washington, D.C.

In the current draft, three actors of “different identities and lived experiences” will portray Rankin, to see “all of the amazing, and also not amazing things, as any human and any historical figure has, and we have to be critical of it,” Afsar said.

Other characters include her sister, Edna Rankin McKinnon, who advocated for birth control; and her brother, Wellington Duncan Rankin, a landowner, lawyer and early supporter of her move into politics.

Another key character is Greenwich, an amalgamation of different individuals and named after the neighborhood in New York where Rankin lived.

She’s Rankin’s love interest — Rankin never married or had children, instead holding close female friendships that have led many to believe that she was probably gay or bisexual. (For more, see the WNYC Studios podcast, “The United States of Anxiety” series and the episode, “The Original Nasty Women,” with Mara Silvers, now of the Montana Free Press.) Afsar wants to delve into why that aspect of her life is also mostly not spoken of.

The sneak peek — which is not a staged production yet — comes with the support of the Montana Repertory Theatre and the Rankin Foundation. The latter is a separate entity from the Peace Center and was formed with a bequest from her estate. It’s based in Georgia, where Rankin lived between her two terms in Congress.

“A part of our mission is to tell stories that are by and about and for the people who live here, and so I've been interested in this for a long time,” he said.

The project is in development, with the details of any full production still yet to be determined. The years-long effects of the pandemic on the theater world are still being felt.

Afsar, who’s visited Montana many times during the writing process, added that she would love to present a full staged version here at some point in the future.

A new two-story lodge would be built, along with a new 3,000-square-foot Mission View Restaurant. A large ski resort company is a partner on the project.

A man faces four felony charges on allegations that he threw a flaming Molotov cocktail at Buffalo Wild Wings employees on Tuesday evening.

Ari Afsar, who is composing music and lyrics for a musical about Jeannette Rankin, talks with music director Sheela Ramesh on Wednesday at the University of Montana. A sneak peek of the production is Thursday at the Masquer Theatre on campus.