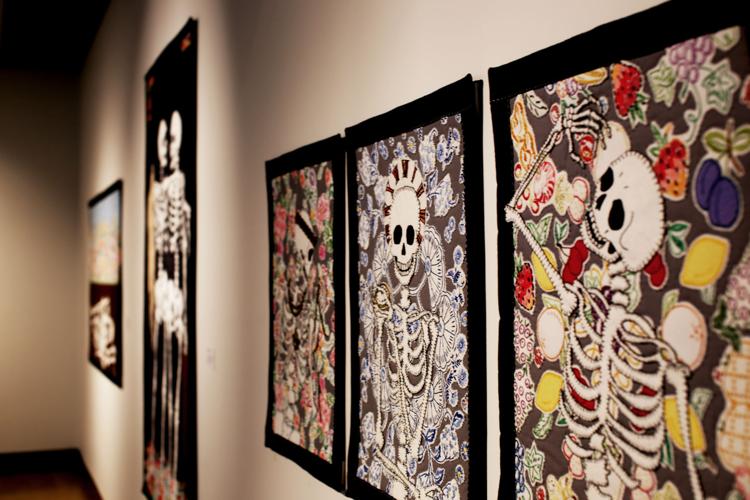 Red Lodge artist Maggy Rozycki Hiltner's exhibition, "What Lies Beneath," is on display now at the Missoula Art Museum. 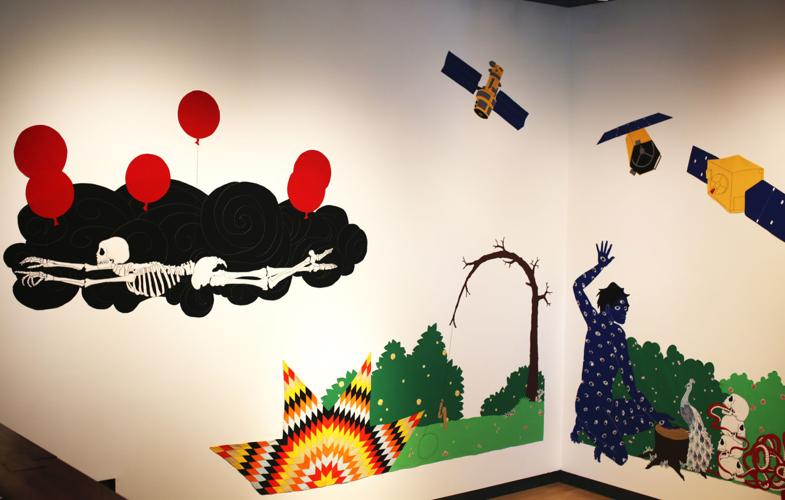 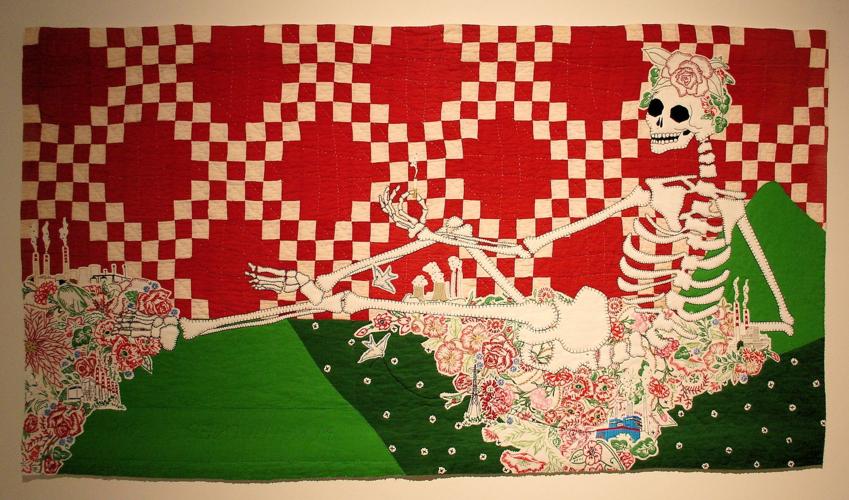 The contradictions between comforting raw materials and socially minded subject matter can offer a challenge to an artist and startling experience for viewers.

In "What Lies Beneath," Maggy Rozycki Hiltner's new exhibition at the Missoula Art Museum, she uses our familiarity with textiles as a hook to ask questions about racism, war, surveillance, gossip, mortality, environmental degradation and more.

The effect is immediate when you see a soft quilt, clustered with racist imagery from the 1950s. Nearby, she's deconstructed a vintage, pre-war blanket embroidered with a design called the "Catch Me If You Can," that was later used by the Nazis for their swastika.

Rozycki Hiltner, a lifelong sewer, began exploring the potential of found textile imagery some 20 years ago.

"I love working with textiles because the material is so approachable," said the Red Lodge-based artist.

They pose a challenge, as she finds older quilts and embroidery and puts them to a different end. In previous works, she often used "Dick and Jane"-style imagery to subversive ends. Say the embroidery has something saccharine or cute or nostalgic. She'll find a way to question it. "Something sweet? I'm always looking for the other side of the story."

Two of the most pointed pieces in the MAM show originated with a gift from a friend whose grandmother had stored them away — now that Rozycki Hiltner is established, people often send her items. "Dresden" depicts a mass of white skeletons on an all-black quilt with a repeated floral background. It was pink, white and tattered when Rozycki Hiltner received it. The floral motif was referred to as the Dresden plate, named for the Germany city that had been a center of cultural industry. It was also a center of industry for the Nazis, and Allied Forces targeted it in the deadliest bombing campaign of the war. Rozycki Hiltner recalled a story about a road construction project in the area years later, in which crews uncovered buried skeletons of the war dead.

The other quilt her friend gave her wasn't tattered at all. The grandmother had stored it away after the rise of the Nazi Party, who had co-opted the swastika, formerly a symbol used around the world in art, architecture and clothing.

This particular one has a pattern called "Catch Me If You Can," with blue swastikas on a white background. She stripped the swastikas out and resewed them at the bottom of the quilt, as though they had fallen off a wall and onto the ground, some appearing bent and folded. A growing cloud of white birds and filigree rise from the heap.

She feels her task is to "reveal the artifacts of my culture, so I'm doing that through changing their context and their content."

In her older work, she often used classic all-American imagery for her protagonists (granted they weren't behaving exactly like they normally would). In these works, it happens that skeletons and devils emerged, although she cautions that not all the work in the show has heavy subject matter.

When Rozycki Hiltner enrolled at Syracuse University to study sculpture, the lifelong sewer and stitcher was drawn to the fiber arts department, where "most of the strong female professors" worked. She found a middle ground producing fabric constructions, but had to switch to textiles once she graduated and lost access to the facilities and studio space.

After a year at the Arrowmont School of Arts and Crafts as a studio assistant, she opted to skip graduate school and has spent the past 20 years "head-down, sewing."

She began working in "found embroidery" when her husband, the artist David Hiltner, got a teaching job in Powell, Wyoming. She found a job at the Homesteader Museum and started collecting homesteader textiles.

It was largely a "white on white" phase that ended abruptly when they moved to Kansas, where the palette of fabrics available veered into brightly colored kitsch.

"I like the game I get to play with the brightly colored stuff, because it looks safe and fun and inviting and then you get closer, and it's like 'What's going on here?' " she said.

From across the gallery at the MAM, two pieces seem like they could be cheerful as their palette. Once you get closer, you realize "Red and White Quilt with Racist Embroidery" is studded with imagery of African-Americans, and the experience becomes queasier when you realize the dehumanizing, cartoonish figures were made for decoration in the home. To heighten the contrast, Rozycki Hiltner placed them on a quilt pattern referencing traditional African-American styles that are now exhibited in art museums.

Rozycki Hiltner began working in large, installation-sized pieces about five years ago. It was part of a transition from galleries to museums, the latter of whom were interested in wall-covering constructions (which are not as easy for galleries to sell).

"Hothouse Flowers," one of the first big pieces, "looks sweet and personal, but it's all about burgeoning sexuality and speeding up adolescence and the battle between pubescent men and women," she said. "It's a loaded little number." (It measured a foot and a half high and sprawled 12 feet horizontally.)

Two years ago, the Mesa Arts Center invited her to create her largest installation yet. The many panels of "Vantage Point," a work about environmental destruction, sprawl across 72 feet horizontally. It's traveling through museums around the country. In Montana, it will land at the Holter Museum of Art in Helena in 2019. The piece is growing, too. She'll add a few more panels, as there "never ceases to be more environmental travesty."

"Some of these ideas aren't little vignettes," she said. "They need a whole world around them."

The MAM exhibition has a sprawling piece titled "Installation" that spans two walls. On the ground level is the Argos, the hundred-eyed giant of Greek myth, near a knotted pile of snakes and skulls. To the left is a sling-trap. A row of satellites orbits above. A supine skeleton flies, held aloft by red balloons, floats away on a black cloud. Rozycki Hiltner views it as an indirect narrative about the current state of information, in which gossip, surveillance and social media created a constant state of connectedness and potential for miscommunication.

Rozycki Hiltner and her husband moved to Red Lodge to start the town's clay center. She's shown her work around the state, and in 2015 won an Artist Innovation Award from Humanities Montana.

She has her own studio and a studio assistant, who can help with preparation and the generally time-consuming work.

About five years ago, Rozycki Hiltner stopped using sewing machines entirely, although she didn't use them very much to begin with. Viewers of exhibitions would puzzle over the smaller characters in her work and debate what was hand-stitched and what wasn't, which she thought was a distraction.

A hand-stitch is "a very purposeful mark," she said. "It's an act of humanity. To make things by hand is a huge political act."

Maggy Rozycki Hiltner's exhibition, "What Lies Beneath," will be on display at the Missoula Art Museum through Sept. 16. Hours are Tuesday to Saturday, 10 a.m. to 5 p.m. Admission is free. For more information, go to missoulartmuseum.org.

Rozycki Hiltner will lead a workshop, "Embroidery Collage, Found, Hand-stitched, and Altered" on Saturday, Aug. 19, from 10 a.m. to 4 p.m.

Review: Fleet Foxes make long wait worth it with 'Crack-Up'

BUTTE — In addition to being the site for a television pilot airing on HGTV this week, Butte may also soon be the location of a new feature-le…

The National Endowment for the Arts has announced nearly $1 million in grant money for Montana arts projects and organizations.

Madonna's nude photos get her banned from Instagram Live

'Jersey Shore' cast are 'not in support' of MTV's upcoming reboot

'Jersey Shore' cast are 'not in support' of MTV's upcoming reboot

Red Lodge artist Maggy Rozycki Hiltner's exhibition, "What Lies Beneath," is on display now at the Missoula Art Museum.