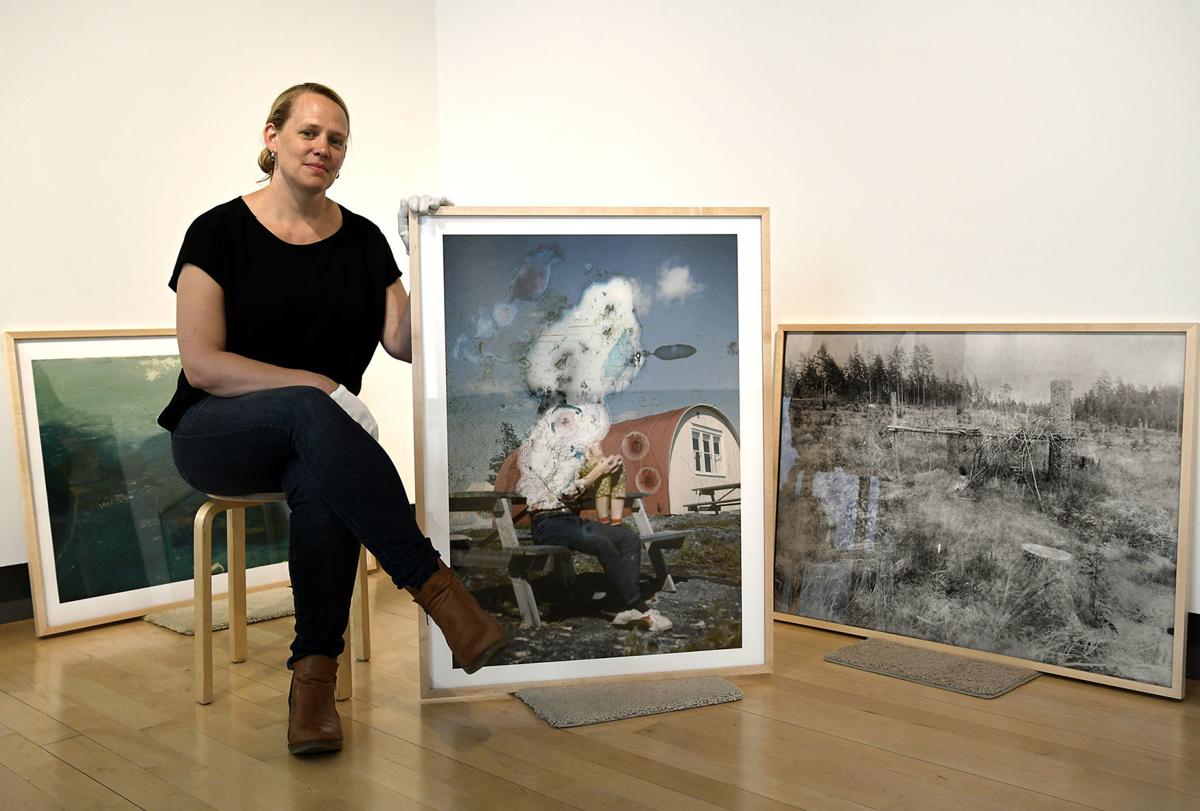 Linda Maria Thompson sits with some of the prints from her exhibition, "Emigrant Memoir," at the Missoula Art Museum on Friday. Thompson's art and accompanying book explore collective and personal stories of migration, in her family's experience between America and Sweden. 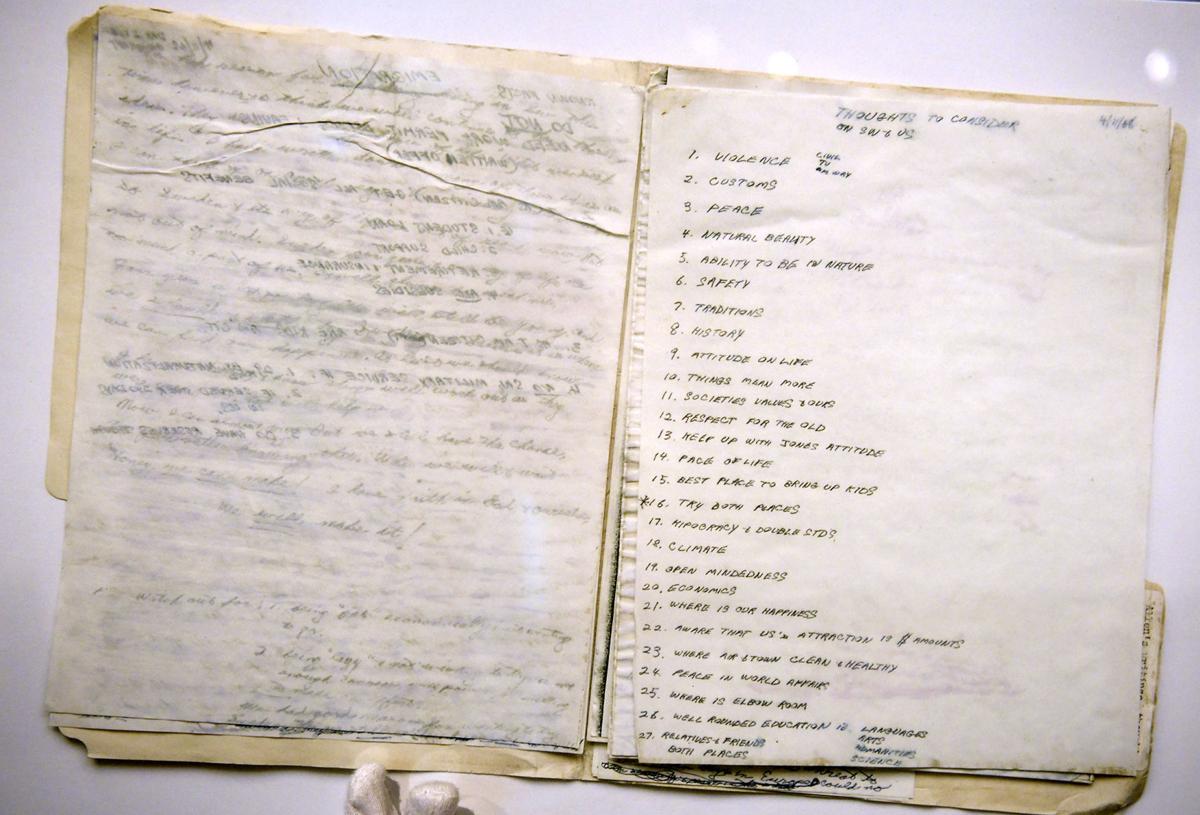 Among the prints in Thompson's exhibition are her American father's water-damaged notes he made in the 1960s, as he weighed the pros and cons of living in America or Sweden with his soon-to-be Swedish wife. Thompson said she and her husband discuss many of the same issues.

The nuance in the title of photographer Linda Maria Thompson's project, "Emigrant Memoir," is an important one.

The book and accompanying art exhibition at the Missoula Art Museum explore the perspectives of people who've migrated from home and the "loss and longing" that accompany such moves, she said.

"I'm trying to mix all these collective and personal stories into one story of migration, of the emigrant, of leaving a place," she said.

It spans many generations: Swedes who came to North America in the late 1800s and early 1900s; her father, an American, and her mother, who was Swedish, and who lived in both countries; and her own experiences. A former Missoulian staff photographer, Thompson moved to the country of her birth, Sweden, in 2011 and has raised her family there.

The mediums include essays based on historical research, family documents, and her own first-person recollections. She used her parents' pictures, many of which were damaged in a flood, and black-and-white photos from Sweden and Montana that she shot on a large-format camera.

She thinks of the project, which draws on many different styles of storytelling and art forms, as an "investigation" into a universal feeling shared by people who have moved either across oceans or a few hours from their hometown, and question their place in their new home or why they'd undertaken the journey, or what they've lost or gained.

While photographing a project on refugees coming to Sweden, she began looking through museum archives of documents on Swedish people who moved to America. (She's careful to note the distinction between people who were forced to migrate and those who've moved of their own volition.)

She found an old studio photograph of a woman standing in a field of fake flowers. On the back of the photo, a woman wrote that she had moved to America because of this picture. Thompson began thinking about the power of images, and whether there was a "migrant aesthetic," and the ways that migrants document their own lives.

She considered how an older generation of Swedish-American immigrants are romanticized — coming West and starting up from nothing (a view she found problematic, since indigenous people were forced from their land.) Meanwhile, contemporary discussions of migration involve "fear and a lot of apprehension and a lot of vilification of people that are moving for pretty much the same reasons" that prior generations did.

Thompson's mother is from Sweden, and on high school exchange abroad in Michigan, she met her future husband. They maintained a long-distance relationship for years and eventually married.

After living in the States for a while, they moved to Sweden for five years. Thompson was born there, and the family migrated to Indianapolis to be closer to his side of the family.

Thompson's father was fascinated by the West, and was happy when she enrolled at the University of Montana. She took a photojournalism class at the suggestion of an art photography professor — he thought it would help her overcome a fear of shooting photos of people, particularly strangers. Photojournalism appealed to her, and she was inspired by a visiting instructor who encouraged students to explore a "European aesthetic" that didn't draw much distinction between art and photojournalism.

After working at the Missoulian for a six-year stint, in 2011 she and her husband Raven Rashap decided to move to Sweden. A fisheries technician for the state, he was interested in graduate school, and in Sweden he could attend tuition-free. She had a yearning to live there, and for him to see where she was born. She studied for a master of arts in photojournalism from Mid Sweden University, and lectures on photography there.

They've earned full citizenship for themselves and their two children. While they originally intended to stay for perhaps two years, they've stayed and are not sure if they'll ever move back to the U.S.

The front half of the book comprises short essays about her family and their travels back and forth (which have a symmetry with her own). It branches into research about an earlier generation of Swedish emigrants, and her projects documenting current immigrants to the country. There are pieces on growing up in the U.S. with a foreign mother, her father's desire to leave Sweden and his disappointment on moving back to the Midwest.

The pictures make up the other half of the book. They don't have captions, since she wanted viewers to be able to create their own narratives, but there's an index with descriptions.

"It felt important to have this context, because each image is really loaded," she said.

She made use of family archives, many of which were damaged in 2004, when there was a flood in Asheville, North Carolina, where her mother was living. Her storage unit, filled with slides and film, was swamped.

Her mother considered it "the third trauma of her life," Thompson said. Thompson's grandparents died in 1994 in a plane crash. Her father died of breast cancer in 2001. And now, "the manifestations of her memories and her life in Sweden and her life with dad and her parents, the last thing she had left, was destroyed," she said.

To try to save them, Thompson's mom had the damaged slides and 8mm film transferred digitally.

Years later, Thompson was looking through the film clips on a computer and was struck by the images, many of which were short reels of airplanes taking off and landing. She saw a kinship with her thoughts of migrant documents, and contacted her mother and took a trip in 2017 to look through the archives.

She began photographing screenshots of the film, not unlike she would if she were a news photographer sent to cover a house fire, she said. The instinct was to capture a moment and share it with others.

The damage to the film created abstract overlays of color that result in striking pieces of found art.

A slide from 1966 shows Thompson's mother and father seated on a bench during his first visit to Sweden. Lightly discolored blots cover their upper bodies and faces, leaving only their legs. It gives them an open-ended quality, as though you can place your own relatives or yourself in the image.

Her father's handwritten love letters, washed out from the flooding, are reproduced, too, with a watery texture that resembles the background of abstract paintings.

During the same visit to the U.S., she and the family traveled through Montana, stopping at historical sites important to prior Swedish immigrants, her own family, or her time before moving abroad.

She shot photographs on a 100-year-old large-format camera that could consume about 45 minutes to take one picture. She was printing to paper negatives, which required exposures of either 3 seconds or up to 10-minutes of exposure.

She said the decision was "more about process than look," and slowing down from the speed required at news assignments, which require quick visual problem solving. It's more meditative and gives the photographs a certain aura, or raises questions about time and migration.

MAM senior curator Brandon Reintjes said, "even though it is using some historical photographs, the line between what's historical and what's contemporary is completely blurred, and what is found and what is manufactured is blurred."

At the MAM exhibition, she's showing prints made in an 1800s process called an anthotype. It's a plant-based emulsion that doesn't last, a "transient" quality she found appealing. She made her own paper out of blueberries, native to Sweden, and lupine, an invasive plant from North America. She printed historical images on them that will hang in the gallery and eventually decay.

She also cut up quotations from Swedish emigrants about why they moved, which can be heard on audio that she narrated herself.

The artistic project has taken many forms, she said, while staying rooted in documentary and storytelling.

It was heartbreaking at times and therapeutic as well.

You can think of it as "a love story to the document," she said. "You take pictures because you want to remember a moment" or save notes that your children might study one day. With photographs, too, she said, you try to "capture the moment, but the moment is long."

The question can drift into an existential one, she said. "Is it possible?"

Thompson's exhibition, "Emigrant Memoir," is part of the Missoula Art Museum's Art Swing on Friday, May 31. (See related story.) It's on view through Sept. 7.

On Saturday, June 1, from 9 a.m. to 4 p.m., she'll give a workshop on "Re-Photography." Go to missoulaartmuseum.org for more information.

A study that calls Montana the least deadly state for motorcyclists suggests an even more startling nugget:

Big-game hunters get better, safer results with new copper bullets. Explaining why, however, tends to fragment in unexpected directions like a…

Photographs contemplating family, migration and an artist's move from Missoula to Sweden. A Wisconsin artist's prints that mix indigenous bead…

Linda Maria Thompson sits with some of the prints from her exhibition, "Emigrant Memoir," at the Missoula Art Museum on Friday. Thompson's art and accompanying book explore collective and personal stories of migration, in her family's experience between America and Sweden.

Among the prints in Thompson's exhibition are her American father's water-damaged notes he made in the 1960s, as he weighed the pros and cons of living in America or Sweden with his soon-to-be Swedish wife. Thompson said she and her husband discuss many of the same issues.