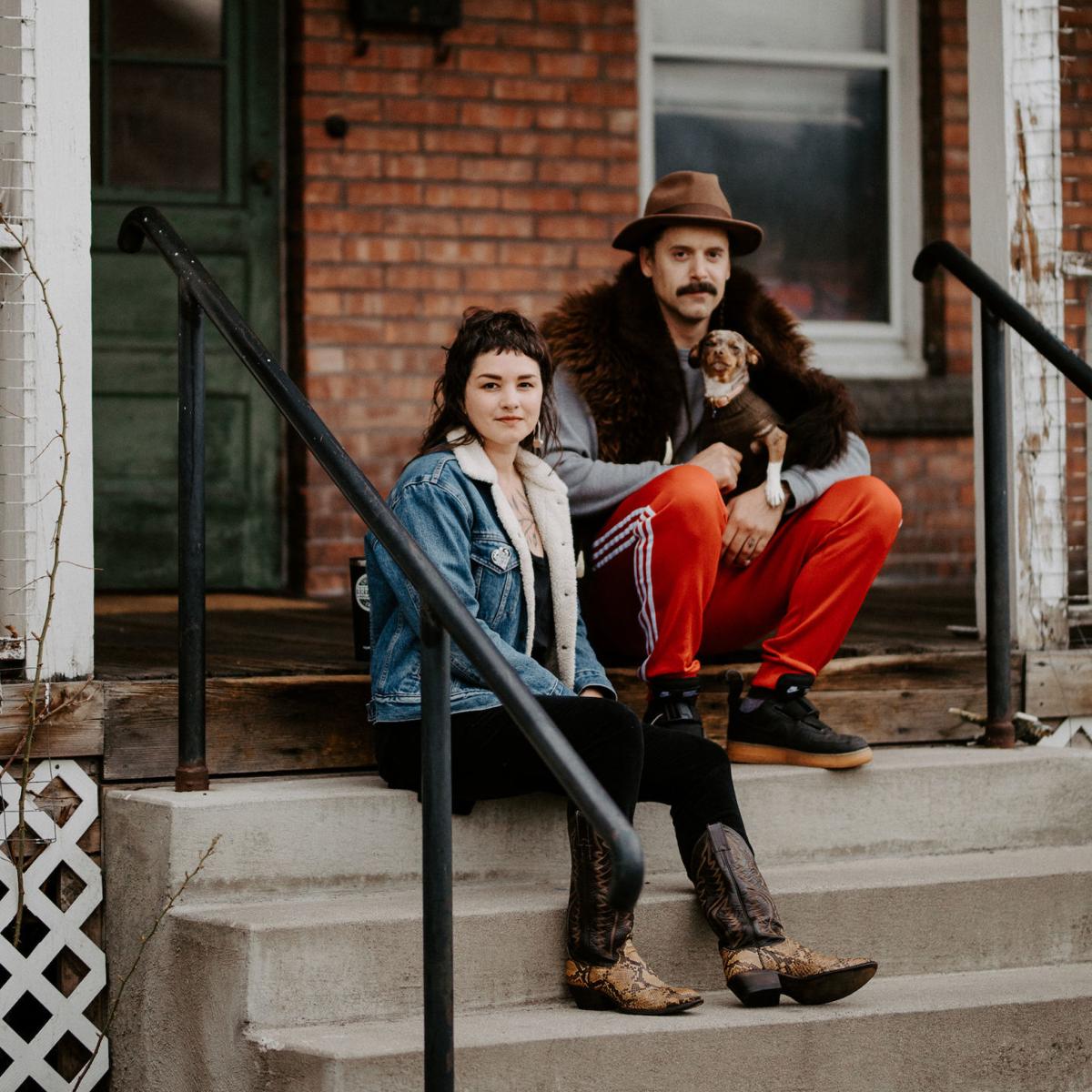 Photographer Ashley Farr has started shooting portraits of people on their front steps and inviting them to donate money to the Poverello Center in lieu of payment. Seen here are Buck and Bridget Miller on their stoop. 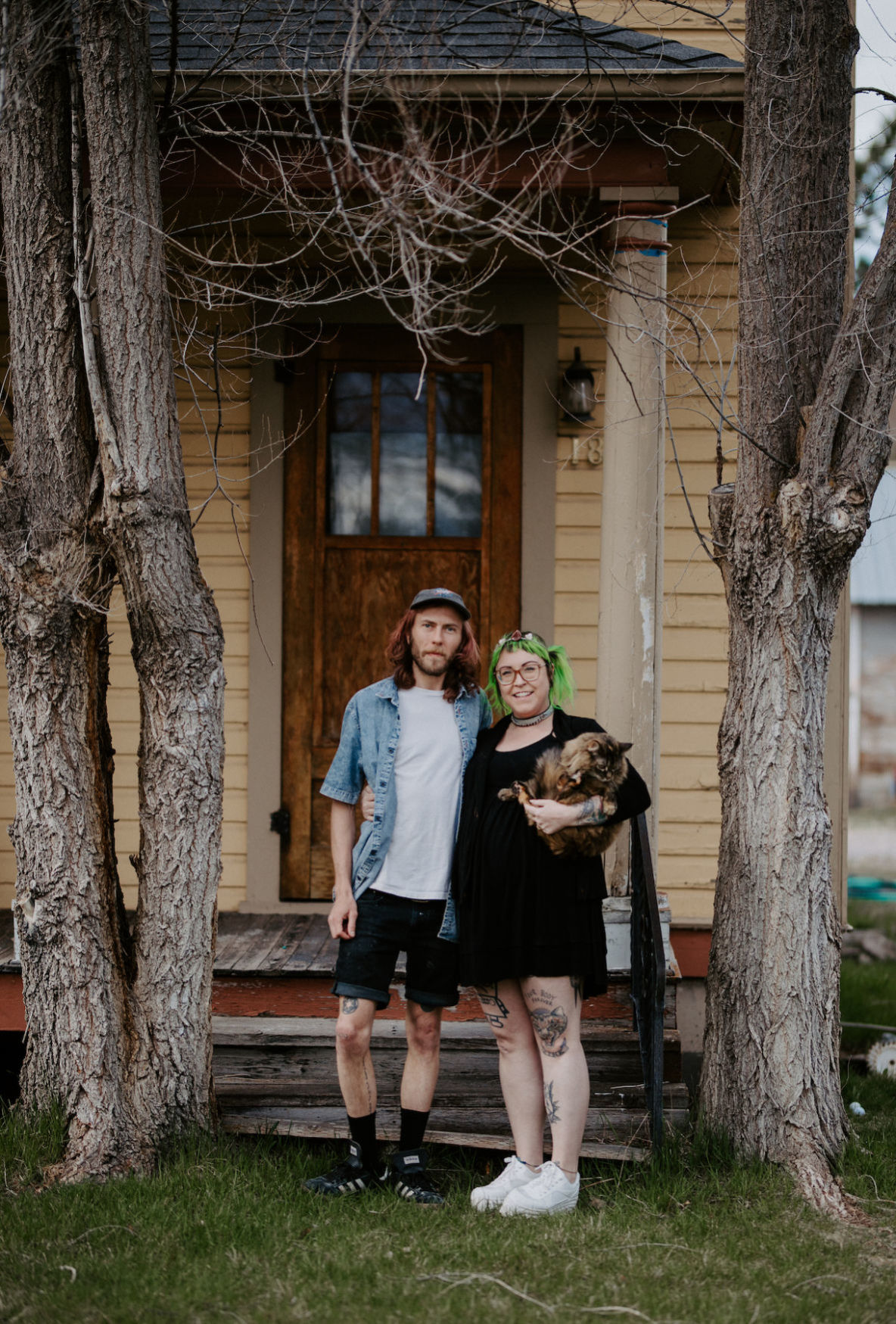 Foster and Andrea Jo Caffrey had their picture taken. Andrea said it was an opportunity to have a pregnancy portrait and a document of a "crazy time" in their lives. 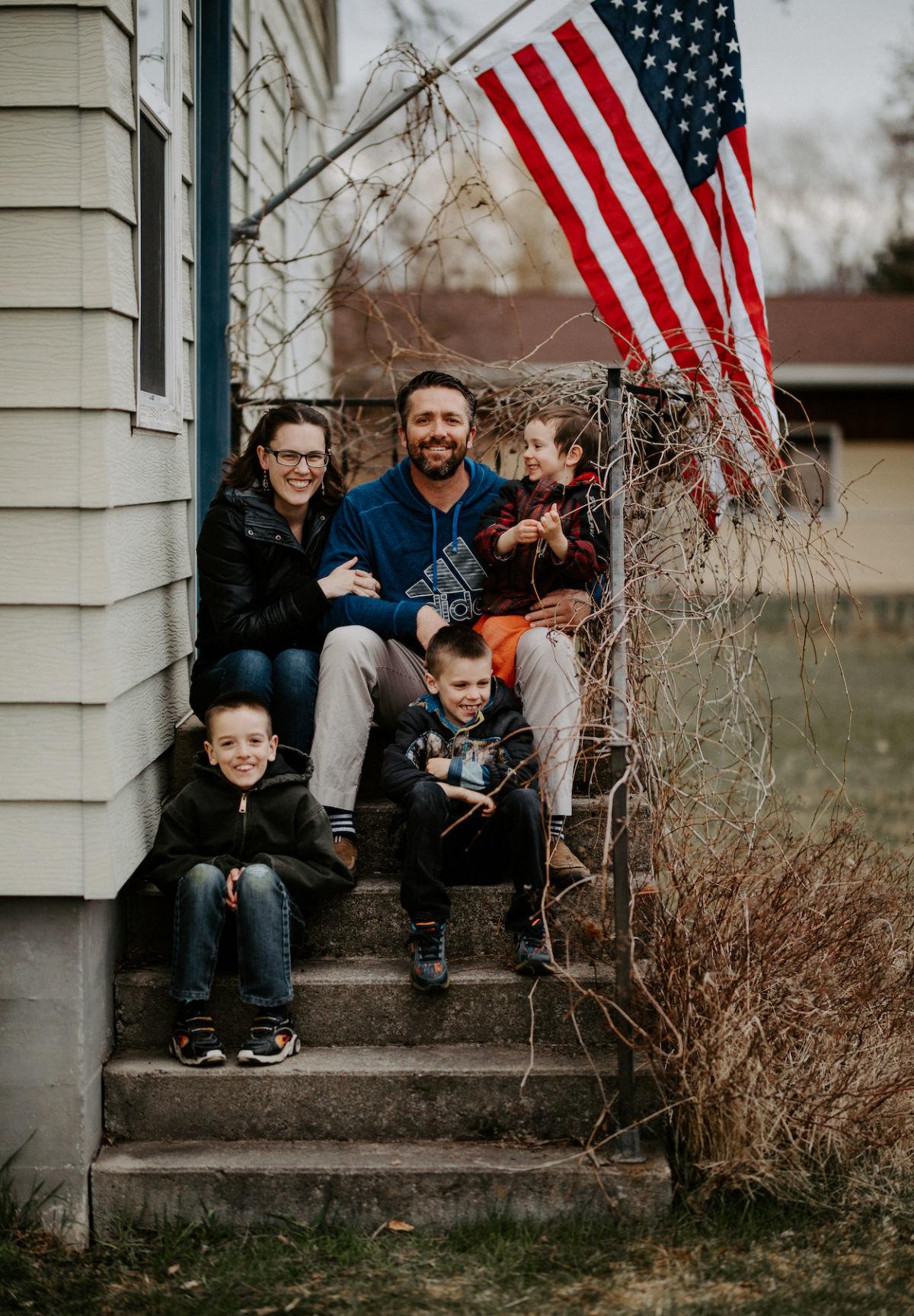 Jared and Elizabeth Beaird are among the many Missoula families to sign up for portraits. Their children are, from left to right, Caleb, Parker and Austin.

On Sunday, Ashley Farr, a professional photographer, loaded her camera into her car, and with some routing help from MapQuest, shot 20 portraits of couples and families on their front stoops in about three hours, all from a safe distance of about 40 feet. In lieu of any payment, she asked that they donate to the Poverello Center, which is navigating the task of operating as a shelter during a pandemic.

The Front Step Project explores a concept that other photographers have been experimenting with around the United States since shelter-in-place and social distancing orders began last month.

It’s a quick exchange, but a happy one, she said, and "a glimpse of joy in a time of struggle and uncertainty."

It appeals to her on many levels personally and artistically. She gets to meet new people in her hometown and is “bringing people together through something I love to do." For a previous project, the University of Montana photojournalism graduate shot black-and-white portraits of locals she met around town and wrote a brief snapshot about them. Initially, they lived on Facebook, but she eventually produced enough for 200-page book, "Missoula Rabble."

Like that project, these photos provide endless variation within a unified theme.

After a trial run with volunteers and recruits to help her promote it online, she began to get a steady stream of inquiries. She has 90 more people signed up, and plans on shooting them on Sundays through the end of May.

Andrea Jo and Foster Caffrey signed up after they saw some of the portraits of their friends and neighbors online. The two are expecting a baby in three months, and she thought they should "get a memento of this crazy time we're living in, and snap a pregnancy picture while we're at it." The two are always game to get their photo taken, and the fact that 100% of the proceeds were going to the Poverello felt good as well. So far, the clients have donated $1,300 to the shelter.

Andrea spent about three hours getting ready, after weeks going without any make-up.

"It was a huge morale booster as well, as putting some time into myself that day, and then she came and our pictures were done in under 5 minutes," she said. Farr keeps the shoots on a tight schedule, and even texts people to let them know she’s outside so she doesn’t have to come to their front door and get too physically close.

Andrea owns the Canvas Studio salon and Foster works at Garage Tees, both businesses that have been affected by the state’s order to close non-essential businesses. In the meantime, she's mailing products to customers and Foster is baking and delivering bread.

Farr, likewise has been affected. Many of her clients for wedding-day photos are scrambling to reschedule for the following year, and the project is giving her a way to contribute to her community and stay busy in the interim.

She thinks everyone involved enjoys the photo-shoot experience as the city moves into its fifth week of quarantine.

"It's just nice to see someone else, for me and them," she said.

To sign up for a session or see more pictures, go to ashleyrhianphotography.com or the Ashley Rhian Photography page on Facebook.

“The how and the why,” a collection of songs that will eventually be released on an album in the fall, tells the story of Rosie Cerquone’s college experience and explores the question: What comes next?

The challenge has been encouraged on social media locally, with the Montana Historical Society and City of Missoula Public Art Facebook pages sharing submissions from area participants.

'Not out of the woods': Montana medical expert urges caution

The head of the Montana Medical Association said Friday he supports a gradual reopening of the state while reminding residents to remain vigilant.

Polson woman spends stimulus check to feed others: 'You can't keep me down'

Conventional wisdom suggests not spending all your money in one place, but that’s exactly what Nancy Hausermann did when her COVID-19 stimulus check came through: All $1,200 went to food for anyone in need.

The concert industry in Missoula was shaping up for a record year, one that fell off completely due to the coronavirus. Because it relies on b…

At an outdoor art park in Lincoln, social distance is easy to find

The most socially distant place to see art in western Montana is hidden from view just off the highway here, where towering sculptures of metal, wood and in some cases, newspaper, emerge from the treeline.

Photographer Ashley Farr has started shooting portraits of people on their front steps and inviting them to donate money to the Poverello Center in lieu of payment. Seen here are Buck and Bridget Miller on their stoop.

Foster and Andrea Jo Caffrey had their picture taken. Andrea said it was an opportunity to have a pregnancy portrait and a document of a "crazy time" in their lives.

Jared and Elizabeth Beaird are among the many Missoula families to sign up for portraits. Their children are, from left to right, Caleb, Parker and Austin.