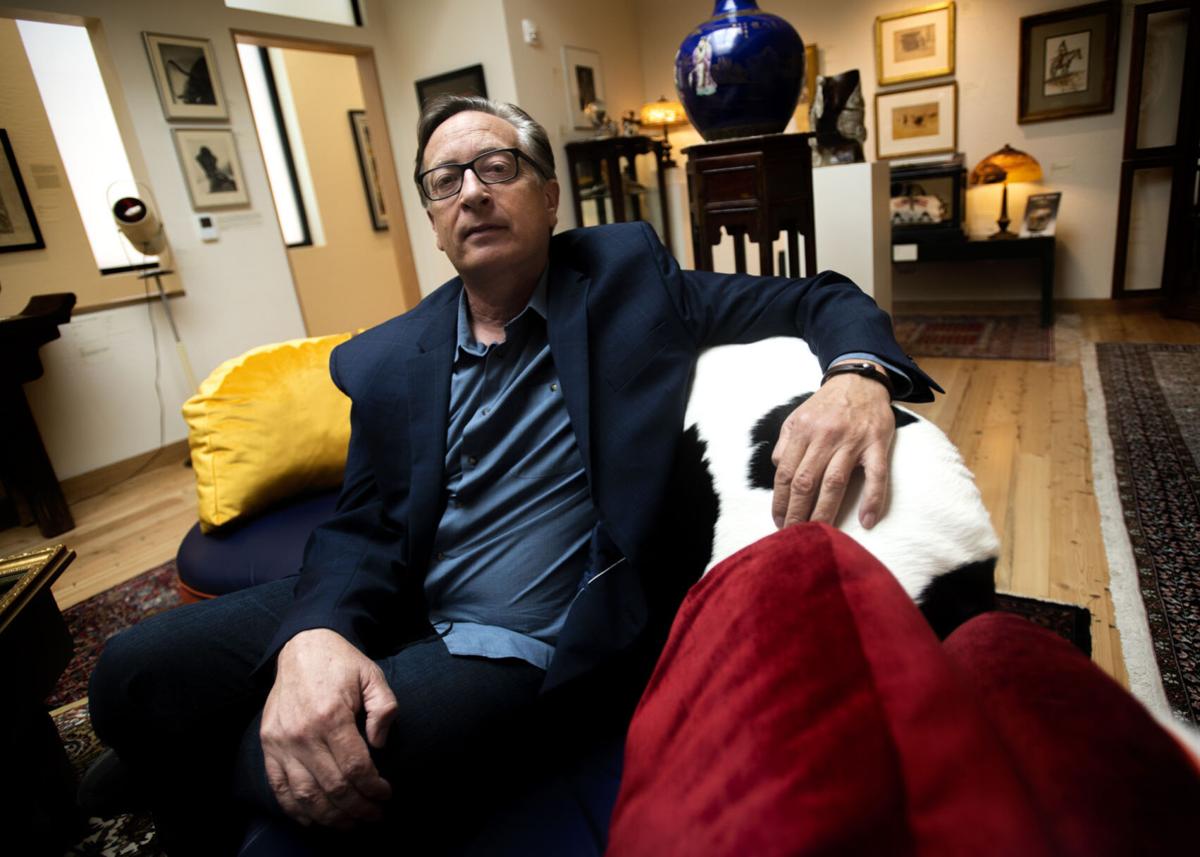 Timothy Gordon is the curator for Relic, a new gallery space in Missoula. The gallery, located on the second floor of Radius, features pieces by renowned Montana artists such as Rudy Autio, Frances Senska and David Shaner. 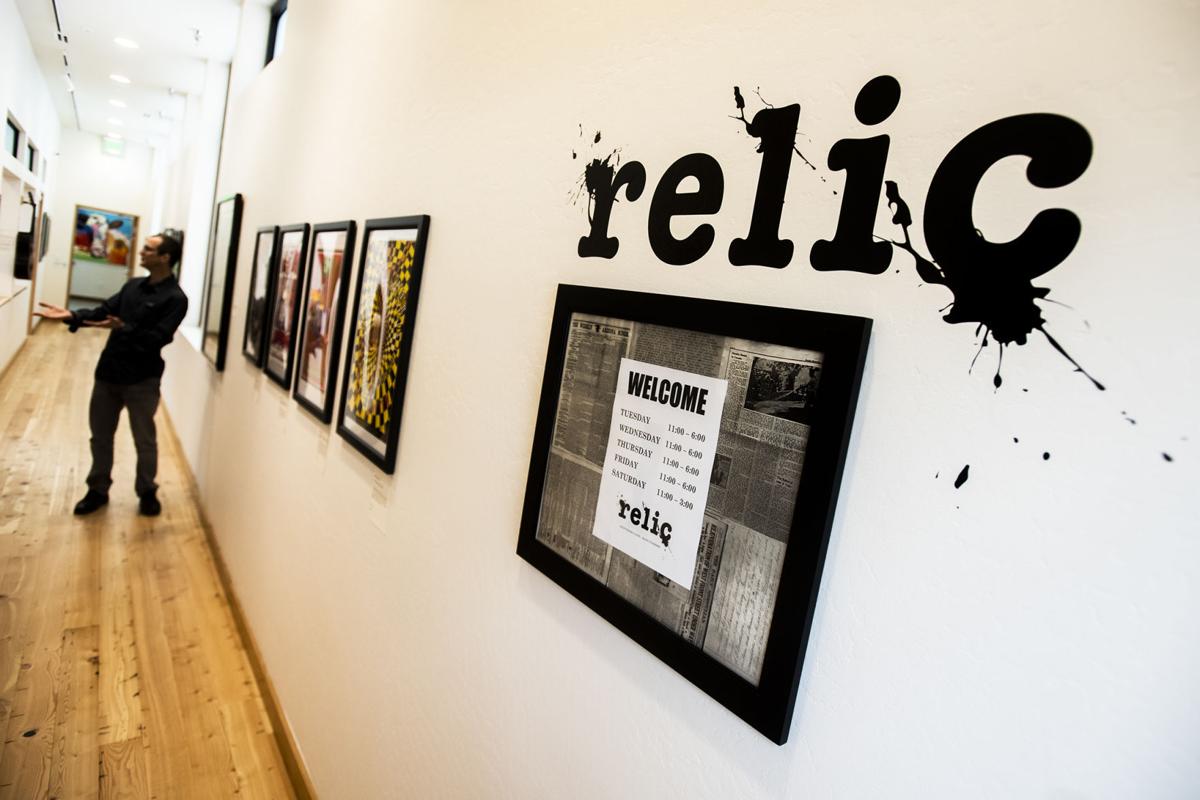 The gallery is a collaboration between Timothy Gordon, a local art appraiser, and Brian Sippy, the owner of the Radius Gallery building. 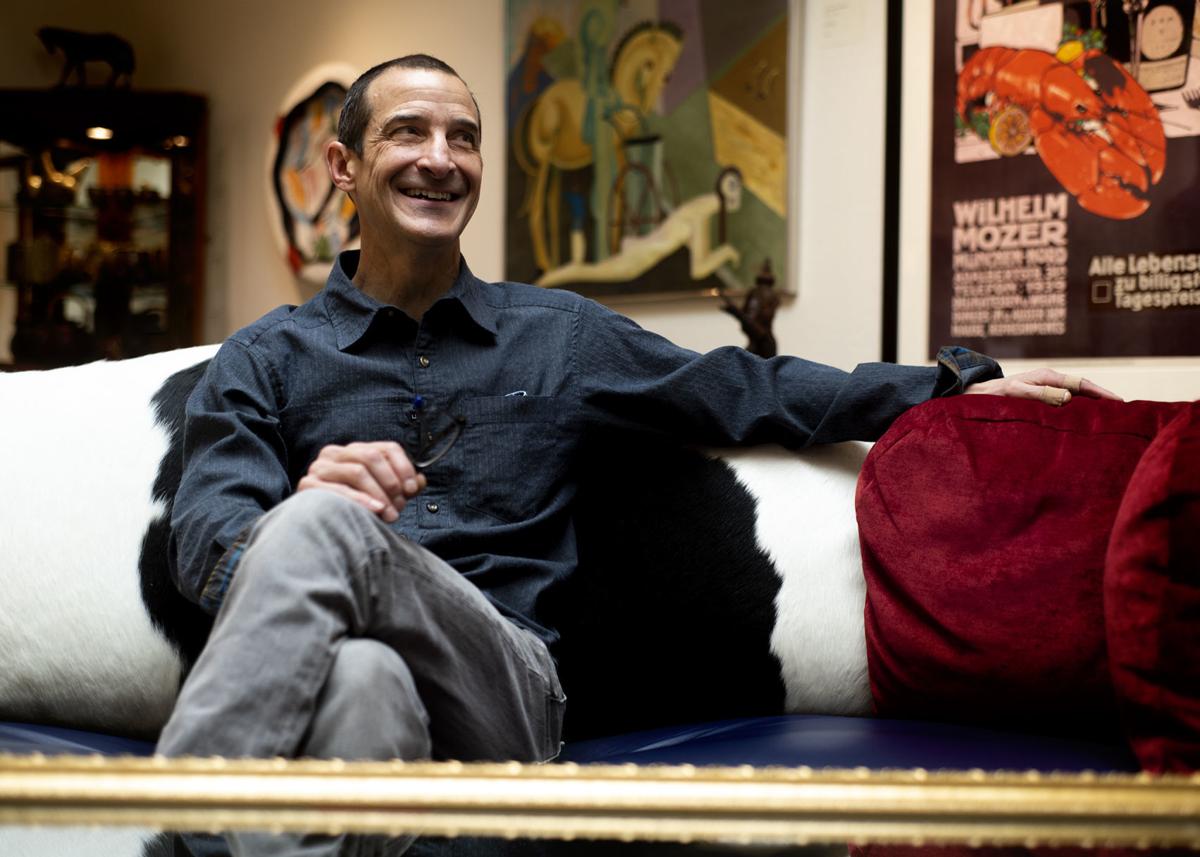 Brian Sippy, owner of the Radius Gallery building, met Timothy Gordon after moving to Missoula 16 years ago. The two began discussing the idea for Relic two years ago, though the coronavirus pandemic put a pause on the process of opening. 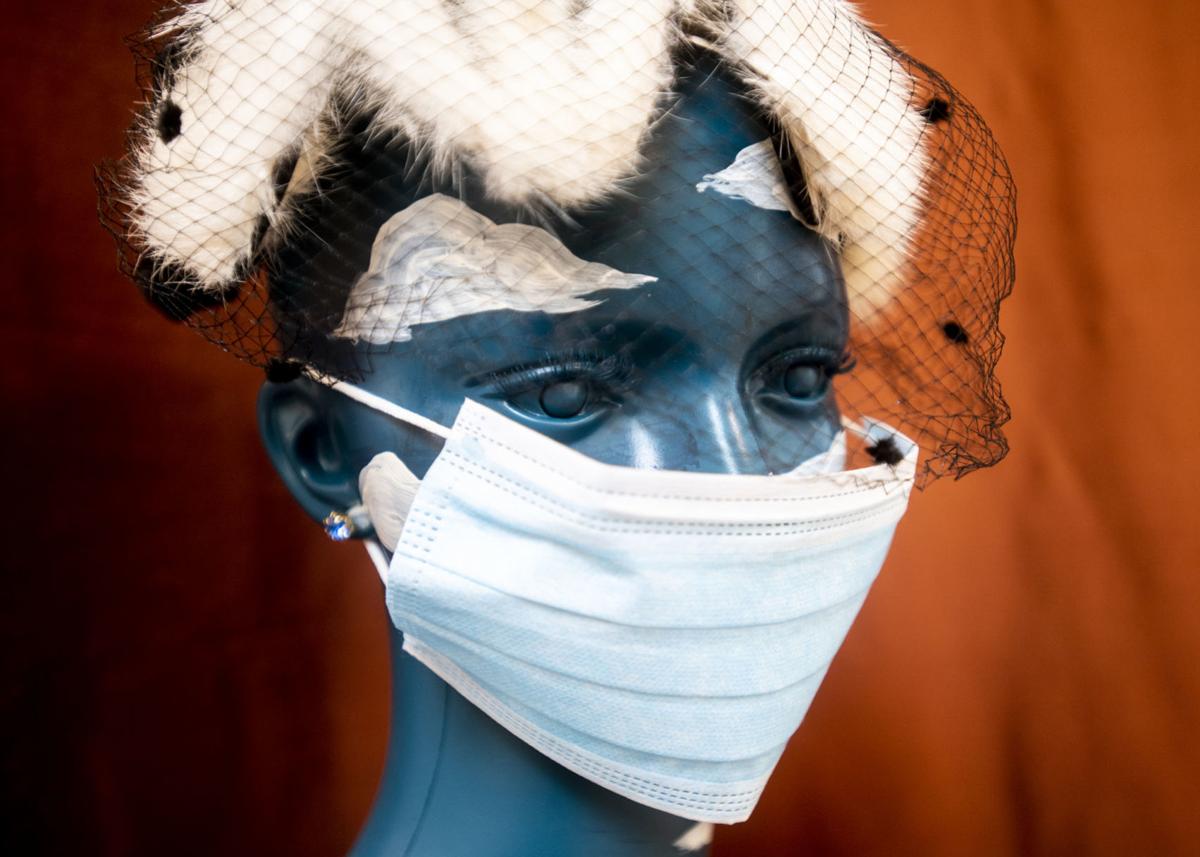 Some pieces in the gallery are regional while others are from faraway places. 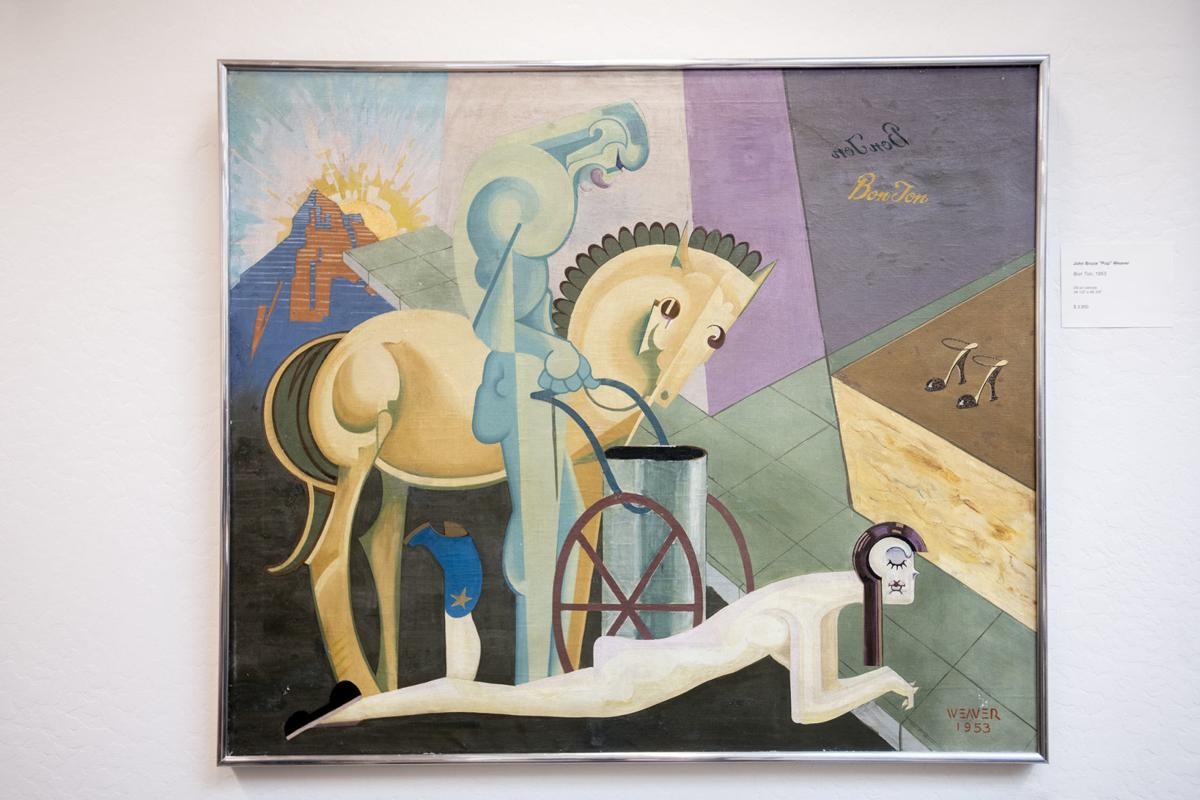 The Relic Gallery is deliberate and genuine in its attempt to be a cabinet of curiosities, where pieces of fine art conjure strange and inviting, dream-like juxtapositions with oddities that bear a deliberate edge.

Perhaps "cabinet" isn't the right word. It's more like a salon where "oh, wow," would be a typical response. This new business, from Timothy Gordon Appraisals and Bryan Sippy, is located on the second floor of the Radius Gallery, tucked toward the back where the contemporary art gives way to the strange and beautiful past.

Two couches are arranged in the middle of the room. One is an unshowy, early 20th century gray; the other an unpredictable combination of Holstein-Friesian black-and-white cowhide and other sections in red, blue and golden yellow. One can imagine sitting in it like a proper European salon, Sippy hopes, and discussing ideas and art, like a small Rembrandt etching. Or an 1846 painting from the West, once shown at the Smithsonian.

Or chatting about the lobster in the room — serving as a coffee table is a glass case with a mounted and preserved crustacean, estimated to be 100 years old at the age of its death in 1940 based on its length of more than 3 feet.

The gallery aims to include "a little bit of an edge, all the way from the masters to pop culture," Sippy said. All are older, emphasizing their background, with cards explaining just what it is you're looking at.

"There's a level of a story behind a story," Gordon said.

It's a collaboration between Gordon, a Missoula art appraiser featured on "Antiques Roadshow," and Sippy, the owner of the new Radius Gallery building at 120 N. Higgins Ave.

Gordon, a Missoula native, began buying and selling antiques at age 11. His company, Timothy Gordon Appraisals, has worked all over the world on projects such as Princess Diana's gown collection, the historical contents of Yellowstone National Park, the collections at Ronald Reagan's ranch, and museums around the United States.

Sippy, an eye surgeon, met Gordon not long after moving to Missoula 16 years ago. Outside of his medical work, he spent 10 years on the board of the Missoula Art Museum and saw various niches in the arts economy. After retiring, Sippy and his wife Karen built a modern two-story building at 120 N. Higgins to house the Radius and surround it with other art-related projects. Outside in the alley between the gallery and the Merc hotel, you can see rotating outdoor murals through their Allez! venture. Downstairs, he's opening Art Vault, an insured and state-of-the-art storage space where collectors can safely keep their items. That, too, is fulfilling a gap. They said other vaults in Montana are filled, leaving the nearest options in Seattle and Chicago.

The two began discussing Relic years ago, and the pandemic's pause on "Roadshow" and Sippy's new building made the timing right. About half are consignments, and the other half they purchased themselves. They're interested in seeing what emerges from private homes of Montanans — from this main business, Gordon gets emails every day and knows from experience that valuable items are often squirreled away.

Described in writing, it can seem somewhat random, but they said it's highly curated — if Gordon looks through a collection of 100 items, they'll talk it out and perhaps only pick one for Relic.

Some objects are rooted in faraway places. Others are regional, with the intention of providing buyers authentic antiques for their homes.

"That balance is a little bit of a juggle, but we definitely make it authentic and fun," Sippy said.

They also hope that they can help bring regional objects back to the area, or the opposite. They've reached out to museums about purchasing items that fit with their collections.

Radius Gallery regularly features ceramics, a popular and important contemporary art form in Montana, and Relic tries to complement that. There are pieces by historically important Montana modernist ceramicists, such as Rudy Autio, Frances Senska and David Shaner. Senska taught Autio. A lesser-known figure is represented: Pop Weaver, Autio's art teacher during his youth in Butte. They've tried to price things to include some items for entry-level collectors, much like Radius' does.

Then the quirkier items. An early 19th century ormolu clock, with a figure mounted on horseback, enclosed in a bell jar. Known as a "death clock," It was made using a technique to gild gold dependent on mercury that killed the craftspeople who made it, all explained on an information card. "I'm not going to hide it," Sippy said. "I'm going to say it: That's the coolest thing about it."

Some items are more recent pop culture items of the sort that you hope to find at garage sales but rarely do, if ever. In a nod to the local concert industry and the tourists it attracts, Gordon picked a selection of original 1960s concert posters, such as one for Big Brother and the Holding Company that predates the need to include Janis Joplin's name as the star attraction. Or a poster for a Lenny Bruce set at the Fillmore West that just happened to be his last performance.

"I can find a poster, but he can find the poster that's important to us and to other people," Sippy said. He proudly pointed out that the framed posters don't even bear tack marks.

Nearby, a woodcut print by the late Missoula artist Jay Rummel in his signature swirl of homegrown Montana psychedelia, is handsomely framed but doesn't hide small stains in the lower left corner, which, if you know that Rummel frequented bars and often bartered his work, are more of a character-adding feature than a flaw.

"It's all part of it. We're not hiding from any of that. In fact, we're owning it," Sippy said.

They're showing a range of photographs by Stan Healy, a former Missoulian staffer and city councilor who documented Missoula for decades. They've picked pieces that show his arranged, studio work and his boundary-pushing side, such as a figure pointing a pistol at the viewer.

A poster from the 1920s also gives a view into the weirder side of Montana. It advertises an appearance by a magician, Joseph Wesley Crowell, dressed up with a villainous goatee and pointy eyebrows that match his horns. "The devil his Satantic majesty is coming to town," the text reads.

The two found his obituary from the 1960s to supplement the interest level. "If you were to buy it, you would have a little bit of a story behind it," Sippy said.

Other historical and regional items are less confrontational. John Mix Stanley's oil painting on board, "Passing an Obstruction at Night Creek," from 1846, is an important piece of history.

Stanley was one of the painters sent westward to document what he saw, in this case, an expedition from Santa Fe, New Mexico, to San Diego, California. Much of his work was lost in two separate fires, lending this piece more value. Other pieces include an original-era photogravure of Dorothea Lange's iconic "Migrant Mother" portrait, shot during the Great Depression.

Back to the seance painting.

"Queen Zenobia," an 1883 portrait of a royal who ruled in what's now Syria, was allegedly painted during a seance by an incorporeal artist. (At Relic, it's credited to "An Unknown Spirit." It's accompanied by a typewriter account of the ceremony, performed at Lily Dale, a spiritualist camp in upstate New York that counted Arthur Conan Doyle among its visitors.

"The transcript of the seance is that a cloud descended in the room, and everybody was amongst the cloud, and when the cloud dissipated, the spirit had painted the painting," Gordon said.

He found one of Doyle's business cards to sell as well.

"We're offering things like that to the public, unique things you can't find anywhere else," he said, adding that "I love having the haunted painting in here."

The team of artists locked down their building on Murphy Street off West Broadway in May and have been transforming the space into a clay studio and gallery they hope to open to the public this fall.

Timothy Gordon is the curator for Relic, a new gallery space in Missoula. The gallery, located on the second floor of Radius, features pieces by renowned Montana artists such as Rudy Autio, Frances Senska and David Shaner.

The gallery is a collaboration between Timothy Gordon, a local art appraiser, and Brian Sippy, the owner of the Radius Gallery building.

Brian Sippy, owner of the Radius Gallery building, met Timothy Gordon after moving to Missoula 16 years ago. The two began discussing the idea for Relic two years ago, though the coronavirus pandemic put a pause on the process of opening.

Some pieces in the gallery are regional while others are from faraway places.