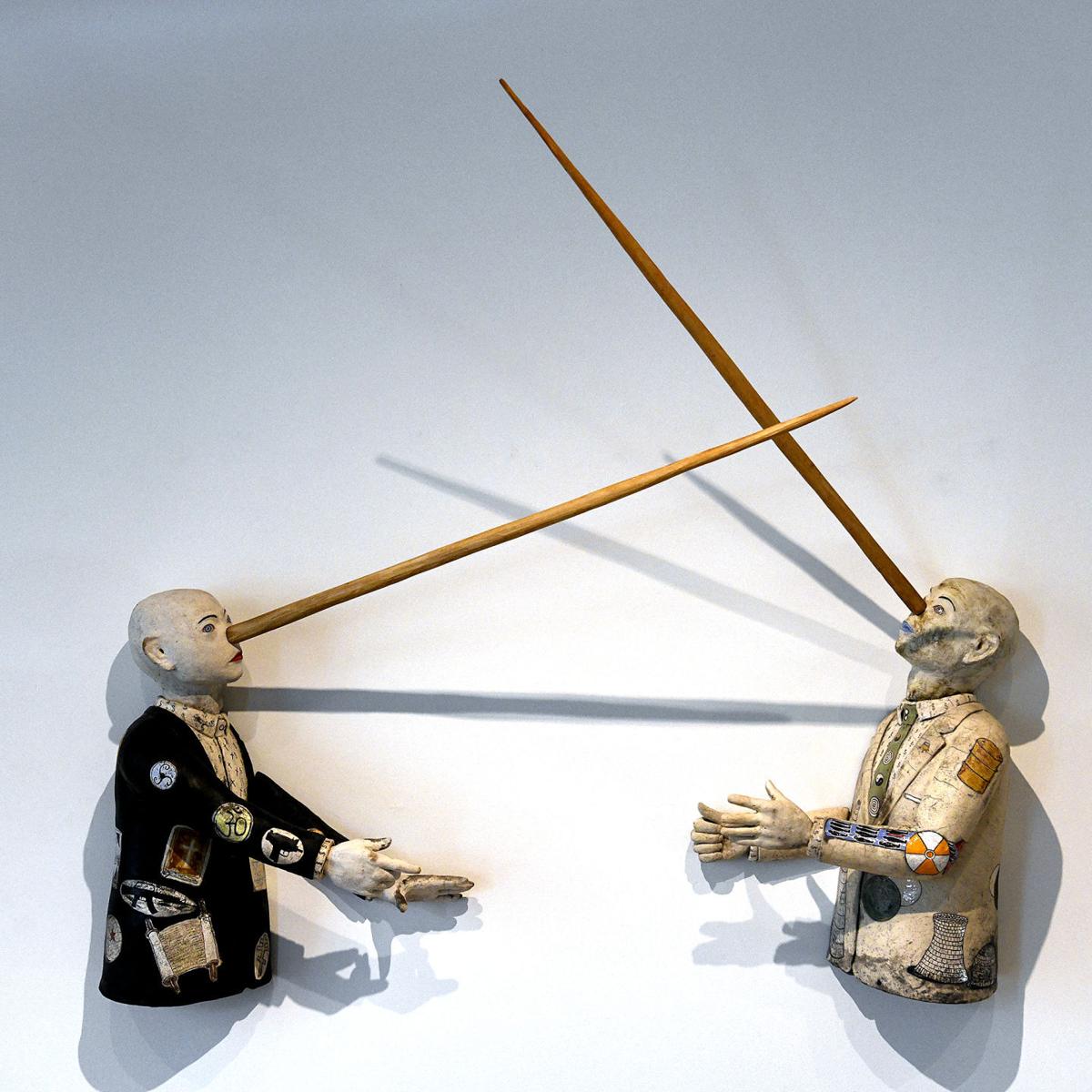 Stephen Braun, "Dueling Liars," Raku ceramics, 2019. The artist's exhibition, "Hindsight and Foresight are 20/20," is on display at the Missoula Art Museum. 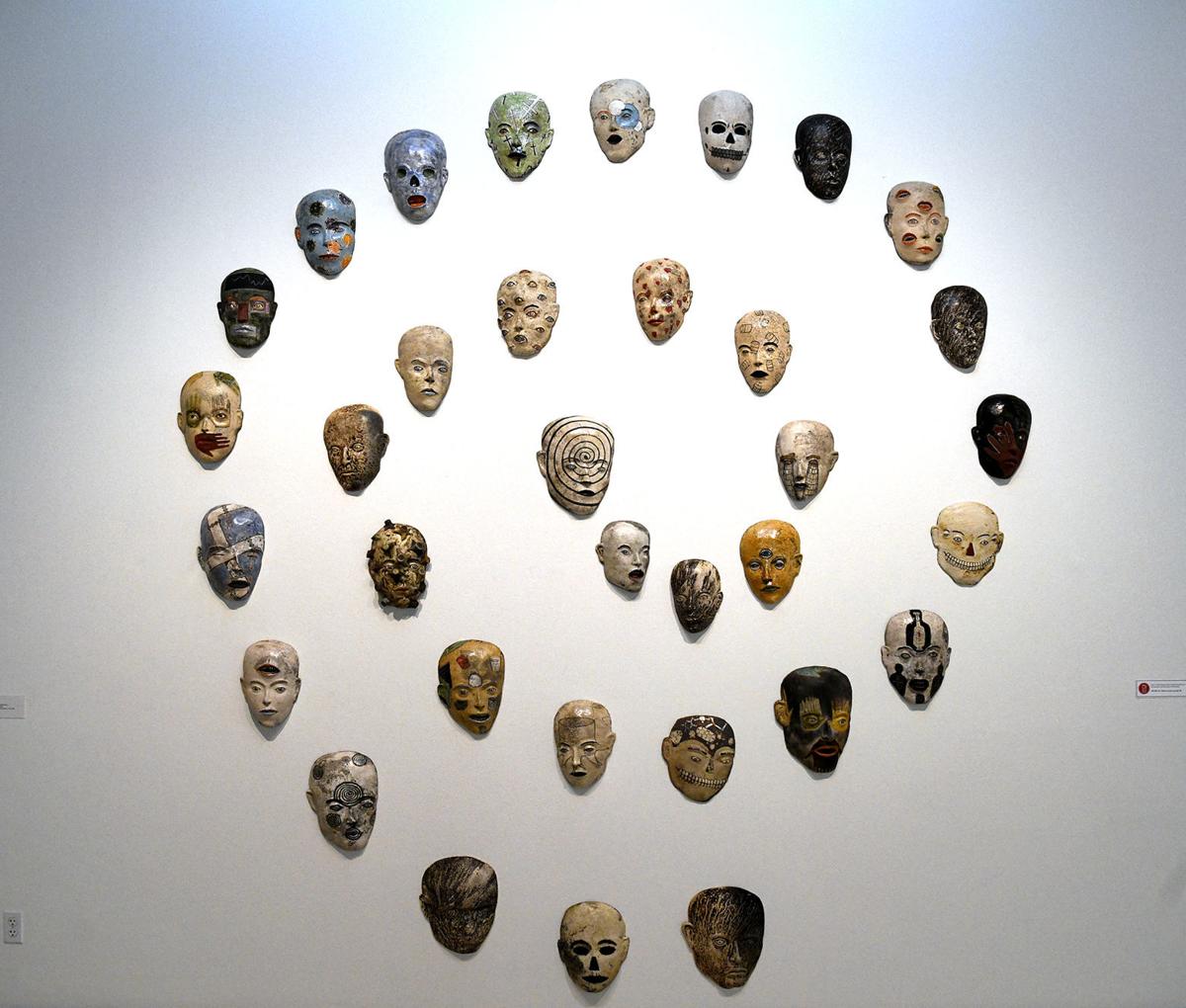 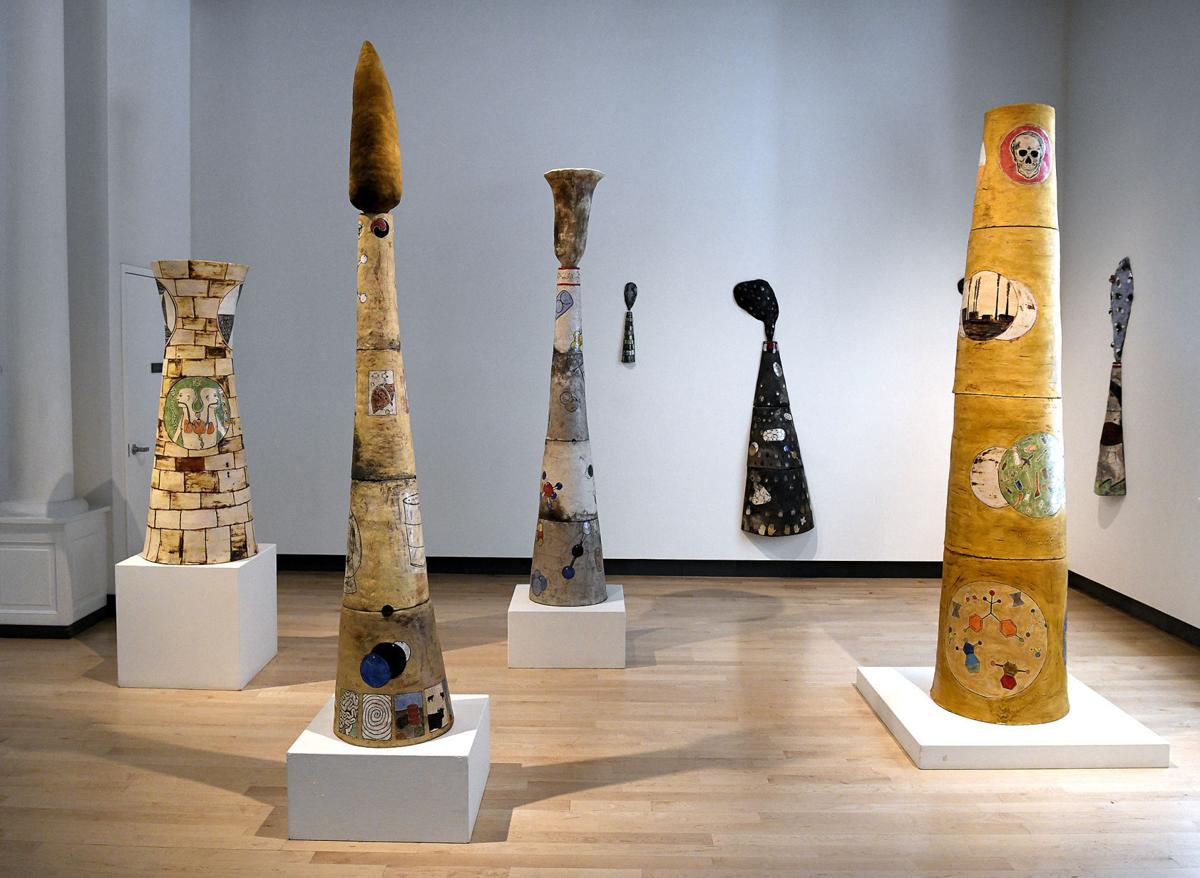 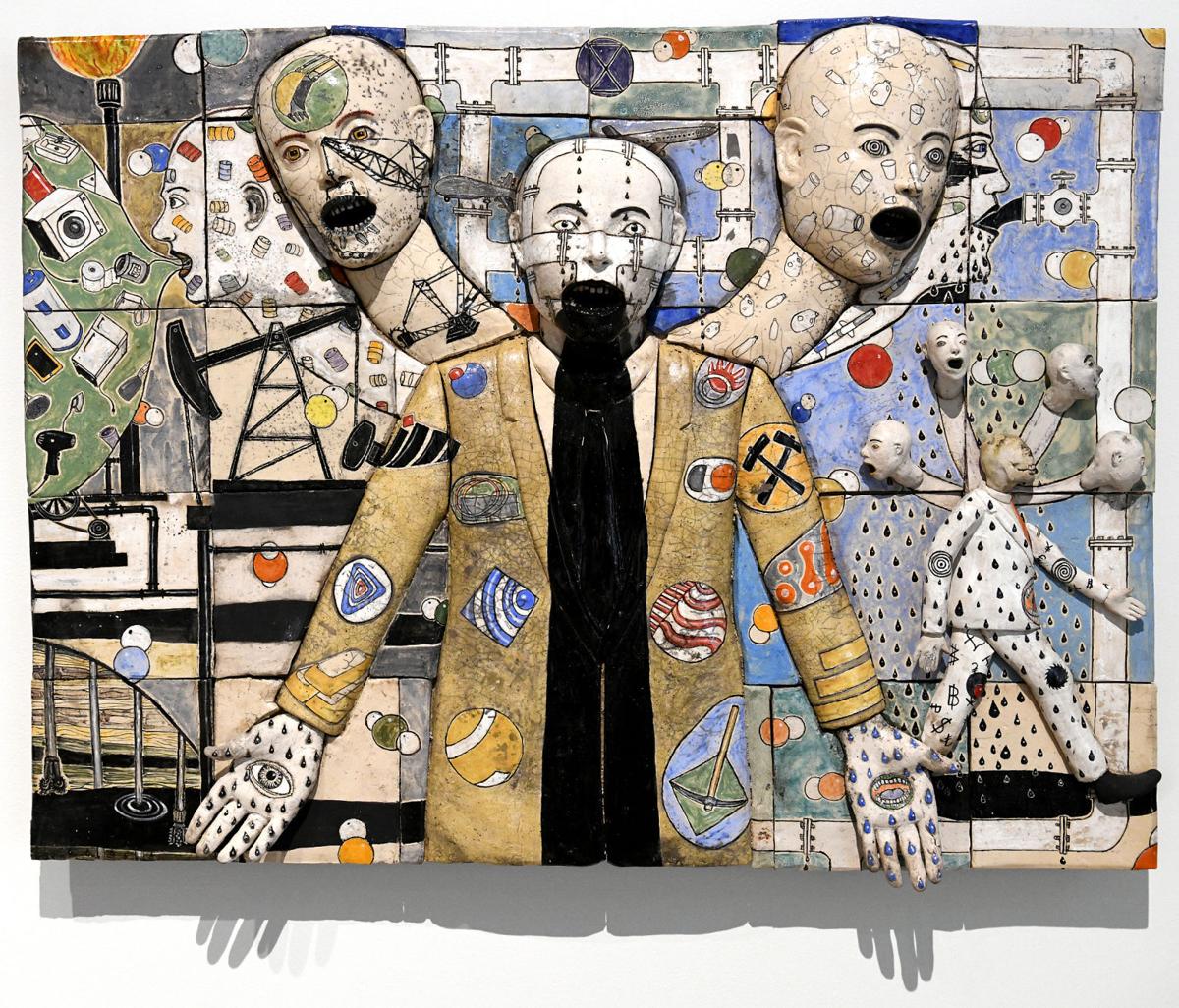 Taken in at once, Stephen Braun's exhibition, "Hindsight and Foresight are 20/20," poses "a pretty hard look at humanity," said Brandon Reintjes, the MAM's senior curator.

It's a daunting task to try to explore the tangled, interconnected systems that we rely on and threaten our existence in the form of clay and not, say, long-form essays.

The audience might seem more prepared for Braun's work now. It opened back at the start of March. A few weeks later, the world changed and the conversation moved more closely toward his themes.

"Now," Reintjes said, "you walk into the gallery and it kind of gives you a different sensation and feeling."

After the show opened, a pandemic exposed the cracks in the social and political fabric. On a daily basis, people have to consider how individual choices may directly affect their communities. They may have seen images showing how air quality visibly improved in Los Angeles during stay-at-home orders, when vehicles weren't filling the streets.

Braun's images of virus-like forms on human bodies, police brutality and white supremacists, an issue in his home base in the Flathead, seem to have flown off the surfaces of his sculptures directly into the news feeds.

These have been issues for a long time, of course. Braun, who lives outside of Whitefish, worked on these pieces for the course of several years at home and during an artist residency in Oregon.

In his artist statement, Braun says that he's "tried for many years to create change through environmental activism, legal challenges, and legislation. My art is just another form of activism."

His work presents an alternative, and more calming way, of thinking about those concerns than an anxiety-inducing morning scan of the New York Times homepage. Still, it can be "a little hard to have reality reflected back at you," Reintjes said, but he thinks Braun's work feels so unusual that you ask yourself whether you've seen anything quite like it before.

Based on written description alone, it might seem overwhelming, or overloaded with information, voices and imagery — a maelstrom that pulls the viewer down too many trails of thought as the eye moves around a sculpture that he's packed with symbols.

The natural and common response to the daily informational overload is shrug, deny or distract. Retreat and close the app. Braun’s work has the opposite effect. He uses a technique that gives his surfaces an aged patina that makes you think of time in longer terms that doesn't diminish the urgency of his subject matter. The balance of clear and cryptic references draw the reader further in.

He has a sense of humor, too. A series of four small figures, each with their head replaced by an object indicating a probable job field. One is a tree stump (“Stumpy,”) another a pile of tires (“Well A-Tired”), a colorful brick smokestack (“Well Stacked”) and a barrel of oil (“Motion”).

Their arms and legs are slack, giving them a sense of inanimate puppets put away in storage until they’re needed again.

The large installation of towers and stacks, made from separate pieces of fired clay and reinforced with Rebar, play a game with the viewer, too. The shapes and skilled construction feel inviting — the row of smaller ones hanging on the wall spit out little clouds like children’s book illustrations. The feeling of nostalgia is coated with the mildew of real life, though. Sooty color schemes and drawings of skulls, malformed humans, flocks of hands expelled with pollution, diagrams of molecules, a sphere filled with consumer waste.

One of the most ambiguous pieces is "Infinity," in which 34 mask-like faces form a large spiral on the wall. They're hairless, and seemingly genderless. Their surface imagery references Indigenous people, Christianity, death, logging, pollution. Others seem more neutral, with vivid textures that at times resemble tree-like forms or volcanic ash.

The central terminal point of the spiral is a white face, neutral expression, with a yet another spiral emanating from its forehead. We've been at this a long time, the arrangement of faces seems to suggest. Which person, or what kind of person, are you in this repeating cycle?

It's a lot to process. There’s too much to know. But maybe by quietly looking there are solutions, or maybe a temporary reprieve, and you’ll leave feeling galvanized to find one, or part of one. Braun, as he says in his statement, wants you to ask questions and not look away. But he’s not in the business of giving you answers.

“This is how I perceive our plight and look at where we are and the history of what got us here. Where do we want to go next? I do not know.”

Stephen Braun's exhibition, "Hindsight and Foresight are 20/20," is on view at the Missoula Art Museum. Hours are Tuesday-Saturday, 10 a.m.-5 p.m. Masks are required.

In the follow-up to his debut novel “An Absolutely Remarkable Thing,” Hank Green takes his cast of characters on an even bigger adventure and satisfyingly resolves deep mysteries set up in the first book.

Artist and writer Claire Compton has been spending time on the Moon-Randolph Homestead north of Missoula since spring, exploring death and decay through the Open AIR program.

Stephen Braun, "Dueling Liars," Raku ceramics, 2019. The artist's exhibition, "Hindsight and Foresight are 20/20," is on display at the Missoula Art Museum.